I tell you, the list of things to do with a dog never ends!  Last summer fellow Team Unruly member Sarah posted My Dog Smells Better Than Yours: An Introduction to K9 Nosework.  Nose Work is something I am very interested in.  It looks fun and I hear praise of confidence building whenever people talk about the sport.  So here I am, seven months after that post, with a day off of work and a few boxes I have been saving up for That Day! when I give this nosework game a try.

I have been in a whirlwind of training Molly and Perri.  Weave Poles, Pivoting, Picking Up a Spoon, Jump Handling, Platform Games, Dumbbell, Weave Poles, Tunnel Confidence, Leave It, Weave Poles...did I mention Weave Poles?  My poor Ein stares and watches.  Sometimes he approaches and tries to get involved, but then he retreats.  And when Perri starts her training for Obedience Skillbuilding 1 next Tuesday (we got a gold spot!!), all the training is going to be even more intense.  I do want to play nosework with Perri, she sure does need to build confidence, but for now this can be mine and Ein's game. 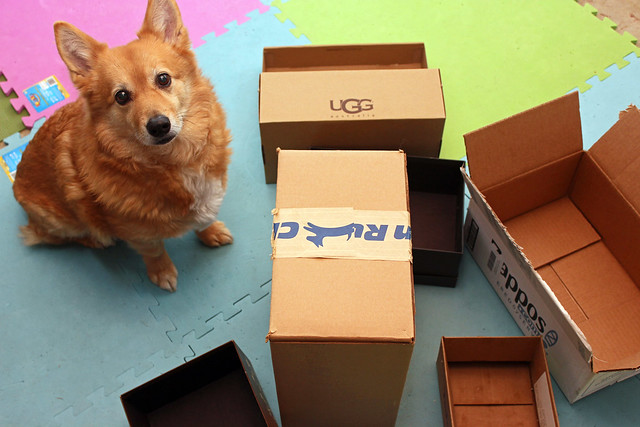 I took videos of the entire thing from beginning to end.  I have always loved taking training videos and photos, and that has only increased since the Fenzi Academy class.  If I make mistakes or look silly, that's not something I want to hide.  I wanted to capture Ein's beginning moments doing these "searches" and I am glad I did.  The blog suggests putting the dog in a separate room after a time while you put the food in the box, but for Ein's first time I wanted him to see what I was doing.  He was being challenged enough!  I accomplished that by asking him for sit-stays.  This video is eight minutes long, bless you if you watch it!

One thing that I was completely fascinated by was Ein's crystal clear lack of self confidence and dependence on me.  In fact, his releases were even completely tentative until we were further into our session.  If he wasn't sure about what he was doing, he would look at me.  I did encourage him along when he would look at me. (the blog also reminds us not to give verbal commands.)   A few times he tried to crawl into the boxes or do paw touches in the boxes (hello 101 Things to Do With a Box!).
At about 5:30 I set up a special challenge for him.  The hide box on it's side hidden by all the other boxes!  It proved to be a little too difficult, so I do move one out of his way.  It will be fun to see if we can progress to a challenge like that later!
I followed it up with the hide box in a more obvious place, to keep him feeling good.
After that I repeated the "box on the side" trick, only did not hide it quite as much.  He did better with that!  I was very proud of him for walking the entire way around the box pile to get it!

Next video!  This one is about six minutes long.

He is much bolder right from the start in this video!  I again did an easier version of the "box on its side" and he really puts some sniffing and effort into finding it, rather than looking to me for help.  Wow!
At 1:35 is interesting, he is sniffing sniffing then stops and looks at me.  As soon as I encourage him he flies around the pile and finds!  It's like he knew it was there but wanted to wait for my okay?
At 2:30 I give him a real challenge!  I hide the box away from the other boxes!  Poor Ein.  He does find it though.  (At 2:47 he climbs into the box.  Surely that will make me help him find the cheese!)
4:20 another tricksy away-from-the-pile hide!  This one he finds much quicker.
4:55 I love this one!  He goes right too it, whether he saw me place it or not - no staring at me for help.
5:55 This was a really good one, and our last one!  He seemed to be totally using his nose and working almost entirely on his own without looking at me.  He didn't go straight to the box (it was hidden beside the iPad), but sniffed some others, sniffed around and found it!

So, FUN!  I don't know if I will be video'ing every time we work on this and I will certainly be very busy starting next Tuesday but wow, I really enjoyed myself.  And I think that Ein did, too!  I am so committed to agility and obedience that I don't know if we would ever progress out of finding a box with cheese in it as a way to enjoy our day, but it certainly was (and will be!) a whole lot of fun either way!
Posted by dogbird daily at 1:05 PM