I haven't blogged about this past weekend's CPE Agility trial for a few reasons, but it is about time!  Perri used our three free entries that we won at the trial two weeks ago and we did all Level 1: two Standard runs and a Jumpers run.

Standard was first for her.   She was bug eyed at everything ringside and I thought for sure she would wilt pretty badly when we were out running.  I was screaming inside this was too much too fast because I am so afraid now of rushing her back into the ring - whether it is obedience, rally or agility.  But she did good!
I was proud of her for: leaving the ring crew alone and then committing to the dog walk, she could have easily run around it.  She followed me really well after that and didn't "drift" at all.  Sometimes Perri runs like a feather caught in the wind but she followed me through the tunnels and the jump 180's.   And I am especially proud of her for jumping through the tire jump (even though she refused it the first time!)  All in all, forwards progress.  No excessive cheerleading on my part, I feel I encouraged her but kept up my forward motion.  And good obstacle commitment and focus on her part!  She wasn't fast, but that is not what I was out to achieve.  That will come with time. 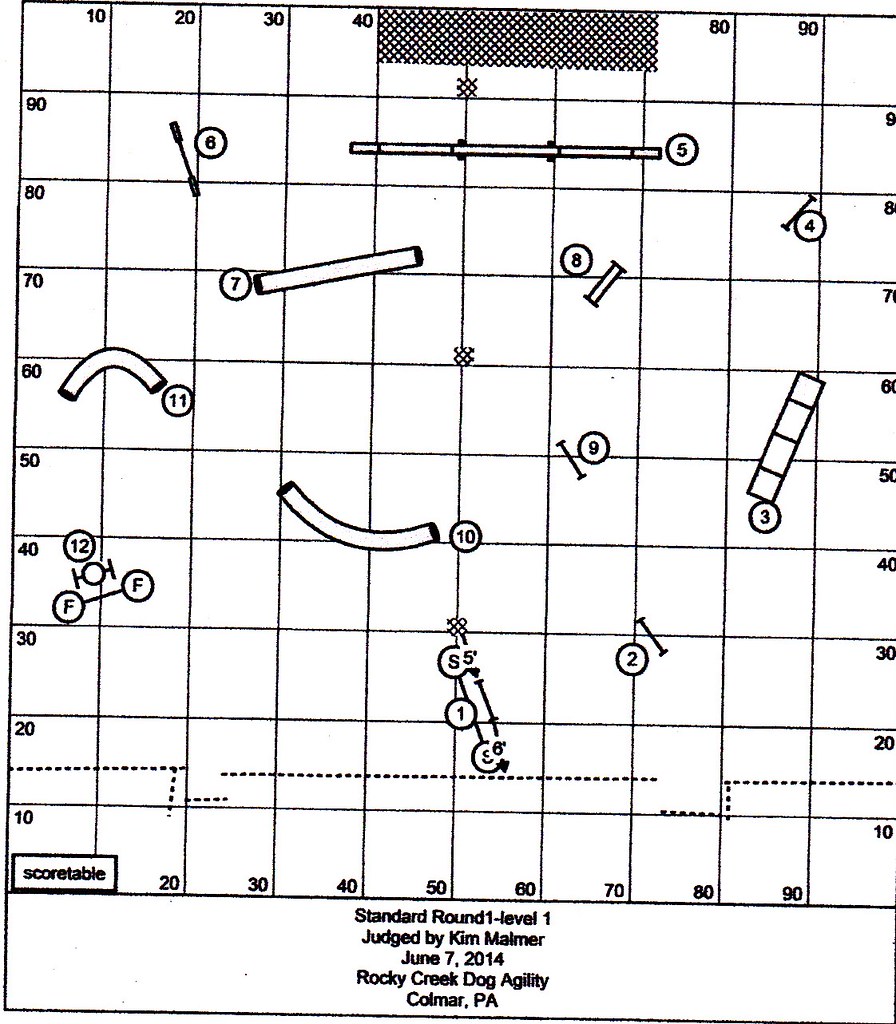 The next day we started with Jumpers Level 1.  Our videographer missed the first part of it, which is a shame because the first section of the course was her best.  She was really moving it and really running with me!  The wheels fell off when we ran by the double jump.  There was a pole in the way so I cannot see what actually happened, but I see my hand pointing at it.  It may be that Perri was truly just not feeling solid on that double jump in a trial situation.  Regardless, I brought her back around so to never stop my motion and sent her over it again.  My handling was completely disorganized on the serpentine because of this and I ended up trying a rear cross.  Perri is terrible horrible no good very bad at rear crosses because she has to keep moving while I stop.   She did it!   I am almost glad for our bobble because we got to enjoy a really cool personal victory. 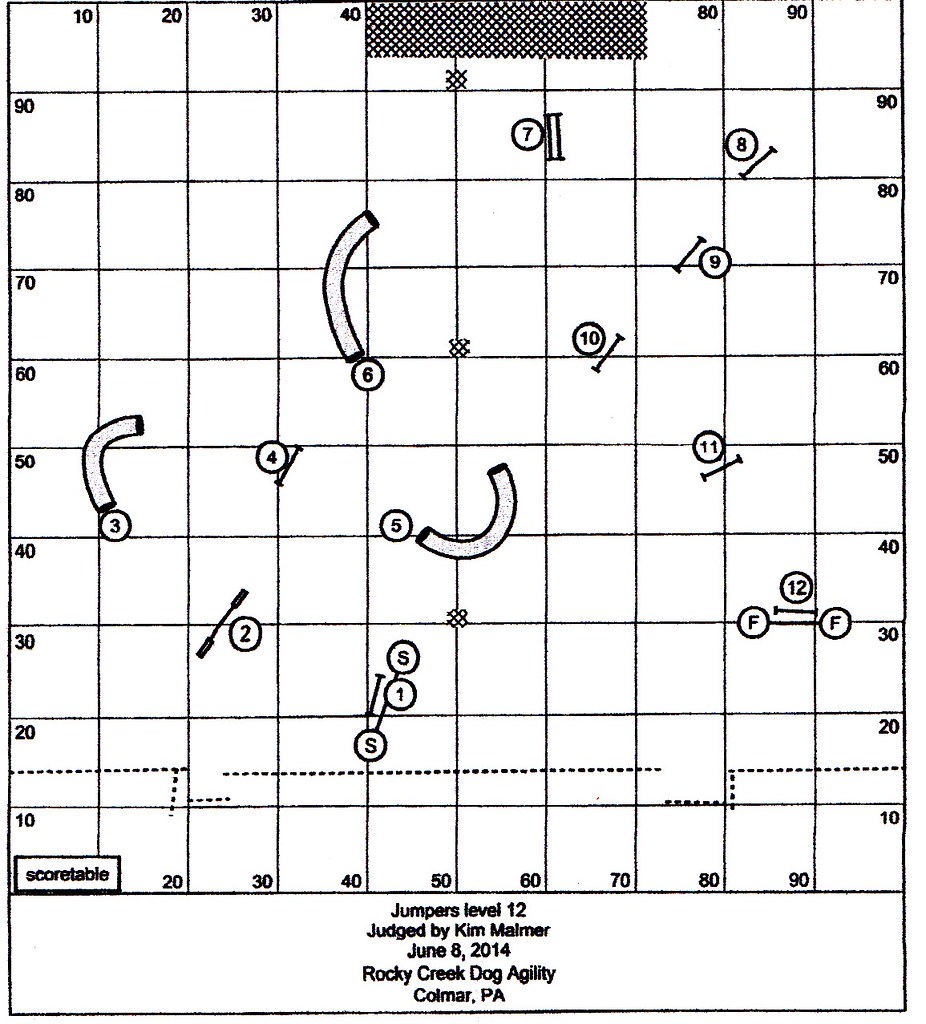 Last was Standard Level 1.  She was good and consistent, but again, not fast.  I ran around the backsides of tunnels to keep us both moving.  It was a long weekend, Perri gets mentally exhausted, and I wanted to make it a little easier for her since I was upping the environmental difficulty by running her at a trial.  She did really well and qualified as the only dog with a clean run in her height class!  We received many compliments for Perri's solid babydog performance. 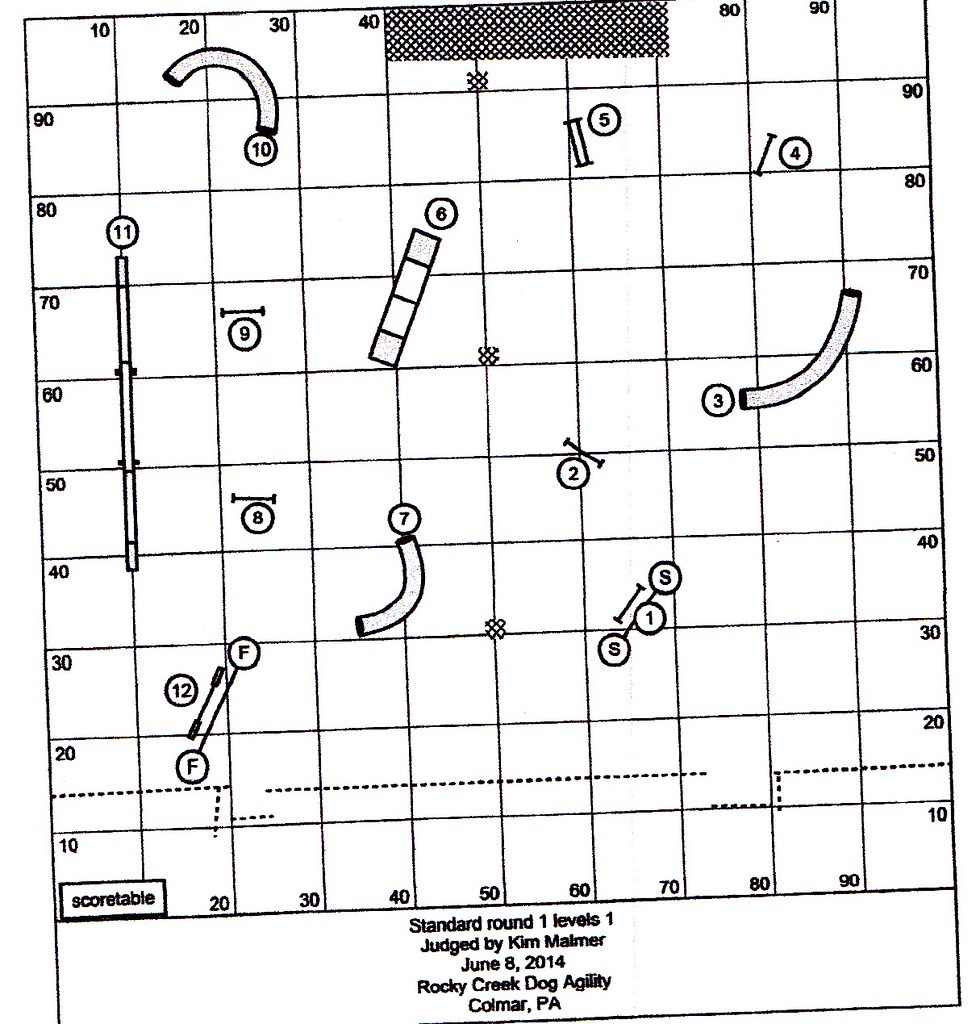 The two Standard Q's this weekend gave Perri her second agility title, the Level 1 Standard (CL1-R).  I had to again marvel on the contrast between her and Molly.  It took Molly three separate trials over a few months to earn that title.  Perri earned it in two days.  The other title, Level 1 Handler?  It took Molly 6 months to get that.  Molly's first Jumpers Q took 3 months and 4 trials to earn.   I don't think it is entirely fair to compare the two dogs' progress.  Molly is, after all, my first agility dog.  I rushed her to trial, I had no concept of foundation training, I had no idea how to handle an agility dog, let alone an inexperienced and impulsive pitbull.  Perri is benefiting from my small amount of experience, my newfound sensitivity to not rushing dogs to trial, and my ability to judge a little more accurately what a dog is ready for...and not ready for.  Still.  Two weeks, two agility titles.  Way to go, poodle! 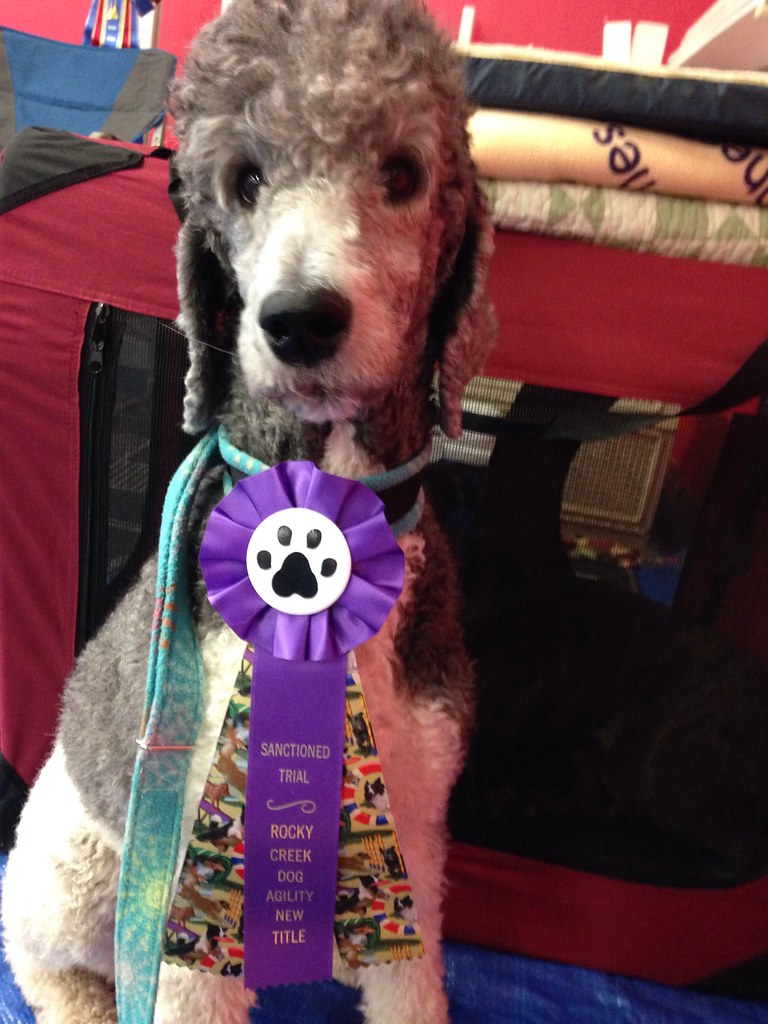 Jackpot Level 4 was first and hands down our best run of the weekend.  We had a grand time during the opening earning our points and when the buzzer sounded to signal the closing sequence (we had to choose one of the gambles), I chose to try the hardest gamble - the jump, teeter, tire.   No problem!  55 points and a Q! 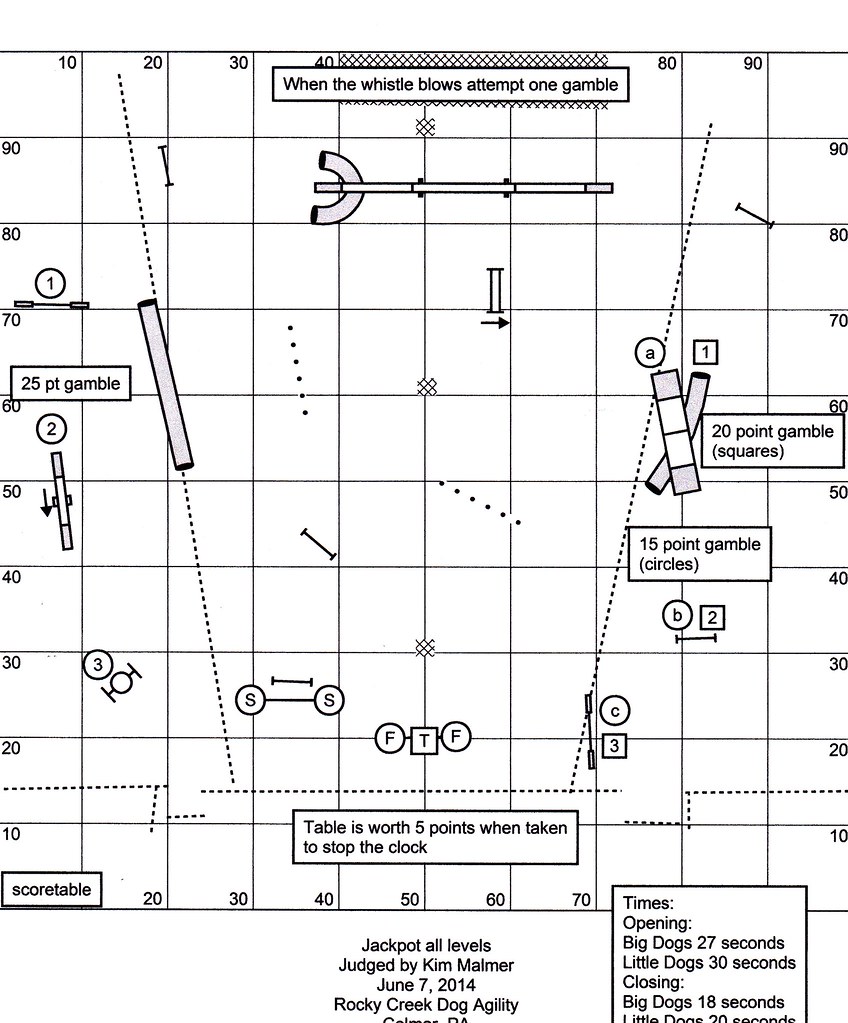 I don't have any of her two Standard runs on video.  We did two rounds of it next.  And I am glad that I don't.  They were more than horrible.  The first Round was a Q with time faults and an "other fault" for a weave pop.  I am trying so hard not to micromanage the weaves by staring, clapping and talking but it is hard for me.  There were stress behaviors on this run galore and we were overtime.   The second run was even worse.  I tried to get her charged up with a toy before our run but that just made her stressy and revved up.  The combination meant 40 faults including: a dropped bar, a weave pop, an off course and a blown dog walk.

We did Snooker next and the layout sort of forced me to use the Aframe twice in my opening.  Not what I like to see!  I would rather the weaves!   But we did it and we finished Snooker Level 4, with 40 points.  Her weaves were the best and fastest in this run, I wonder what I did right.  We did Left Bottom Red-Aframe-Right Upper Red-Aframe-Right Bottom Red-3 Tunnel-Close.   Again, stress behaviors after the Aframe.  Disconnected behavior and not driving to jumps.  This is probably because I baby the contact behavior and micromanage it despite my vows not to and I don't cue what I want next from her.  She ran out the 3 tunnel though it was right in front of her line: stress.  I sent her in the other end and proceeded with the close. 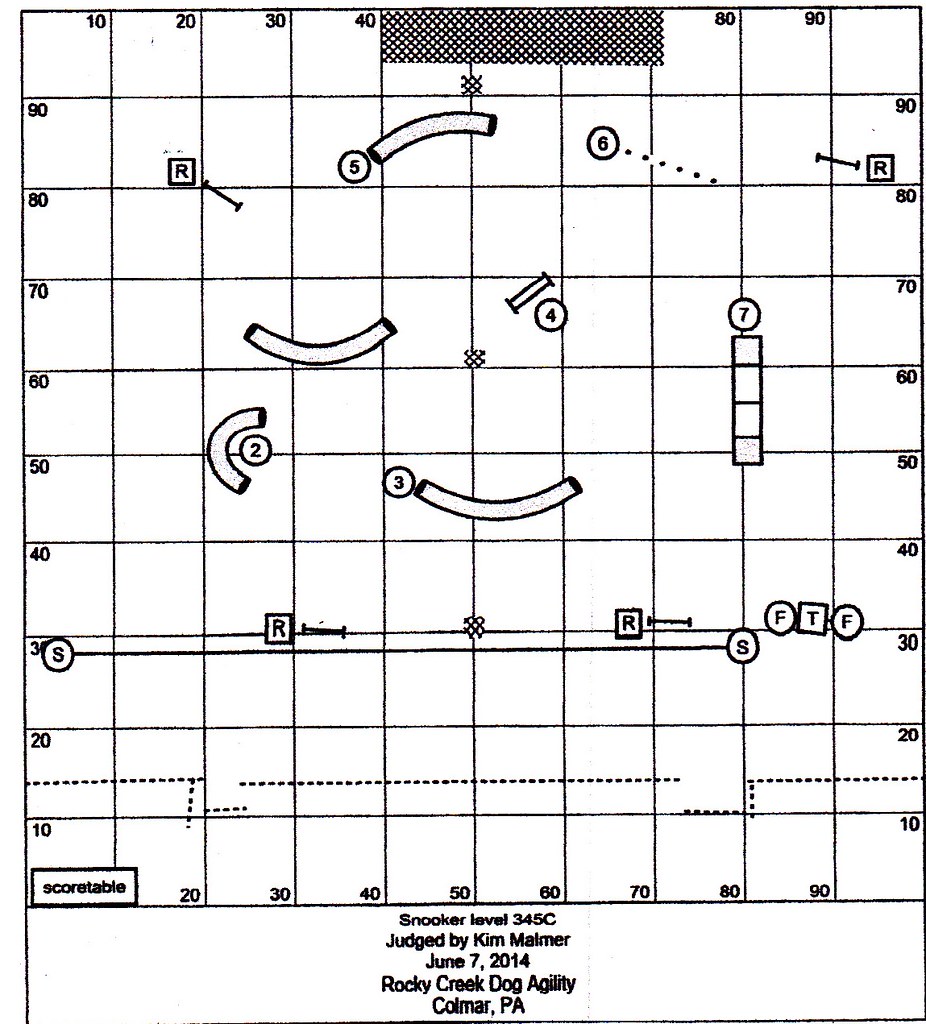 We got to end the day on a good note: Wildcard.  A quick course, a happy run and a good time!  This was our final Level 4 Wildcard Q so we are now in Level 5 of that as well!  She runs really well til after the weaves.  You can see she sort of stalls out when she finishes like, "WHEW!" and I encourage her to start running again.   One thing I am proud of - and you can't see it because of the pole, I was able to do a tunnel send after the second "Wildcard" and layer that 7-Jump in between us.  She took it, no bobbles! 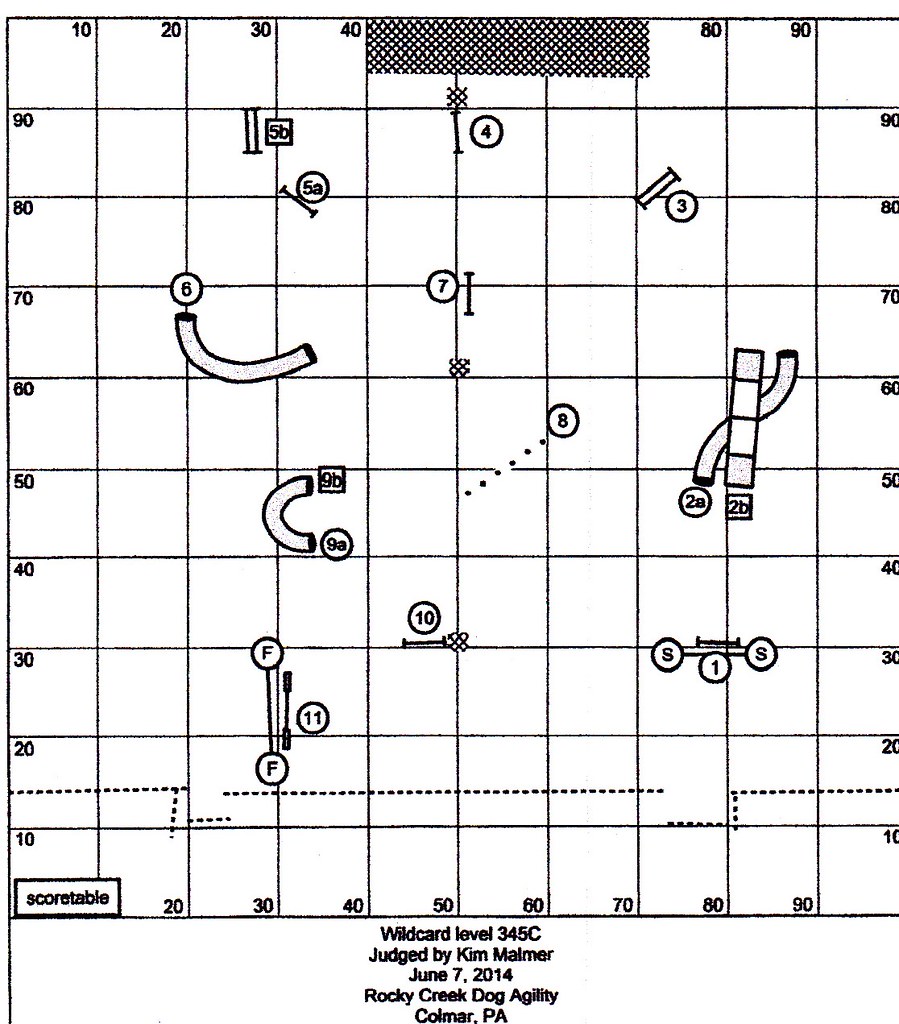 So, some good and bad.

Sunday started off with Jumpers Level 5.  We qualified with a dropped bar fault.  She was looking at the judge when I released her , I wish I had waited for her to be focused on me.  The run was nice, my goal was to be under time.


We had Colors Level 5 next.  Molly was really up and raring to go, there was some type of poodle mix in before her and she was having some reactivity arousal and general excitement!  I chose the Square course and I did not lead out.  I sent her from the second jump and stayed behind her and then sent her again to the third jump.  She was moving so fast and I did not turn hard enough into the correct end of the tunnel, so she got an off course.  My fault totally!  We ran the rest of the course super fast and I counted it as a victory!  NQ does not equal defeat!  Enthusiasm is what I want the most, and my dog did exactly what I told her to do - an off course! 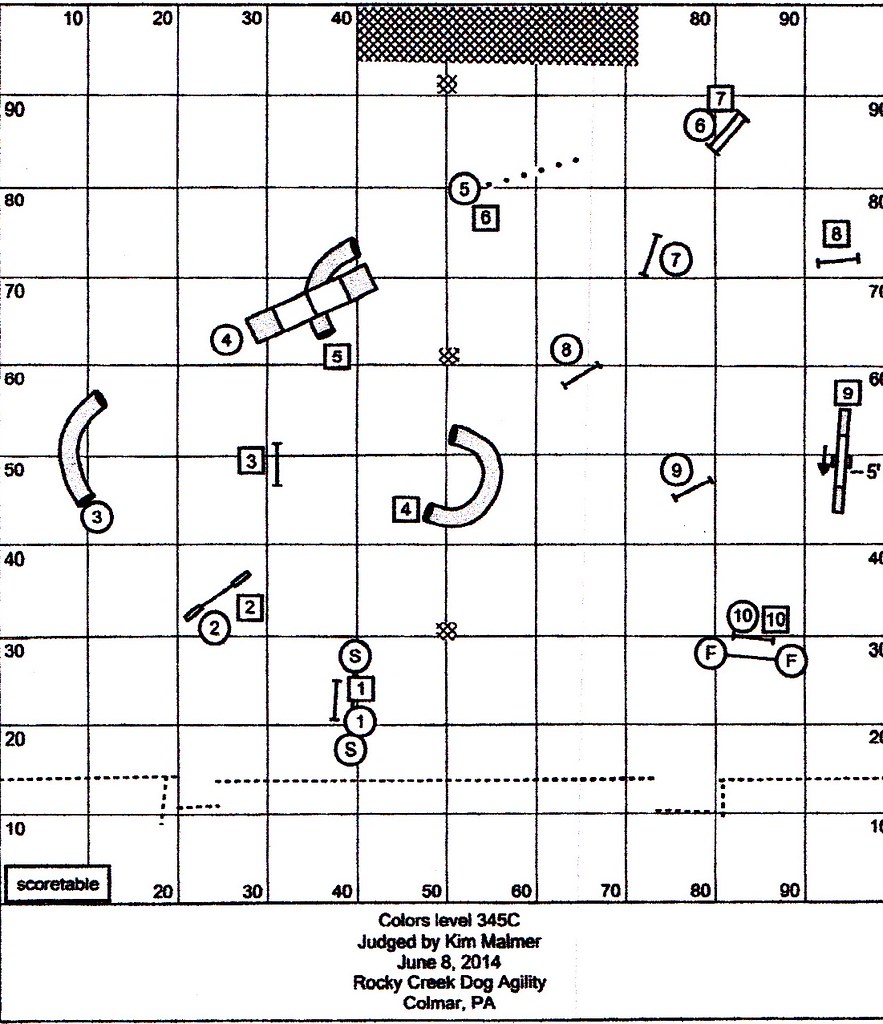 Standard was next.  Our first run started with a simple pinwheel, something Molly can eat for breakfast.  She instead took the first jump and started sneezing.  There had just been a clean up of pee in the ring, but I think it was stress.  We crawled through the course, we got a weave pole pop, we qualified.  But it felt hollow.   The second Standard was a mess.  Slow weaves, off course, blown dog walk.  Stress behaviors.

I felt pretty mopey for the rest of the day.  Sad.  We are quite a few trials in a row now of clear stress behaviors, of courses run overtime, of Molly being demotivated on the course.  Despite saying that I would try to trust Molly more (back in December!), I clearly am not.  In class when Molly gets on the dog walk I sprint to the other end of it and never look back at her - and she actually stops on the contact every time.  In a trial I tell her "easy!" "whoah!" as soon as she gets onto it.  Same with the Aframe.  I behaved myself and kept my mouth shut during the weave poles at this trial, but with mixed results.  Curbing my micromanagement habit is proving to be very difficult for me, but when I saw how I am clearly creating stress in my dog - it made me feel so small and sad.

I heard a competitor chatting with someone this weekend and overheard, "Once you take speed away you can never get it back."  I was emo-googling related blog posts and reading things about how you can really ruin an agility dog by trialing her too soon (and I very much did with Molly.  Not that I realized it at the time.)  I feel so terrified that our progress is dead ended and that Molly no longer enjoys agility quite so much as she used to - and it is all my fault.

But, onward and upward.  We will keep trying.  I will try to be more confident, I will try to "let go" and trust my dog.  But it is hard.  It is so so hard.
Posted by dogbird daily at 6:18 PM