On Saturday, Ein and I attended our annual Philly Area Corgi Group picnic.   The corgi picnic is one of the highlights of my year, every year.  There is the hot dog bobbing contest, there is the musical hoops contest, there is the silent auction of doggie and corgi items and there is lots of food and lots of corgis!  Ein and I never do the hot dog contest, because he has always been afraid to nose into the water for the hot dogs.  And the competition is stiff!  We have never stood a chance.  Musical hoops was always our game.  It is like musical chairs, except that everyone walks around a ring of hoops and when the music stops, you get your dog to sit in a hoop.   For Ein, who has always been good at heeling and sitting when I stop walking, this game was a cakewalk!  We have won it probably four times.

This year Ein had a hard time getting his rear end into the baby pool.  He woke up limping on his front leg and stiff in his rear, so I didn't think musical hoops was something that we should be doing.  All those years of going to our picnic and enjoying those two things above all else, and suddenly his hip dysplasia is sticking its ugly face in there, reminding me that my dog is not who he used to be.

I went back over to Ein's x-pen by myself and really felt like crying.  It might seem stupid to some.  But nine years of this dog, nine years of my little badass that nothing could stop.  My little scrapper who was picking fights with german shepherds at the dog park "just yesterday."  And suddenly he is old.  I am still learning how to deal with that.  My dog who could hike 12 miles over a boulder field is having trouble stepping into a baby pool.  Through some twist of fate my x-pen was next to a corgi and owner that I have seen coming to the picnic every year that I have been going.  Except this year, her dog's entire rear end was paralyzed because of degenerative myelopathy, a condition common in corgis.  He was her agility dog.  I have always noticed corgis on wheels, corgis in strollers, or corgis who were half lame at the picnic.  But not until this year, when my own dog is going lame, did I become hyper aware of what causes these wonderful dogs to be confined to a wheel cart or a stroller.

The end result was that while I enjoyed the picnic, it was a bittersweet day for me.  I enjoyed being my normal shutterbug self and taking 84 photos of all the picnic-goers (Click here to see the Flickr Album).  I enjoyed the food.  I enjoyed spending a day out with Ein.  But I allowed his mortality to make me feel sad.  I became worried that he may likely have degenerative myelopathy as well.  A friend of mine who recently lost her beloved doberman at only 7 years old to osteosarcoma told me that she regrets missing out on her dog's "old dog years."  That I will regret it if I continue to mourn Ein before he is even gone.  And she is right.

I am busy with the girl dogs.  I'm going in a million directions.  I feel like I have no time for Ein.  But a lot of that has been because Ein's recent grouping of diagnoses makes me feel so sad that every time I look at him, it is all that I can think about.

Another friend sent me an exercise peanut weeks ago.  I inflated it last night and we got to work and Ein had so much fun.  It is a new game, and it can be an every day thing.  So what if we are doing it to strengthen his wrecked hips.  He is having fun, and so I am having fun. 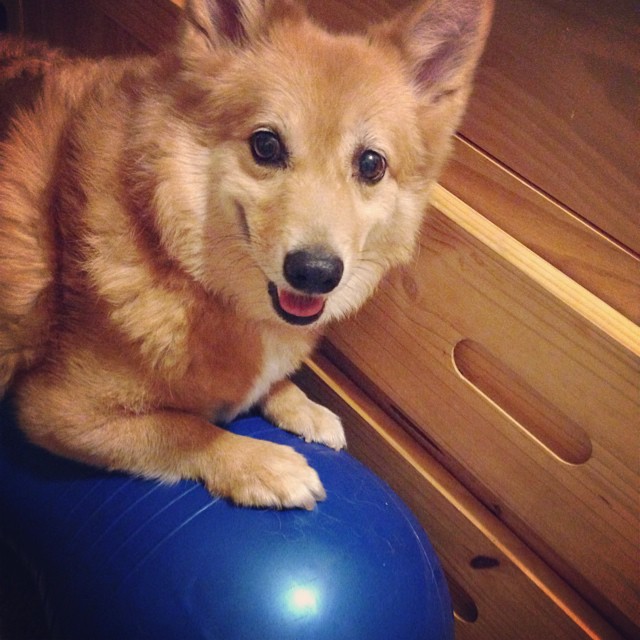 I must embrace this time.  I must enjoy it.  The last dog that I had pass away was 9 years old when he died.  He was fine one day and died overnight.  No warning, no old dog years.  He was just gone one morning when I woke up, he died in his sleep.  No exercise peanuts, no supplements, no cozy orthopedic dog beds and shorter walks.  He was just gone.  I haven't lost Ein to cancer, or a heart failure, or a tragic accident - I still have him.  He is still there and happy and he is still my boy, and just because his body is starting to deteriorate doesn't mean that we can't find new ways to enjoy our relationship.

Today I also went to Petsmart and bought him a lifejacket.  Swimming his fantastic exercise for the hips.  The dog is working his joints in the water, but there isn't any impact.  Ein has always loved swimming for his ball, but he tires easily and starts sinking into the water and coughing.  I have always chuckled a little over doggie life jackets.  My dogs can swim just fine, they don't need that stuff.   I used to think the same thing about training classes though, and look at me now.  When I watched my dog be able to swim out after his tennis balls for ... I don't even know how long, I lost track of time, I regretted not doing this sooner!   (In fact, I am probably going to get Perri a life jacket also.) 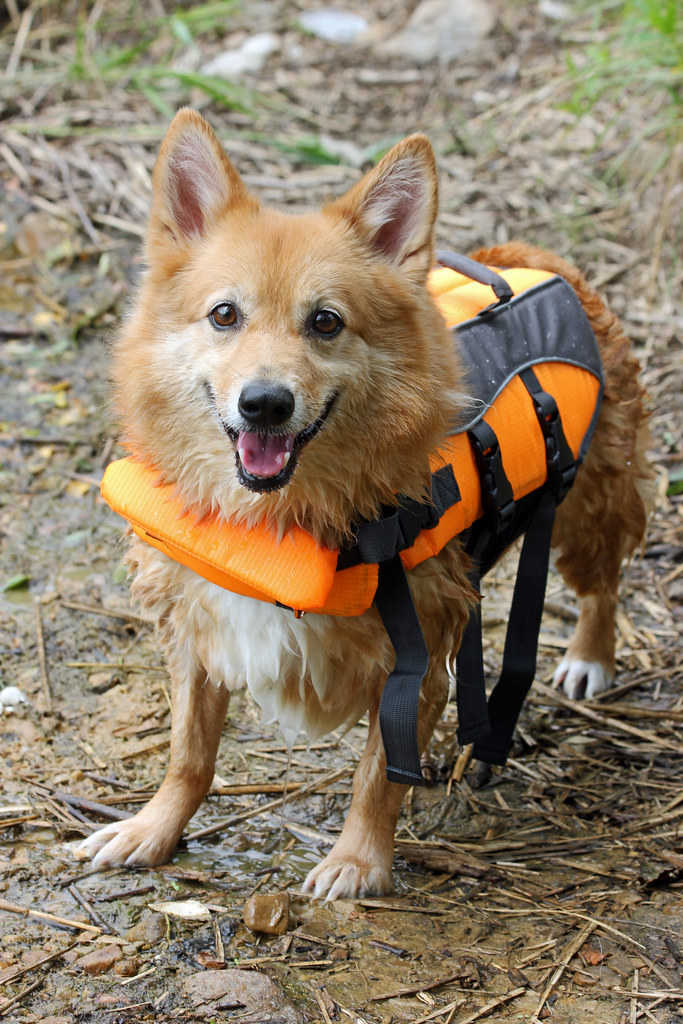 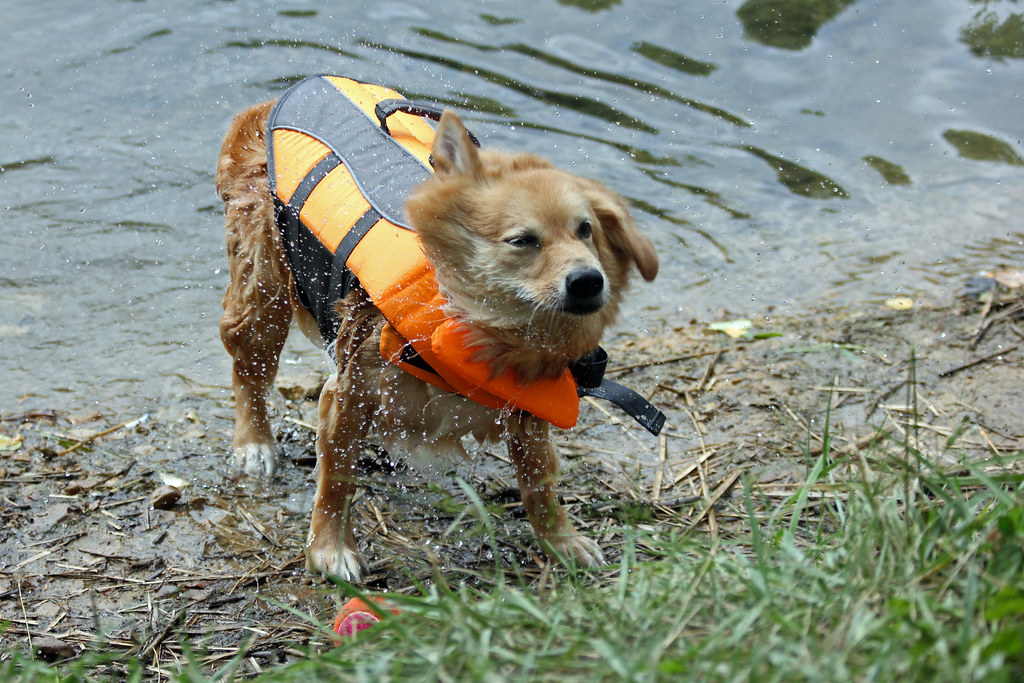 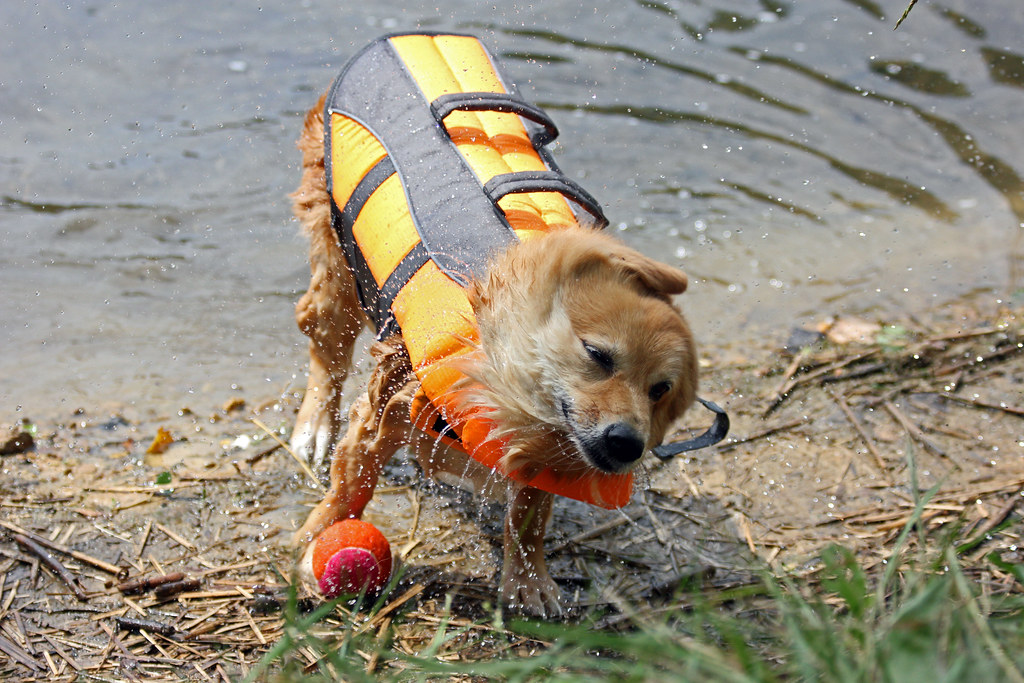 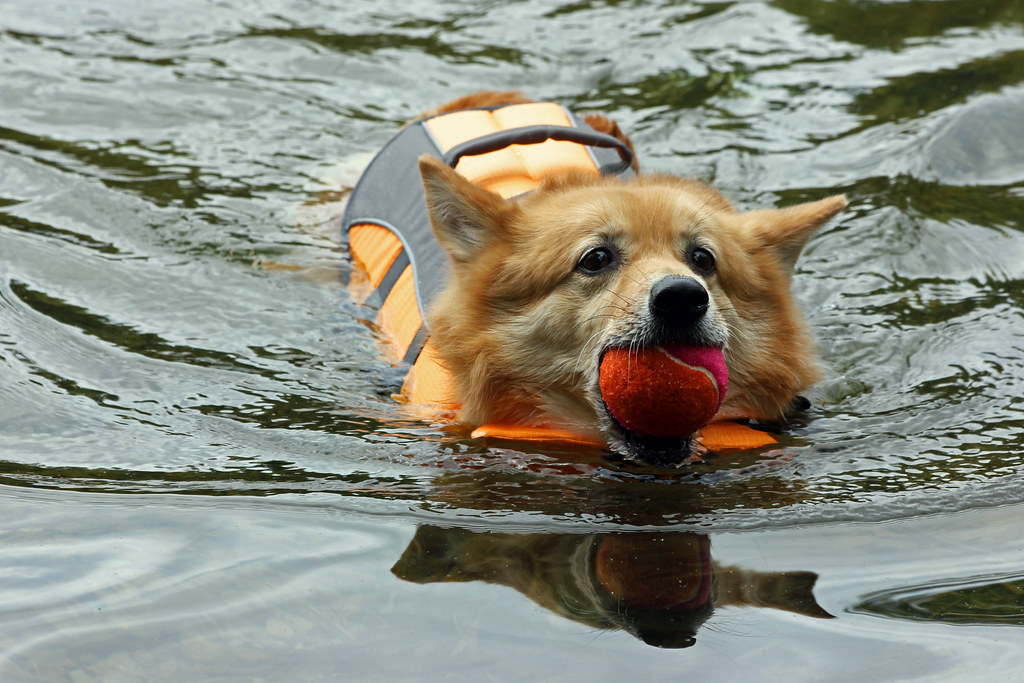 And if Ein can't be the musical hoops champion every year anymore, we are going to have to start training towards being the hot dog bobbing champions!  I think that he will be a fast learner.
Posted by dogbird daily at 6:04 PM