I see probably hundreds of homeless dogs across my Facebook feed per year.  It makes me feel powerless.  As I have started trialing more, I have started transporting less.  In fact, I don't think I have even done a single rescue transport this year.  Vito was my last foster dog and that was definitely last year.

And I have a confession to make.  I love senior dogs.  If it was not for my Husband With Common Sense I would probably have two oldies hanging out on my couch until their time ran out at all times.  So when a local rescue that I love posted that they needed a Forever Foster for a senior golden mix named Heaven with terrible hips, I felt those familiar feelings.  Those "I have got to foster this dog" feelings.  I haven't been this obsessed with a dog since Vito. 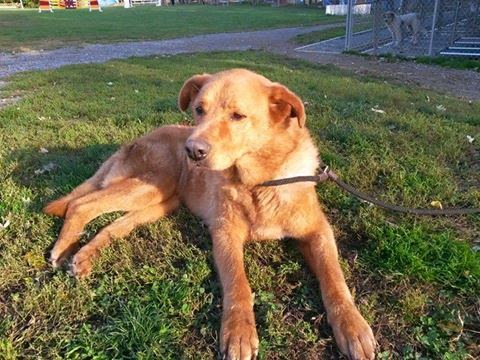 All I know is that a vet said that Heaven is 10, maybe older.  She has terrible hips.  She lived with an elderly couple and was fairly neglected, before being turned over to a kill shelter when her owners could no longer care for themselves, much less her.  She became very depressed and developed a UTI.  She was transported to Pennsylvania.  Heaven has continued to be depressed by the kennel environment and this is apparently a very common condition for senior rescue pets (though certainly not exclusive to their age group.)

My mind went absolutely wild.  The things we could do to work on her rear end strength.  Her confidence.  Her comfort level.  She would have a totally stable routine at my home.  Soft couches, soft beds.  I begged and begged Vince until he said...not yes, but the sought after "Not NO."  I emailed the rescue for more information.

And then later today I saw a comment on Heaven's original thread - she was meeting with a possible foster tonight.  And another commenter was also interested in stepping up.  And that all made me feel so happy for her.  And so grateful for this rescue and their network of people who might open up their homes and hearts to a senior dog that needs them.  I love that.

I felt a little relieved that Heaven had (probably) found a foster.  And if not, they have my e-mail.  I also felt a little sad.  I would love to do "retirement fostering."  And I will, someday.  Right now with three dogs it would probably be exhausting to extend myself to give a fourth the love and attention that she needs.  I would certainly manage.

I always think of Someday.  Someday I might get a border collie or english springer puppy from a Real Breeder who Cares About Their Dogs.  But that someday also includes rescue dogs.  It has to.  And I hope that those rescue dogs are semi-long term senior dogs who just need a couch to snuggle into after a not so awesome life.  I might not be moving animals into "Forever Homes", I might not be saving a lot of lives.  But I might be making a difference in a few old dog's lives, and that would make me very, very happy.
Posted by dogbird daily at 7:30 PM