Last agility trial of the year!  It was absolutely soothing to enjoy a whole weekend of agility at a nice venue after the hectic Christmas holiday.   There was a potluck breakfast/lunch so plenty of yummy food, this venue is not cramped for crating room so we were able to have a nice area to relax super close to the ring, and judge Lisa Lucas is a gift to the sport of agility.  She loves agility and wants all of the teams to be successful and enjoy their time in the ring, and it shows.

Saturday started with Fullhouse, with only Molly entered in that.  No video and it is a shame.  We racked up a Q with 32 points of wild craziness, the highlights of which are Molly sliding sideways on her shoulder out of her first tunnel and the judge telling me she is a "bullet" and "flying brick".  Truth and truth!
Next was Standard and Molly got a try at that.  I got so far behind her for the Aframe that she stopped at the top and dove off.  We got an off course shortly after (the tunnel end that she takes is the wrong end, not enough deceleration on my part!)  She missed her weave entry but had nice drive and footwork through and we finished the course nicely.  It was actually a pretty positive time in there for us and I tried to stay upbeat and not stress Molly out.

Perri also did Standard (Level 3) and had a beautiful clean run with some time wasted on a missed weave entry.  It was a tough entry, and there was a support beam between me and her going over the jump leading to the weaves, so that increased the challenge.

Last of the day was Perri running Snooker Level 2.  The course did not have a lot of "smooth" options available.  The path to the Aframe after the first red was not a great approach so I front crossed to push her into a better line.  We did a few jump wraps and front crosses in the opening and Perri was a great sport - we Q'd all the way through the closing with 44 points.  Onward, to Level 3 Snooker!

Sunday started with Perri only in Jumpers Level 3.  We got an off course right in the beginning, and it was due to my forward motion - I never even considered the tunnel that Perri did!   The rest of the course was fine and I was very proud of Perri for doing a pinwheel and staying Up! (pinwheels are sort of demotivating for her.)  We qualified since you are allowed an off course in Level 3, yay!

Next was Molly only in Wildcard Level 5.  Wildcard is the only game class that we are not finished with in Level 5 so I was happy to get a Q in this today!  I ran flat out on the Aframe and sure enough, Molly ran over it nicely all the way to the bottom.  Weaves were not great, I feel a little sad about that.  She got distracted by the judge calling our Wildcards and stressed down, and also a lot of useless chatter on my part instead of just cue-ing the poles.  Better next time...

Jackpot (non traditional) was next with both dogs running.  Whew I don't love running them both in the same class, but it may be a fact of life in the future!  It was "Tall to Small", so Perri was first.  I had some major Q-Brain because qualifying in Jackpot meant finishing Level 2 entirely.  Thankfully it didn't make me too stupid and we qualified with 52 points!  It was point collection in the opening, and "a tunnel and two separate bar jumps and nothing else" in the closing.  Simple, but I have messed up very simple non traditionals in the past!

Molly's turn was soon after and she qualified as well with 54 points.  I tried and failed with the weave poles, disappointed in myself there.  The first approach wasn't bad but I did not decelerate at all, and the second approach was just ridiculous with arm flailing.  Ah well.

We finished the day with both dogs running in Standard.  And....

Only our second Level 5 Standard Q this year....

Molly ran clean in Standard!!  I was in the clouds!  There were a few tunnel discriminations, one pretty nasty but I remembered to decel and handle her.  I did two front crosses with Molly, which pushes me out of my comfort zone - very necessary!  I still panicked and called her to me with a "here" as I did the cross.  I hate that I do it but it is a low confidence thing on my part - poor Molly, she is a good sport.  The dogwalk I hands down managed, shamefully or shamelessly.  No "easy", no "whoah" but I told her she was a good girl and she wagged her tail and I told her "now look here" and shook my hand as I jogged to the bottom and she stayed on.  Ugh!  The A-frame I made myself run run run, I didn't even look at her and that was so hard.  It was hard not to fall into the micromanaging trap and do instead what has been working well for my dog.  Another nice clean run to the bottom I am told.  I wouldn't know, I didn't look at her.  I just ran and finished handling the sequence and could have fainted from joy to see that rare Q next to her name on the results sheet.

And I was beginning to think we lost our ability to qualify in Standard altogether!  Eight more Qs for the C-ATCH (and one Wildcard Q...)

Perri finished out our weekend with a beautiful Standard Level 3 run other than some slowness and nervousness on the teeter (signs of a tired poodle!), but still 15 seconds under SCT.

So wow.   I can't say this for sure but I don't think I have had a day yet where both of my dogs had all Qs all day - 6/6 today!  It felt great to finish out the year with Molly earning a Standard Q and Perri finishing Level 2. 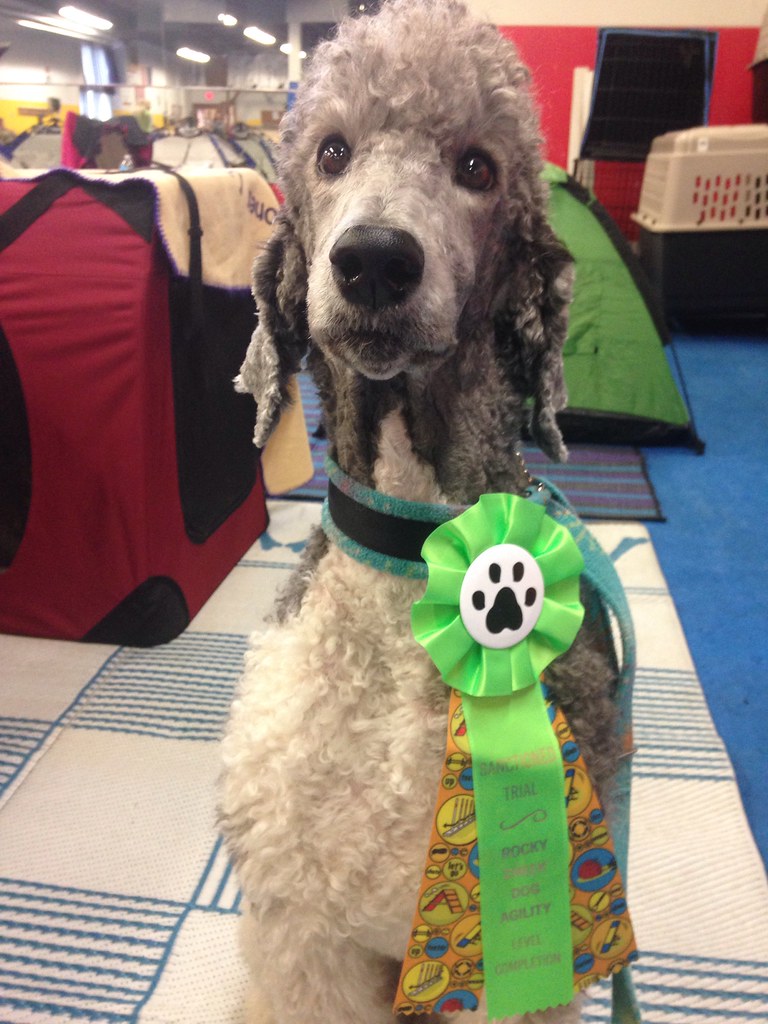 Posted by dogbird daily at 4:23 PM