Found a Geocache and Some Kittens ...

I got off of work early because we were slow today and so Perri and I went out to the River Trail for a walk and some geocaching.  We found four caches and walked about a mile, returned to the car.  I got some coffee to warm up and set out to drive to a section of the river trail a few miles away where there were more geocaches.  That was the plan.  The plan was derailed because I stopped at Ganshahawny Park on our way there. 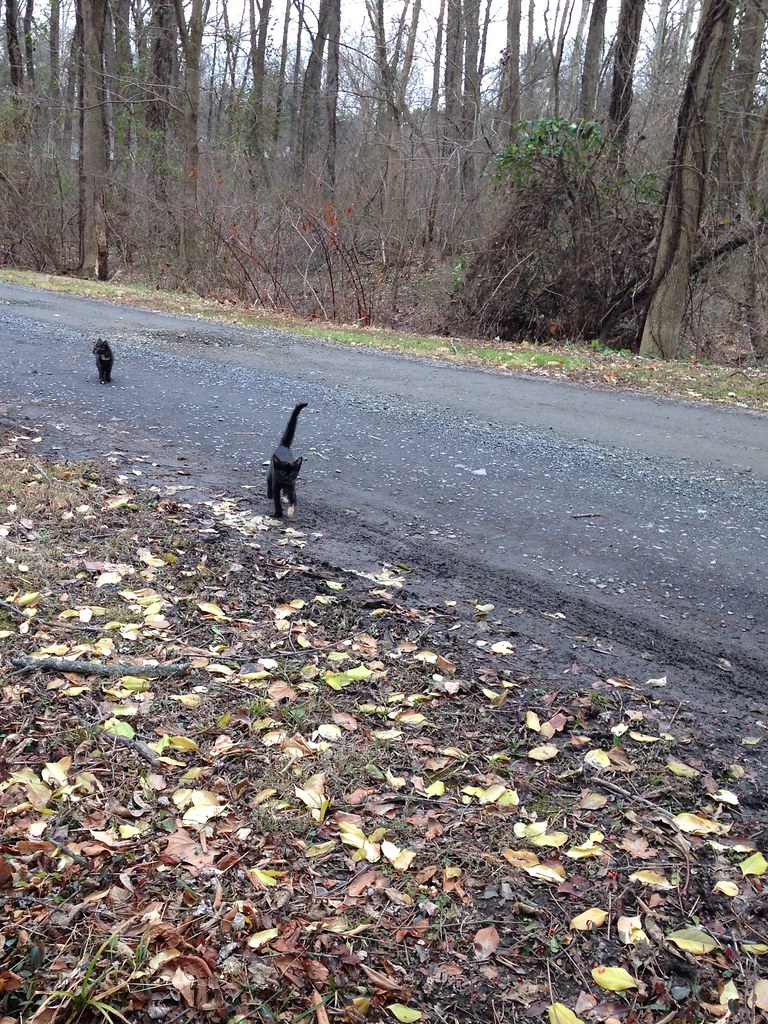 We stopped for this geocache.  It was about 250 feet from the car, so I left Perri behind to go grab it.  I was almost at Ground Zero when I heard little tiny meows.  I turned to see two tortiseshell kittens running towards me, crying at the top of their little lungs.  I laughed and said hello to them.  I found the geocache.  When I knelt down to sign the log they were all over me, crying and pressing into me.  They were shivering, and hard.  And since they were very much attracted to me and not afraid of me, it was absolutely obvious that they would be coming with me. 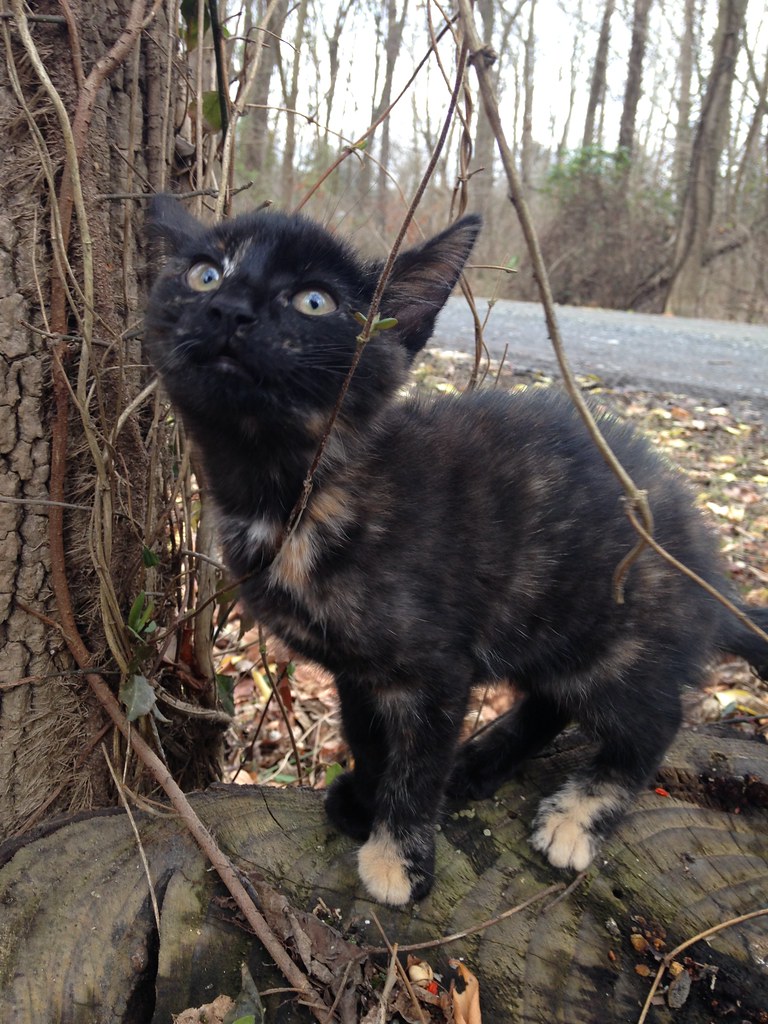 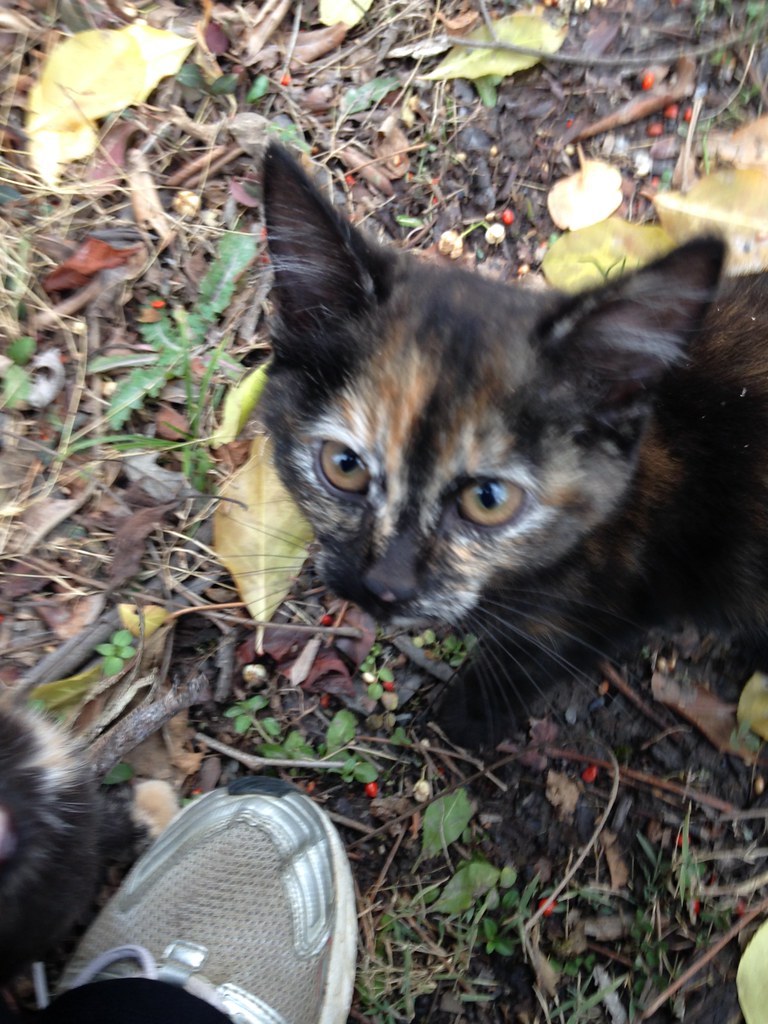 I had nothing to feed them, so I put a handful of Charlee Bears on the ground and they ate it in about negative one seconds.  They were happy to approach me so I scooped them both up and plunked them into the plastic travel crate inside of my car with more Charlee Bears.  (A wave of gratitude for keeping crates in my car!)  I posted a photo of me and the pale faced kitten on Facebook and I started thinking, 'What am I going to do?"  Taking the kittens home and fostering them was out of the question.  Husband Vince has decreed No More Animals.  So of course I called him right away and got threats and a very stern NO.  I vaguely remembered an animal rescue being quite close to the area, but could not find it when I searched on my smart phone.  I drove out to the area where I remembered it being and decided to stop at a vet clinic that I saw.

There were four ladies on staff and they all felt that the kittens were one million percent adorable, and they all seemed to have the same issue that I had: their husbands would kill them if they brought home another animal.  They did confirm the rescue that I remembered, and that it was a cat-only rescue.  But it might be closed for the weekend.  They also suggested Diane's Pets.  Diane's is where I recently had Ein's dental surgery, it is where I had Perri spayed.  Diane's provides vaccines clinics and affordable vet care to the community.  They also regularly visit kill shelters "down South" and bring death row pets up to Pennsylvania for adoption.  They screen prospective homes.  I wanted these kittens to go there!  A quick phone call, and the kittens were accepted.  Their luck had just changed for the amazing!  I was so grateful that I found a place that would take them that I knew and felt comfortable with.  Kittens though they are, there are so many unwanted cats in the shelter system and I could not have surrendered them anywhere that there would be a chance that they would be euthanized.  (Although truly, cute kittens at Christmas-time have a very low chance of euthanasia, no matter what.)

The kittens are already posted on Adopt A Pet!  They are called "Kittens in the Woods" and they were found by a good samaritan.  Love it.  (Perri was not interested whatsoever in being a good samaritan poodle.  She growled relentlessly at the kittens and did not appreciate their little arms coming out of the crate holes and batting at anything they could reach.  She barked endlessly when I removed them from the crate and took them into Diane's Pets.  Ridiculous poodle!) 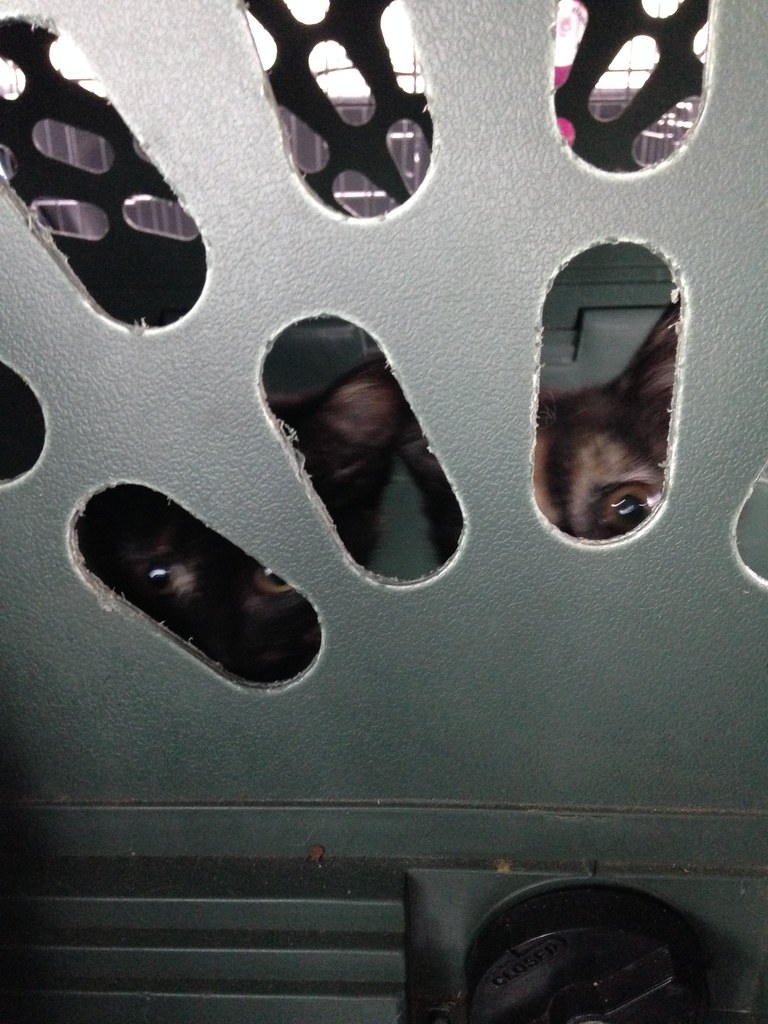 Posted by dogbird daily at 7:03 PM