AKC Agility and Hiking with Perri

Some days you do great at a dog show...and then some days you don't!   Today was one of those "don't" days with Perri.   We only had two runs: her first shot at Excellent Jumpers with Weaves, followed closely by Open Standard.

JWW started at 7:30am which was probably the earliest I have ever had to start at a trial.  I got there half an hour early, though, and tried my best to acclimate Perri.  It wasn't enough.  I didn't want to overdo it with her before her ringtime and I cut it too close.   I took her to the ring at the beginning of the five minute wait period but they started it earlier than that because "everybody was there."   Somebody cut in front of us on the warm up jump, and by the time we got into there I had done one jump with Perri and she started stress sniffing the floor and we were being called for by the gate to go into the ring.  Not good.   I can work Perri through the stress behaviors, but it takes time.  Time that we didn't have.   She broke her start line stand for the very first time ever and she was fast and on the edge of control.  The course was full of tight turns, a serp and a few 180s....Perri's weak areas.  It was a refusal festival and Perri was high but to her credit she stayed with me and though I was behind her the entire course she did some pretty nice work (in like, two spots on the course.) in spite of being a train wreck.   The final blow was Perri entering her weaves....seeing her own reflection in the glass sports arena wall...and leaving them.  I let her do the final jump and we left the ring.   At least she didn't pee in the ring!

Standard I got her ringside early.  We did our exercises that we learned in Get Focused! and that helped a whole lot, as it always does.  Her ears and tail were up before we entered the ring.  Then I did what I had to do, I took her over to the glass wall.   Instant stress sniffing and disengagement.  We worked back from that.   I will say one thing: it pushes her to her limits, but Perri is a resilient thing and she re-centers on me faster than she was ever able to.

Then we had to run.  The weaves were right next to the glass wall, she popped out of them.   We got through them with lots of shameful luring and cheerleading.  I sent her over the next jump and she got on the table for a wrong course fault.   Not like Perri at all, but I'm gonna blame that on stress release.  The next part of the course she did two rear crosses and read them well and was running fast and I was super proud of her.  Up and over the Aframe cleanly and into a tunnel, over the next jump and a sharp 90 degree turn to the next two jumps followed by another 90 degree turn onto the teeter.  Perfect, perfect...  Then was the table.  For the first time ever, Perri popped off the table and that was the nail in the coffin of our NQ.  Everything else she did great.  Even with all of that we would have still qualified, but we were three seconds overtime, adding 6 more faults to our 15 faults for the refusal, wrong course and the table fault.

So, two firsts this weekend for babydog: breaking her start line and coming off the table.  We have been working on weave poles this week and it seems like the more I train it, the worse they get!  I am honestly sick about it, Perri used to have pretty reliable weaves...  I have to say that a lot of the problem is that I am now worrying about it, and she is sensitive...and the issue is snowballing.

Anyway!  We left the trial by 9:45 in the morning, that's a record!   And then we went hiking and geocaching and Perri retrieved a stick many times out of the reservoir.  This is a Big Deal, I love for my dogs to enjoy swimming and fetching.  Perri is coming around to enjoy fetching things, but if Molly is with us she prefers to chase and bite Molly. 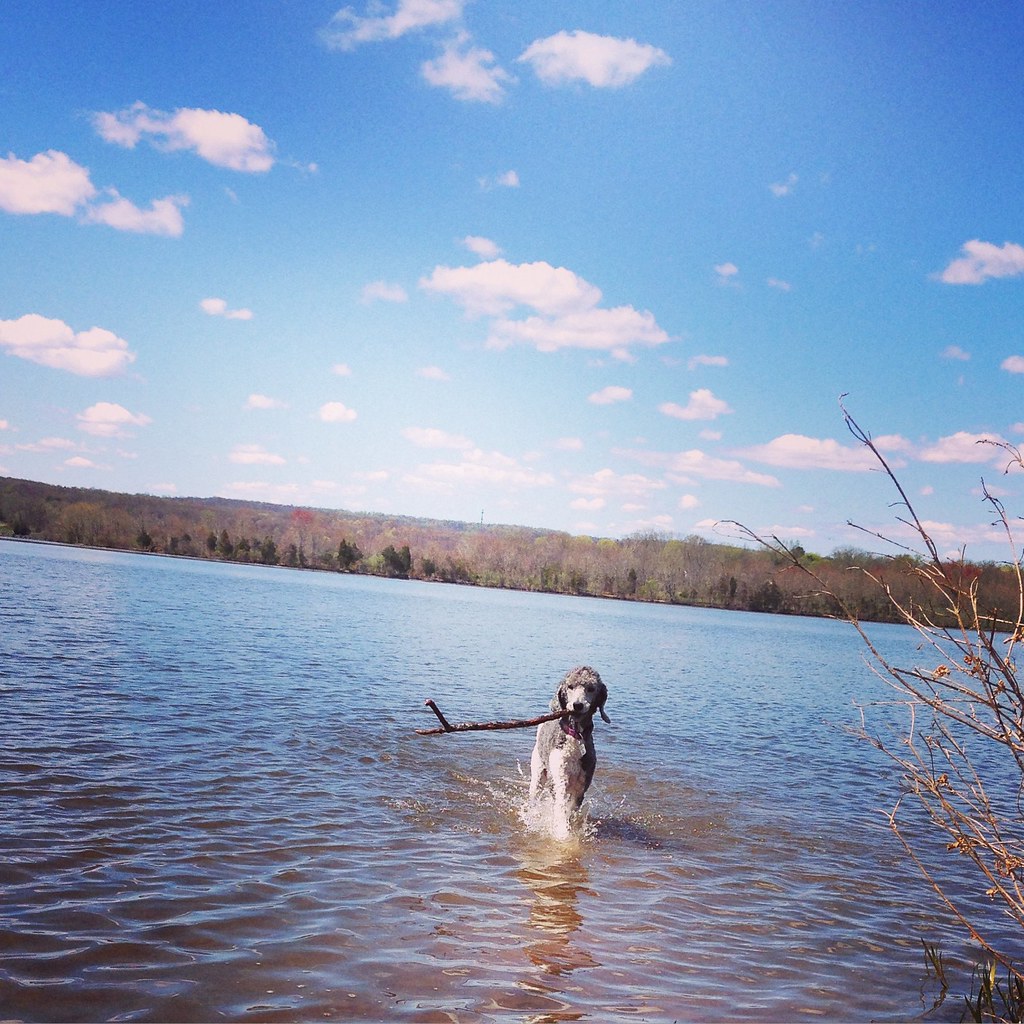 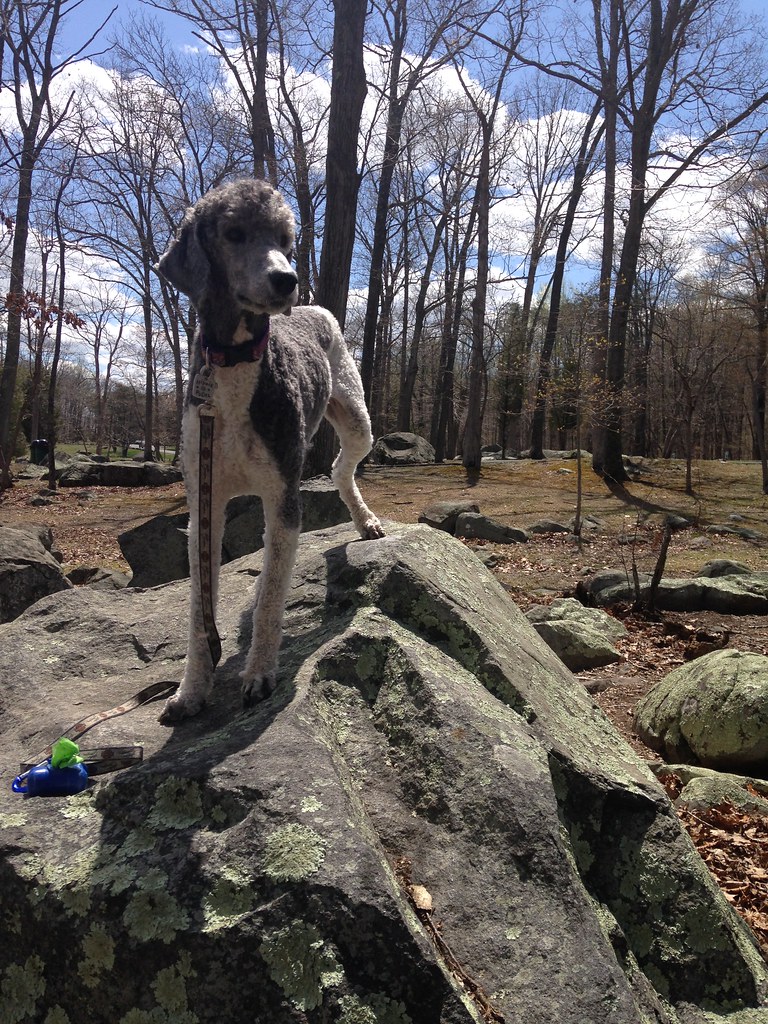 We had a really great day together.  There were good moments at the agility trial for sure.  My husband said something about Perri when we went to the specialty, "She's just going to act like herself."   That's what Perri did today.  She was stressed, she did some goofy stuff, but she tried really hard.  That's Perri, and I love her for it.   And the other thing about Perri is that she is just a fantastic trail dog.  She's good off leash or on, she goes and goes until I decide we are done, she is calm, she waits patiently while I look for geocaches or take photos.   She is a Good Dog and I feel very lucky to have had a wonderful spring day with her. 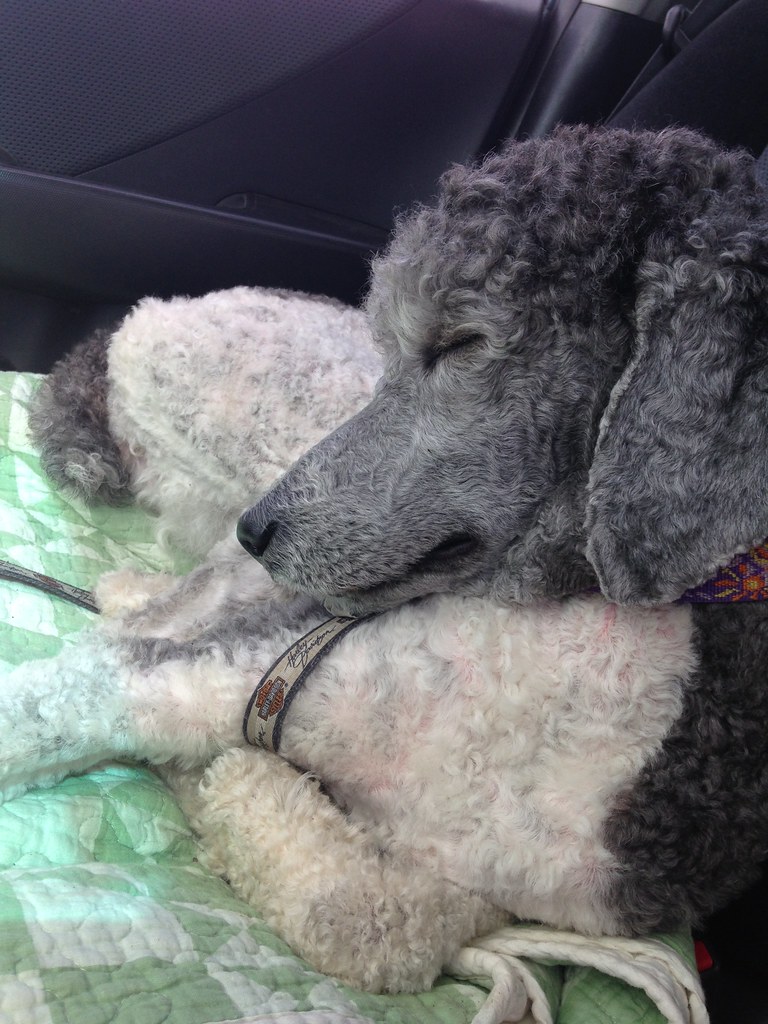 Posted by dogbird daily at 5:39 PM