Well of course Molly is well recovered from her tooth extraction and we attended a USDAA trial this weekend!  We haven't done USDAA since last September so we picked up where we left off: needing two Standard Qs for the Performance Dog title.

Saturday we played Gamblers first.  Another reminder that Molly needs to learn to stay out in the Gamble rather than pulling back to me.   No refusals in Starters/P1 though so resending her to the final Gamble jump earned us a Q.


Standard was next and fingers crossed for a Q so that we could earn our PD this weekend.... A table fault!  I was surprised.  I had to really think about it but the last time Molly has had a table fault was May 2014 and she was very stressed and out of control on that run.  I think she just did not collect herself after her running A-frame.

We ran Jumpers last class of the day and qualified.  That gave us a second P1 Jumpers Q.   It was a little hairy due to Molly getting a bit wound up about a barking dog in the ring ahead of us, a broken start line stay and some flustered handling on my part, but we recovered well!

Today was Jumpers first thing in the morning!  We were much more organized today but Molly had to make a pit stop to give the ring crew a hello before continuing the course!  A third P1 Jumper Q so we earned our SPJ title. 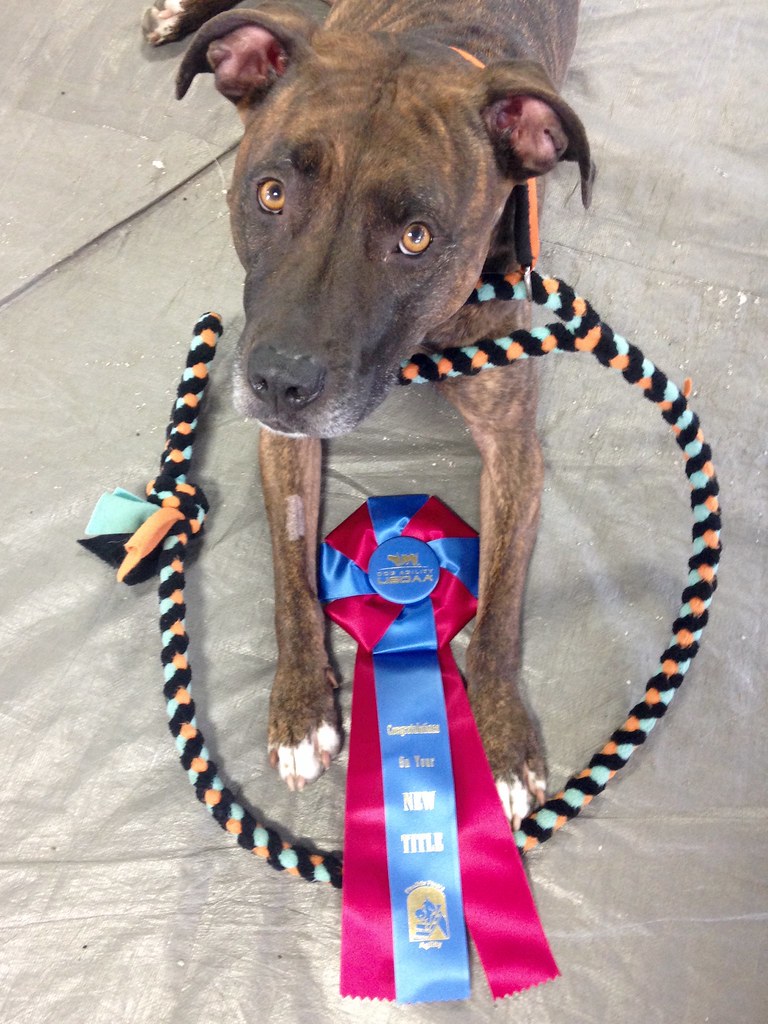 Last run of the day for us was Standard.  I did not hose Molly off to cool her down and regretted it.  She was panting and pokey and almost popped out of the weaves.  I was very proud of her for staying in them even if she did stop and then do them as sloooooooow as possible.  Even though the speed is not there with the weaves, I really feel that we are getting somewhere.   Another weekend of getting her entries and staying in feels very positive to me.  The speed will come with time.  She stuck on the table this time around and we qualified!

And as if my weekend could not get any better, there was a sports medicine veterinarian at the show!  I was dreading the two hour round trip through terrible traffic for mine and Perri's appointment to have her looked over this Thursday, as much as I loved the vet we were going to go see - I even had to take a vacation day in order to get an appointment for her.  I wanted her evaluated very thoroughly by a vet to be certain she did not have any bad soft tissue injury before returning her to agility...so to be able to have that done right at the agility trial was beyond amazing!

I was asked to trot Perri back and forth and he asked me if it was the right side.  Yep!  He said it was extremely subtle.  (When I looked him up later online his website says that he specializes in canine gait analysis.)  He felt Perri all over, said there are no problems low on the leg, even low in the shoulder.  More feeling, working, massaging.  He asked me if Perri had been playing with Molly since her chiro adjustment.  I guiltily admitted that Perri had been playing pretty vigorously with a french bulldog that we have been dog sitting since Friday night.  He asked if she was hard on herself.  I've never thought of Perri as being hard on herself, but as I considered the question I would have to answer that she is hard on her front end.   She pounces and lands hard with her butt in the air.  She will launch herself from that position with a shriek and spin and pounce again.  Sometimes she serial pounces, boing boing boing and then more spins.  She also loves to nap on a very high bed that we have in our guest bedroom and of course jumps down from it, many times per day.  More pressure on the front end.  Perri's entire rib cage was shifted and she looked like she was walking with a rod inside of her spine.  Afterwards she seemed a lot more flexible.  We have the blessing to return to agility and hiking!!  He said she is not so much injured as much as I need to be aware that this area of her body takes a beating and that I can probably expect this again in the future.  And to be sure to supervise playtime between her and Molly.  I hope I am remembering everything correctly!  I am beyond excited to get my girl back to what we love!   Next Sunday we have a CPE trial so I will enter her in two runs at her measured height of 20" and will see how it goes.
Posted by dogbird daily at 12:57 PM