Molly and I did another AKC Agility trial yesterday.  I was quite dismayed to realize that FAST started at 7:30 AM (nearly 90 minutes away from where we live!), but the trial was Small to Tall.   That meant being there really early, and then waiting hours for our next ring time.  Oops!  Would not have entered FAST if I had read into this more carefully!

This was a trial site that we had never been to before, but one that I plan to return to.  It was a sports center, with an air conditioned crate room, very nice cafe, and clean spacious rings on sprint turf.  I actually crated right from the car because the parking lot wrapped around the building so that it was a shorter walk from the lot to the rings than the crate room was.  I love that layout!  Any day I don't have to carry all of my stuff around is a good one.

FAST was a jump to the less obvious tunnel end, to that same jump on the return out of the tunnel.  We got the wrong end of the tunnel since I did not pull Molly hard enough.  I had been eyeing a better approach for our start that would have lined us up better for the send, but chose not to do it because it was less points.   Regrets!
We salvaged the time by practicing the Aframe (got the yellow!) and the weave poles.  She started to do a stress run out but surprised me with a sharp turn directly into the weave entry and she stayed in!  This meant a lot to me because I could see that instead of being overwhelmed by weave stress and trial stress, Molly was using her brain.   Great personal Q!

Standard was four jumps, rear cross the fourth to get the dog onto the dog walk (and not on an off course tire.)  Molly read it all beautifully.   I asked her to stop on the dog walk.  I could see her racing and then the instant I said "Spot", I could see her collect herself.   I really believe she had every intention of stopping....but then there was that guy sitting in the ring crew chair at the base of the dog walk....  She did run the whole ramp nicely but did some visiting.   She was stressy and hot and panting on the start line so I'm not surprised she blew off some steam this way.  If I had been thinking clearly I would have altered the way I chose to handle the next sequence.   She came back to me, took the next jump and then we needed to take a second jump and do a sharp left into a tunnel.   She was running fast off the ring crew, so I decel'd hard and began my rear cross....but she wasn't driving hard enough.   She stopped and looked at me, and then read my lateral movement and took the tunnel instead.   Refusal and Off course.   I picked her up out of the tunnel like nothing wrong had happened and we finished the course with speed and happiness.  She got a very tricky weave entry that many Masters dogs were faulting (we are only a baby Excellent team with a weave entry problem.  CHEER CHEER!!)  got to celebrate a fine weave performance with the wheeee! chute! and an Aframe contact success followed by three tricky jumps.  I was nervous because trying to steer Molly after her running Aframe is always a little risky.   It was overall some really good stuff, we are getting there!

JWW was about an hour later.  I doused Molly with the hose after her Standard run as well as right before her JWW run so that she would not be so hot.  I wanted to do a lot of rear crosses so I needed my dog to be her normal self!  It worked.   We did a great job on that course and I am so sad I don't have it on video.   Another weave pole entry and staying in of course and our very very first AKC Excellent Q!   I never thought this was possible!! 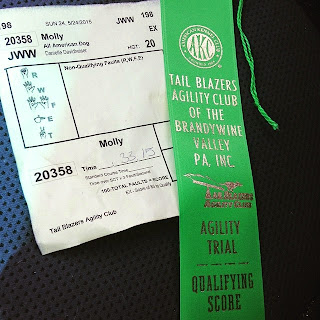 Posted by dogbird daily at 8:19 AM