Cynosport Rally-O - Ein is Back!

Sunday was a really really big day for Ein and I.  At the end of last year, I was enjoying Ein's growing enthusiasm in the rally ring.  It was getting to the point that I was considering returning him to regular titling classes.  I decided against it at that time.

But through this year, we have not been showing in Veterans as much, but Ein has been joining Perri and I in her rally class.  And was bursting with pride and joy.  The courses were longer but he never grew tired, he never stressed down.  Our wonderful instructor helped me maximize his attention and hold him to a tighter standard, as well as pushed me to be a better handler for both Ein and Perri.  We are currently taking a break from rally class (for Perri's sake.), but when it came time for the club's summer rally trial...

I entered Ein in Level 2B and 3B, no Veterans.  An ARCHEX QQ.  I said we would not do it, but I say that about a lot of things.  There is no finality in my decisions.  These are incredible and surprising dogs, I am learning and growing, we are an evolving and beautiful team, me and these three dogs.  But could Ein do it?

Oh, yes he could!  Ein killed it.  A 210 in Level 2 and a first place.  Ein has never earned a perfect score in Level 2.  It was a misery to simply earn the thirty points that he needed for his ARCH back in 2013 since our scores often did not break 195.  He has earned exactly one perfect score in regular titling classes and that was in Level 1 with the "safety leash" on.  He earned a 205 and second place in Level 3, and this was his highest ever score in Level 3.  The five points he lost were on the bonus exercise - and it was simply because I have not taught him a formal retrieve (He drops the retrieve object.)

I can't stop thinking about our day.  About our journey.  I remember after Ein's very first rally-o trial (AKC.  August 2012 at the Harrisburg farm show complex.) I remarked that I could not imagine Ein ever doing a right finish properly. (Without freezing and staring into space.)  Oh, please.  I have thought that so many things were never possible.  Including this day, this Sunday.  My dog with eyes only for me and completely fearless.  My little dog and me and everything else falling away while we danced together.  Ein's fearfulness felt so final, like a wall we could cope with and work around, but never ever break through.  Until we did. 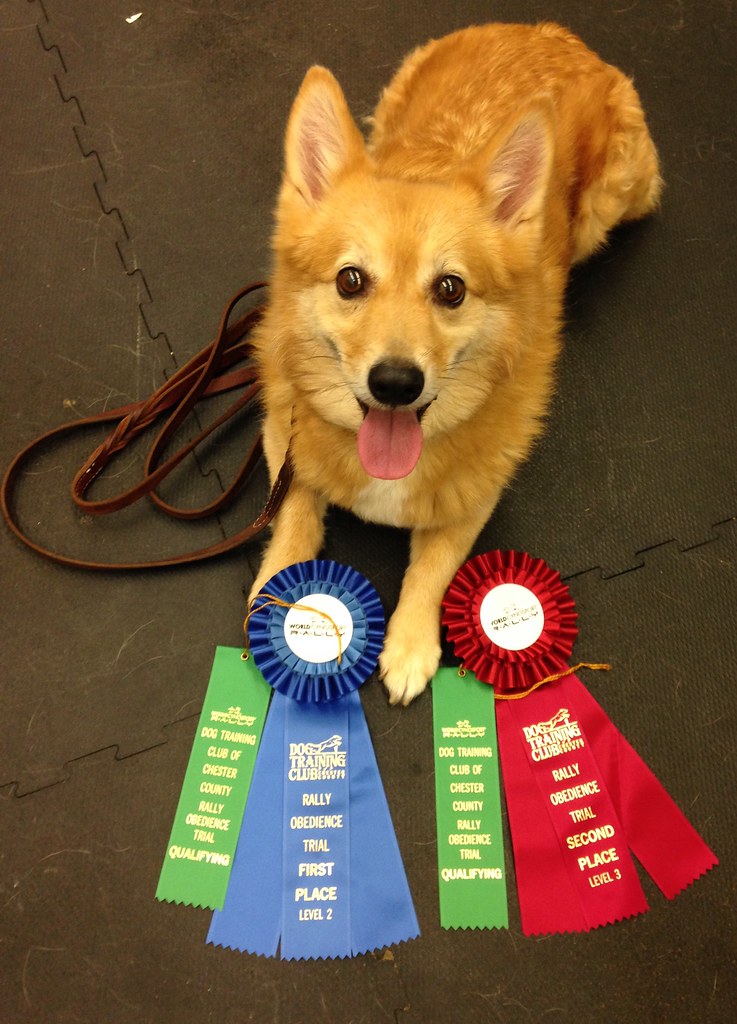 Posted by dogbird daily at 7:23 PM