Last Sunday Molly and I got to check something off of the Molly Bucket List....we attended a formal DockDogs event!   For years I have been saying I wanted to do this with Molly, but kept putting it off.   This year I went to the local Cabela's as an observer for their yearly DockDogs event and was completely inspired to get Molly on that dock!

We went to the next available DockDogs event at the Bloomsburg Fair.   I might have been nervous about going to such a hectic place with Molly if it was not for a concrete fact: Molly is ball crazy and "neither snow nor rain nor heat nor gloom of night can stay Molly from her ball."  (nor fair food, nor loud crowds, nor carnival rides either!)

Parking was chaotic.   It was my first time ever at this Fair, despite living in the state of PA all my life, and it was certainly my first time doing DockDogs and I did not know where to access information about the event.  The fairgrounds are enormous, we are talking miles and miles.   I chose two wrong parking areas, and finally settled on a third wrong but sort-of-close parking lot and ended up carrying my EZ Up and wire crate over half a mile.  (Yup, I was sore the next day!)  I later found out that I was allowed to drive my car into the fairgrounds and drop my stuff off.   Oh well.   It's good that I got there early!

We had plenty of time to check in, ask questions, and practice on the dock!  Jump distance is calculated by where the dog's tail set hits the water, rather than the front end of the dog.   This keeps things fair for dogs that are smaller or not long of body.   The handler is permitted to use any toy on the dock, so long as it is not edible or living.  Okay, no problem there!   Our toy of choice is the trusty orange and blue floatable Chuckit Ball, and I absolutely love that ball because Molly chews the ball as she swims back to land.  It is the only ball that can take the jaws of Moo!

We warmed up on the dock.   Her very first jump she slowed at the dock edge ever so slightly but after that, there was zero doubt...Molly loved this game!  I knew she would!  We did about five or six practice jumps, for warm up and mostly because Molly just loves to fetch her ball.  I then toweled her off (I brought a towel so I didn't have to put her into her crate soaking wet, it was a cool morning.), let her go pee, and we waited for our "Wave".

Before each "Wave" there is a Judge's Briefing, and you must attend it.  The judge calls out all of the teams names in the order that they will be jumping, and you need to be there to say that you are present (even if you checked in.)   The Wave is split into two groups - and each team gets two jumps per wave.  Each Group ran back to back (so it was Group 1-Group 1-Group 2-Group 2).  Molly and I were in Group #2 on the first Wave, so we would need to wait until each team in Group #1 jumped two times.  The atmosphere of DockDogs is so fun, there is a crowd there cheering with the judge revving them up, there is loud music playing, and all the dogs are crazy like Molly!  We were not the weirdos!   Molly was totally cranked up and so was almost every other dog there, and that was how it was supposed to be!  Molly was truly naughty.   She was jumping on me, she was biting at me, she grabbed my sweatshirt, she was screaming and barking and chattering and making every weird noise that she makes.   I ended up hiding the ball in my pants because she was simply unable to be successful in any amount of "impulse control" when the ball was available.  She would do a down when I asked her to, but duration was escaping her at this very exciting event.  So, something to work on!  I don't like to let Molly be totally wild and out of control, even if it is typically exclusive to the ball (or, like at the AKC trial...when she thought lure coursing was available.)


Anyway!  Our turn was up before we knew it and I was totally smiling to hear the judge announcing mine and Molly's name to the crowd, and I was totally proud to have Molly announced as a pitbull amongst all the retrievers.  Still oddballs there! 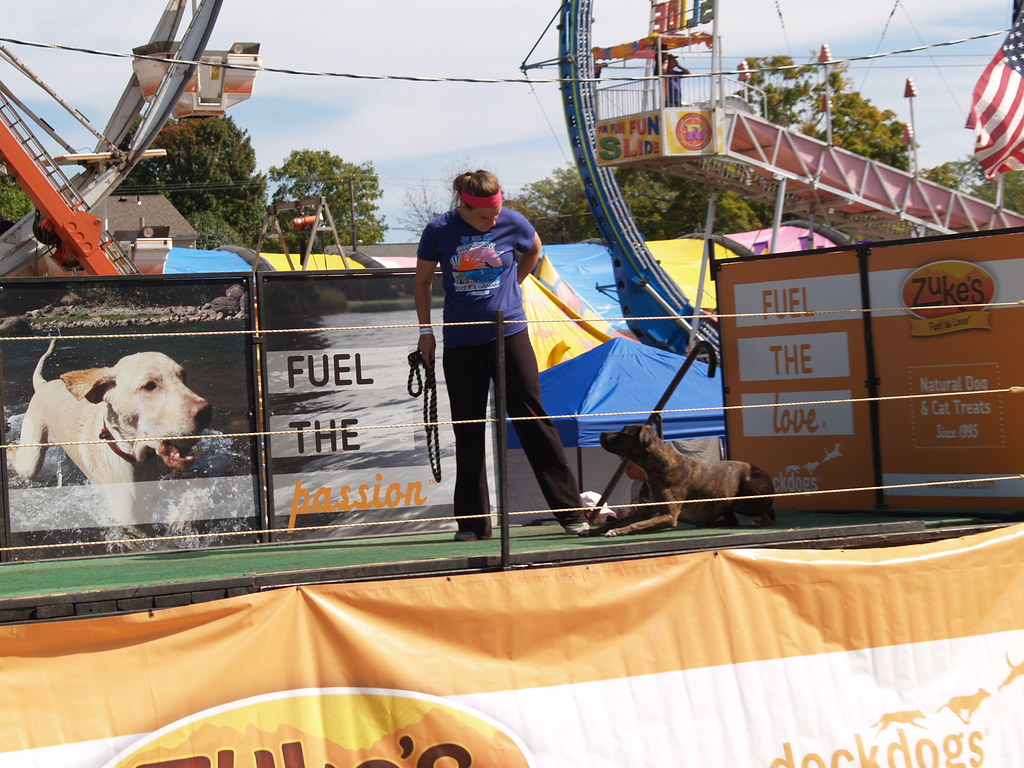 Up on the dock, I asked Molly to go into a down-stay, and she did.  And she held it!  We have practiced this regularly when we play ball anywhere, any time, and we practiced it on our warm up jumps.   This is hard for Molly!   I think that her holding that down stay on the dock in the middle of a crazy fair with carnival rides, people everywhere, people cheering, loud music vibrating, every single circumstance unfamiliar to her...I think that was what I was most proud of from her.  I knew she would jump for her ball, I knew she would love it.  But I was amazed that somewhere in her wild brain she knew "I have to stay or the ball will be unavailable."  Cool!  Our two jumps were 13'8 and 13'11 and the jump distances were announced the crowd before we were even off the dock!


I took a break after our Wave... Molly and I walked back to the car for some things I had forgotten in the chaos of the morning, we strolled around the Fair (which I later found out we were not allowed to do.  The fair is not pet friendly.)  I also loved how chill and confident Molly was.  She swaggered around with her big stripey tail swishing side to side, it would pick up tempo when she saw somebody that wanted to pet her.  She was not leash pulling, she was not crazy, she was out for a stroll in a crazy new enviornment and she was cool as a cucumber.  Love.  She was smelling the air, she was taking it all in, she even sucked up some awful mashed and unidentifiable food off the ground (and I was just as quick, jumped on her, pried her jaws open and shook her until it fell out of her mouth.)  Yuck! 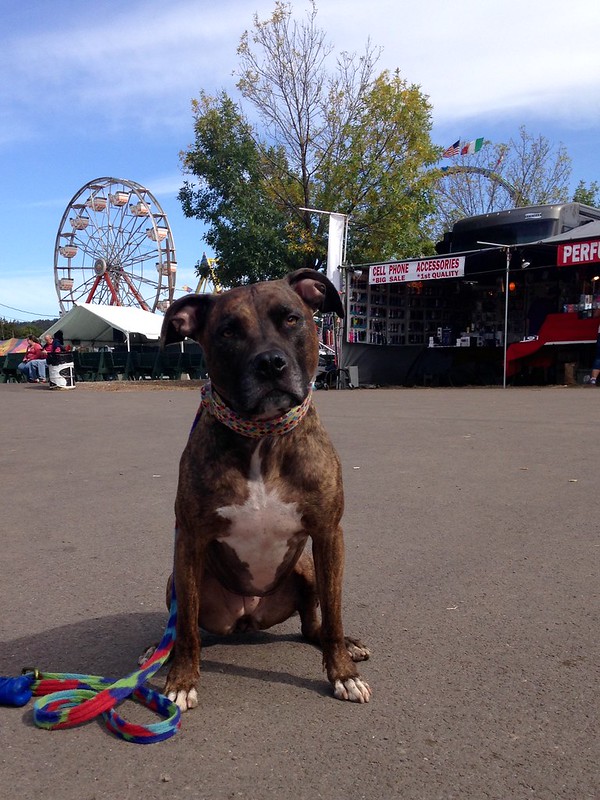 We returned to DockDogs (with coffee!) to watch the second Wave.  I had only entered the first and third because I didn't want to overdo it and I thought we might like a break in between.  In retrospect, we totally could have entered all three, but hey.  Our first time.

Another thing I loved about DockDogs was how friendly and supportive every body was.  I wasted no time proclaiming myself to be totally green with no concept of how anything worked, and everyone was welcoming and took any opportunity to help me learn things.  One of those people told me to go check at the registration tent to see if I had gotten any medals.  Medals?!  I told him that I wasn't even a DockDogs member and reminded him that it was our first time, I doubted we had gotten a medal.   He said, "Go check!"   And there was a 1st Place in Junior division medal with a blue ribbon for Molly and I! 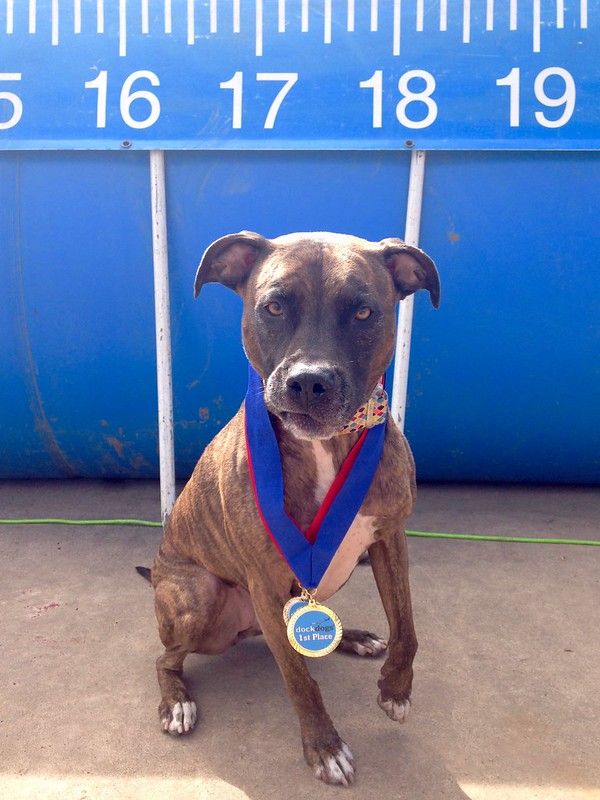 We are going back!  I cannot wait for next season.  Why oh why didn't we start this at the beginning of this year??  Oh well.  And I have been studying how to get longer jumps.  Molly is powerful and fast and driven, but I will need to practice my throws.  And I will also need to get Molly to follow the ball so that she "bounces" up into the air after the ball.  Right now she, understandably, launches off the dock with the certainty that the ball will land in the water and she will get it.  6 years old, and that is what she knows!  So, we will work on getting more lift off and see if we can break 14' next year!  I love that there is a training aspect to dock diving, that we get to work on some fun new challenges.  Molly will be happy to comply.  I found this blog post on "Team 4 Dawg Flite" that have some super helpful tips for the direction we need to go in.  Molly also "launches" early off of the dock, at least two feet.  Maybe we can change the take off point.  Things to work at. 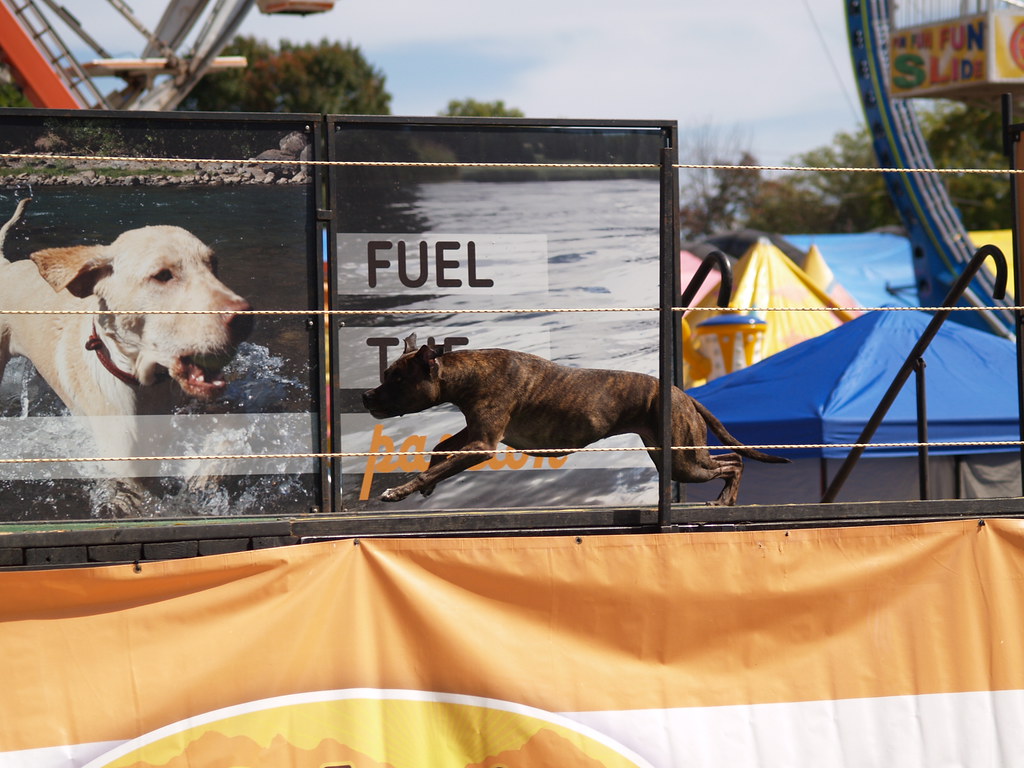 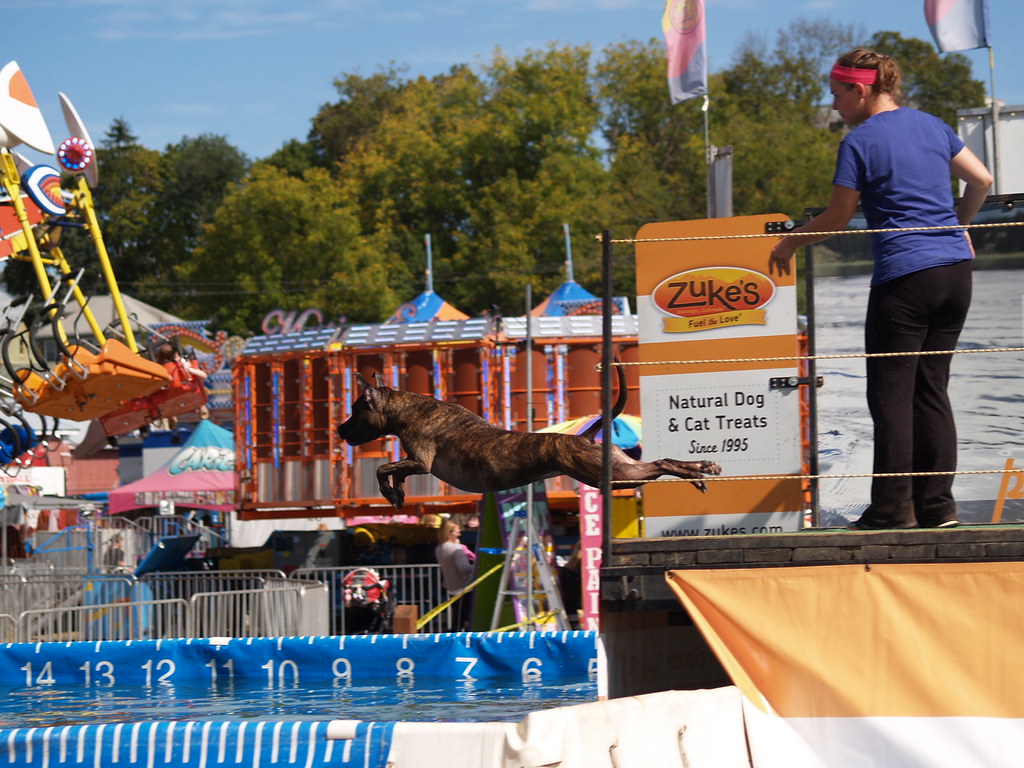 On our way home, Molly and I stopped for some geocaches in Centralia.  This is not my first time visiting Centralia, and I wanted to grab some more caches while we were passing through.  Centralia is a town destroyed by an underground fire that never stops burning.  You can read more about it on this post from one of my prior visits there.  It is a weird, abandoned, semi-creepy place and a pretty popular place for visitors and locals who just want to hang out.  Molly and I completed the Earthcache, found a letter box cache as well as a cache hidden in a grove of pine trees down some random side street, and then we went for a walk down the Graffiti Highway.  There were so many people around that we did not stay for very long.  Molly was really tired and when someone started popping off a gun or small fireworks of some kind, she got very afraid (Molly is terribly gun/firework shy in addition to her storm phobia.) 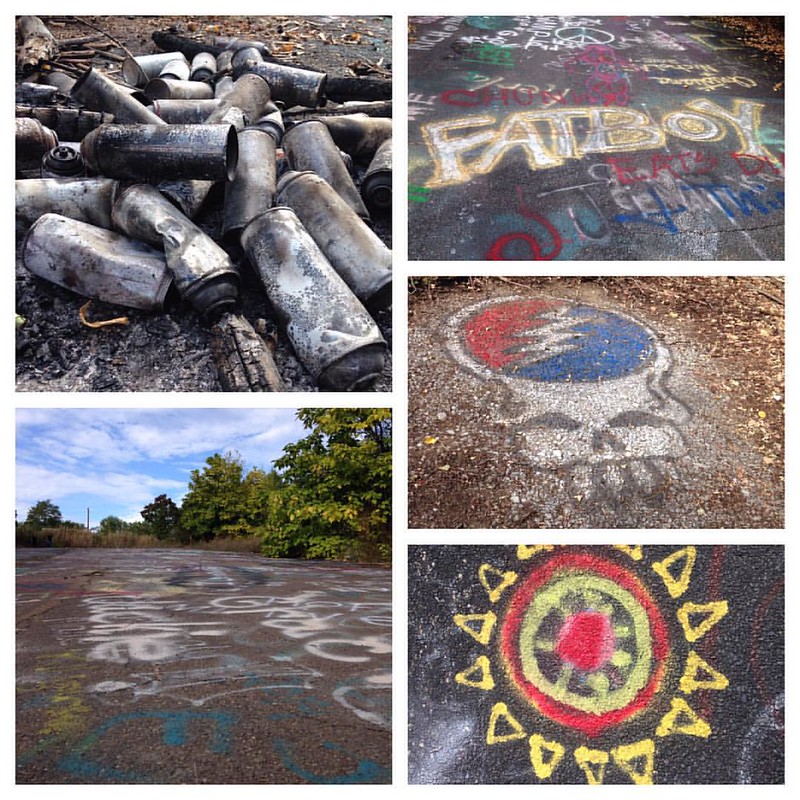 So, a totally fun all around day spent with my best stripey dog.  I had considered bringing Perri along...simply because Perri loves to be along all the time, but I'm glad I left her home.  For one, the fair would have overwhelmed her.  And for another, with three dogs, sometimes I think the dogs really crave and enjoy their individual time with me.  And if they don't, I sure enjoy my individual time with them.  Until next season, DockDogs! 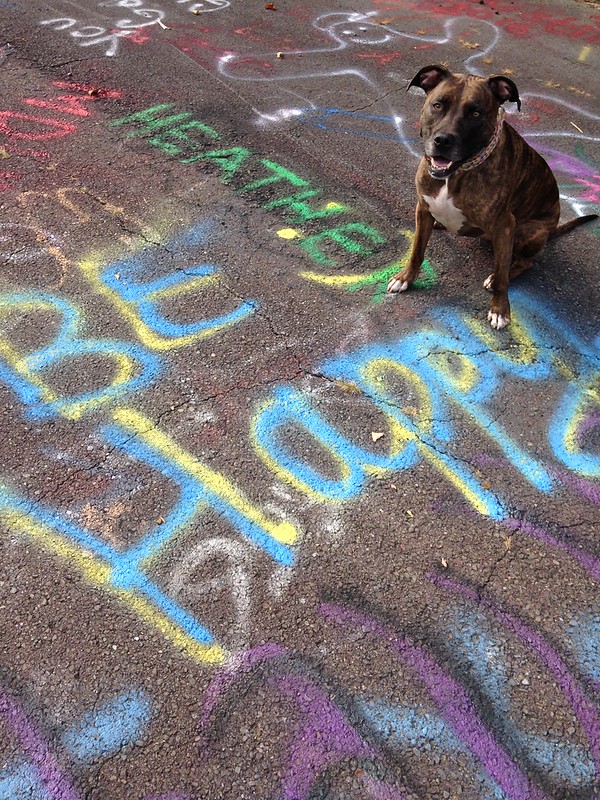