Ein got to go to his first Obedience match today!   I had wanted to go to this match, but missed entering because it filled up.   I got lucky because somebody ended up not wanting to go, so she was giving away her two Novice slots to the first taker.   Meant to be!

I don't know if it is because Ein makes me more confident, or because I am finally learning something, but I felt like today I had A Plan and I stuck with it!   A big deal for me!

My plan was to do our heeling patterns exactly as we would do them in the ring.   No food, no extra hand signals and no chatter during heeling.   I planned to take Ein out of the ring to our crate for a special treat (salmon brownies!) after each successful exercise.   I planned to take advantage of having the "judge" to work on Stand for Exam - Ein and I have been working very hard on this exercise at home with great success.  We are really enjoying the "Stand with Me" class on FDSA from Bronze level and Ein has risen to the challenge of having his stand-stay proofed and made extremely valuable.

Heel on Lead he was distracted and sniffy for the first half - he missed the first halt because he was not paying attention (he did feel me stop and sat about two paces ahead of me).  I stressed but talked myself through it and reminded myself to handle my dog instead of wilting.  It worked.   We hit the first about turn and I had my dog back, bright eyes and that big grin and prance and he nailed the rest of his heeling.   He was forging on the figure 8, both times!, and that is such a new problem for us...I'm not even sure I actually care!  I'm still so charmed by the change in his attitude.

Stand for Exam: our first time in I asked the judge to do a wide walk around.  Ein was solid.  I asked her to walk along side of him and pause near his shoulder, about two feet away.  He looked at her but refocused on me ("you're not gonna get me, mom!")  I released Ein and partied with him and then I we reset and I asked her to do the exercise as directed.  He never even looked at her.   I could have cried.  My boy!!    Our second ring time I asked her to just do the normal exercise and once again, he never moved a paw, never looked at her.   She was just another silly distraction for him.   WOW.  Very encouraging for me!

Recalls...wow that's a long distance!   Ein was a little unsettled by that big open ring floor but he came trotting into front and sat nice and close, although off to the side slightly.   Crooked finishes because of that.   I'm sure Ein will enjoy some sharpening up with a platform - not that I care too much about crooked fronts or finishes, but Ein loves training so why not?

Group stays: Ein was solid as a rock.  I assumed that he would be, but it was good to test drive.  The dog next to Ein was very antsy, sniffing the air next to Ein and moving around with the handler coming in every few seconds to reward or reset.  It was a good challenge for Ein and no one actually invaded his space, which I was grateful for.

Very very positive first time for Ein at a match.  I really wish that I had been smarter before I introduced Ein to the CDSP Novice ring, and prepared him better.  We will probably revisit CDSP this spring, because it will be fun for him and I would like to see him in the ring as the prepared and confident dog he is now!

Speaking of dumbbell, more progress there at home.   I started placing the dumbbell next to 'upsetting" objects, like the vacuum cleaner or piles of trial gear or any jumble of "stuff" that would throw Ein off.   He progressed quickly with that so I really wanted a person to stand there because that is what threw him off at the rally trial...but Vince has been busy working so...Perri to the rescue!   Who says those long stays aren't helpful in real life??   I put Perri in a sit-stay and placed the dumbbell a few feet away from Perri.   Ein acted exactly like he did at the trial, bingo!   He came back to me without the DB.  This is a good challenge for Ein, he is very uncomfortable going into Perri's personal bubble to get the DB.  But! Ein is overcoming these challenges with ferocity, I think another session or two and his confidence will grow that he can get that DB no matter what! (He did, he was just reluctant about it.)   And the upside is that Perri was very eager to do a dumbbell retrieve after having to hold that sit-stay and watch Ein have all the fun!

And speaking of Perri: she came to the match today and all we did was work on her comfort level and engagement.  I got a pocket full of treats and just stood and waited.   She was scanning intensely, she cannot focus on every thing at once so she goes into a tizzy and becomes paralyzed with sensory overload.  This is why she cannot heel.  We are going to progress slower from here on out, and give it as much time as it needs.  I waited for a good long while and she eventually looked at me.  Treat.  And so the game went.  We moved to different locations and for focusing on me, she got a treat.  I noticed her response was much more enthusiastic and her focus stayed on me longer when I asked for a "sit pretty" or another trick that she liked.  One time she focused on me and offered her back-up (heavily rewarded from when we were doing it twice daily during her active rehab!)  She was much more comfortable when we left the building and I felt very good about the whole thing.   We will do this at Ein's next rally-o trial as well as his next match.

A raging success all around!   And we had enough of the day left afterwards that I could take the girls on a hike (and found my 1000th Geocache!) 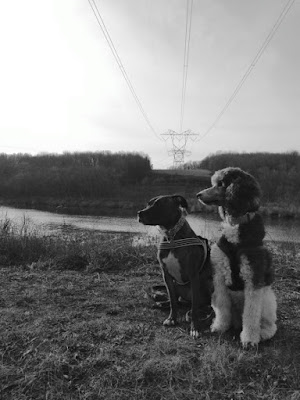 Posted by dogbird daily at 3:49 PM