Molly girl had her first agility trial in over a month today.   It was a short day, we did only the first two classes: back to back Standard.    I don't have any videos or ribbon pictures, but we really had a nice day together and I feel like we are refreshed after our break!

I gave Composure another try for this trial.   I gave Molly two the evening before and two the morning of the trial.  I feel that it helped to lower her stress level at this trial, much like the Pet Naturals of Vermont calming treats did at our early December trial.  I tried Composure one time, at our last agility trial of 2016 and I saw no improvement in Molly's stress.   However, her anal gland infection was at its absolute worst (we began treatment the following Monday.) and I was very stressed out for many reasons and it affected Molly poorly.   I'm glad I gave it another try because I definitely noticed a difference.   Molly was chattery when we entered the trial site but she quickly kept reorienting to me LAT-style, of her own choice.  I was very happy to see it.

In the ring Molly was fast but focused - way more focused than I expected!   She wasn't driving out of control hell on wheels and our teamwork was slightly sloppy because of that.  I was doing majorly early decels and unnecessary rear crosses to keep her off of wrong courses and she was actually stopping up short and looking at me like I was crazy.  I could have gotten out ahead of her a lot more than I was, but I didn't expect the focus and calmness from her.   Time to switch gears!

On our first round of Standard we were clean except a naughty wrong course tunnel, and our second round of standard we were clean and qualified.  She did all of her contacts and they were good deep hits, not "toenail" contacts.   Weaves I continued to challenge myself and forced myself to give her distance getting into her entry and then walking ahead of her in the poles as well as being several feet away laterally.   And it worked.   Molly got both entries nicely and rewarded the decrease in my spatial pressure by speeding up in the weaves.  I realized on the way home that that awful habit I used to have of clapping while she was weaving was not even a temptation today - no clapping!  I did use some verbal encouragement ("Go!" and our "keep going signal", but no continuous chatter.)   Super!

I also made a decision for 2016: no more bad mouthing Standard.  No more bad mouthing our team's performances on Standard.  This was a goal last year for me and I did not do so well on it.  I kept catching myself thinking stressful thoughts about Standard today, but I decided that is okay.   I decided to start slow, no verbal negativity about Standard - thoughts are okay for now.   No saying, "Yeah we are just here for Standard because we suck at it." or "It's always either the wrong course, weaves or contacts!" or ...anything like that!   I was surprised at how many times I was tempted to joke around with somebody in a Standard-hating tone.  I have a bad habit of indulging in self depreciating humor but Team Danielle-and-Molly's performances in Standard will now be off limits.  The next step will be to phase out negative thoughts, but I will get to that when I stop having the urge to verbalize.  It will be a process!

So, our first trial of 2016 is in the books.  Short, sweet and successful - I feel renewed as a team! 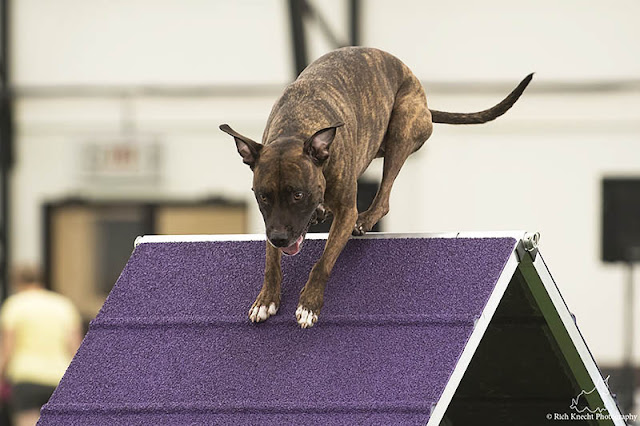 Posted by dogbird daily at 2:34 PM

Email ThisBlogThis!Share to TwitterShare to FacebookShare to Pinterest
Labels: cpe agility, it's all about the journey, molly, trials, weave poles