I chose not to test for Anise and Clove.  Perri is doing well with Anise scent, and we have not even introduced Clove.  There is no rush.  I chose to focus our training sessions, for now, on getting Perri as confident as possible with ORT simulations...in as many places as possible.  When we started ORT prep, it took Perri full minutes to indicate odor to me, at home.  My focus isn't on having a fast nosework dog, but on helping Perri feel confident enough to pay full attention to her task.  When it takes Perri minutes to indicate the odor to me, she is overwhelmed and distracted by the environment.  Perri needed to learn to search for birch odor in a lot of different places.   She had to generalize the job and learn that odor is valuable everywhere.

For the past few months we have been doing birch ORT simulations in as many places as possible.  In the last month I noticed a change in Perri.  It hasn't taken her even a minute to indicate the hot box to me in the last month.   Something clicked, she has full confidence in her job...and she loves it.  She never false indicates, and that helps me feel confident.  Perri is a careful and thoughtful sniffer.

The Nosework world is way different than any trial I have ever been to.  Dogs are strictly segregated from one another.  Unless pottying or testing, the dogs need to remain in the car and it is preferred that they are crated.  The run order was posted outside of the testing room and only the "on deck" dog was allowed out of their car and waiting in line.  Perri was number 4, so we did not have to wait long.  When I saw Dog #3, a lab, enter the building I got Perri out of the car so that we could wait outside the door for our turn.

When Perri walked into the building I knew right away it was going to be fine.  She was loose and her tail was swaying.  When she saw her boxes she locked into them visually, in her way.   There was no doe-eyed worrying, no spacing.   I was very excited to see Perri walk into a building she had never been before, and do her job.  That was our main goal in our training lately.

Perri searched these boxes differently than she normally does in training!   Always, she goes up one row and down the other and if she crosses to the opposite side it is because she smelled the birch.   Today she was back and forth and you can see me being too close to her, and that is because I'm not used to the way she was moving.  I expected her to walk down the first row and kept stopping short for her to check the opposite box.   That's okay!  At first I was frustrated at myself for crowding her, but then I really thought about it.   I find it so interesting to see this change in her search pattern.  That is one thing that is interesting to me about Nosework.   When I watch my dog search, it's like watching her thought process.   Fascinating.  She zoned in on a box and gave it a nudge, that is the start of her alert behavior.  My friend reminded me to count to five seconds in my head if she shows interest in a box, don't just call alert immediately.  So, I waited.  When I saw Perri give that same box a second nudge followed by holding her nose at source, I knew it was the correct box.   I said "Alert", heard the judge say "Yes!" and rewarded Perri.  I swear she was proud of herself because she was wagging her tail and had to visit each person on our way out (there were two or three people in chairs along the wall near the exit door.)  What a ham! 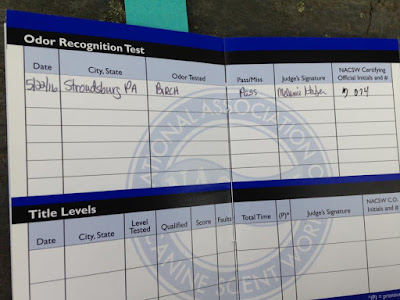 So, we're in this Nosework thing for keeps!   There is another ORT in September close to us, so we will test Anise and Clove then.  And we will continue preparing for NW1.  That is going to take quite a bit of work and I'm in no hurry.  We've been working on the different elements but now we will focus more on that.  Am I starting to like Nosework?  I think so.  Mostly, I am addicted to seeing my girl look so happy.  To seeing her tail wag when we walk to the start line.
Posted by dogbird daily at 6:49 PM