Time to continue mine and Molly's CPE Nationals adventure!

Friday we arrived at the Champions Center bright and early for the longest CPE briefing I have ever heard!   I had a good idea of which ring we needed to be in, when, as well as two other local friends in my group (There were 18 different groups - Molly and I were in I-2.)  All of the groups cycled through the six different rings in "rotations" and there were three courses each day.

Friday was: Standard, Fullhouse and Jumpers.   After Thursday I was feeling a little bit deflated, but we were going to get to run Fullhouse indoors and we would be able to build confidence before our last run of the day in the outdoor ring (Jumpers.)  Other groups had different run orders and different rings they needed to be in, but ours was as good a set up as I could ask for. 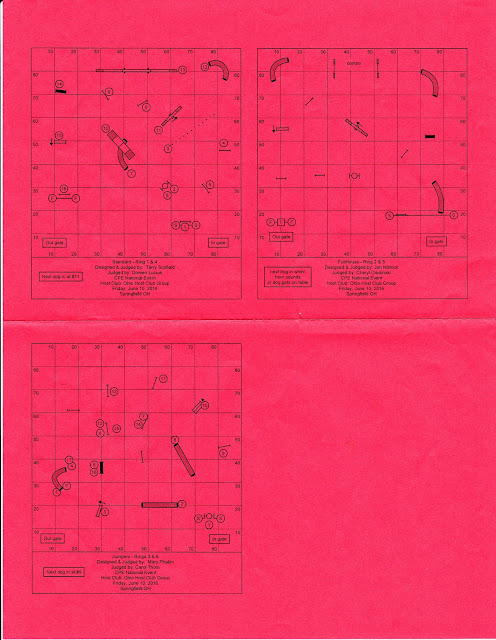 Standard was first.  Molly breaks her start line stay, triggering a completely ineffective and late rear cross.   We NQ in short order with a wrong course on the teeter (and a comedy-show attempt to get onto the wrong end of the teeter!)   Another wrong course after the weaves into the tunnel but hey, who cares at that point.   Happy with the brain-using on the dog walk contact!


Fullhouse was our typical relaxed, rack 'em up style.    We earned 43 points, one point shy of our personal best in Fullhouse.   This was our only Q of the day and the closest we came to being in the ribbons all weekend!


Jumpers was last, outdoors.   A lot of complaining all around about the Jumpers course.   I had more important things on my mind - keeping Molly under BagBrain threshold!   I was "as jumpy as a cat in a room full of rocking chairs" waiting for our turn to go into the ring.   She misses the tire jump and I could blame that on myself for not supporting it enough.   I just wanted to get going and have some success in the ring (from Molly's perspective, not a Q-perspective.)   It could also have been residual outdoor-ring stress, which she has plenty of.   The course goes okay, I decel too soon and she runs around the right side of one jump.   Some awkward handling on my part deciding whether or not to wrap her around the third-to-last jump.    I was absolutely thrilled with this run and how Molly cooperated with me in the outdoor ring!

Saturday we really started to relax into the game. 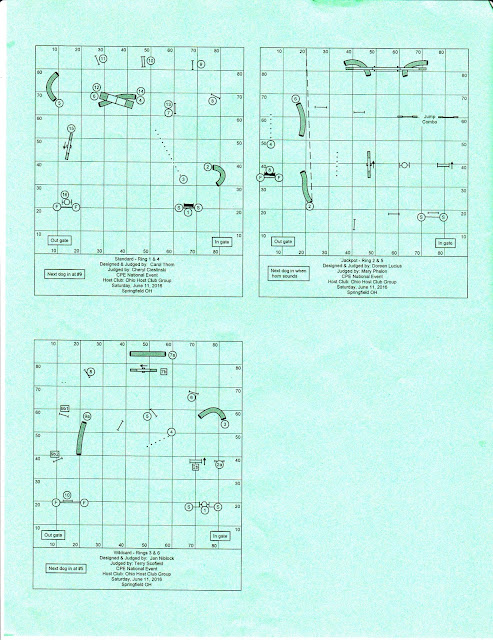 We had Jackpot first.   I hear that Jackpot at Nationals is always traditional, meaning that it is always point-gathering and you proceed to the "Gamble" when the buzzer sounds.   I hear it is always more challenging than your average trial's gamble, as it should be.   When I saw the weaves in the gamble I knew we did not have much of a chance but I had fun plotting and planning with everyone else, like my dog was normal or something.  (haha!)   My plan was to recall Molly to me after the 2-Tunnel.   Get her head.   Ask her "Do you See?" as we practiced in her weave class, get her to see the weaves.   And send her.   I recalled her but didn't have her focused on me enough, I was rushing.   She took the 6-tunnel rather than the weaves.   All in good fun!  26 dogs out of 700-something entered completed the gamble.

We had to do Wildcard in the outdoor ring next and I was feeling that this was the only course we could possibly earn a Q on for Saturday.   I felt very positive after our success in the Jumpers ring the day before.   Unfortunately a cocker spaniel under the shade tent had a reactive episode towards Molly and air snapped and lunged at her face.   This got her wound up and I had to move to the blazing direct 90-degree sun next to the ring.   She tries to run out of the ring and then is off like a bat out of hell when I release her, and that completely caught me off guard!   She had wilted considerably in the heat and was very pokey walking into the ring so I just didn't expect that.   I was terribly late with my front cross out of the tunnel and she completely fails to read it and takes a wrong course jump.   Now our teamwork was completely thrown off and after the weaves she takes a tempting wrong course jump again.   So, I just left - and I won't say I wasn't frustrated.   I hosed Molly off and put her cool coat on her and let her chill in her crate with the fan and ate some lunch.   We took a break from each other.

A long break until Standard.   Did some timing ring work and got to relax and watch some other teams, and cool off inside the building.   By the time it was our turn to run Standard, I was so sleepy and exhausted I said "I could lay down right in this dirt and go to sleep."   Molly felt the same way because she wasn't running too fast but...she surprised me with a Q!   Yay! 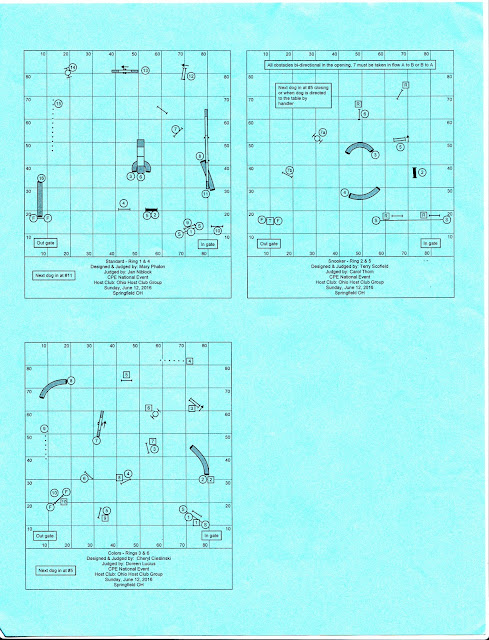 Our last day we started in the outdoor ring with Colors.  This course was a Q with 3 time faults for being overtime for....the weaves.   Her weaves completely fell apart and she was so stressed about it that she sniffed the entire way out of the ring (On her leash) and did not even want her post-run treat.   She was too busy with her nose glued to the ground, stress sniffing.   That broke my heart.   I gave her a treat and told her she was a good girl and asked for some nose touches and spins and then she really perked up.  A lot of question marks in our future regarding outdoor rings.

Next was Standard and besides a refusal in the beginning (non-scoreable in CPE and I'm pretty sure she thought I was sending her to the backside despite no wing)  it was a lovely run until the weaves.   She completely fell apart.   I tried to give her space, let her get her own entry and she stressed down.   We were 20 seconds over time.  I was very proud of us for getting all of the handling challenges earlier in the course - there were lots of tunnel discriminations and Molly did great with that.


Our last run of Nationals was Snooker.  Nice opening, late front-cross that I should have just "pulled" instead of and she was in a wrong course tunnel and we NQd.   Oh well.   The video cuts out but I will never forget Molly's joy here as she hits the table she did one of her big Tigger-bounces off the table.   She does that when she's really happy and I just loved it!   I was disappointed we didn't make it through the closing but I loved that moment!


So, we got one Q each day.   Three ribbons.   Molly never jumped out of or ran out of the ring.  We held our own on many of the courses (which quite a few people said were harder than is usual at Nationals.)   I'm glad for that, they should be challenging.   When Molly is really on, and the reactivity and craziness have settled down, then I get to really enjoy handling.   But until that point there is so much extra noise buzzing around in our heads.   I, we, we do the best that we can.   Molly is naughty and despite all of our hard work she has a short attention span, a low frustration threshold and minimal self control.   But she gives me everything she has, whenever she can.   She tries, I know that.

On our drive home Monday, between rest stops and state park stops (another post for another day) I watched Facebook.   Ribbon photos, placements, High in Trial plaque photos, awards issued and great successes attained by many teams that I know, and many teams that I do not.   There were none of these for Molly and I - but we did have those three ribbons.   One Fullhouse Q and two Qs I felt we barely deserved (toenail-in contact in Standard, two time faults shy of an NQ in Colors.)   But still, we did that.

But the most successful moments for me weren't those ribbons.   It was the people, at least two every day...and more...people from different states who had never seen Molly and I....people who could not resist going out of their way to approach me and tell me...

It is.   She is naughty, she embarrasses me, she humped me and bit me, she makes me feel so small and ineffectual.   But I am good at regaining perspective, I am good at finding the good.   My heart is so big with pride that Molly makes people happy.   Everything she does is so big, people just eat it up.   She is definitely no cookie cutter dog - you just can't help but stop and watch.   And laugh.   And love her.  Eternal gratefulness to this dog for being by my side for such a fun adventure.  She did not make it easy, she did not make it perfect - but she made it unique and special and she made it our's.   The very best. 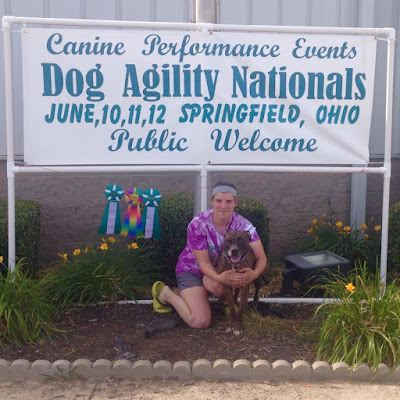 Posted by dogbird daily at 6:05 PM

Email ThisBlogThis!Share to TwitterShare to FacebookShare to Pinterest
Labels: cpe agility, cpe nationals 2016, it's all about the journey, molly