While Perri has returned to agility trials since her injury, it just felt like a little bit here and there.  (A few CPE runs before PCA.   One run in USDAA.)  The last weekend in June I had Perri lined up for quite a few runs on both days of a CPE trial.   The testing is over.   The runs here and there, both at 20" and 24.   She is staying sound, and we are finding our feet again.

We ran at Flexible Flyers, where Perri has historically had zoomie meltdowns on the dirt.   This trial was no different.  We started with Jumpers and while Molly and I laid down a really nice smooth run with one off course tunnel, Perri was off like a shot and spinning and barking at me.   I stuck with the usual plan.   I become very still and hold my palms up and ask Perri to come to me.   We had all the time on the clock.   The crowd loved her silly poodle antics and I have to admit, I was smirking.   Hey, it's funny!   I wish I had a video of both dogs in Jumpers.  Perri finally came back to earth and complied with my request to do the closing two obstacles on the course, and was given lots of treats to thank her for her cooperation.

The rest of the day Perri was a normal agility dog.   We ran Wildcard and both dogs were unfocused and stressed.   Both dogs did not have very awesome weave poles.   With Molly, I saw this as a side effect of the weave breakdown at Nationals.   With Perri...did she need more confidence?  I let Perri do all three "A" obstacles (in Wildcard you must choose three times on the course between an "A" obstacle and a "B" obstacle, "A" being the easier option.)  I wanted to keep things flowing after the catastrophic Jumper-Zoom!


Both girls qualified in Snooker.   Molly was getting tired for the day and running a bit slower and that's always nice for my confidence!    Perri was a little bit unfocused, she was a little "funny" all day long.


Perri was finished for the day.   There were two rounds of Standard left and when I entered, I did not want Perri to need to acclimate on the dirt (which she has struggled with at this venue.) as well as 12 weaves.   Standard could wait.

Molly did well, continuing to be slow and tired!   She did pop out of the weaves but on the second set of weaves I felt like she was becoming more confident. (In the first round of Standard, the weaves were split into two sets of 6.)  She just enters them and goes.   Just that simple!


On Round 2 of Standard we did a really nice run with everything clean but a wrong course tunnel.   (It was a discrimination, weaves vs tunnel and....well.   Come on!)  I was disappointed but when she came out of the tunnel I sent her into the 12-poles and she entered and stayed in and then picked up some incredible speed.   That made my day!  And the wonderful photographer, Rich Knecht Photography, captured the moment.   Molly, intense, digging in, really performing the weave poles.   This photo is worth a million dollars to me! 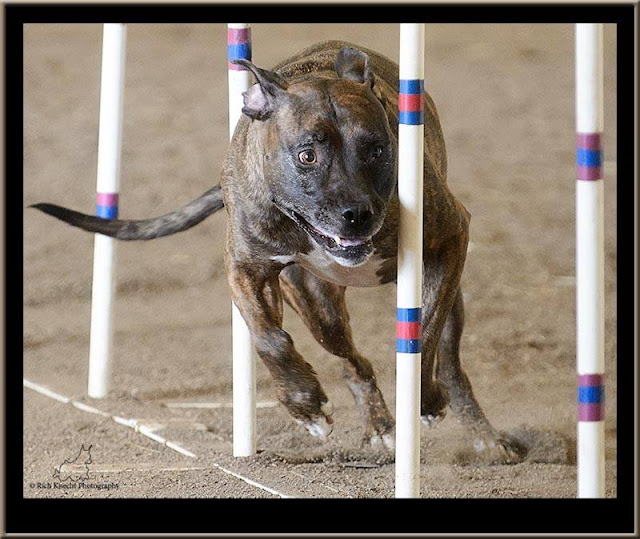 Sunday was a far better day for Perri.   She knew what was up, she knew the surface and her focus was much improved.   I can only hope that this continues for her at this trial site, since it is one of our most frequented venues!

Molly started her day in Standard with a Q (her third for the C-ATCH3, but who is counting?)   The course started jump jump, serpentine to tunnel trap.   It was Standard and that tunnel trap would have had me spinning in anxiety just half a year ago.   But the beginning of this year, I decided No More Bad Mouthing Standard.  Somewhere since January, this must have become effective.   A dear friend of mine, who I usually only get to see at trials, couldn't believe the change in my attitude towards the Standard course.   Even she was more concerned over a handling challenge than I was.  (All I could talk about was that weave pole photograph, actually!)   It's not that I was not anticipating the challenge ahead and it's not that it was not a challenge for me....it's just that I seem to be accepting that I just want to enjoy handling.   Simplify.   My own worrying was suffocating me this past winter and things had to change.   I think that I am getting somewhere, I am trying so hard.

Next was Snooker.   Molly was in what I call "good girl" mode.   She was slow and hot and handler focused rather than obstacle focused.   We qualified in Snooker - and Molly earned her Level 5 Snooker Championship (15 Qs in Level 5 Snooker.)  Onto Level C for Molly!   Perri did a lovely Snooker opening and closing but we struggled with the weave poles before the ending.  I finally pulled her out and did my "claw hands" to lighten the mood between us - and she goes right in and completes the poles (after the buzzer, and leaving us one point shy of qualifying).   A reminder that my pressure is the issue.

Colors up next and both girls qualified.   Perri did struggle with the weaves and that made me sad.   I was just about miserably depressed over her weave poles after this trial.


The last two runs of the day, Molly got a break.   Non traditional Jackpot and it was not a hard one.   Perri was running nicely and playing along well but the buzzer was not ringing.  And not ringing.  And not ringing.   It finally did and Perri (and I!) had stressed down.   We did our closing (You just had to do a 5,3,1-point obstacle and then the table.)   We ran out of time due to stress sniffing, and even if we had enough time, Perri skips the 1-point obstacle.   I was extremely frustrated with the timer but I have made mistakes while timing myself   Stuff happens.   I didn't care so much about the NQ but I did care about being out there without a plan and stressing my dog out - Perri is very delicate!   I did count on my video and I was out there for more than double the allotted time before the buzzer rang.  I do wish that the timer would have admitted that a mistake was made and that the clock was never started.   Perri and I have had that happen to us before and we were permitted to re-run.


With no lasting trauma, we finished out the weekend with a nice Fullhouse run and a happy poodle!   I am so glad to be able to run both of my girls.   It is a treasure to have them both at one trial, enjoying a whole weekend of agility together.   Our trio is united again, as it should be. 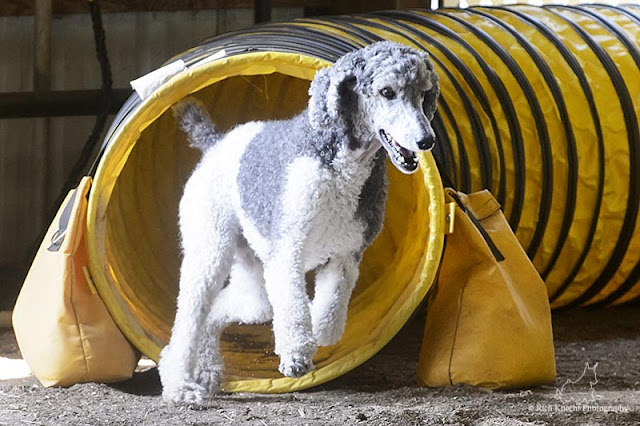 Posted by dogbird daily at 8:09 PM