Today Ein and I did our very first obedience match at Open Level.  I realized today that I am getting better at knowing what I want at a match.   Initially I did not have a plan, I would just show up and do the routine...have no Plan B for if things went wrong, that kind of thing.   Today I did not want to do the Open routine.

Today I wanted to test the waters of where Ein is at with his skills.  I did choose to do a heeling pattern, but that was mostly so that I could practice my striding - I tried to take shorter strides and it really made a difference for Ein.   A "corgi person" advised me to give this a try after she watched me heel Ein at our title leg for his CD.

The main goal of today's match was to see how our retrieve is looking under the pressure of a judge in the ring.   I was quite shocked that Ein went out strong and rather fast on the Retrieve on the Flat and returned at a very close front!  (After several false starts while I was fooling around with his platform - and I didn't even end up using it.)   Retrieve over High Jump was lovely and Ein actually started to return quite wide, I thought he would go around the jump but...he corrected himself!   I was super impressed!
We repeated both exercises at the end of our ring time, two more nice repetitions.   Every time I sent him out he gave the judge a glance and near-stink eye but I can see he is confident enough in his job now despite "judge" pressure - on the right path!   Of course, there is one "little" problem - Ein is holding the DB soft when he returns and is dropping it as I reach for it.   One time he actually started mouthing it as I moved my hands towards him, and when I pulled back to give him a chance to regrip, he dropped it.   No big deal, just information!   We will focus on this and see if there is an improvement at our next match.

I skipped the Figure 8 and the Drop on Recall - though I probably should have done the DOR to see what I had.   I did do the broad jump and we did it as we will see it in CDSP and Ein ran right over the top of the broad jump with a loud clatter and grinned up at me.  "Aren't I great?!  Where's my treat?"   Ha!!   Ein "knew" the BJ at one time, we trained it when he took foundations agility class and he remembered that long enough to perform it at a rally trial and a rally B-match one time (the only two times I saw it in rally-o ever!) but that was years ago.   I thought he would have remembered just fine, but no big deal - we will do a little tune up and see how that looks at the next match!

I do wish I had done a test drive of the DOR to see what I have.   Ein does that exercise really well in Rally-O when it is included in a Level 3 course, we have never had an issue with it but I do need to see what he will do in an open ring (no rally signs) and a longer distance.  Next time!

So, we have some direction, we have some things to focus on.   Ein will need a Go Out for CDSP Open but we have been hard at work on that and things are looking nice - we may try that at the next match.

After the match, I had a geocaching agenda.   First stop, a geocache on an island accessible only by boat or wading.  I was a little intimidated by wading at first, because the half of the river closest to parking was about waist deep and the current was strong.  I would not have minded just swimming across but I had to take my phone so I could, ya know, find the geocache. (It was a reasonably big island, not having the coordinates would have been like finding a needle in a haystack.)   Then I had Ein and Perri with me, and I had to make sure they could handle the task.   So in we went.  I actually leashed Ein up and ended up holding his collar the whole way across, the current was very strong indeed for him and even for Perri - she actually swam across totally sideways, wasting energy trying to swim upstream to me and doing her yodel the whole way across because she couldn't get to me!   We reached the island no problem and the dogs got to run around off leash, fetch sticks and play while I found the geocache quickly. 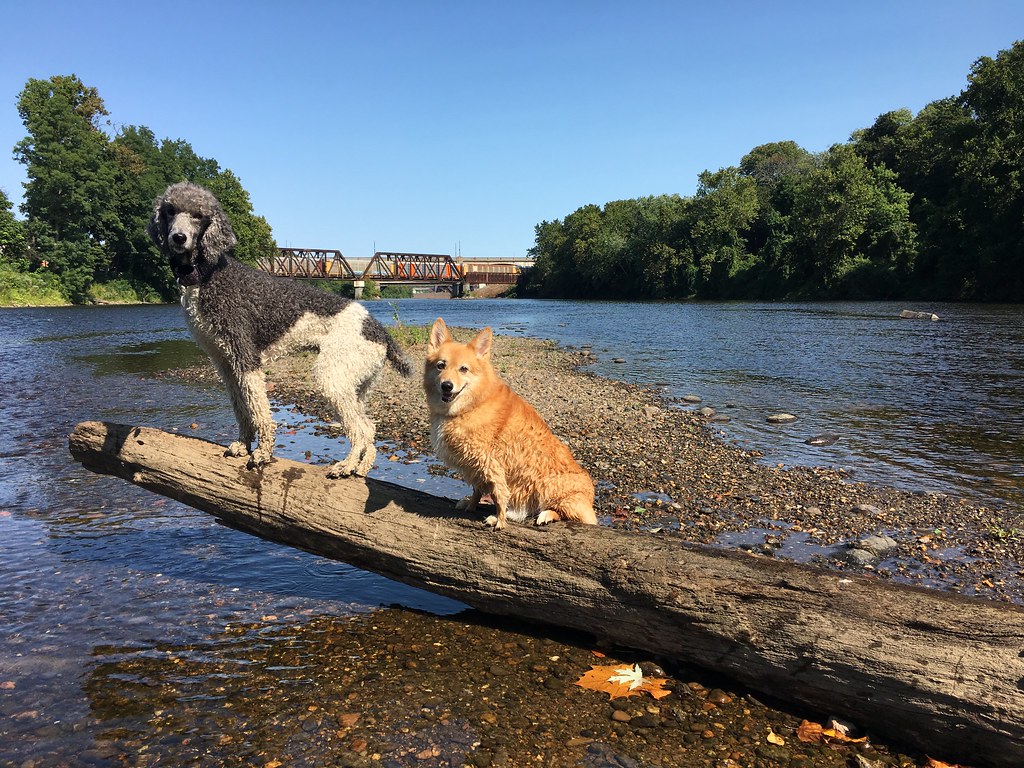 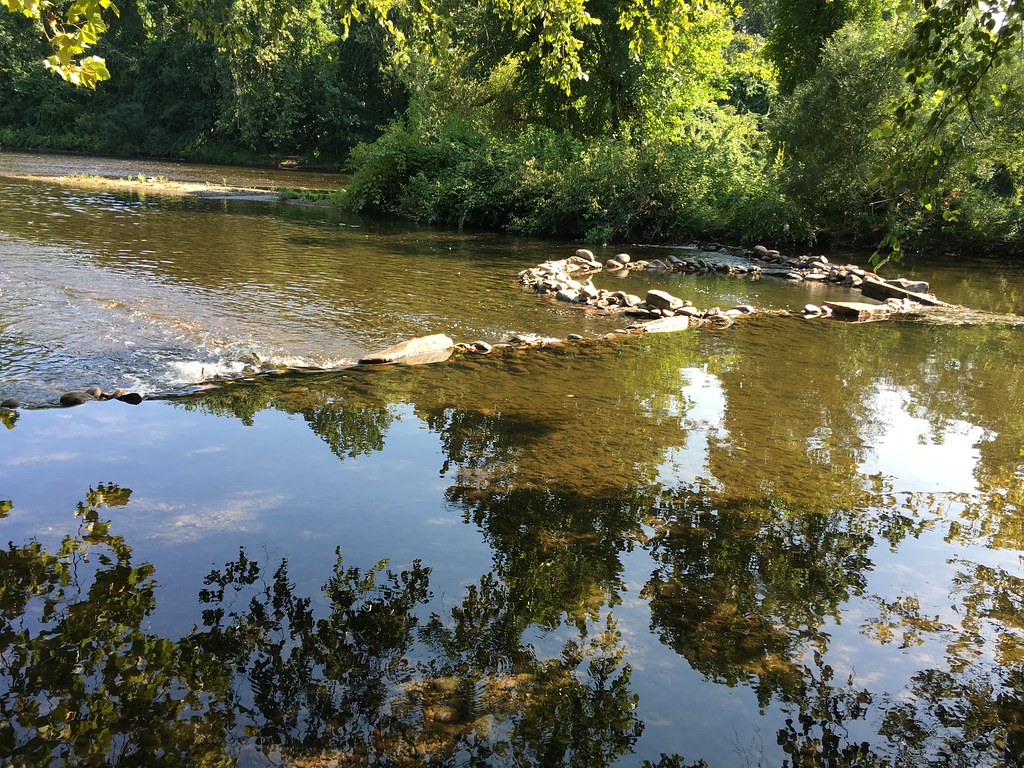 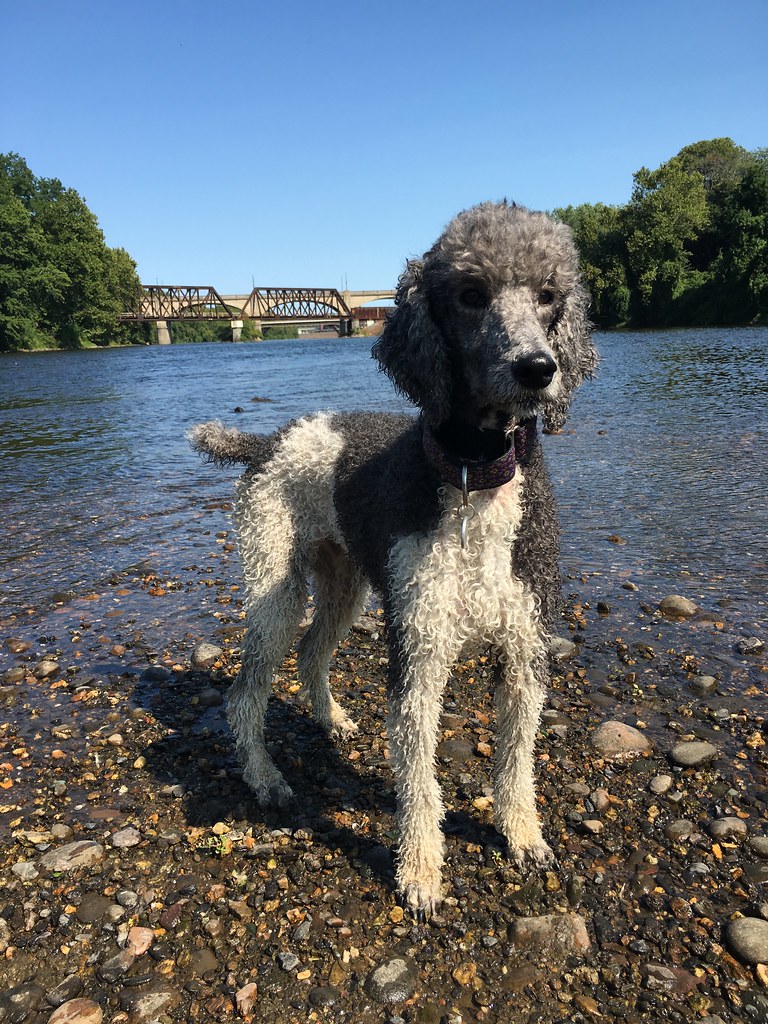 I really did not want to wade back!  This time I walked upstream as far as possible, so that the dogs could swim across and though the current would pull them downstream, they would sort of be swept to our entry point nicely.  I left Ein off the leash this time.   Both of them, especially Ein, kept looking back after me.   It is so nice to have dogs who are trained, because I kept telling Ein "go on!" and he would turn away and paddle for shore.  This was way more preferable than him trying to swim upstream towards me, and it was good that he understood.

Our next stop was called "Stephen King cache" and it was at a pet cemetery!  For the geocache that I was searching, you had to do some simple math based off of dates on some of the memorial stones in the cemetery - and of course it was a nice walk in a level field for both dogs.   Ein was happy to sit and rest while I worked out coordinates and math. 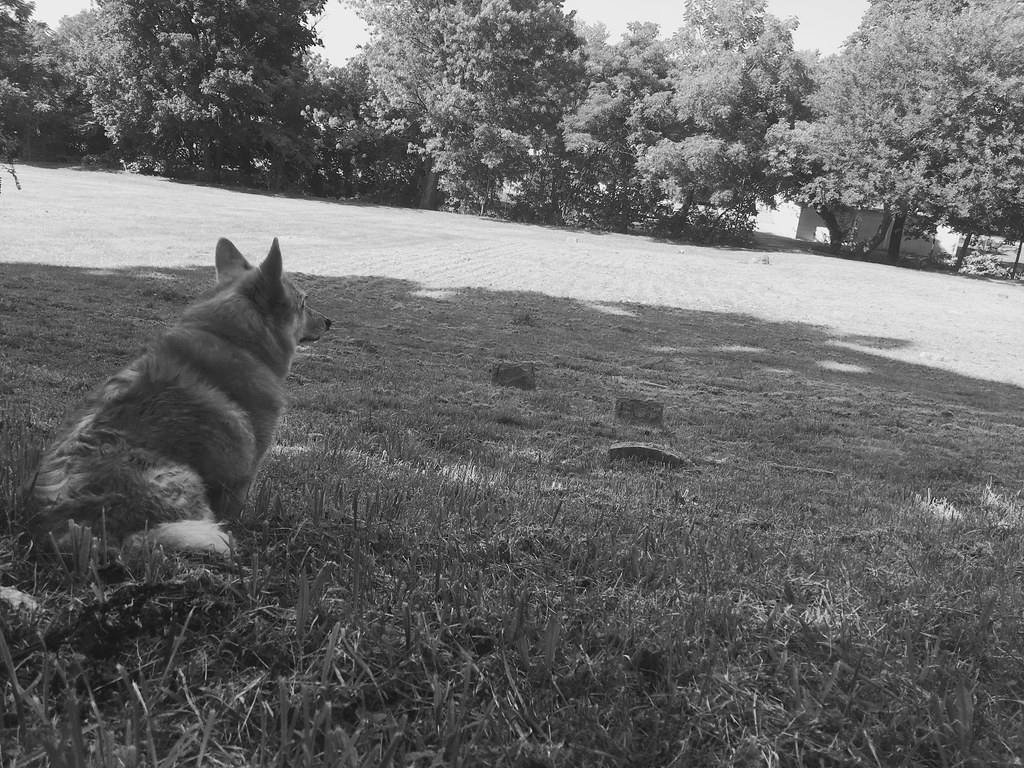 Our last stop was for an actual lengthy walk on the trail along the Canal.   Ein got to be off leash nearly the entire time and we had a very nice 2-ish mile out and back walk with good evening sun. 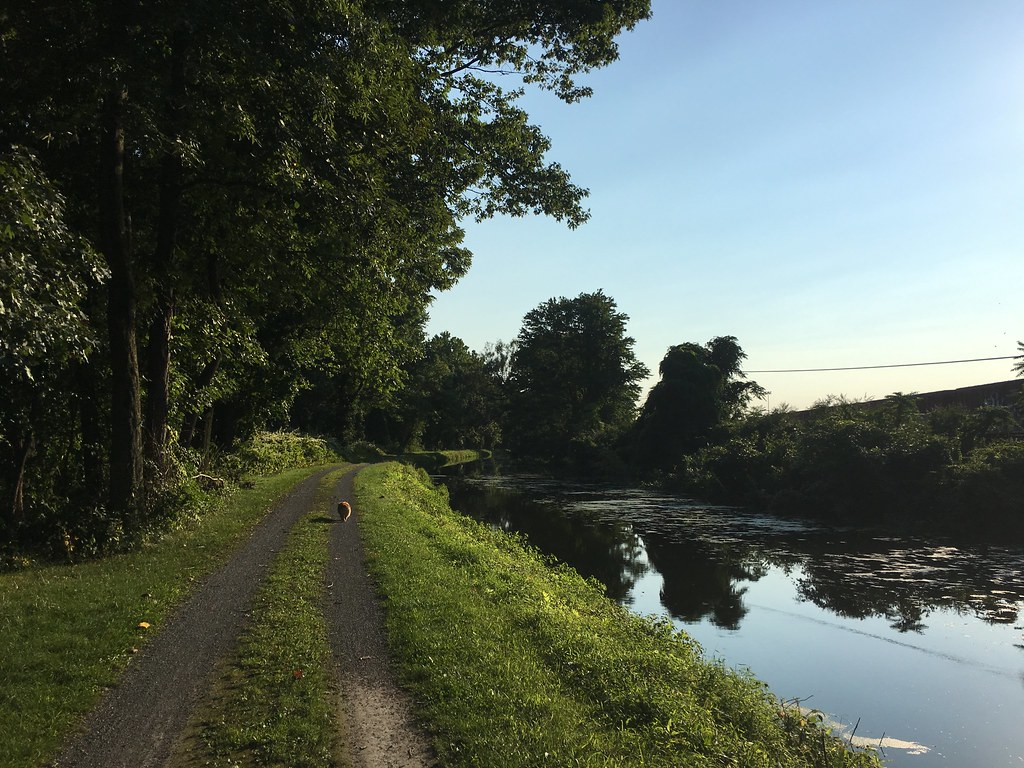 I am so grateful for everything I have with Ein.   He is not ancient, but he is not young.   Yet he is learning advanced Obedience exercises and performing them and wanting more, he is swimming a strong river and he is not afraid and he still had plenty of "gas in the tank" for our canal walk.   His body is not what it used to be, and towards the end of the day I could see his rear leg shaking - but he has so much heart.  Today was one of those days where I let him "run it into the ground" activity wise.   I gave him a rimadyl when we got home and he is doing well.    Walking through that pet cemetery today I saw all those little memorial stones, all of those pieces of somebody's heart that has left this world and I know that someday I will not have this incredible little dog by my side.   But on this day, today, I did - and it was one of our countless Best Days Ever.
Posted by dogbird daily at 6:25 PM