After a longish break, Ein and I returned to the rally-o ring last night! No particular reason for a long break other than we have been busy with agility. We arrived semi-late due to some horrible traffic that I did not expect. Prior to that, with plenty of time, I stopped for a tenth of a mile walk to find a geocache. This particular geocache was my 1500th find and it was a "Challenge Cache" that you may only find if you have completed your Difficulty/Terrain grid - it was a big deal! The hard part was meeting the qualifications, the challenge geocache itself was not hard. Except for the part where we walked right through sticker burrs to get to it. And all three of us, Ein Perri and I, got loaded. It sort of took away from the excitement of the moment.

I hate sticker burrs! We got back on the road, I found a gas station: got gas, air in my tires, Swedish fish and a 99 cent plastic comb. I should have left and brushed out Perri's fur at the training center...this was where I lost my time. I was laughing at my self being at a travel plaza combing a poodle's fur for a dog show...what have I become? Note to self: keep a dog comb in the car! Anyway, with all of that lost time I discovered heavy construction and an overturned tractor trailer on the highway we had yet to travel. Sigh.

I still arrived on time, but barely...and Ein was the second Level 1 dog. He was stressy and I had to double command his "Stand", but overall we had a nice time in the ring. I felt very bad when I gave him water after his run and he drank the whole bowl dry...he must have been so thirsty, poor boy! Level 2 was much better...it was the same score (a 204) but he was just so much more relaxed and happy. Another re-cue needed on the Stand though! Stand from a sit is not always comfortable if Ein is sore in his hips, so that is something I always have in mind. We aren't going to sweat the small stuff.

This training center accepts day of show entries so...all day long I was entertaining the idea, and I decided to go for it. I entered Perri in Level 2A. It has been years that I have waited for this, and truly I let go all desire to do rally or obedience with Perri. It's just not her game. Still, why not? She has the skills, it's a quiet trial. The first sign was a fast pace, ugh. But Perri was overall super happy, tail up! When I cued her moving down she dropped immediately and with sass! She was a little laggy in some places but as we continued through the course she really started to....enjoy herself! She showed her brother up with her gorgeous kick back stand...and when we got to the bonus it was Halt-Leave Dog-Down. Downs from a distance have always been a struggle for Perri. I turned and cued her....and down she went with no hesitation! Wow! A 207/210 and beat her brother by 3 points! I was absolutely blown. away. And so proud of her, especially for those downs. I have no idea when, if, I will do more rally with Perri and I don't care.... We had fun last night!

The last course of the night was Ein in Level 3 and he finally did his Stand on the first cue! Finished the evening with a 205 and a second Triple-Q towards his ARCHMX. What a boy! 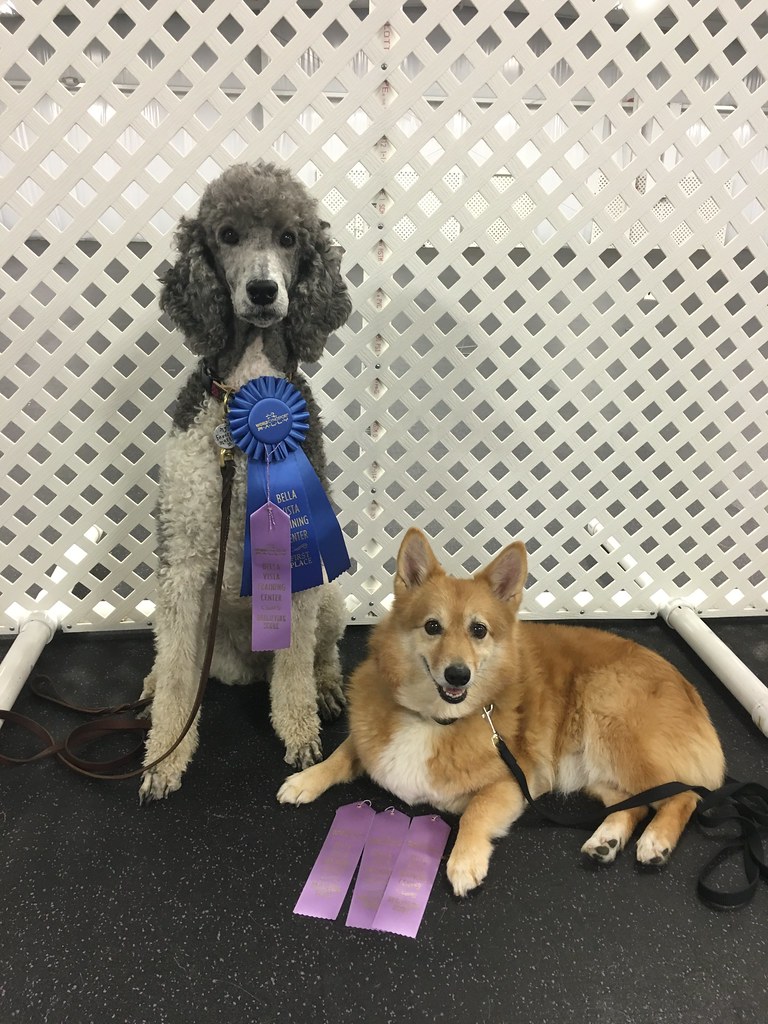 Posted by dogbird daily at 6:40 AM