Last night found us at another World Cynosport Rally-O trial.   I can never resist Friday evening trials - get done with work and go to a dog trial!

Let's start with Perri.    What began as a leap of faith at the last Friday evening trial we attended at this training center, it was time to finish.    I entered Perri in Level 2A in hopes of earning her Rally Level 2 title.   I looked back in my records, Perri earned her Level 1 title in July of 2013.   That's three and a half years ago!   I simply did not feel that Perri was ready.   And she wasn't.   Her ring stress was considerable and while I could have easily pulled her and coaxed her around the course and qualified with low scores...I was not interested in that.   Perri is capable of a beautiful performance and until I knew we could go into the ring under those terms together - I wasn't in that kind of rush.

We did start off our time in the ring with Perri decided she wanted to flirt with the male judge before beginning!  I had to take her collar and guide her to the Start sign.   From there on out it was gorgeous.   I actually barely talked to her while heeling her, her turns were lovely, we had to circle around the cones and Perri was latched onto heel position and bouncy, watching me the whole time.   She had three downs on the course and there was no hesitation, Perri is happy to do her downs now!   No more fear.   The bonus exercise was like some kind of Final Test.   Perri was left in a sit, she had to down with me 10 feet away.   At a trial.   For a moment she lost focus, looking at the dog about to come into the ring.   I called her name and she began to recall into me but as soon as I saw her butt come up I cued "down!"   And she hit the deck. 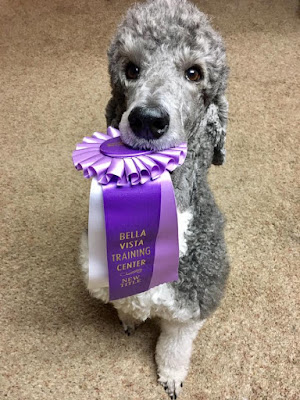 A 209/210, (no doubt losing the point for standing up in the bonus) and first place out of a decent sized A-class.   Pinch me, am I dreaming?!   I waited a long time for this.   They say "never give up", well giving up gave my dog some breathing room.   She needed that breathing room.   I was suffocating her with my desire to do rally-o and obedience with her.  I was trying so hard, when what she really needed was time.   Temporarily, or indefinitely.  Taking time off from working hard on a sport that I wanted gave us time to work on other things.   Things that actually helped Perri.   Empowerment over her environment, scent work, and building her confidence in agility.   I am very proud of Perri, I am very excited for what our future holds.  An obedience match may be in our future - test the waters and see if I've got a dog who would like to be a Companion Dog!  I think that I do.

And Ein had a really great night!   We were much more in sync than we were at last Sunday's trial - my suspicions were confirmed!  A relaxed mind is best in the ring.  Ein sailed through the first trial and earned his 7th Triple-Q - even surprising me  his first perfect 210 on a Level 3 course!  The second trial began at about 9:30 at night, so we were both getting tired.   Regardless, he scored a 210 on the Level 1 course.   My night owl!   In the Level 2 course he decided if I really want him to "down" I can tell him twice, so we lost 6 points for re-cues.  This is becoming A Thing and I am not sure what to think about it.   The obvious culprit is arthritic pain.

The Level 3 course was heart stopping!   The whole thing was great, except one little thing - our old nemesis the Directed Jump.   I saw it when I was walking the course, there was a rally sign sitting by the jump standard.   That sign was right in a small dog's line of vision - I suspected during the walk through that Ein would not be able to see the jump.   Sure, he could see half of the standard, and the standard on the opposite side.   But it was far from the picture he was used to seeing.    To him it looked like I was asking him to run around the sign and wrap it - a skill we have not practiced!    Sure enough, I cued him to take the jump and he wavered and came running into me.   I told him to Stop! before he crossed the jump plane, backed him up and reset him.   I cued him two times and he narrowed his eyes at me.   He gave me a stink eye Molly would be proud of.   I looked at him, I said "Oh Ein."   I turned my whole upper body dramatically nearly 90 degrees and pointed with both hands and cued him again.   And my sweet old loyal dog, who had no idea what I wanted him to do, got up and trotted in the direction I was pointing.   And took the bar!   His face lit up when he got there and he was grinning from ear to ear when he came into front.   Thank goodness you can give treats in the ring in Cynosport because I gave him one for sure! 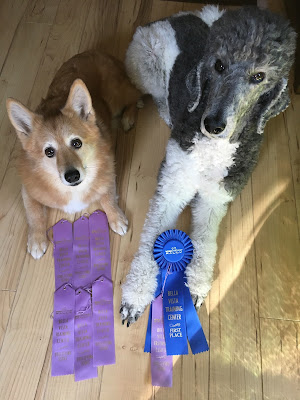 Posted by dogbird daily at 8:18 AM