It was so refreshing to return to our home turf and play some agility today, with much cooler temps in the upper 60s and a nice breeze.    Ahhhhhh!

Molly and I are still chasing that P2 Jumpers leg and sure enough today a wrong course tunnel snagged us up.   I did a reverse spin but was late on it, so my handling did nothing to keep her out of that tempting tunnel.   Another day, Jumpers Q!


Perri still needs everything in P2 but Jumpers, so we played Snooker today.   Perri was a very happy and motivated girl on this run and it made me feel great to see her enjoying herself!


Perri also played Pairs Relay today.   We had a pretty nice run, but Perri was a bit worried about the baton.   Then in the back of the ring she ran into my elbow and that startled her.   When she looked up and saw me holding the baton she cringed away.   I knelt down just to comfort her and we continued our run.   The judge gave us a Standard fault and claims that I touched Perri.   That put our team .63 seconds over time.   I do not agree with the judge's call, but her word is final.
To add insult to injury, when I tried to put Perri's leash on I foolishly forgot that I was holding the baton still and she crouched on the ground in terror until I realized I needed to put the baton down.   That made me feel bad, because Perri and I are working hard on her comfort level with having equipment of any kind put on her.


Last of the day was P2 Standard and I had to run both girls in it!   Since they are the same jump height they were "competing" against each other, which I think is a first.   We thankfully had about four dogs in between our two runs and I had them both out warming up so I wasn't running Perri cold.   There was a wrong course tunnel challenge, which I kept Molly off of by rear crossing the jump before and calling her name.   Her weaves I actively caught myself about to clap, and stopped myself!   I am really proud of that because I didn't used to be aware of the habit.   I ran ahead of her saying "Go, Go!" which Molly likes.   She qualified!    Perri went next and we had no trouble staying off of the wrong course tunnel and Perri did all of her weaves.    They both got a P2 Standard Q and both got their weave entries, very exciting!   Molly in 1st place with a faster time.

Most rewarding of all was that a family had come to watch another competitor and they were standing outside of the exit area.   Both of the girls enjoyed being fussed over and praised by this family right after their runs.   They were very impressed by Molly's friendly behavior.   Breed ambassador! 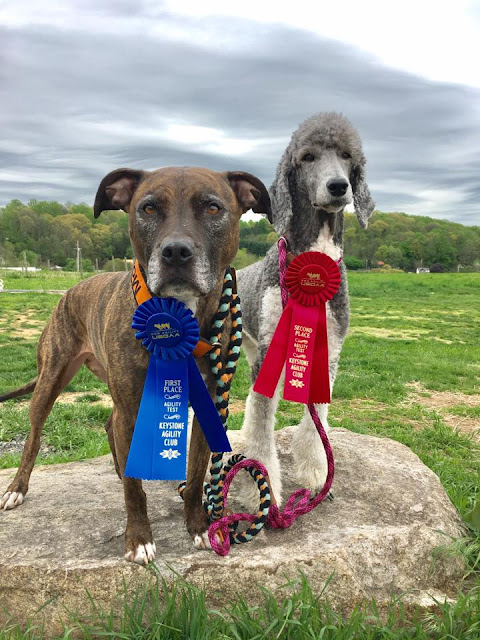 Posted by dogbird daily at 4:55 PM