I was really excited about my four day weekend.   Four days, all three of my dogs, three different sports.   It had the makings of an amazing weekend.  And then I got my ass handed to me.

Friday was AKC Agility with Perri and it was absolutely pouring down rain and freezing.   We were indoors but I still got wet and I was still freezing.   The last time we were at this trial site, Perri shut down, so I did not know what to expect.   In standard she was an absolute clown and refused to weave.   In JWW she fixated on The Door and shut down.  Okay.

We went on an awesome five hour long hike and found some really high rated geocaches and honestly.   It was probably the best part of my weekend.   One thing is for sure, Perri is an awesome trail dog.   She stays close, she never lags or runs out of energy and she clearly enjoys herself. 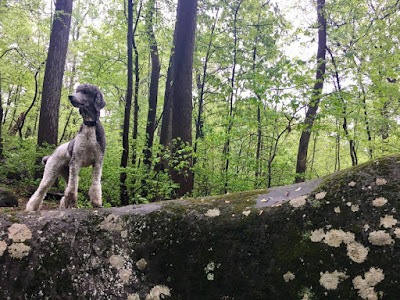 Saturday was supposed to be better.   Molly was joining us for more AKC Agility!   Standard was pretty good, with good focus but no weaves.   JWW she was hot and cold in the ring so we left early to preserve motivation.   Perri will take a month off of agility trials and will be dropped to Preferred 20" in AKC.   She seems to like that jump height better all around.   Perri used to love the trial site we were at, and now it just seems to make her worry.

Molly had a "fun" day.   Wrong end of the tunnel in the FAST send, blew the dog walk to grab a wrong course tunnel in Standard and in JWW also made a beeline for a wrong course tunnel during a discrimination challenge.   I'm sure I was not clear enough to her, but Molly doesn't need much muddying of the handling to choose a tunnel over a jump.   Honestly, I had stopped expecting any Qs in AKC Agility.   It just didn't seem like something that happened for us.   So when Molly got a Standard Q last month, it sort of messed with my mind set.  No matter!   Molly was running fast and happy with decent weaves (missed entry in both classes, though.), so.   It's cool. 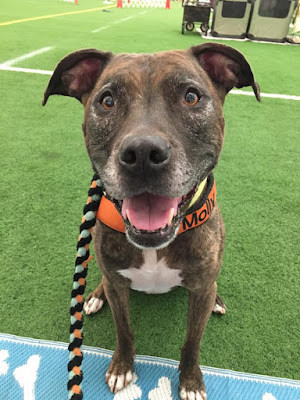 Sunday was Ein's turn in CDSP Obedience.   I felt really confident going into this trial.   Ein and I had worked on his rough spots from the last trial.   (To review: ticking broad jump, no down on the drop on recall, and anticipating the retrieve.)  We NQd both trials.
On my first dumbbell send I clipped Ein's nose when I gave him the hand signal to retrieve his dumbbell.   He gave me a wounded look but went out to the DB, did not retrieve it until I gave him a re-cue.   Same with the retrieve over jump.   With the Go Out, he acted like he had never ever heard of such a concept in his life.
The second trial, Ein broke his stay on the drop on recall.   I was floored.   Ein has always had rock solid stays and in nearly five years of Rally and obedience trialing he has only broken one stay and it was when he was very stressed.   Good retrieves, though I threw much shorter since we had already NQd.   The Go Out again, total confusion. 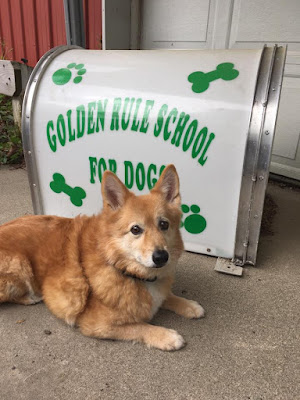 I was very shocked  by some of Ein's errors.   At first my brain started whirring: maybe we really should join a class to work on these exercises.   We do a lot of training at home and at parks or parking lots and stores, but never in a class room.   But here is the reality of it.   Ein is 12.   I don't want to amp up his training.   He loves working on exercises together and training, but at his age I don't really think it is right of me to intensify our training.   I am also starting to wonder about his eye sight.   Just this year he has started bumping into rally signs in the ring and that is something he absolutely never used to do.   And it seems like when I throw the DB too far out, he runs out after it but then loses track of it.   He runs around and around trying to find it and sometimes he does, but then he does a nervous nose touch on the DB.   I don't know.   And the Go Out, he just didn't seem to see his mark at all - just ran out a few feet and stressed.   Maybe he doesn't get the concept at all.   In brightly lit areas, though, he does not seem to struggle.  I suspect the judge's proximity was also a factor, she was standing very close.

So.   Right now I have decisions to make.   At this point, if I trial him again, it will be at our old training club.  Period.   He is familiar there, he was not stressed there in January.   In fact, he was clownishly anti-stressed!  And perhaps at 12 years old, the stress of a trial site he had never been to was a bit much.   No more new trial sites, buddy.


Now I thought surely today, our bonus trial day of Barn Hunt with Molly would be a surefire Q on at least one run!   The Barn hunt trial was outdoors on the grounds of a hotel resort.   We were entered in two rounds of Open and up for Molly's title.

Nope.  Not this weekend.

Molly would not indicate.   Then she false indicated.   Then she would not even think about sniffing the rat when I showed it to her.   Our second trial we did get one rat, but I called rat on a litter tube.   Molly gave it a good long sniff and I thought that was going to be as good as it got.   Molly had always been so reliable with her indication if I asked her about a tube.   She would not indicate on a litter tube if I asked her, and is always willing to check and indicate on a rat.   The only thing I can attribute this behavior to is the noisy construction site, complete with jackhammer and banging metal sounds, at the property neighboring the hotel resort.

I'm good at rolling with the failures and accepting them.   It's not all successes and I never expect it to be!   But this was a bit embarrassing for me, I have to say.   I haven't felt this foolish since that September in 2014 when I entered Perri in Novice A and we were woefully unprepared.   Perri has developed a new, confusing and upsetting issue and we are going to work on that.  Molly was Molly in the agility ring, but her behavior in Barn Hunt really surprised me.  It is frustrating to continue fighting her noise phobia in the Barn Hunt setting and I am concerned she is developing a conditioned response due to how many times she has been shut down by gunshot or similar sounds when trying to play BH.   And with Ein, we worked hard on his problem areas but new ones came up - but now I am guilty of perhaps overlooking his age and taking advantage of his enthusiasm and not helping him respect his limitations.   It all caught me off guard.   I feel like a failure for not training my dogs well and for not assessing them properly.   Add in Perri's not so awesome nosework trial last weekend, and I'm feeling pretty low.

Right now some retail therapy feels in order (I'm thinking a set of Fit Bones!) as well as a small break from trialing to enjoy some extra hiking time and reconfigure our minds.
Posted by dogbird daily at 5:35 PM