A Visit to Freehold! Molly CA!

Today we check off another item from Molly's "bucket list": finish CA title.   Does Molly care about a CA title when there are bags to be chased?   NO!   But it means something to me to have her efforts (ha.) honored, and Molly isn't going to turn down a chance to chase her bag!   Without a doubt, Molly  passed her third "Coursing Ability Test" and gets to add the CA (Coursing Ability) title to her name.  She even bit a big hole in the snow fencing while being rudely asked to wait her turn.    Yikes! 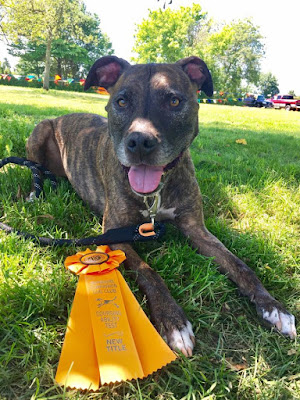 We also signed up for AKC's new game, the "Fast CAT.", a 100 yard straight dash that is timed.   They use electronic sensors, the same as we use on agility courses, to start and stop the time.   Molly predictably earned a qualifying round with a speed of 29.22MPH.   Yeah!    And since they were accepting Day of Show entries, and Perri has a new found love for the bag - I let Perri have a Fast CAT run as well.   Perri did not beat her older sister, but she did qualify as well with a respectable 25.6 MPH!   She was barking at the bag, and when the gate steward told her to stop barking, she stared at him for a half second and started barking at him.   Ha!   You tell him, Perri!   You can earn a title if you get a certain amount of points (based on your dog's MPH), but mostly I wanted to see what the girls' speeds would be.   Future Fast CATs remain to be seen.

And now, the lure coursing song....

Perri also got to play some agility, since there was an AKC agility trial being held on site.   This is Perri's first trial at Perferred 20" and she seemed happy about the change.   Open FAST was first and she was the only Open dog to qualify.   She did get a little silly with some short zoomies but settled down quickly and did the jump-tunnel-jump send with ease.   Thankfully, Perri does not usually take obstacles when she zooms (unlike a certain Molly I know!)   Standard was very decent, unfortunately no weaves and a bobble after that but otherwise really nice.    This is only Perri's second outdoor trial so I'm just gonna go ahead and blame it on that.    JWW Perri completely shut down after the third obstacle so we left the ring early.   I asked her to do the last two jumps and that made her tail wag so I feel like we reconnected on my terms.   When Perri gets like this, it makes me sad but it just seems to happen with AKC Agility and my mental state right now is to just stop doing AKC Agility for now.   Though I think a lot of today was that it was a new experience: outdoors.   Perri has done exactly one outdoor trial and our first (and last!) outdoor agility trial was the one before I pulled her for her injury.


Still, "Q and Blue", baby!   I see everybody on Facebook bragging about the "Q and Blue" so we get to do that today even if it is only on FAST. 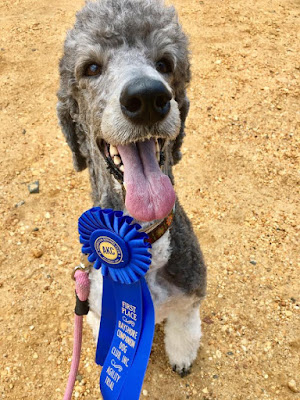 Molly is broken!   The lure coursing was not the cause, but it was the "straw that broke the camel's back."   I confess, over the last two weeks I have witnessed about three episodes of Molly holding her left paw up.   Each time I checked her foot, found a thorn or torn up skin and thought that was the cause.   She did it in agility class two nights ago and I started to Feel Worried, but when I got home her one toe had skin chewed up and I thought, "Well, maybe that's it." especially since she recovered quickly to a normal gait.   Weak.   Wishful thinking.

Today's lure coursing was fine, and I cooled her down very thoroughly afterwards, but when I got her out of her crate to potty, Molly was extremely lame on her left front.   I think I hoped against hope this wasn't coming, but here it was.   By some stroke of luck, there was a rehab vet at the trial working on dogs.   Molly got massaged and manipulated and evaluated.   And he pointed out the bump on Molly's left forepaw, "This is not normal." 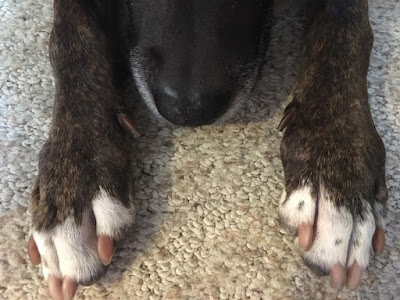 On Molly's paws, she has arthritic deformities that the vet says he often sees in hard hitting, older agility dogs.   The tendons and ligaments suffer micro-injuries over time, the body floods the area with calcium and tries to heal and stabilize itself....and then you have this deformity on your dog's poor abused paws.   Molly is hard on her body and it is showing big time.   Molly is also very tender in her shoulder, whatever tendon is in front of the humerus/scapula, Molly was reacting big time to manipulation and massage on that area.  The vet feels it is secondary and a result of compensation because of the pain from her foot.    We have stretches to be done and I hope that helps her.   I want to set myself on fire and run screaming from shoulder issues!

My poor girl.   More health issues she does not deserve.   The vet said "a few days off", we will give it a few weeks off.    Rest, no fun, leashes - low activity to give everything a break.  I am hoping that will be the end of it, but I am not optimistic.
Posted by dogbird daily at 6:49 PM