Molly and I got to go play some more NADAC agility yesterday.   I had my day free at the last minute and I couldn't think of anything more I wanted to do than to go on an adventure with my girl to a new-to-us trial site and venue.

This time we tried a few more of the games:   Chances, a numbered agility course but with a taped off section that is a distance challenge.   Regular (Like "Standard" - but no teeter.   NADAC does not use the teeter.)  Tunnelers we of course did, and also Jumpers.   Jumpers was as named: only jumps (and a tunnel.)

I had a very interesting experience with Molly yesterday.   The trial was held outdoors but the ring did not have snow fencing, and that was a relief.   It was held on the grounds of an animal rescue, so about a tenth of a mile away was the shelter building and dog runs.   You could not see this from the ring since it was "downhill", and you certainly could not see it from the crate area.   You could hear it though.  The crating area was absolutely lovely, in a fenced in pine grove with a double gate and so much shade that it was truly unnecessary to bring my EZ Up along.   I will know for next time.


What was interesting about my day with Molly was that we basically experienced, in a condensed form, a timeline of all of the environmentally-related behaviors that Molly and I have encountered and conquered over her five years as an agility dog.   This could get a little nerdy and boring but I want to analyze everything pretty closely so I have a record of it for myself.  We got to the trial site and she was amped up immediately despite my attempts to acclimate her slowly.   What works for her usually, even at trial sites that get her the most cranked up ("Dream Park") was rolling off of her without notice.    The only thing I can think of is that I could have done more short acclimation walks and returned her to the car rather than the x-pen in my crating area, but I was parked on a rather busy street and keeping the car unlocked and open was not an ideal option (to put it mildly.)

As it was, we were acclimating and returning to the x-pen, and that was not a retreat for her to soak the information about our acclimation walk.   It was not relaxing.   She was inconsolable in the x-pen, screeching, and all around making me want to rip her lips off!   I should have brought her crate.   It is more familiar in the trial setting than the x-pen, though she has been in the pen many times before (Like, oh.   All last weekend during our camping trip!)   I specifically chose a spot away from the other crates and tents, against the fencing, but it was not enough.

We ran Chances first.   We did well walking up to the ring and even ring side for a little bit.   Molly was doing tricks and taking food (I had switched to very high value food).   About two or three dogs before our turn to go in, I didn't have a dog.   It was like a switch flipped, with no discernible trigger other than likely stress build up.  Displacement sniffing, did not want food.   This is the area that is still confusing for me.   Should I have gotten her away from there, gotten her back under threshold and scratched our run?   Historically, Molly improves a lot after she gets into the ring and has her famous lip-flying, teeth bared zoomies.   I had actually entered Chances specifically for that reason, that Molly often "needs" a run to just blow off stress.  And that was exactly what she did (Because yes.  Of course I went into the ring anyway).   She did the first two obstacles but then took a wrong course tunnel and did some circles - if I could have had a photo of her face as she ran into that tunnel!   Eye whites and teeth and lips flying!   She came back and humored me taking two jumps as directed but then disconnected again and went to the ring crew and then to the side of the ring for some intense stress displacement sniffing.   I called her name cheerily and asked her to do the last hoop, put her leash on and rewarded her back at the x-pen.   I knew she was blowing off steam and frustration because she was overwhelmed, and I knew she was stressed out after relieving that pressure because she really does try to be a Good Dog and five years of team work has told her that I don't particularly care for it when she races about and ignores me.

Molly was still very amped up back at the x-pen.   I could not leave her without her screaming.   I decided to take her and Perri for a walk through the woods across the street - there was a nature preserve with some geocaches so I decided to walk out to one of them.   I thought that if Molly had some decompression time in the woods to sniff it would help her. 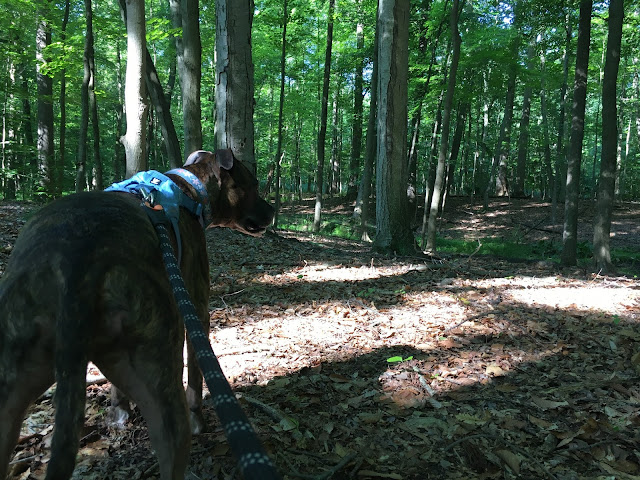 When we returned, Elite Regular was just starting.   I wanted to help out with ring crew but Molly was still screaming if I left the crating area.   I felt frustration of my own start to creep in, because I was trying my best and using all of the tools that Molly has taught me and I was still failing.   I sat down in my chair and just waited.   Molly settled down, fell asleep next to her fan, and I was able to walk away and work the Open class when it came time.   That was that.   And that was the end of it for the day.   She just needed me to sit there and be calm with her for a few minutes and let everything get caught up.

When it was our turn for Regular I picked a spot in the shade under an EZ Up and worked hard with tricks and praise to keep Molly's focus, which she was now offering quite happily.   She held a start line stay.   I did a lead out pivot and I was late with it so she ran around the Aframe I wanted her on and went into a wrong course tunnel instead.   I just wrapped her up onto the Frame and went about our business.   She got stuck with the ring crew, another classic displacement behavior of her's.   That was another timeline moment for us, it used to be an enormous problem!   I got her to re-engage and take the next four obstacles and then, she had to take a jump and turn onto the dog walk.   She took the jump and started towards the ring crew in the chair on that side of the ring.    And then, the most beautiful thing, without my calling her I saw her change direction mid stride and come up that dog walk with me instead.    I was so proud of her and grateful to her.   (Sometimes the human needs the dog to show them "Hey, you have helped me get somewhere after all these years!   And now that my brain can think a bit straighter, I can use what we learned together!)

After the dog walk was jump to weaves, and she ran past them.   I had to think in a split second what to do, what was the right decision?   Let her run past them and end on a good note?   Or ask her to do her most stressful obstacle, after we had just enjoyed a nice success.   We had already NQd so there was no pressure from that.    I chose to ask her to do her weaves.   I stayed up straight, called her into me, let my body language stay loose and playful as I do with Perri.   I asked her "do you see it?" as we learned in our online weave class.   We just had a little conversation together.   She did see them.   She ran right at them and hopped through them fast and happy!   It was a risky choice but it turned out well and I am grateful for that, too!

The rest of the day evened out into what I am used to from Molly.   We came through on the other side.   We had a long break because I did not entered Touch N Go and I certainly did not enter Weavers.   A friend dropped by and we chatted most of that time away, I ate lunch, and then it was time for Tunnelers!   There were zero issues here with engagement and direction following, Molly was thrilled with Tunnelers and we qualified at 5.87YPS and I believe the second fastest dog of all levels.   She unfortunately ripped one end of a tunnel right out of the sand bags and that had to be fixed.   Proud moment!   (I'm sure it took a preliminary beating from some of the Elite dogs.)

Jumpers was last and Molly was as calm as could be while still moving at a nice speed for another Q.   How "boring" are the nice runs, no big long winded paragraphs for me to discuss! 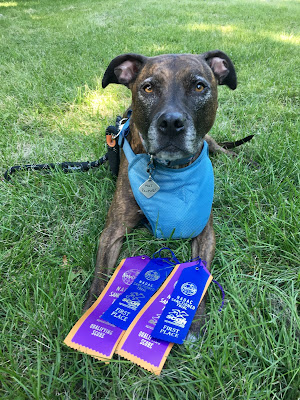 Oh my Molly.   You are not done making me work hard, I guess!   The fire still burns bright inside of this girl!   Next weekend we will return to one of our regular trial sites and perhaps Molly will be back to Miss Consistent....for a little while.
Posted by dogbird daily at 6:13 AM