Molly had her first try at USDAA Gamblers today!    I was happy to see a tunnel-tastic gamble and had pretty high hopes of getting a Q on our first try at Masters/P3 Gamblers.   And we did!   Molly was very engaged and focused and we had fun in the opening running around racking up points with no bobbling.   When the buzzer sounded she did the first two obstacles with no effort.   I tried to flip her back to the other tunnel with my outside arm but she recalled towards me a little bit.   It didn't take much of an "out tunnel!" to convince her to race towards the second tunnel and then it was just a matter of running to the exit and she went over the finish jump.   Yay! 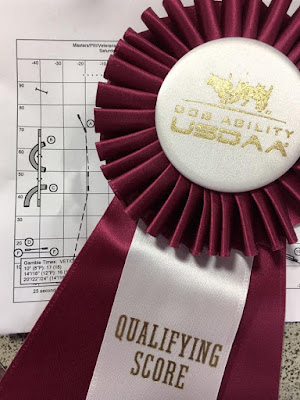 We did Standard next and while I am a little more relaxed, I am still doing silly micromanagey stuff because I'm a bit nervous.   Silly!   I don't give her enough room and I get right in her line for the threadle (because I did not want to trust her to take 2, I wanted to be closer to it to make sure she took it.)  I front crossed at the end of the teeter which I did not want to do at all and who knows why I did it.   I had wanted to wrap her around to the left of 5.   I do remember catching myself from running all the way to the 7-Tunnel.   Our weaves were going good and then for some naughty reason she pops out!   She was weaving really nicely.   Naughty!    At that point I got a little more nervous and start doing more bending down to handle her and not being confident.   Naughty A-frame too, we haven't had one of those in a while.   Oh well!   I call it an improvement from the last time though in the "mental game" department for me!

Short day for Molly, she was all done.   After almost 2 months off of agility trials, I entered Perri in P2 Pairs since our friends Donna and Sly moved up into P2 and would need a Pairs Q.   Perri also does not have one so, mutually beneficial!   I knew it would be a short course, Perri would be happy to have some of her best friends in the ring with her, and I thought it would be a good barometer of where Perri is at.


Because we did Pairs, I had to pay a lot of attention to where the baton was!   I even walked the course with the baton with careful thought to where I would position it at all times.  I kept my outside arm locked at my side with the baton (I got the shortest one available) against my leg.   It kind of meant no side changes - which resulted in some confusion and therefore demotivation after number 4.   Oh well.   I'm trying not to overthink it.  The last line was nice and straight and Perri picked up some speed.   I even remembered to put the baton down before celebrating with Perri at the end.

Perri is back on trial hiatus for sure at this point. 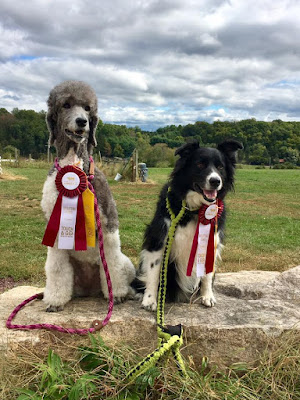 We ended the day with a lovely hours-long walk at the local lake park in the heavenly 60s degree windy weather. 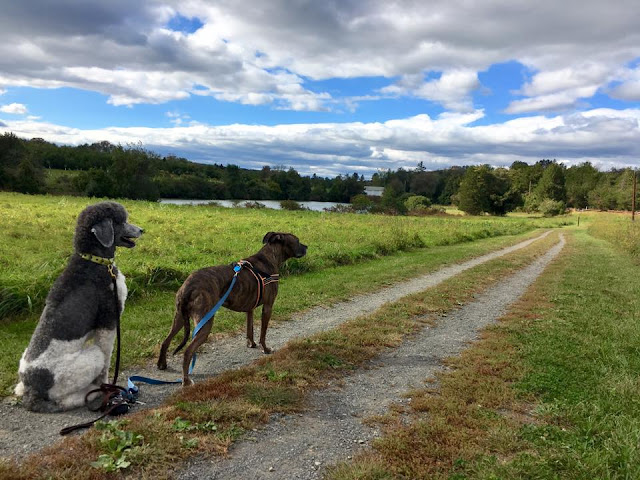