A close friend of mine often laughs at me because I tend to make declarations...only to change my mind later.   I did exactly that regarding yesterday's trial.   "I believe I need to be firm that Perri does not run here (on dirt.) anymore."    Also, Perri is on an agility break, right?   But what am I to do when my best Molly hurts her foot and I've got five perfectly good runs and and and....I swapped Perri in!

I am bad.  bad.  bad.   But I was resolute to scratch and quit playing if things went badly, resolute to keep running and not fix "errors" (of the "spacing out and trotting past an obstacle for stress reasons"-variety)  Most importantly, I felt enthusiastic about a chance (however naughty on my part) to play with Perri.   Not out of duty, not out of "fixing my project", just excitement over the opportunity.


Our first run of the day on dirt footing is normally zooming and barking and silliness.   It was...not!   The course was very short, it was the game called Colors.   There are two mini courses on the map and you pick which you would like to run with your dog.   I chose the shorter one, only eight obstacles.   The downside of that course was that the weaves were very close to "ring side" but I wasn't insisting on weaving today.   Firm.   Perri was a thing of beauty, running fast as the wind and the course was blessedly a course which allowed for extension - perfect.   Perri even hit her weave entry and weaved straight through and took the finish jump.   16-something seconds!   5.44YPS!  Perri!

We played Snooker next and I hated the course, but I do often call Perri the "Snooker Queen".   Perri never NQs Snooker anymore, in CPE or USDAA, even all through this year and her issues that we have been struggling with.   She is "further along" in Snooker in both venues than any other game.   And she was the Snooker Queen, doing my goofy choppy plan that I hated with happiness and speed!   The weave poles were "Number 7" and she did skip out of them after three but I was a very good poodle support handler and did not miss a beat, just kept running and asked her to get on the table.

Jackpot was next and Perri started to fray.   Off the start line she took a jump and had a moment where she spaced out and slow-trotted in a direction I was not running.  Thank goodness this happened in Jackpot, a class where I am most at ease.   It set me up for success.   I changed course immediately and made a big noisy cheering fuss and took off in the direction that Perri was moving.   It worked.   She sort of rebooted and then started running with me again and enjoying herself!   Good!   The Jackpot was "non traditional" so the rules were: you had to collect points and after the buzzer, any tunnel that you did meant that the obstacle following that tunnel would triple in points.   I asked Perri for a tunnel, then the Aframe (tripling it to 15 points.) and then did two more tunnels on our way out (tripling the second tunnel to 9 points.)   Cool! 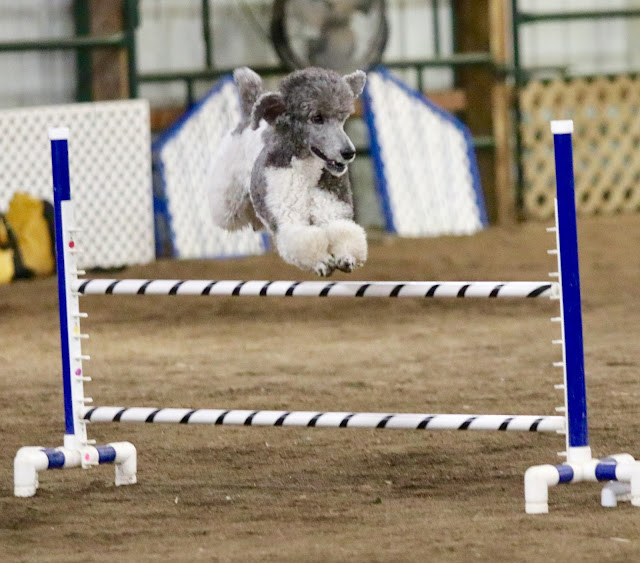 I lost Perri on the fourth run, Standard.   She was slow off the start line and had a moment of stopping.   I stopped with her and made the claw hands and scuffed some dirt sideways, and that energized her into a pounce!   It was short lived as she came out of the next tunnel in a daze and trotted past the next jump.   I switched course and just ran past her to a panel jump and asked her for the dogwalk (her favorite obstacle).   She did that, then the teeter but was very sticky on it.   The weaves and a tunnel were the last two obstacles and she said "no thank you".   After she ran past the weaves we just went straight to the leash.   The whole while I was running with her and did not stop and compound her stress.    We had one more round of Standard left to go, but I scratched that.

It was a good day overall.   Success and good moments, and a reminder of Perri's limitations.   I respect it all.   I am proud of myself for scratching her last run, but I wish I had listened to Perri's behavior in Jackpot and scratched the first round of Standard as well.   I am a work in progress too!  One other thing that I did differently was to keep Perri outside on the car as much as possible, and then keep her back away from the ringside area as long as possible before our runs.   Will continue to experiment with this.

And of course I must mention my most perfect Mr. Ein!   He played in Colors and in Snooker with Qs in each game!   He is running faster and faster and staying committed to obstacles better, such a fun boy!   In Snooker we had to do a rather obnoxious plan so that we could earn enough points to still qualify without doing the Aframe, which was number 5 in the closing.   Since Ein is in Level 1 Specialist, he only needed 24 points.   We earned 21 with our opening alone and did obstacles 2-4 in the closing.

I am having so much fun playing agility with Ein.   As of yesterday's scores he is over halfway towards his 1000 point Level 1 title.  We sure are having a lot of fun together!   I daresay he is beginning to love this game more than Rally or Obedience! 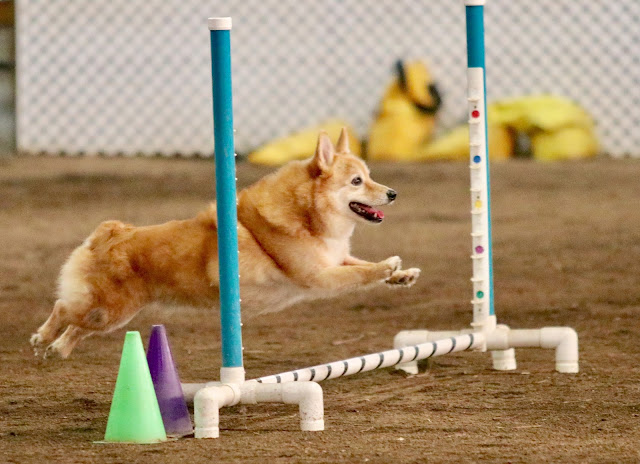 Posted by dogbird daily at 7:47 AM