This past weekend we finally got to have a try at a Performance Scent Dogs nosework trial. We of course have not trialed in Nosework since our NW1 attempt in the spring, and it was our first time entering a PSD trial. 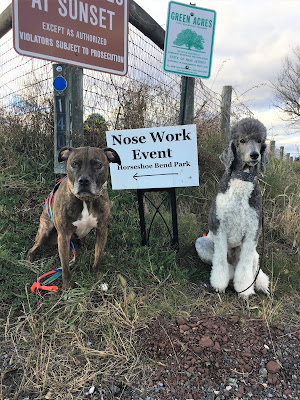 Since I have been training Molly on birch, with very enthusiastic results, I decided to enter her in a "Target Odor Test" for Birch. In the Target Odor Test, or 'TOT', the dog searches 12 identical chairs for odor. Only one chair has odor. A dog be entered in their TOT as well as other classes all on the same day. If the dog does not pass the TOT, they are still permitted to search in their entered classes on the same day, but they will be searching "For Exhibit Only" (FEO) and the scores would not count towards titles. Pretty cool!

Knowing that, I entered Molly in Buildings (indoor search.) and Containers. She is trained on both of those elements and I wanted a chance to get her "out there" and see how she looked! I love that I could enter just an element or two, even on a dog who has not done their odor test yet. I was not sure how Molly would behave! We are still getting past some issues of not driving directly into the search. Molly has an issue with looking to me for direction and getting pushy and heading into overarousal when I fail to tell her what to do. I expect this issue to fade away rather quickly as we do more and more training. Molly has been an agility dog for five years, I feel this is a symptom of transitioning to the independence of scent work.

Molly's TOT went rather well! She visits source more than a few times but doesn't particularly alert on it, she does some watching me and looking to me for direction. After observing her behavior one one particular chair I felt confident to call alert on that chair. Pass!


Molly was next up in the run order for her Buildings search! More of the same behavior of looking at me and acting like she isn't quite sure why we were there. It clicks into place before long and she got super interested in the mop bucket sitting against the wall. She finally does a little pawing alert, which I was happy to see from her! I'm kind of proud she worked out this scent puzzle, as she was working inside of the bucket initially but then went down underneath by the wheel where source was. She has never seen anything like that. Has never done an Interior search away from home (I said she was super green after all!)

Molly needs a lot more generalization and practice, but I was overall super happy with her ability to work in a trial atmosphere. She got a "Great Enthusiasm!" comment from the judge.

Perri got to go next in the Distance Element. She got to do a container search, with blue lines taped on the ground that I was not to cross. At the Novice level the distance was not too great. I have been working both girls on "funny" non-box containers so Perri approached the little Thanksgiving-themed pilgrims and pumpkins like it was just another search. This was probably the fastest Perri has ever worked away from home, 22 seconds even with a weird little poodle detour to sniff the black post that marked the start line. And in the ribbons with a fourth place!

We took a break for pinning the mornings ribbons, lunch and then some classes that I did not have the girls entered in. I chose to avoid Exteriors for this trial for Perri, and Molly has not started Exterior work yet. I love that I could choose how much or how little elements I want to play! We also took a short hike at the neighboring hiking trails during that time with our friends Mary and Zoe. I could not resist a funny photo of Molly between the two poodles! 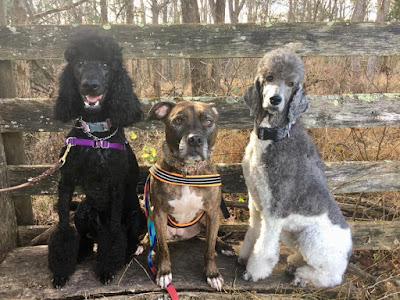 After that was Perri's turn for Buildings. Another thing I really love about this venue is that they offered "split" Novice classes so that a handler can run two dogs in the same day. For each Novice game offered, there were two groups of Novice dogs running through. Molly's Novice A group had gone first, and the Novice B group went later for Buildings.

This search was my proudest of the day. The building was very very large, so two search areas could be judged at one time. You can see the divider in the back of our area. The dog working adjacent to us was very vocal, the building was echoey. The hide was in the support of the table and Perri went in through metal chairs and the metal support of the table to get to it. She does not alert or stick to source as she normally would, but her behavior told me she was in odor and likely at source. I asked her to check the area again and called alert when I saw her freeze at source momentarily. I had to repeat my "Alert!" call to the judge as the other dog was so loud! I am so proud of Perri for continuing to work through a loud dog in the same building and pushing around metal to search. Good girl! This search was also a third place!

I thought we were golden for a perfect pass rate for the day, since we had only Containers to go. Perri's favorite element is containers, and Molly is doing well there too. And then...I walked into the search area. They were hanging containers. They were little plastic pilgrim hats hanging from a line. Uh-oh. I knew PSD uses hanging containers but I did not train for it. I didn't expect to see that at the Novice level, though I am certain the rule book covered that subject and I overlooked it. I do love the idea of it though, it is different and fun! In Molly's defense she gives it a pretty good try! And I think if I had not been so surprised by the hanging containers and then subsequently by Molly pulling the line down we could have passed. I should have taken a moment, gotten us both away from the search area, gave Molly a treat and then restarted. Watching my video I do see towards the end she smells the hot container and then turns to me. It just wasn't clear enough to me, I don't regret not calling alert on that one. It was all really not that bad for a dog as green as Molly, and the double leap over the clothesline was too funny!

I knew that Perri would be afraid of the hanging containers. Whether it would be mild reluctance or outright NOPE! I wasn't sure of. I have a video of the search but it isn't much. She approaches the first hat tentatively, gives it a nose touch and recoils in terror when it moves. When I ask her to walk in a circle around the line she speeds into a pretty trot, obviously relieved I am getting her away from that offending object. She would not search and I ended it. I was not going to beg and plead and upset her for the remainder of our time in the search area. It needs a lot of work but I wasn't going to progress by asking her to search over and over again. The judge was extremely supportive, and told me she has a dog like Perri. She asked me to turn Perri away from the containers so that she could turn the hat upside down with source pointing out towards Perri and being held very still. I loved that she understood that. Perri was worried to approach at first but then she surprised me by sticking her nose forward, so lots and lots of food! The judge told me that it means more to her than I will ever know that I ended the search for Perri and supported her. I saw on our score sheet that she wrote, "Love how you treated your dog."

So while our container search was a Fail, the judge's kindness and support meant a lot to me. I came to this venue after finding NACSW to be too intense for Perri, especially one particular judge. We ended our day with an issue caused by Perri's sensitivity and limitations but this time we found compassion and understanding from the judge instead of criticism. I feel great about our decision to proceed in this venue. And it is fun!

Now remember, I don't like Nosework! Nope! Not at all! But...I can't wait for our next trial!
Posted by dogbird daily at 12:04 PM