There is a camp of thinking that tug is the end all be all when it comes to agility. Molly has always been a food motivated and ball throw kind of girl and we do all right. Molly loves tug and can play a quite savage game of it, but I would not say it is her highest motivator. I always just think, whatever works for the dog. But after a long chat with somebody at my club's agility trial in December, a chat which included her reverence for tug, I decided to put priority on Perri and tug.

In the conversation I poo-poo'd the idea, there is no way tug could be a motivator for Perri. And there probably isn't still. Perri is a very "my way or the highway" dog. And right now her way is a "not much of anything" way. When it comes to tug Perri has always been polite. So polite.

But right now we are on an agility hiatus. Theoretically until March. Or April. At which time I will try Intro USDAA with a toy and see what happens. Our toy of choice is a squeaky tennis ball or her beloved duckie. You aren't allowed to have squeakies in the ring but Perri doesn't squeak those toys, she just pounces around them and acts like a lunatic. It's adorable. It is also an activity that does not involve me at all. So, I got to thinking. What do I have to lose? Maybe I could build Perri's tug drive and it would help us mend what is broken between us.

I started last night. And I feel I have already progressed beyond what I have done in the past. Perri was playing with a destuffed and desqueakered T-rex toy (thanks, Molly.) and I decided to try to play tug with her. I have always given the lightest tension with tug with Perri. She won't tug hard, it is as though she is thinking, "Oh I'm sorry, if you want it that much you can have the toy. Pardon me." But last night I realized that Perri wanted the toy to herself. So, as soon as she tugged against me, I released the toy to her and rewarded her with what she wanted. We played around a little and I slowly got more particular, only releasing the tug to her when she gave a lot of effort, a hard tug. (for her.)

Now tonight came around and I was surprised by how much more into the game Perri was. This time I initiated the game entirely. We used another "stripped down" rabbit toy (again, thanks to Molly.) I threw it on the ground casually and she grabbed it up and retreated with it. A surprise to me since lately, she hasn't been too terribly interested in toys - I blame the Fluoxetine for this.

I went after her and retrieved the toy with interesting results. Perri is more insistent on tugging against me on the second night. She is giving harder tugs. And I am rewarding this with letting go of the toy. But tonight, instead of last night, she isn't taking the toy off on her own. She is offering it to me again! She stands there with it, and moves forward ever so slightly. As though asking me to play with her. And we did! It went on for a while.

Where will it go? Who knows! I have some ring confidence plans for her in store for the remainder of the winter and I am hoping that some cooperative play will help us with that. 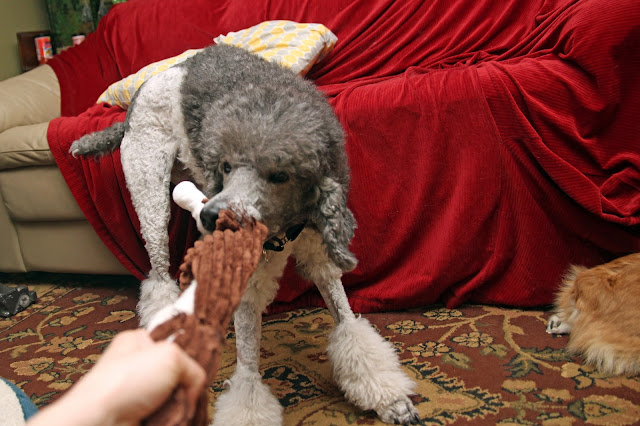 Posted by dogbird daily at 5:35 PM