Yesterday was a big day for Molly as we loaded up into the car for the 120+ mile one way trip to VOSM. I was not sure who to go to in my area for a maybe-toe-but-maybe-who-knows-what injury and so I decided that mine and Molly's journey together wouldn't be complete without her one and only injury being diagnosed at the famous and incredible VOSM (Veterinary Orthopedic Sports Medicine.)


I was very anxious about finding out the reality and truth behind Molly's limp because it meant facing the music and making decisions. I knew the toe was an issue, but I was also very concerned about her wrist - I was specifically worried it was a hyperflexion injury. I am really good at worrying! I didn't stop there! There is always medial shoulder instability, elbow injuries and bone cancer! Lots of things to be fretting about for no good reason!

We started by reviewing Molly's old foot x-rays from June of last year. Then we went into a large room and let Molly move around freely so that the doctor could observe her (Molly had been, to my eye, moving quite evenly as of four days prior to the appointment.) There was a very thorough clinical exam. Toes, wrists, elbows, shoulders, spine. Molly was cranked into full extension and flexion, I noticed the abduction angle of her shoulders was also tested. She tolerated it all with a "where the f**** is my f**** breakfast" stink eye and as soon as it was done she visited everybody and tried to kiss them. My heart burst with pride. Molly is so tolerant and accepting of handling. I had no food to pay her with since she had to have an empty stomach in case of any test or procedure requiring sedation. She is a Good Dog. Clinical exam revealed soundness in all joints except for a grudging pain response when the doctor pressed firmly on the toe that has been troubling Molly.

Next there were diagnostic tests. Molly's had the Gait4Dog gait analysis test, "It's a pressure sensitive walkway measurement system designed to capture and objectively analyze data in minutes." I have a super nerdy fascination with this test! What exciting technology! I was shocked to hear that Molly's gait is totally normal, no off loading. My eyes were not tricking me, Molly really was moving soundly again and not favoring her left front. There were also all new x-rays. Feet, wrists, elbows and shoulders. Frontal and Lateral (side views.) The shoulders looked great, no arthritis or other issues. The elbows also looked great with some mild arthritic changes on the left side. The wrists also looked great. The foot x-rays revealed some intense arthritic changes to the left medial toe in comparison with the opposite side. There was an ultrasound of these two areas of concern (the left toe and the left elbow) and it revealed a small bone chip in the joint, remnant of an old fracture (they said at least a year old - I cannot remember a time when Molly acted as though an injury of this sort occurred but that means nothing.) The joint has been trying to heal itself. Blessedly the tendon near this joint is quite intact. They also scanned Molly's elbow and it showed some mild thickening of the biceps tendon, which they feel is secondary to altering her gait to compensate for pain in the toe. 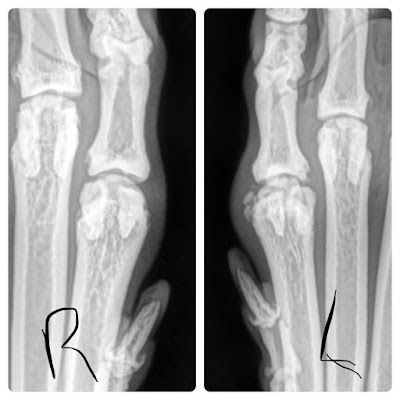 Molly was sedated and given steroid injections in both her elbow and toe. The doctor actually was able to drain fluid build up from the painful toe joint. That alone should give her relief, doubly so from the steroid injection. She was released a few hours later! Two weeks of leash walks only. After that I am to take her hiking and start reintroducing some  uneven footing. He wants her back in a month for a follow up visit and would like me to do some very heavy activity with her before the visit. I think Molly and Mr ChuckIt Ball could make that happen. He asked what my plan is for this year's agility season. I told him I am prepared to retire Molly but I said that we both love playing the game together so it sure would be nice if we could keep doing that. He is optimistic that Molly can continue playing agility! He said at this point he is happy to do injections as Molly needs them - time will tell how much relief they give her and how often she might need them. 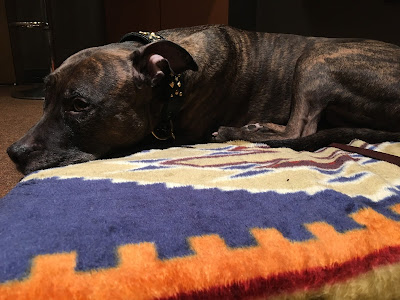 One thing I am keeping an eye on is Molly's anxiety levels. She is not normally an anxious dog aside from her thunder/gunshot phobia. She is always anxious and whiney post sedation, and she definitely was last night. I remember after Molly was taking oral prednisone a few years ago she was anxious with her hair standing on end, pacing and whining and chattering her teeth. Now we have injected a steroid into her joint. I did notice a few times since last night, her hair was on end, although all of the times I saw that I could blame cold weather for it. (It happened when bringing her inside from a potty trip outside on two different occaions.) This evening on one occasion she was whining but it turned out she needed to go outside badly to have a poop. At this point the low level anxiety behaviors I have seen are easily explained, and we are also less than 24 hours out from a very long yesterday without food, a "stressful" day of testing and manipulation and needles and nearly 6 hours on the road. If I continue to see these anxious behaviors throughout the rest of this week, and at times when they don't make sense, I will sadly have to make the decision that the steroid shots are not a good quality of life decision for Molly. Time will tell!

I feel so much relief at what we have discovered! Arthritis and old fractures suck but you cannot do much about them and there are much worse things in the orthopedic realm of possibilities. I believe that the warm weather will be easier on the arthritis in Molly's toe. I have made the decision to no longer participate in coursing activities with Molly. While I know that Molly's toe was arthritic before this past year's coursing aggravated it into lameness (browsing old photos I can see the foot deformity as far back as at least 2016 and perhaps 2015.), I think it is smart to avoid the things that triggered acute lameness. And that includes the blue mat footing for agility. If we get to return to agility, which I really feel we will!, we have to stick to turf, grass or dirt.
Posted by dogbird daily at 5:00 PM