I keep having to pinch myself and get my head out of the clouds after Sunday's AKC agility trial with Miss Perri! Entering Perri was quite honestly something I did because I wanted to go spend the day at a favorite trial site with good friends of ours. Entering the Excellent level is completely out of the question for Perri, but fortunately you are allowed to start at Novice again if you drop your dog to Preferred. I made that decision last year, but have done exactly one AKC trial with Perri since then, and she only qualified in FAST. Regular titling classes still in play for a drop to Novice.

And Novice would be perfect. Simpler courses for us would allow me to work hard at staying connected with Perri and putting into play the changes that I need to make about myself for Perri's sake. And bonus: since we were playing AKC, she could wear a collar and eliminate all of the issues that come with equipment being put on and off of her body. Regardless, I was terrified. Perri used to absolutely adore this trial site. But last year she was incapable of doing more than a few obstacles the last time we were there, and she was obsessed with worry about a door in the back of one of the rings. 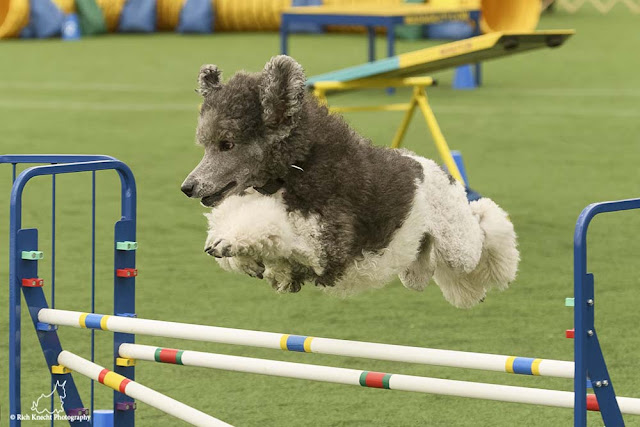 We arrived bright and early for JWW, oh the joys of Novice! We were in the "ring with the evil door", but thankfully it was early morning and there was no harsh sunlight coming in (that was the trigger the last time.) It was not long after arrival that I was walking the course and then taking Perri into the ring. I chose to do a start line stay. I focused so hard on maintaining connection, being cheerful. And we did a really really awesome job, Perri was absolutely flying and I was handling her nicely! And then we had an oops. I didn't realize until I watched my video what exactly happened. Perri has a delicate throat and if she is stressed she will either have a sneezing fit or a coughing fit. During our run I pushed a little too hard on her line and she ran for a wrong course tunnel. I called her with an upbeat tone but she knew it wasn't right and started coughing ("hackerdoodling", we call it!). And of course the weaves were the next obstacle. I decided to just forget about it and let her run out the last three jumps, a nice straight line, and she took the first one but blew past the last two. Residual stress.

I felt disappointed in my behavior and my mistake. I did feel better when I saw the video, because there was a clear cause for her behavior and a way for me to improve so that she doesn't feel this way again. I thought that the weave poles had triggered the coughing, but it was actually the error of running for the tunnel. (my fault!) Regardless, we had a phenomenal time on most of the course and I did not expect perfection!

And then it was the loooooooong wait until the end of the day for Novice Standard. Oh the joys of Novice! I was hoping that we would not have an enthusiasm crash for the second run of the day, that is a thing that could happen. The opening of the course was a two straight jump with a sharp 90 degree turn. There were lots of curvy lines of jumps. As much as the JWW course was a Perri-friendly course, the Standard one was not a confidence builder. I chose to lead out just a little bit and then tried a front cross in front of jump #2. I was not miserably late with the front cross but I could have been clearer, and Perri ran right behind me, took a wrong course jump, and headed towards the A-frame. I did not even say a word but when I turned to her, she was frozen. She looked at the Aframe and then started looking around the ring and looking at me. A staring fit. My worst effing nightmare. I tried to do the claw hands and jazz her out of it. No. Then I did another new thing I have been trying in class. Our instructor told me when she shuts down I should ask her for a nose touch or a trick, something quick and easy to make her feel successful and re-engage her with me. I've actually been doing a down and have had a lot of success with that. I've even been working downs into the start line. It's rather strange because downs used to be very unnerving for Perri, but I don't question it! I think somewhere in our fold back down nerd training and the table down value building, she has begun to enjoy the position.

I got down on the ground, real quick and talked silly talk with her and asked her to down. She bowed, she wagged her tail and she dropped and just looked into my eyes and I ran away from her and asked her to come with me. For a half second she just lay there and I thought, "Well. That's that!" But then she absolutely exploded up and did the next three jumps! (And promptly skipped the tire and the weaves but we just kept running!) Then it was the pause table and well you bet I asked her for a down again! She was flying high after that, running as fast as she is capable of, blowing her contacts and finished the whole course over a curved line finish. Whoah!! I was floored by her! It was a royal NQ (Just take note in the video of the judge signalling mad faults!) but we don't care, it was so much fun!!!!!!

I am over the moon with this girl and I'm just gonna brag that I am proud of me. I went into this year feeling absolutely powerless on how to reach Perri, feeling like it was all over. I got over feeling jaded about agility classes and found an instructor that saw exactly where I was failing Perri. I am forever grateful. If there was a single thing in my power to help this dog, I would crash into it and attack it. And I did. We did. I am so afraid of everything crashing down again on us, afraid of making too many handling mistakes and setting her back. I keep thinking "but she won't weave but she blows her contacts but but but but"...but I think everything is going to fall right into place when our confidence soars back where it belongs.

Posted by dogbird daily at 6:30 PM

Email ThisBlogThis!Share to TwitterShare to FacebookShare to Pinterest
Labels: agility, akc agility, it's all about the journey, perri, trials