I am loving all of the opportunities we are getting to play nosework with Performance Scent Dogs! We did a repeat of last month's trial: Molly in Buildings only (no container potential.) and Perri in Buildings, Speed, Distance and Containers.

Molly's Novice group ran first for her Building search, and since I volunteered to steward the ring, we got to be the first dog in our group to go. Molly made pretty quick work of it! She sources within seconds but doesn't stick, though she quickly returns to the hide and insists a bit better. I'm proud of her keeping her brain and launching into the search right off the start line. No antics, no staring at me and way better obedience to odor. Good Moo!


When it was Perri's group's turn, the first search area was divided into the Container search first and then the Distance search to follow. Containers was a bunch of St Patrick's Day themed leprechaun hats on the ground. Perri had a moment of being lost in hypervigilance at the start line and I gave her a few seconds and interrupted her and asked if she was "ready?". I always let Perri make the choice to re-engage with me but we were at a trial. Her behavior did not surprise me as she has had beyond-her-normal stress issues at this trial site in the past - that was for agility trials, I was unsure how she would feel if it was nosework. She responded very well to my gentle reminder and went off the start line quite happily and indicated on a container within 12 seconds. Very good for Perri! And then she actually pulled me to the start line for Distance after that. Great!

Distance was nearly the same situation as we saw last month. Some containers on the ground and some hanging off the wall. Perri sourced pretty quickly on a paper lantern hanging on the wall but would not indicate. I felt pretty certain that she was at source based on her body language, but Perri is very meticulous in her inspection of containers and I could not be sure that she wasn't giving the odd hanging lantern some extra attention. Perri left the lantern and followed the wall to the ground and out of the search area, but then quickly doubled back and nosed around a container on the ground. Hmmmm. Not this time Perri. I knew she was conflicted. The hot container was hanging but she has a stronger reward history for ground containers and also she does not care for hanging containers. I waited her out and she left the ground container and gave a lot more attention to the hanging lantern and this time I called Alert and we got it!

Perri got a short break of about 15 minutes before we returned to do our other two runs. We started with Buildings. It was an area with a table some other furniture/objects that I can't remember. Perri spent some time at the bottom of an I-Beam support on the wall. She did one more sweep of the search area and then indicated at the base of the I-Beam. Perri earned her first nose work title with this search, Novice Buildings (SD-NB)!

We went straight to Speed after that. Perri was not as confident as she was last month. She searched all of the sets of boxes and did not indicate, but was happy to do so on the second pass. The judge wrote "You are so patient" on our score sheet. Ha ha ha! She also gave me some pointers for helping Perri's confidence to indicate as soon as she gets to source instead of just "cataloging" where the hide is and telling me later. Perri Q'd in Speed though, with one second and some change to spare. Whew!

Perri also earned PSD's Iron Nose award, awarded to teams who are entered in and qualify in every class of the day. Wow! It was an honor to get that with Perri. And of course, she had to be posed with some perfectly foolish decorations from the St Patrick's Day themed trial to celebrate! 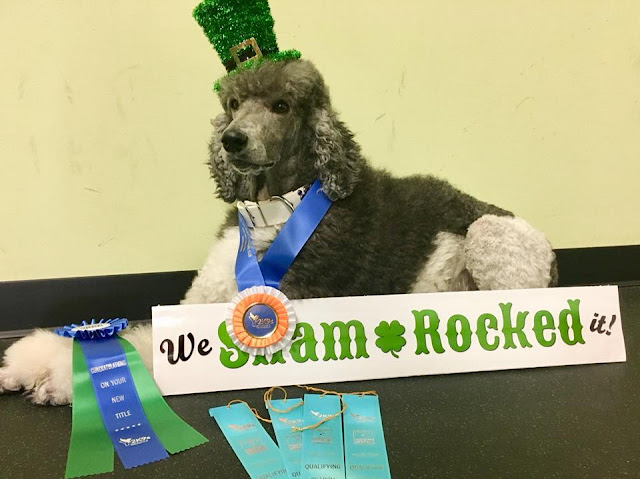 Posted by dogbird daily at 5:36 PM