I'm a little mad at myself for not updating more often about Zorro!

Crate / Ex Pen Manners
This has been going well with marked progress! We have a system for the work day - Zorro gets his breakfast from the Treat n Train as well as a Kong and a teething chew. I use a wifi app called Presence so that I can watch his behavior while I am at work. It is good to see what happens when I am not there. Initially Zorro would finish the Kong and chewie and then scream and scream at the ex pen door. Major barrier frustration. He would nap and then wake back up and scream, in a loop.
I initially set the Treat and Train to dispense every 25 seconds. We have now worked up to 45 second increments. Over time Zorro definitely loves his ex pen and worships the Treat and Train. It actually seems to have a relaxing effect on him. He is to the point where he finishes his chewie and then curls up next to the treat and train and will doze next to it, enjoying waiting for his breakfast. He sleeps well in his ex pen now. I am planning to increase to 60 seconds between dispensing soon.

Car crate manners are excellent. Zorro has come to Molly's agility class each week, various trials and events and has tolerated car crating well.
He sleeps in a crate next to my bed at night. He often will do some whining for about five minutes before falling asleep at night. It annoys me but I am grateful it is not outright screaming. When Z first came home I did a lot of putting my fingers into the crate and he would frantically rub and smash his body against my fingers, snuggling into the contact. Then he would fall asleep! All in all, no complaints about the crate at night. Housetraining
Zorro came to me litter box trained and during his first week he would seek out his litter pan if he had to go and I did not get him outside quickly enough. That nice little habit vanished quickly enough. He still uses his litter box when he is confined to the ex pen during the work day. (We went through a day or so where he would pee on the little crate pad I left in there with him, so that was taken away for a while.)
I am a very vigilant housetrainer, if not obsessive. We have had a few accidents, but I would say 95% of potties are happening outdoors. Family Life
Molly continues to ignore Zorro although she will now take time out of her busy day to scold him for biting at her. Ein gives corrections where they are needed and overall ignores Zorro. No interest in playing. Perri has taken the role of Big Sister by storm. She plays chase and bitey face wrestling with Zorro and pays him attention while on our hiking field trips. It makes my heart so big to see Perri have such an important role in Zorro's life and a "job". Hiking
I started off by taking Zorro out with Perri (with or without Ein) to our favorite tiny local park. There is a wooded area and we would go for little five minute hikes. Over the past few weeks we have expanded up to 15 minute hikes. Lots of recalls with the leash dragging the whole time. This past weekend I took Zorro and Perri for one hour hikes two days in a row. It has been a long time since I've had a puppy as young as Zorro (Molly was my last.) but I think it is so beneficial for puppies to learn how to use their bodies by running through natural areas. Jump over logs, navigate terrain, splash through puddles and mud and creeks and lakes. Crucial. Hiking is an enormous part of my life, it is Perri's strongest area. At 13 weeks old this weekend Zorro finally made the switch from water is a heckin concern to water is fun! He willingly swimming out after Perri as she swims for her ball. I am walking out with him. Very exciting stuff! Grooming
Zorro does not like baths and he goes berserk when I attempt nail trims. For now we are working on tolerating being wiped or toweled off and that is improving. He has a short smooth coat so even though he likes to roll in earthworms in the yard (Molly taught him this pleasure!), it's easy to keep him clean without baths. For nail trims I am practicing just holding him and giving him treats for calmness and stillness. I got away with trimming his nails while he was eating a Kong or licking peanut butter from the fridge a few weeks ago, but now he is onto that trick! I actually had Vince hold him and with much peanut butter for calmness and tolerance, I was able to get his nails trimmed this past weekend. Training
Zorro is super food motivated and we are having a blast training together!
I am trying to behave myself and not get too carried away, we have all the time in the world! I introduced him to the clicker very quickly. Following a treat in my hand for luring purposes. Following a thrown treat.
Crawl. Spin both directions. Sit. Fold back down. Perch work. Hand target.
One area I have put a lot of priority on training-wise is polite waiting for dinner (versus diving into the other dogs' food bowls.) I could manage this by putting him in his ex pen when I feed the other dogs but that's not where our future will be, so no reason to not start now. Zorro has a very polite sit and wait (though sometimes with some hoverbutt!) on the mat in my kitchen, and he gets a treat for each Other Dog Bowl placed on the ground. And then he gets released for his own food, whether it is in a puzzle toy, slow feed bowl or the TnT.
Zorro is in a baby agility class, which is very exciting for me. We are working on skills that I never had in Molly or Perri's foundation. Zorro's food drive is definitely stronger than his toy drive. He is happy to chase a tug toy in class in situations such as restrained recalls though!
I keep calling him a Dream. He is so motivated, uncomplicated, happy and smart. We are having so much fun together. 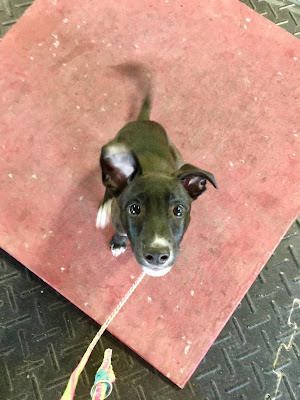 Posted by dogbird daily at 6:22 PM