While we sure did give fluoxetine it's fair shake, I ultimately decided to discontinue the medication with Perri. Perri had a lot of good results on fluoxetine, though I would not say she ever totally overcame her hypervigilance issues on the drug. Her stress drinking stopped, her fear reactivity towards other dogs diminished and her hypervigilance did decrease. However, the drug made Perri rather dull and she lost her playfulness almost completely. That was upsetting to me and so we made the decision to half her dose.

Initially the half dose was promising. Perri's playful personality seemed to return while she maintained the positive effects of fluoxetine. In time however, the 10mg dose seemed to be doing absolutely nothing for Perri. We were back to some mornings refusing to pee because she needed to stare aimlessly into space, increased explosive fear reactivity episodes towards other dogs, irritating alert barking and even a few episodes of bed wetting (this is due to stress drinking at night to the point where her bladder is so full it cannot hold anymore and she leaks.) At working dose, I could not tolerate the personality change. At half dose, it was not helping her.

Instead of taking Perri in to her behaviorist for a visit, we did a phone consult. Perri had just been in for a visit and bloodwork check (all normal values!), at at that time we decided to half the fluoxetine. This time we discussed some different options. We could try a different medication in the SSRI family (which is what fluoxetine is, an SSRI.) We could keep her on the 10mg dose of fluoxetine and try a medication form a different class. Or we could try a medication from a different drug class. In our case we chose to try amitriptyline, a "TCA" tricyclic antidepressant.

The plan was one week of every other day fluoxetine. Then one week of nothing. Then start the amitriptyline at half of a 25 mg pill twice daily. Then increase to 25 mg after 5 days. She would like us to try 50mg twice a day but given how sensitive Perri is, we are not sure how she will tolerate that. We may add the 10mg dose of fluoxetine back in at a later date. I wanted to take her off of fluoxetine entirely so that I could observe the effect of amitriptyline alone first without wondering which drug was helping which behavior. 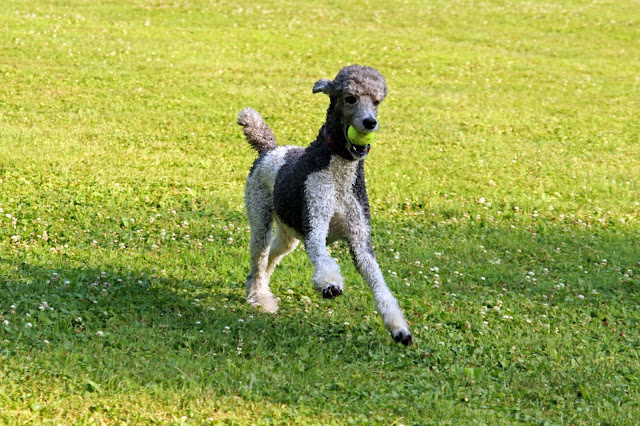 Posted by dogbird daily at 4:52 PM