We ended our trialing year of 2018 in a big way, with three days of trials!

Friday night was Einey with two CPE runs: Fullhouse and Snooker! Fullhouse was lovely and in Snooker the Aframe was #5 in the closing so I had to make a plan with big points in the opening so that Ein could still qualify with only making it through four in the closing. Ein says NO to the Aframe these days. We made it happen and Ein ends the year standing at 905 points, getting pretty close to that 1000 point title, buddy! (I am still semi tempted to enter a CPE trial the last weekend of the year so maybe I will make a liar out of my post title.)

I am beyond blessed to have a nearly 14 year old dog still playing agility. What a boy! 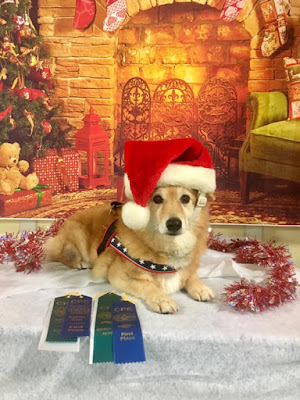 Saturday was our agility club's USDAA trial weekend and we had a Masters only trial on Saturday. I had a family get together planned for the afternoon on Saturday, but I still took Molly to the trial for the first two runs! We played Gamblers and almost got the Gamble but not quite. Standard was a real heart breaker, with one bar down and no other faults. Ouch! I did not post about it but a few weekend's ago Molly earned a second P3 Standard Q so she is now just one away from her MAD (P) title. Hey, we earned two Standard Qs for 2018. Not too bad!

What a year for Molly! Her front feet gave her such trouble, the toe injury and the ripping-off-the-entire-toenail ordeal directly to follow! But Unsinkable Molly rose from the ashes and we have been able to play agility together consistently since the late Spring. I have so treasured this year of training with her, actually even more than trialing. I wanted so much to have a year of really excellent training with my best girl and I got it. Every week she has been physically able to, Molly has been in the ring with me, helping me learn and putting up with my short comings and making me a better handler. Molly is my first agility dog and I always feel such guilt for failing her and not making good decisions for her in the beginning but it is a true treasure to still have her ready and willing, to still have a dog who is able to learn with me.

And Sunday brought Perri's turn since it was a Starters/Advanced only trial that day. Since it was our club's trial I entered Perri in all four classes offered.
We started the day off with a bang by earning Perri's P2 Snooker title! We did "three 4s" and she really opened up in the closing and got all the way through 7. I was thanking the agility gods the weaves were not in the course!
Jumpers was next and while I was very careful with Perri ringside (I kept her at our crating area the entire time.), as we were entering the ring a small dog snarked at Perri's nose just as we were heading for the ring gate. Perri entered the ring with her tail tuck and froze on the start line and would not release on the first cue. She was a bit slow off the start line and through the first tunnel but then she opened it up and we earned her second P2 Jumpers Q and were 13 seconds under standard course time. Perri!! The whole time I was laser focused on staying connected to Perri and not falling into my old habits of looking at obstacles instead of my dog.
There was a very long break after that as we ran Starter Jumpers as well as two Intro classes. Gamblers was next, not Perri's strong area to work away from me. I wanted Perri to do the tire as she can be a little weird about that obstacle, still. The tire was one of the obstacle options on the start line and Perri was the first dog in her height class so I set her up in front of the tire. While the ring crew was setting the tire. She became obsessed with the chain clanging against the plastic tire. Well, I was making good decisions for her! She was very very slow coming off her start line and then did the dreaded stare. Thankfully the dog walk was right there and I got her on it and she shook it off and started running again. She was pretty light and happy but wouldn't send out to a distance tunnel in the Gamble. She actually took some initiative and went to the second obstacle in the gamble instead, so I went with it and told her Go go Go! and praised her at the end.
Standard was last and I gave considerable thought to scratching it. Even more when I got her out of the car and she was rather frozen and hypervigilant. I asked her to get in my chair (which we had been doing all day before her run.) and she went into her crate instead. Now, either she saw the chair as a precursor to her agility run and was saying "no thank you", or she was simply taking the crate since it was now available. By now the trial had emptied out so I was able to have my chair alongside of the crate rather than in front of it (blocking the entrance.)
I was not going to be stressed out by this and snowball with Perri. I did a lot of gentle massage on her sides and encouraged body stretches, we did paws up on the chair to encourage stretching upwards. I massaged her scalp and ears. And Perri actually loosened up and got slightly "springy" again. I don't know how else to describe this way Perri gets when she is relaxed. But she is very "light" and springy and pops around, rather than being sluggish and slow and staring around.
I chose to do a running start. I stood on the start line holding her up with just her rear feet on the ground and pointing her at the dog walk. What a blessing the course started with her favorite obstacle! She did fly off the start line. Back tunnel to jump and weaves. She did all 12 weaves to the pause table and I thought. We are golden now. Famous last words! We then had to do the teeter, to a jump, to a mild pull to a tunnel that was under the dog walk. Miss Thing went super wide (also, I lost connection and took for granted she wouldn't be as hard into extension as she was!) and found the most awkward approach to the dog walk ever and flew down that walk with her tail swishing. I teased "Unbelieeeeeeeeeeeeevable, Perri!!!" And we ran to her leash and ended the run and she ended the day feeling happy and proud.

And what a year for Perri. What a year.

Last year on this day we were at the CPE trial (which was going on in the other ring at this training center.) and I remember Perri was so shut down that she could not even complete a CPE Jumpers course. I remember scratching her from Wildcard and walking back to the USDAA ring to talk to my friend. I told her I was done. And I was. It wasn't that I gave up on Perri, it was that I respected Perri. And if she didn't want to play the game then that was that.

The year of training that I committed to with Molly has benefited Perri. Perri was my substitute dog when Molly's body couldn't play. She didn't make it easy. We began this year with our team work in tatters. Perri demoralized and me frustrated beyond all reason. Resentful. Molly's bad toe and my financial commitment to training made me fight once again to figure out what could help Perri. Some nights she would work. Some nights she would stare at me. Our instructor never gave up on us, never let me shut down on Perri, she saw what my dog needed when nobody ever has before. And some weeks, in the beginning, Perri needed more than I could give. It's no shame to admit this about myself. Honesty is a the first step to improvement.

Connection. Clear handling. Less pressure. A puppy. New medicine. Raw diet. Less pressure. No matter how much you think you can fool your dog, they know. Perri always knew I was disappointed in her and she could not stand it. She is fragile, she needs support. She needed me to be a better handler, to not be frustrated, to be a better human. She was asking a lot. But I'm ready now, I'm ready to be that person. I remember at the end of 2016 I felt so hopeful for our future and it all fell apart the next year. If Perri doesn't want to play agility in 2019, I can say for certain: I am grateful for our 2018 and all that I learned from it. I am grateful that a few more times, we got to run happy like the wind together. It's enough. 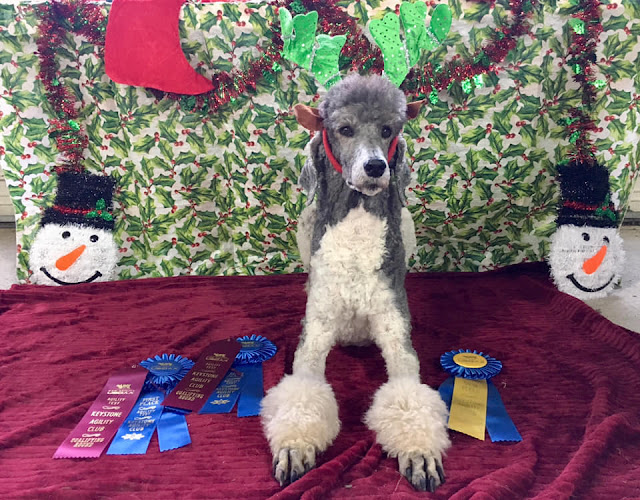 Posted by dogbird daily at 8:32 PM

Email ThisBlogThis!Share to TwitterShare to FacebookShare to Pinterest
Labels: cpe, ein, it's all about the journey, molly, perri, usdaa