Yesterday I had the opportunity to take Zorro to a NADAC-style fun run. Two rounds of Tunnelers and two rounds of Jumpers! What fun it would be!

The fun run was at the same training facility with the blue matting where Molly has gone lame twice, so I did not want to risk her hurting her bad foot again. I was feeling a little emotional about leaving Molly at home though.
This isn't a hike, this isn't an agility trial, this isn't just any old thing...this is TUNNELERS. A special Molly-thing. I was thisclose to bringing her and letting her run because I know she would have so loved it, and if it had not been winter I might have done so.

Zorro is still rather lukewarm about tunnels so I wasn't sure how our time would go. In puppy class we have been working on short sequences that involve "a lot of handling" and not so much courses that are flowing or straight lines. With the NADAC style courses yesterday, Zorro's extreme handler focus was highlighted. He does not lock onto obstacles or look ahead for them, he looks for me. Also, he forgot how to do tandem turns at a new trial site. Needs generalizing. It was a really great experience for both of us and a chance to adjust our training moving forward. It's just information!

Perri did one run, Open Jumpers. For the simple fact that Zorro's runs cost $15 and I only had a $20, and she was along anyway. She was very flat and uninspired, but she kept moving and didn't stare at all. She did have a mild stress sneeze about halfway through the run, but wasn't paralyzed by it.

We also went on a mini hike afterwards with our friend, to help her find one of my favorite geocaches in the area. It turned into a double hike since we needed a tool from her car to retrieve the geocache and it was muddddddddy!! Oh, the MUD. Both dogs got foot baths when we got home, especially Perri. And most especially me. I climbed a tree, I climbed a bridge, and I fell in the mud. I am sore all over. But any day with agility, geocaches and hiking is a perfect day as far as I am concerned! I did try for a bonus gamelands hike after that but I could not find the parking area and it was nearly dark so...another day! 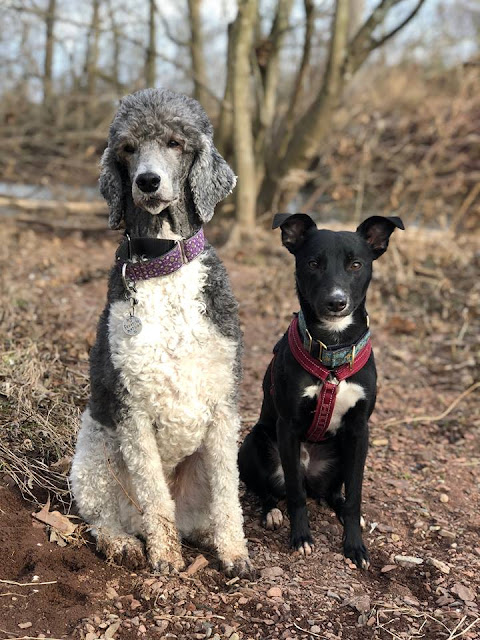 Posted by dogbird daily at 3:06 PM