Much like my PA State Parks goal, my goal of hiking all of the Appalachian Trail in PA has gone on a years long hiatus due to travelling barriers and finding reward in closer geocaching and dog sports goals. So, it was really exciting to get to finish another section of the PA AT this past Saturday! I took Zorro for a dock diving lesson at the place where we usually trial, an outrageous 120 miles from where I live, and could only get a training spot at 8am. That left me the entire day to go hiking someplace.

That some place was PA 94 to Center Point Knob, and connected with a 2012 hike that I did from Boiling Springs to CPK that finishes Section 11 of PA for me (PA 94 to Boiling Springs.) It was very satisfying to chip away a little bit at one of my dormant hiking goals.

My friend Dawn and I met at a Gamelands section within walking distance of the AT and drove to Sheet Iron Road to begin our hike. (I later hiked the .2 miles to PA 94 to "officially" complete the section, like a good nerd.) We hiked North from there, towards Center Point Knob. 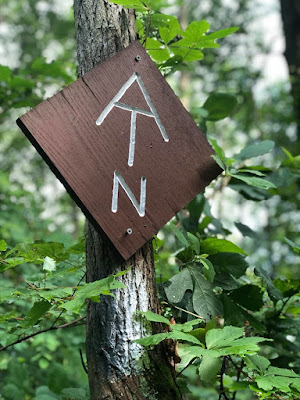 It was not long before the trail began to ascend into switch backs and we encountered some enormous....rocks! Very fun scramble through the enormous boulders and lots of fun photo-ops. And no snakes encountered. 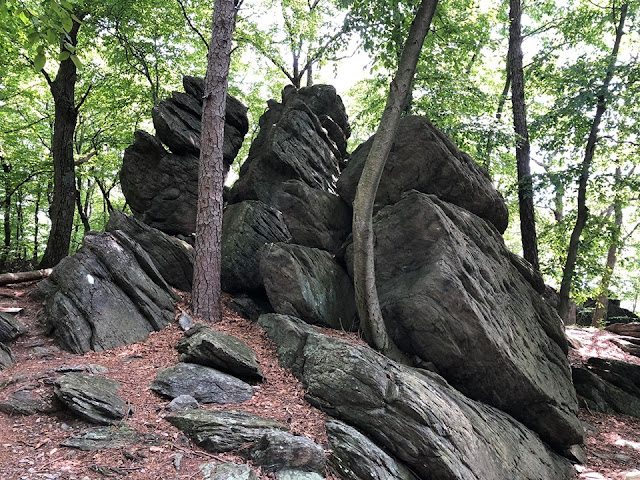 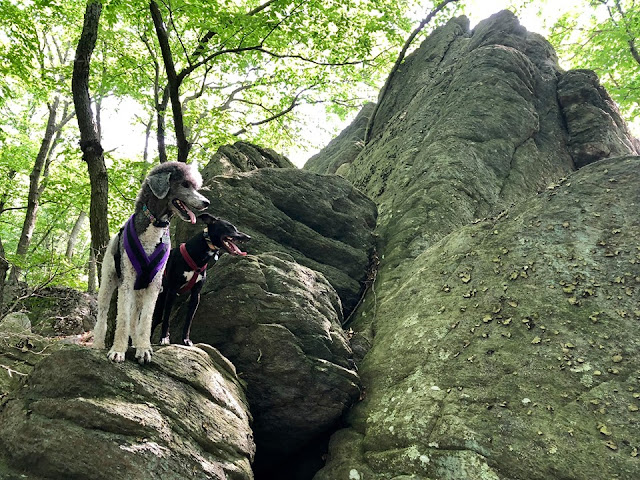 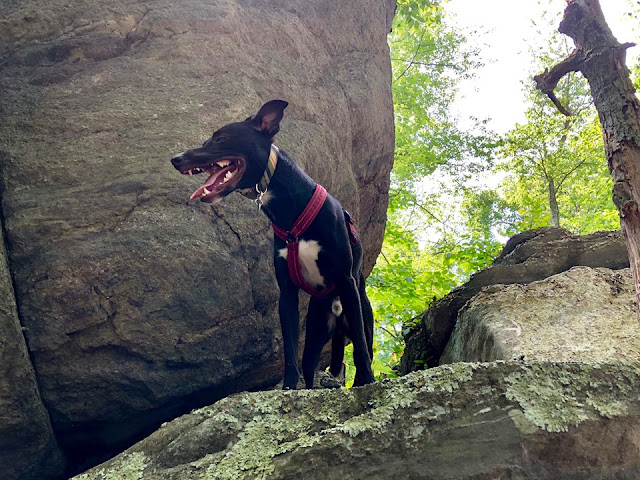 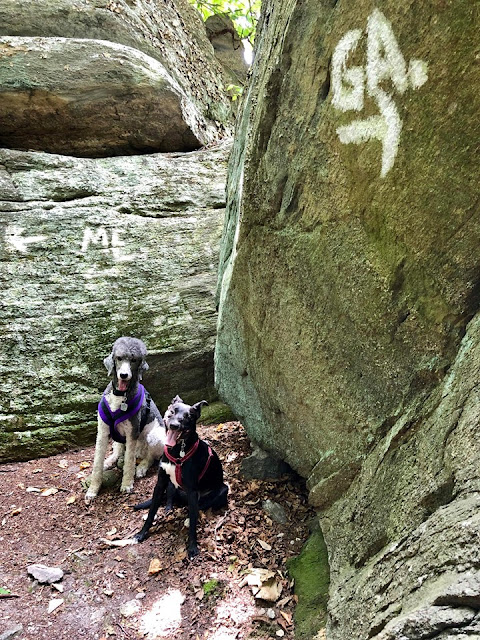 Down and up another hill, and surprise...more rocks! 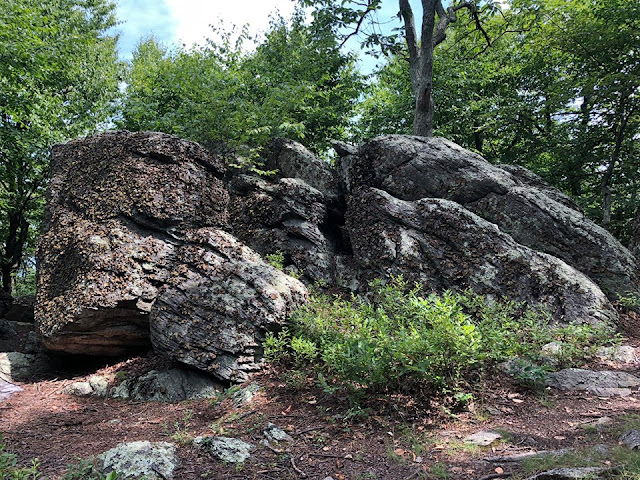 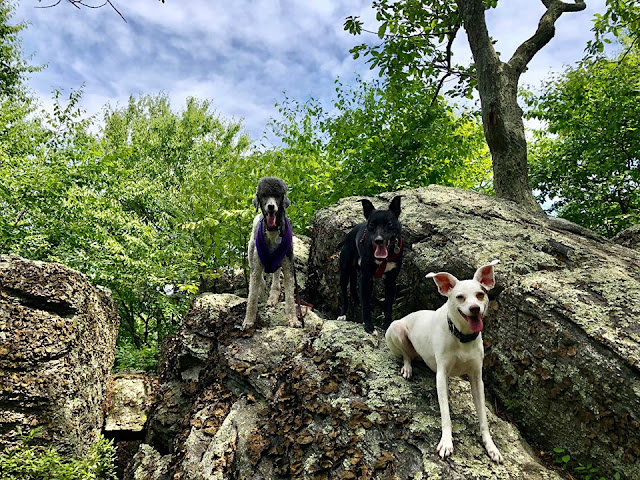 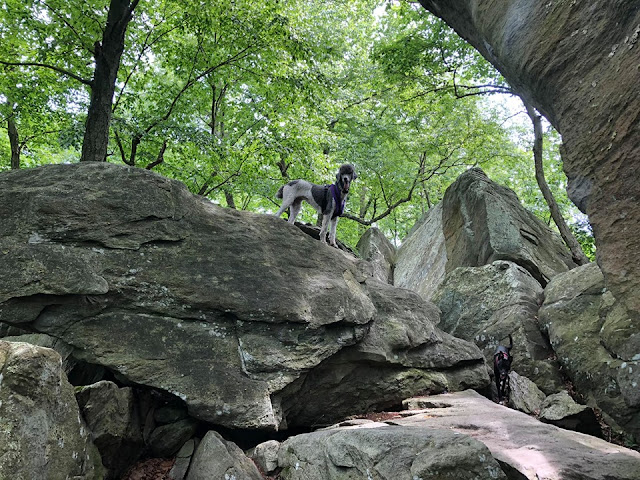 After that was another dip in elevation and a stream for the dogs. I did like this hike very much for the sake of the dogs staying cool and hydrated. There were regular streams. We went back up again, of course and stopped so I could eat some lunch because I was feeling rather hot and drained. I had gotten stuck working a 15 hour shift on call the night before and had to get up at 5am for a dock diving lesson for Zorro before this hike (which netted me about 4-5 hours of sleep.) So, I needed to get hydrated and eat some lunch. Poppy and Zorro were most interested in sharing my sandwich!

We continued on through a beautiful fern section, which I always love to see. The only downside was that there were storms in the forecast and the sky was starting to look pretty angry. We checked the radar and found a huge system heading right for us! Fortunately the Alec Kennedy shelter was only .1 mile ahead! So after another downhill and stream dip for the dogs and back uphill we were able to get the the shelter, use the privy and be inside and dry while a fierce windy thunderstorm rolled through for the next hour. Talk about perfect timing! 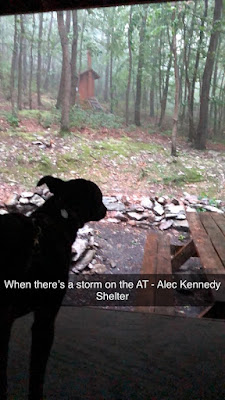 I found some ponchos in my pack, they had been there for years. Dawn and I had both forgotten our rain jackets so, they went to good use. Perri was so frisky after the rain, pouncing around and hunting and downright silly. I love when she is like that. One more up hill on switch backs and we reached Center Point Knob! Woohoo! 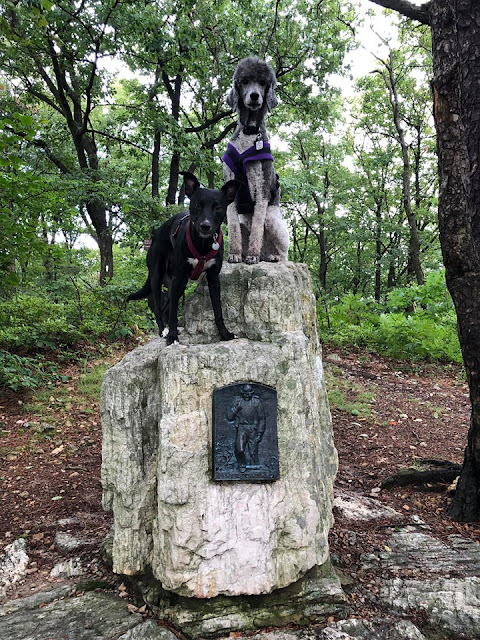 Posted by dogbird daily at 8:48 AM