In the spirit of catching up, let's talk about this summer's new titles!

The last weekend in July we drove to New Jersey to play some Performance Scent Dogs. It has been over a year since we got to play any PSD and I was hoping to finish up Molly's Exterior title and Perri's Speed title. Spoiler alert: we did!

I entered Molly in Advanced Buildings, so she needed a Clove target odor test pass in order to be able to play in Advanced. We have a mock NW2 trial in the fall, so I wanted her to have some experience with multiple hides at a trial. Anyway, for the Clove "TOT" she got silly, spinning around and leaving the chairs (In a PSD Target Odor Test, there are 12 chairs, one has odor.). I took her back to the start line and reset her and she walked over and alerted immediately. Face. Palm. We passed at least! The judge said, "Wow, her style leaves much to be desired!" Perhaps somebody would be offended by that, but I thought it was funny!

Exteriors was next and Molly made lightning fast work of alerting on a mess kit laying on the ground. I actually waited for a second alert because I thought she might just be batting around the plates. I felt bad about that, but after the TOT I was a little skeptical. PSD-NE (Novice Exterior title!)

We had a long wait until Perri's Speed search, and Molly's Advance Building search. I timed all the afternoon classes as a volunteer. Ate lunch. Went out for a nearby geocache. And then it was Perri's turn.

People, we worked hard on Speed. Perri has such a hard time qualifying because she is slow. She catalogues (this means that she finds all of the hides but passes them. She knows where the hides are but does not alert on them.) This class is a challenge to Perri's confidence. We have been practicing. A lot. I reward her as soon as she gets to each hot box and make a huge fuss over her cleverness.
It is not often that hard work pays off for Perri at a trial. At most, she barely Qs and I'm grateful for what she could do. This time? Perri crushed it. She alerted on every hide the first time she got to the box. She was efficient and happy and it made me so happy. She even ended up in the ribbons with a third place. In Speed!! That was Perri's PSD-SN title, Novice Speed. 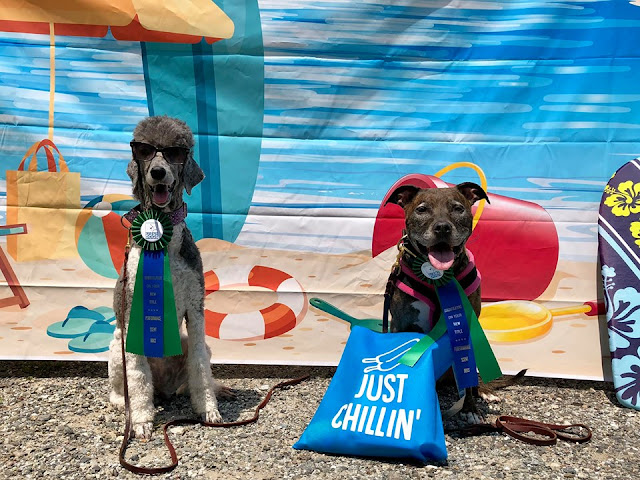 Molly did not qualify in Advanced Buildings. She did a good job working the search area. Alerted on one hide. The second hide was hidden under a plastic dog bowl. I saw her check it out a few times but she did not alert. Even when I showed it to her she gave a half hearted "haha okay." alert. That was strange.

I am not sure how much more PSD we will be doing. Last year there was quite a bit of trialing opportunities within an hour of me, but that seems to have diminished. There is another trial at this location in October. I would like to finish Perri's overall Novice title, and she needs two Exterior passes to do so. After that, with more AKC scentwork available more locally to us, we may be going that route.


Fast forward to the following weekend, and a different sport...World Cynosport Rally Obedience!

Molly attended for two rounds of Veterans but I'm sorry to say she wasn't at her best. Neither was I, since I had worked until midnight the night before. Molly was sluggish off the start line, I had to beg her along and then I missed a sign. Oops! We did better on our second Veterans round and qualified. We might revisit WCRL at some point to finish her RLV Championship title, but not this year.

Zorro was entered in two rounds of Level 1 and he was on. fire. He earned his RL1-Award of Excellence title with a 210 in the first trial, and earned a second place in the large and competitive Level 1B class with another 210. Another example of a lot of training time put in, and seeing it pay off. We lost no points on stands this time! Fool me once, shame on me.... There was no Moving Stand bonus this time to truly avenge my shame from the July trial. We had the food bowl figure 8 distractors, and the Left About turn. This video is about half of our run. My friend was in the run order near Zorro, so she could not really video.

Posted by dogbird daily at 5:51 PM