It has been four years since I have attempted any Parkour titling with my dogs. Perri and I failed Novice years ago due to my own inability to follow the rules, more on that later. International Dog Parkour Association released a limited edition Quarantine COVID title this year , with three available titling levels and I have been eyeing it up since then. Last week I decided to get to work with Zorro and earn that title! 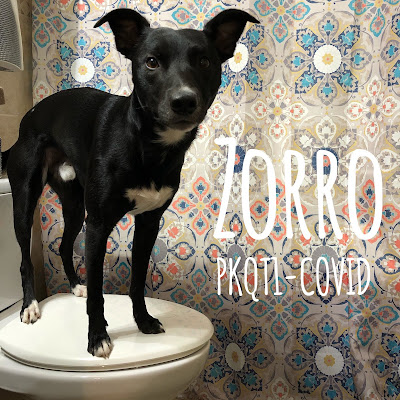 I was rather nervous about breaking rules. Here's what I learned:
The dog does not have to be wearing a harness for ground level or low obstacles. But if you want to, or need to, use a leash it must NEVER be attached to the dog's collar.

Take the time to set up good video angles with both hands in clear view. The dog must be shown getting on and off of every obstacle. No cookies in your hands. Don't do anything that could appear as luring. I got in the habit of making my hands flat like target hands.

Overall Zorro and I had fun putting this title together. There were seven categories. You had to submit 15 behaviors from the seven categories, and at least one behavior from each category.
There was
"Four Paws On": Hard, Soft, Moves, Plastic, Wood (grooming tub grate, dog bed, toilet, wooden wall art.)
"Two Paws On": Hard, Soft, Metal, Plastic, Wood (pot from the kitchen, coffee canister with plastic lid, wooden stool.)
"Back Up": We certainly strengthened his Back Up behavior! Your Back Up could be: Narrow, Tall (I don't honestly know what that means!), Over, Under or Through. I took videos for Over (the one I submitted - back up over an object, I chose a slip leash.), Under and Through. I got too anxious about not passing for some reason that I submitted the "safest" one. And poor Zorro worked hard the whole time to get the ideal video - and lots of treats! I was so pleased by "Under" especially having Perri lurking on top of her groom table supervising the whole thing but I kept fretting it wasn't enough steps, or I was not in the frame enough.


"Balance": Narrow​, Uneven, Wide, Wobbles, Soft​​ - We only did one from this category. Wide, on an antique firewood storage box handed down through Vince's family.

"Around": Short ,Wide, Two objects before returning, Long, Tight fit - we did a lot in this category and Zorro was pleased as ever to do so. I was strangely obsessed with his running around objects when he was a puppy and the work we did in our foundation paid off big time! We did a small piece of firewood for Short, our two wood buckets for "two objects", and a big potted plant for "Wide."

Here is the full video of our submission. I got the great news today that Zorro passed! I actually managed to follow all of the rules! Zorro is a good boy. Me? Room for improvement! This video is shortened a bit in many places. Dogs have to remain on obstacles for 5 seconds and be shown getting on and off, the dog has to go around the "around" objects twice. But for the sake of a shorter video, I clipped things down a little tighter.

Next venture: avenge Perri's Novice Parkour title! We are already hard at work.
Posted by dogbird daily at 6:44 PM