Today Molly and I returned to agility trialing!  It was...anticlimatic.  It was humid and swampy-feeling.  We have had a very mild summer until this week and boom, it's in the 90's again.  The training building was even more hot than outside.  Sweat was running down faces, soaking into shirts, it was everywhere.  It was hot.  Molly had a Perfect Day, 5/5 Q's and I am grateful for that for sure.  But she was really flat and not driving.  She was paying close attention to me and running well for me.

We did two rounds of Snooker first (Yikes, talk about quick planning!  Not one but two rounds of snooker planning first thing in the morning?)  The first round Molly was really running well and driving nicely - it was her best run of the day.  The second round Molly was starting to get hot and was doing some hesitating on jumps that I was trying to send her to.  We cleared the opening and closing for both rounds, which brings us up to 3/5 needed Snooker Q's for her C-ATCH title.

Jackpot was next with both girls.  This was a Non Traditional Jackpot, you had to send your dog into a tunnel from 10 feet away and whatever obstacle they performed after that tunnel was worth double points.
Molly is in Level 5 and she just squeaked by with exactly the needed amount of points, 44.  Molly was running really well until our second send, she abruptly became really sniffy and was almost behaving as though she had to potty.  (I had not taken her outside for a pee as I usually do since I had been scribing before our run.)  We did finish the run out but I had to cobble together a last minute plan because of the time that we lost and it was not on the smooth side.


Perri went next and I was super proud of her.  She was really driving and running well!  She did not hesitate on either tunnel send, I was surprised by that.  I am a little disappointed because I did not ask her to repeat her weave poles.  I could say that I did not want to dash her confidence, and that would certainly be true, but I also knew that we were running out of time.  One of these days I am going to be a handler who does Everything Right.  In any case, Perri earned 46 points, and she only needed 32. (Why yes that is two more points than Molly!)


We had Standard next and Molly was moving at a reasonable clip, but really had no energy.  I am not happy about her "toe in the contact" on that dog walk.  She got her weave entry but crawled through them.   She was a good girl on her Aframe today, though.  This was our first Level 5 Standard Q out of ten needed.  The journey begins!

And finally, Wildcard.  Molly had absolutely no energy left.  She was as flat as could be.  On my first wildcard choice, I chose the line of 6 weave poles.  Normally I will avoid this at all costs and only do weave poles if we absolutely have to (and we did have to, a second time in the course.)  But since Molly and I have been working on weave poles, I thought I would stop being "afraid" of poles.  Well she missed the entry to go sniff the number cone.  Then she crawled through the poles.  Then she walked, and I mean walked to the next obstacle.  We survived, somehow under standard course time, but it was not our most exhilarating run.

Still.  We had a "Perfect Day".  We churned out some Qs for the C-ATCH.  It was not a train wreck.  It was just really hot. (not that more than a few dogs of the herdy persuasion cared in the least that it was hot.  But whatever.  Run the pitbull, er, dog you have :)  I won a worker-raffle basket full of candy, dog toys and a huge bag of Charlee Bears.  (Molly got to rip two of the toys to shreds when the trial was over.)  It felt good to be back to trialing and doing trial jobs.  It felt great to be running my girls, for better or for worse!


She is beyond thrilled.  The joy cannot be contained. 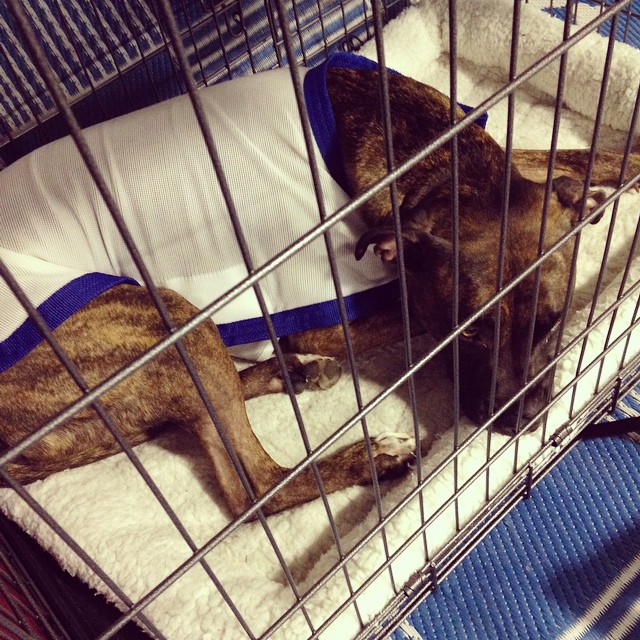 Oh!  Ein is responding really well to the antibiotics that were prescribed to him.  The swelling has decreased dramatically and he continues to not show any signs of pain.  I opened his mouth today to look at the other side of the tooth (the medial side) and there I did see some pus inside of his mouth.  Ick.  I will be calling the vet first thing tomorrow morning to get the extraction sorted out.  I think that it will be best to have both carnassial teeth pulled, as much as I hate to do that.

I think the swelling went down just a little bit! 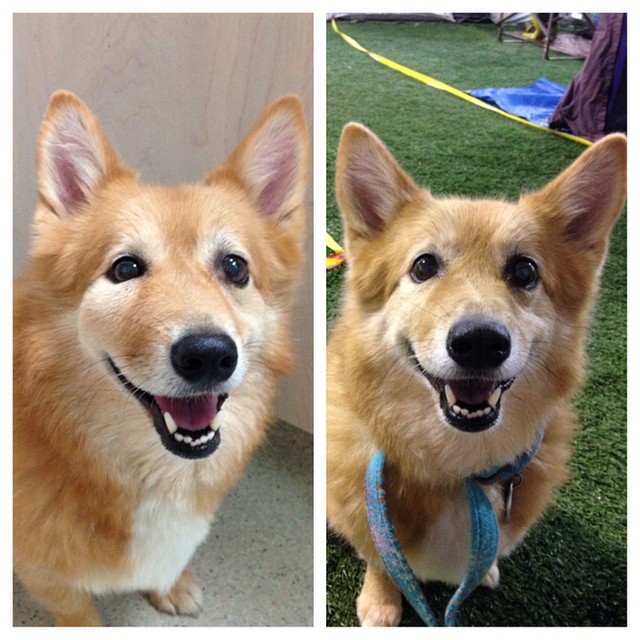 Posted by dogbird daily at 4:03 PM