This was a big weekend for Perri and it made me employee all of my mind over matter positive thinking.  I was chanting "confident" and "smooth" to myself, I was declaring a brave poodle and not voicing any of my concerns because words have power.  They do.

This weekend, Perri was running a full weekend (to compensate for Molly needing to be off for her toenail.) at Flexible Flyers.  On dirt footing.  And that is fine.  Except that the last time she ran there was at a fun run and she did her best impression of a combination of stress zoomie Molly combined with a shutzhund poodle biting my arm.   Stress?  Something about that dirt footing under her feet made her wild.  She was afraid of the dog walk and teeter.

But, this is one of my favorite venues that runs CPE trials, with the friendliest people and the second closest to my house so...we have to get used to running here!  And Perri did great.  She also met her new "boyfriend", Joey the brown spoo! 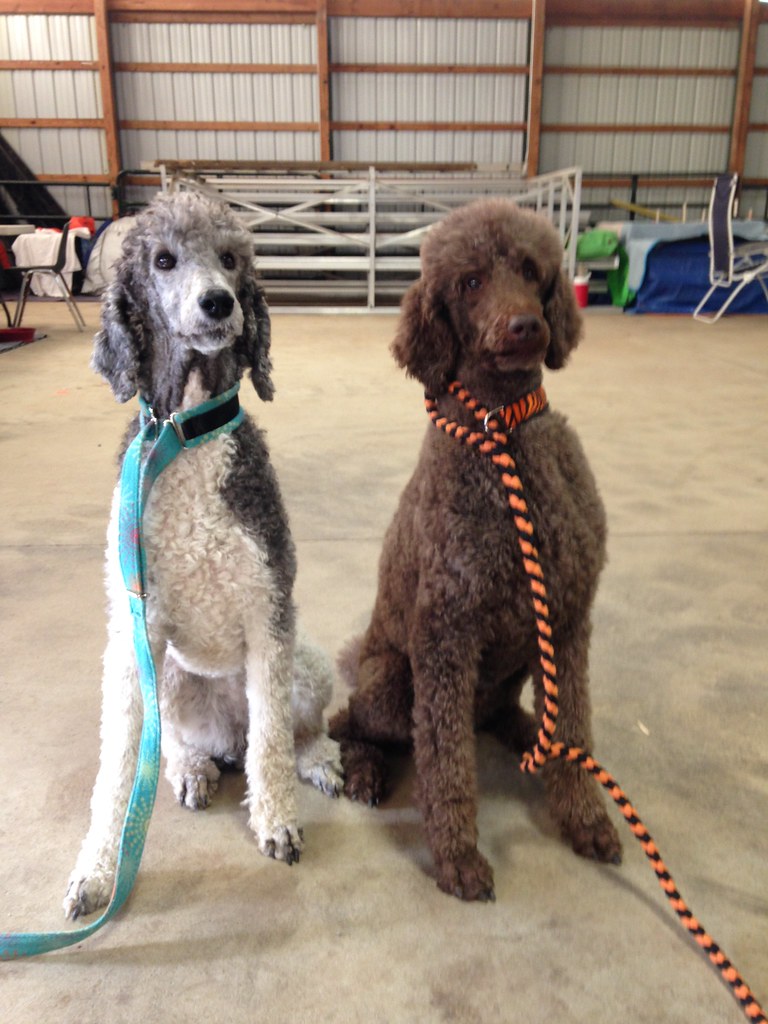 Fullhouse first.  We "only" got 22 points but that was enough to qualify but Perri did indeed get some stress zoomies, but she was still listening to me thankfully.

Still thinking positive for Standard next!  Perri did a beautiful job on her Level 3 course.  She did not have to weave 12 poles, but instead 6 poles twice in one course.  She missed both entries.  I was ... really shocked.  Perri had been doing splendidly with her weave entries at trials and I was feeling more than a little smug about it.  And with the missed entries came stress.  And for some reason Perri stressed up at this place.  She was doing some pouncing at me and growling through the whole weekend.  On the second set of poles she froze and just stared at me, I was not sure if she was going to shut down and stare or start running.  I spoke softly to her "Perri you can do this.  Now weave."  And...she did.  We were five seconds over time but we still qualified.  What I cared about the most was that she didn't start sniffing or staring, but she stayed with me mentally.

Next Wildcard and since we are in Level 3 there were weave poles.  The course went really well until then.  Perri missed the entry and stressed and we had to work through it.  But she did not shut down!  This is amazing to me.  And once she got into the poles...she was just fine.  We were seven seconds over time because of the weave pole issue but that is okay.  We needed to work through the poles on her time instead of me trying to jam her into the entry over and over.

We ended the day with Colors.  The course was a fast flying course with one tricky bit where I forced myself to do a front cross and pulled it off so  nicely, I was really proud of myself for pushing out of my comfort zone.

Perri finished her Level 2 "Fun" and "Handler" titles on Saturday when she earned Qs in Fullhouse and Colors. 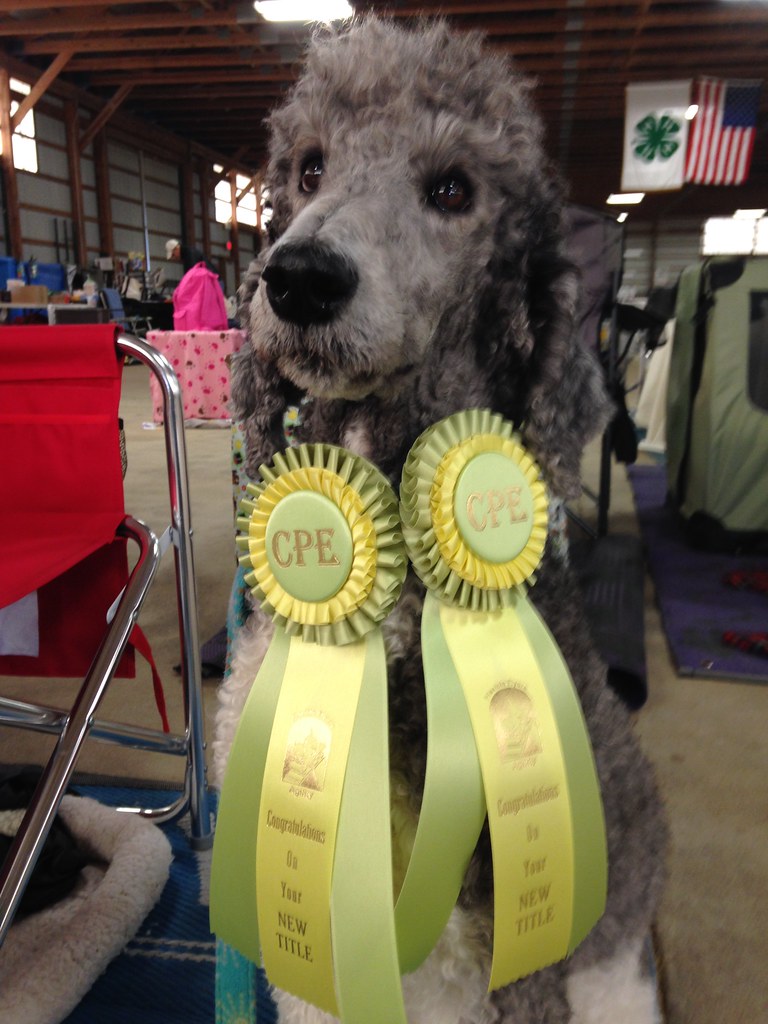 Sunday started with Jackpot.  This was an "All Level Non Traditional" Jackpot, which I despise.  The gamble could be done at any time, and there were two gambles.  You could do both, or just one, but you had to do one.  The easiest one was too hard for us.  The distance from the send line to the second obstacle was probably 12-13 feet and in the rulebook it states that suggested distance for Level 1 and 2 is 5' with a maximum of 10'.  This is for traditional jackpots, a judge can do whatever he or she likes for non traditional...but it still was an enormous challenge for a green dog.

With that said, Perri and I had a good run.  I again used a practice opportunity for a front cross in the opening.  Perri starts to get a little stress squirrely after the second Aframe.  You can see me pausing out at the end of the ring, and it wasn't my normal confusion.  Perri was starting to stress up hard and was growling at me and posing like she wanted to start zooming.  I was centering her and telling her to Stop and Focus.  We tried the gamble and well, you can see what happened.  of course it was too far for her to send.  The tunnel was pointed towards me and that is the way that she ran.  This was my favorite moment of the weekend.  Perri did not understand what I wanted.  Three times.  She was "wrong" (she was NOT wrong, she was overfaced with a challenge that was out of her depth. But she was "wrong" in her own mind.)
She did not shut down.  She did not give in to the luxury of zooming.  She pounced her way over to her least favorite obstacle, the teeter, and performed it for me.  Maybe I am reading too much into it, but I saw my dog offering me something else when she could not understand This Thing You Want.  We ran the gamble and ended our game as a happy team.  I can not believe that my dog did that.

Another Standard run was next.  With a tough weave entrance that we failed spectacularly.  I am feeling really discouraged about this weave issue right now - but I have to look back and remember that Perri does not generalize well...she didn't used to be able to get weave entrances when we started training at our new place and now she can so....  We will survive.  The rest of the course was a breeze, though and we qualified - we are officially halfway to completing Level 3 Standard.  Whoah!

Next was our first time in Jumpers Level 3 and it was ridiculously flowy and we aced it in 22 seconds.  A real confidence builder!


We ended the day with Snooker.  We did the opening and I didn't support a 180 enough and Perri ran past the jump.  When she felt me stop she turned around and pounced and growled at me.  I told her to Stop and got her to do the jump I needed.  I messed everything up because I did not start the Closing sequence properly.  The rules of Snooker are complicated and not for the faint of heart, but trust me - Perri ran great and I sent her to the absolutely wrong obstacle and we got whistled off.  Oh well!  She had no idea and ran the last few obstacles and landed on the pause table with her tail wagging.  Yay!

So I don't get to brag up a "perfect" weekend this time around but that is just fine!  So many of the worries that I did not allow myself to indulge in mentally or verbally did not happen.  Perri adjusted to new footing in a new place better than I ever expected and I am really really proud of her.  She is becoming quite the agility dog!  I am discouraged about the weave poles.  And of course when we got home, I could not resist practicing them in the garage, even with all of the weirdest entrances that space would allow and she was fine. (Do not fear her being overworked, she was paid royally with ham.)  We need more generalization so I think a trip to a park or two will be in order.
Posted by dogbird daily at 3:20 AM