I had a very cool day out on the road with my girl dogs today.

First stop was an Obedience match with Perri.  The last time that Perri was at Let's Speak Dog was for a January CDSP trial and she was a stressy mess for that.  And she was a stressy mess today.  She was worried almost as soon as we walked into Let's Speak Dog.  Ein has struggled with this place in the past too, I don't really understand why.  Perri did not want to practice her "crawl" trick.  Her Sit Pretty was the most feeble of upward movement.  She was barking at noises and staring at big dogs. 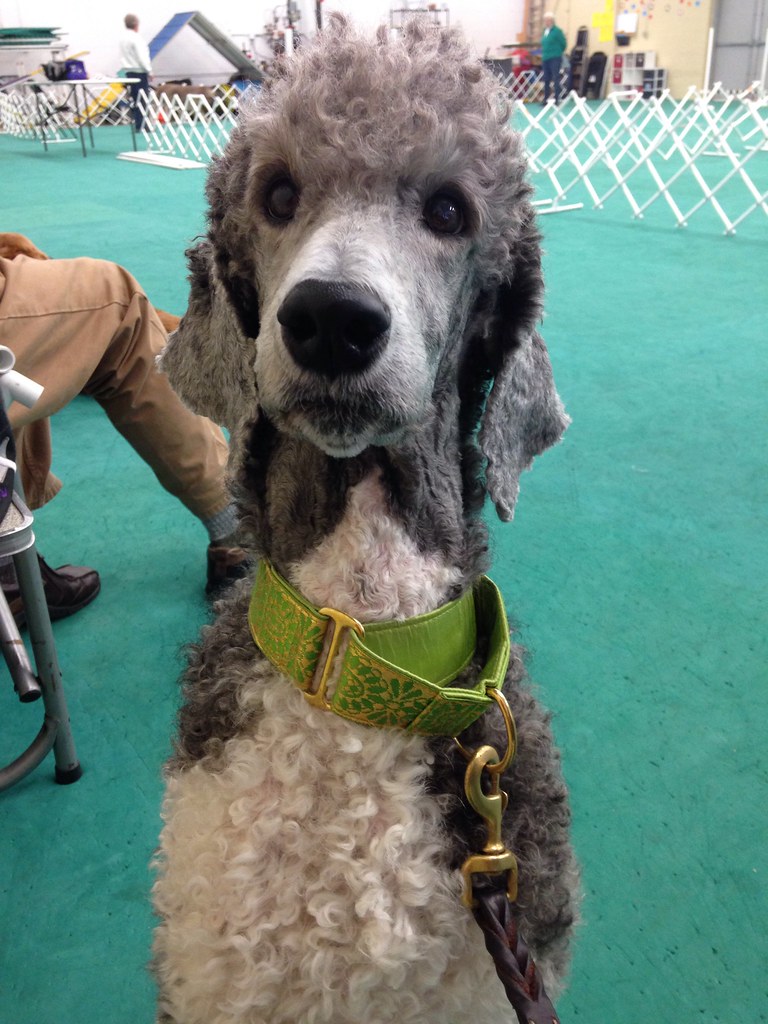 I was not panicking.  We went into the ring and started the Heel on Lead.  And I got pretty good engagement!  I lost her after the left turn, her nose went to the floor.  I immediately ended the exercise and walked away from Perri.  When she reengaged with me (which did not take very long) we began again and finished out the heel pattern with excellent attention.  The Figure 8 I lost her on the second step to judge sniffing and I again ended the exercise.  We restarted and I had a poodle by my side!  She was nervous but she was trying so hard and she did not sniff anybody's butt and she stayed in heel position and I was so proud of her I could go insane.  The Stand for Exam was beautiful.  She kicked back into a Stand on a verbal only command and held her stay rock solid.  Heel Free she got stuck on the set up.  Twice.  This has not happened in a while.  The third time I supported her with a hand and verbal signal and she came up with me and we really had a nice heeling pattern after that with no disengagement.  She flickered when we came towards the mirror on the wall but reengaged with me so quickly that I let her keep working.  The recall she did not anticipate, she recalled at a nice clip.  She sat about a foot away from me but given how nervous that she was and how she was recalling towards a lot of people and dogs moving behind us outside of the ring, I felt it was best not to make her repeat.  The finish she move on hand signal alone, but paused and stared at something behind us.  I repeated my signal and she popped back into heel position, quickly and straight.  I regret not setting her back up in front position and repeating the signal that way, but oh well.
Group stays were...so Perri.  She held her square sit and stared at me with a most noble and serene expression on her face for the entire minute.  On the down I gently pushed her into a rolled down.  As soon as I reached my spot on the other end of the ring, she popped back into a sphinx down and held that the entire three minutes.  She was looking around a lot, she was sniffing some, she was disturbed by the door opening and closing, but she never came close to breaking her stay.

It wasn't perfect, and it wasn't as flashy as our match at Suburban a few months ago.  But!  Perri was incredibly shaken by the environment and she still worked so hard.  She did not shut down one single time on me.  And I am proud of myself for holding my criteria.  This is so difficult for me.  I want so much to do a good job and to fit into the picture of a proper ring performance that I want to lure Perri into that picture.  It won't do.  We are not heeling, sniffing, coming back into  heeling for a treat.  We are heeling.  Period.  Perri seemed to respond really well to this consistency because when I know exactly what I want and behave as clearly as possible towards her, she knows exactly what I want and that helps her feel secure.

After our ring time and between the group stays, I let Perri rest in the car.  On our way there a couple nervously approached me and asked if they could pet Perri and ask me a few questions.  I said "Well Sure!"  The girlfriend seemed relieved and asked me how long I had been training because my dog was amazing and listened to me so well and was "spot on."  I was really surprised and spluttered that she did okay but that she was really nervous.  "Oh no, I thought she was amazing!"  The couple were first time dog owners working their puppy into manners and had stopped by Let's Speak Dog for some information on continuing and stumbled into an Obedience Match.  We all laughed at how "those people seem really intense."  Ohhhh you have no idea.   Yes, they were "pet people."  But it was still a wonderful compliment and a reminder that I have a great little dog and sometimes I can't see the forest for the trees.  In about fifteen minutes, I brought Perri back inside and let her relax in my lap and eat Charley Bears.  And then we worked on set ups outside the ring.  Moving from static position into heeling.  Perri was much more relaxed and did a really super job.  I have been really tempted to try Novice again with Perri, but I think at this point we need to continue doing agility trials, continue doing matches, and get that confidence and comfort level up more.  For both of us.

From there we drove out to K9Jym to meet our friends and play some agility with Molly!  Saturday afternoons are "OpenJym" days, so you can practice whatever you like on a course while taking turns with others.  And I wanted to practice generalizing weave poles!

Molly did amazing.  She was ridiculously high and panting really hard on her first time out on the course.  She flew into the weave entry and back to me.  I sent her again and she flew into the weave entry and skipped two poles.   After that she did the 12 weaves very nicely so she got to play tug with her Wubba and then we did a jump sequence into the poles.  And so it went.  By the end of Open Jym Molly was nailing those weaves from any angle no matter what I was doing and hopping through them pittie style, tongue lolling and froth flying. (I don't know if she will ever be a "one stepper" with that big old front end of muscle and skull!)   And I don't care, as long as she is consistent and happy.


I showed this video to my husband, because he was ring crewing Molly's Wildcard run at my club's October trial - the run where I asked Molly to weave and she stressed up hard and zoomed in response.  After that class was done he came to pet Molly and told me most somberly, "She doesn't like those weave poles."  He was really impressed by this improvement.  And so am I.  Some might have said Molly was ruined for the weaves.  I certainly never expected such a turn around from the sneezing, sniffing, oozing and slow mess that Molly had stressed down into when it came to the weave poles.  Trial weaves will still be a work in progress, but right now I am absolutely amazed at how resilient this dog is.  We have been working on retraining since August and here she is, really enjoying something that used to stress her out incredibly.  I never taught her the weave poles properly the first time - and I had no clue that I had not taught her properly.  I have been and still am clueless of so many things, but one thing is for sure... my dogs do not hold it against me.  My dogs grow and learn with me, they teach me as much as or more than I teach them.  They are true partners, and they are amazing.
Posted by dogbird daily at 4:38 PM