90 Degree Weekend, So what?

This weekend was a break from any trialing.   I had signed Perri up for an obedience match on Sunday, but I just was not feeling it.  I struggle with having motivation and personal strength when it comes to Perri and Obedience.  It's the mental struggle of always wondering if Ob is a good "push" for Perri...or not.  It did not help that I saw Ein blossom from a fearful rally-o dog to a confident head turner after a long break of lighter work.  I have to wonder if things could be the same for Perri.  The Right Decisions are always so hard and confusing to sort out.

On Saturday we went for a river trail walk by the Susquehanna River with our "therapy dog" friends.  Both Mary and I love to walk, and explore, so we picked a spot to hunt some geocaches and enjoy a walk that neither of us had been to.


The poodles had a great time chasing each other in the river! 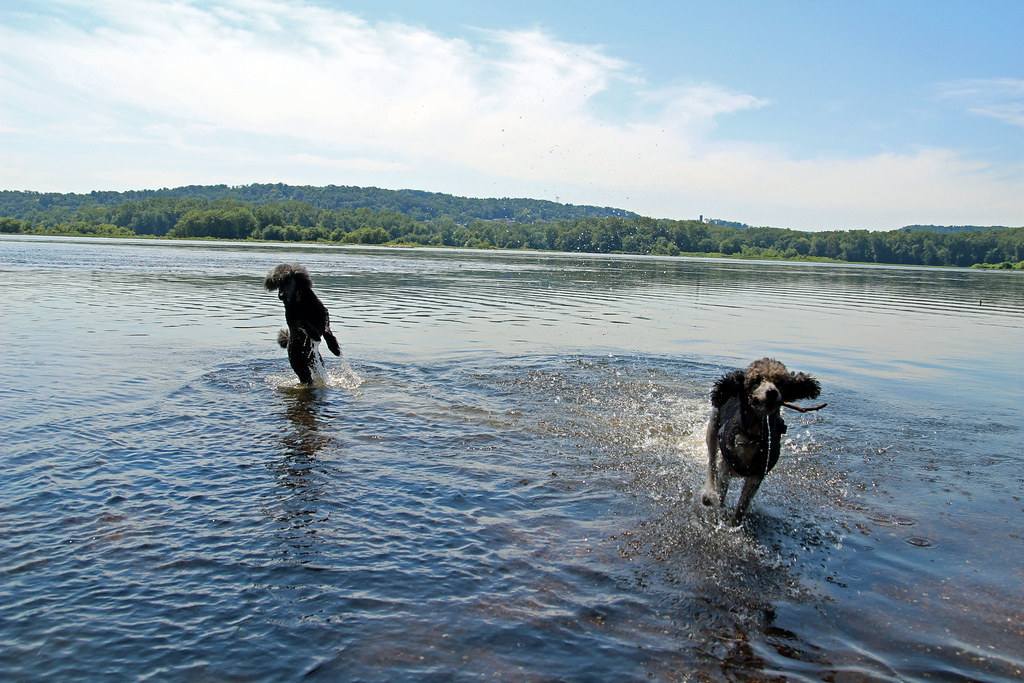 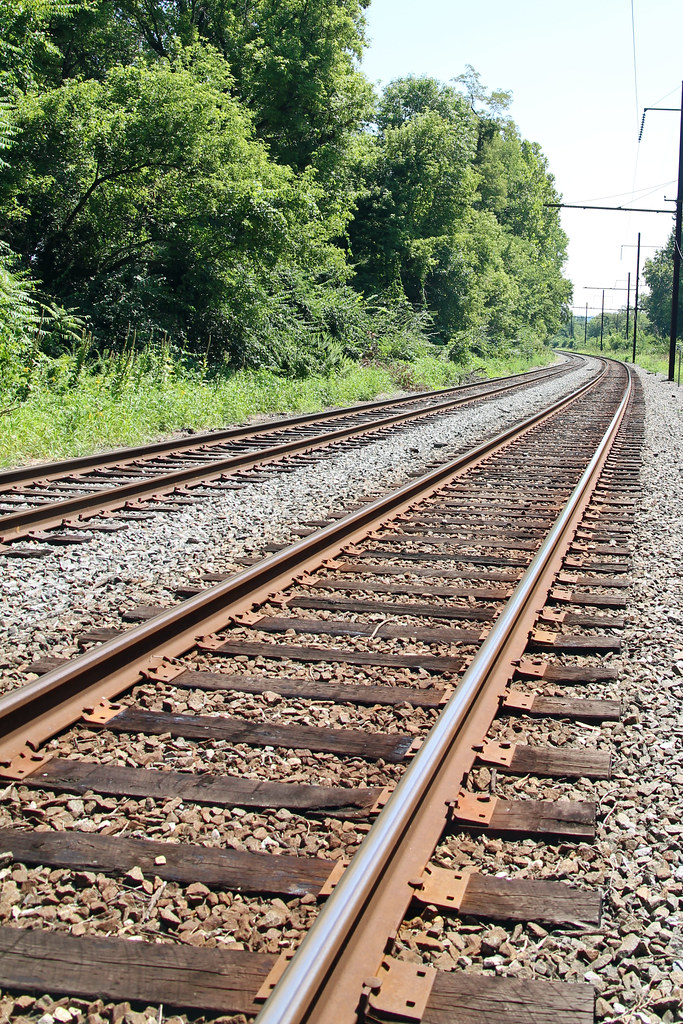 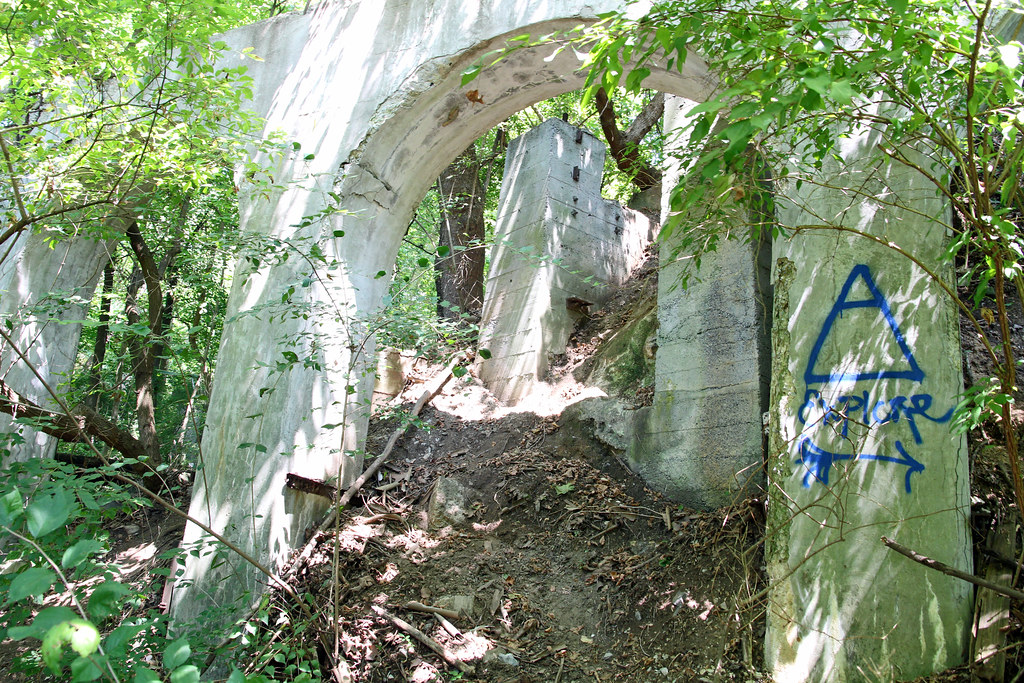 I was taken by surprise by the "White Cliffs of Conoy", a limestone quarry right on the River.  I love surprise discoveries like this!  The Cliffs were so white on such a sunny day that I felt like a mole squinting and dazzled by the brightness of them.  It was my favorite thing that we saw.  I grew up near this River, and to find something totally new to me was a real treasure. 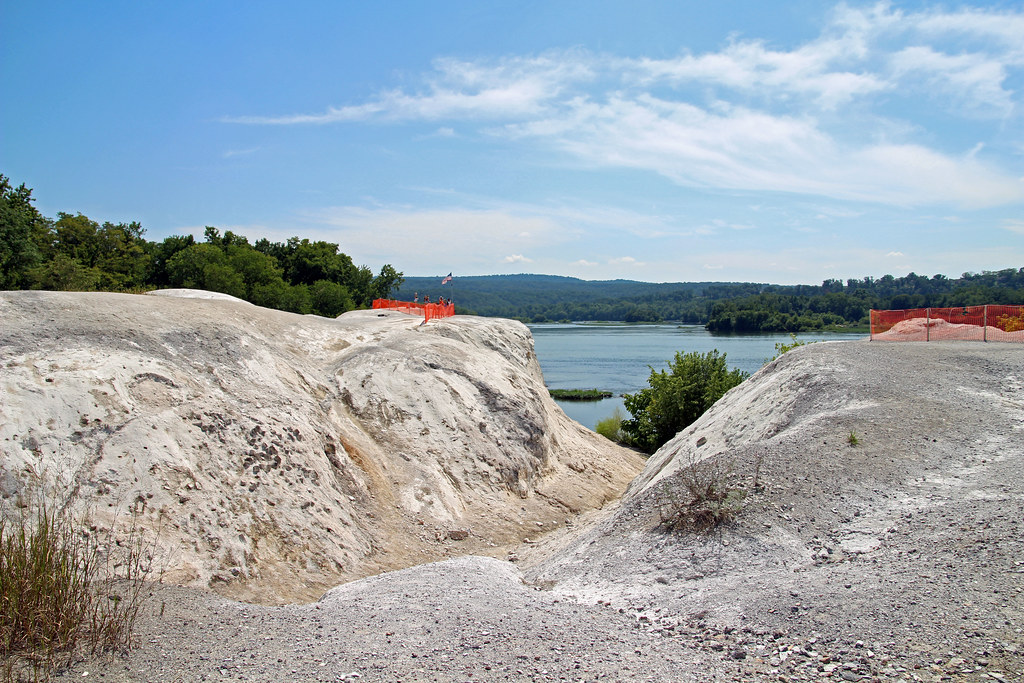 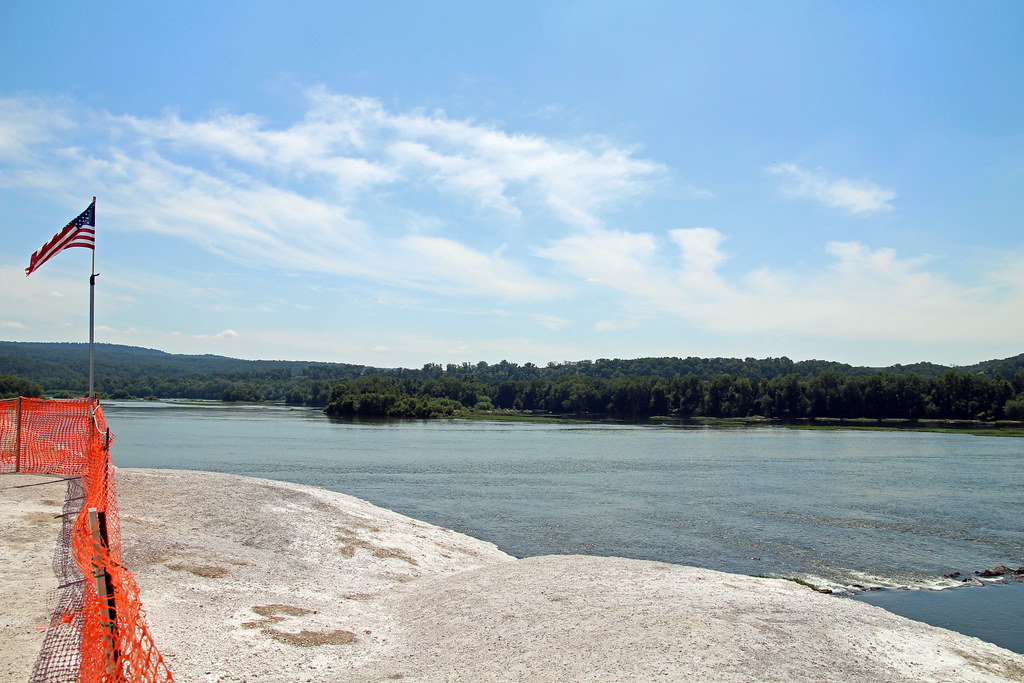 It was a hot day and Mary's oldest dog Cookie flopped down trailside, and refused to move.  Very very unlike her!  We were worried she was in pain.  We had walked two miles, it was a hot day (though the dogs had plenty of water.) so we decided to head back the way that we had come.  I carried Cookie for a little while until she got wiggly and felt like walking again. 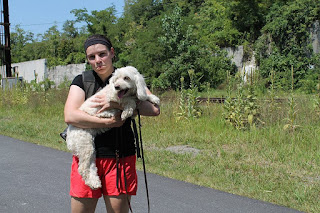 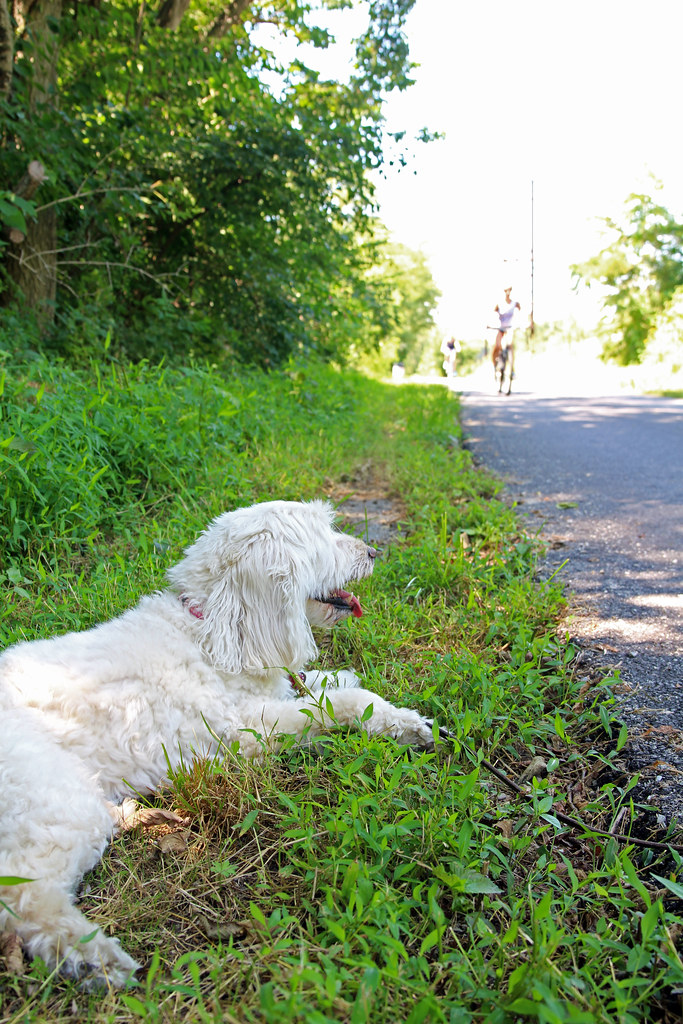 Cookie has cataracts and I think that those white cliffs made it really hard for her to see!  My own eyes took a while to readjust, and I understood exactly what was going on.  Maybe Cookie had a similar experience, only she might have been a little troubled by seemingly going blind.  But then, I am always coming up with Reasons for why dogs do things...right or not!

We returned to the access spot on the river and let the poodles run wild and ate some lunch. 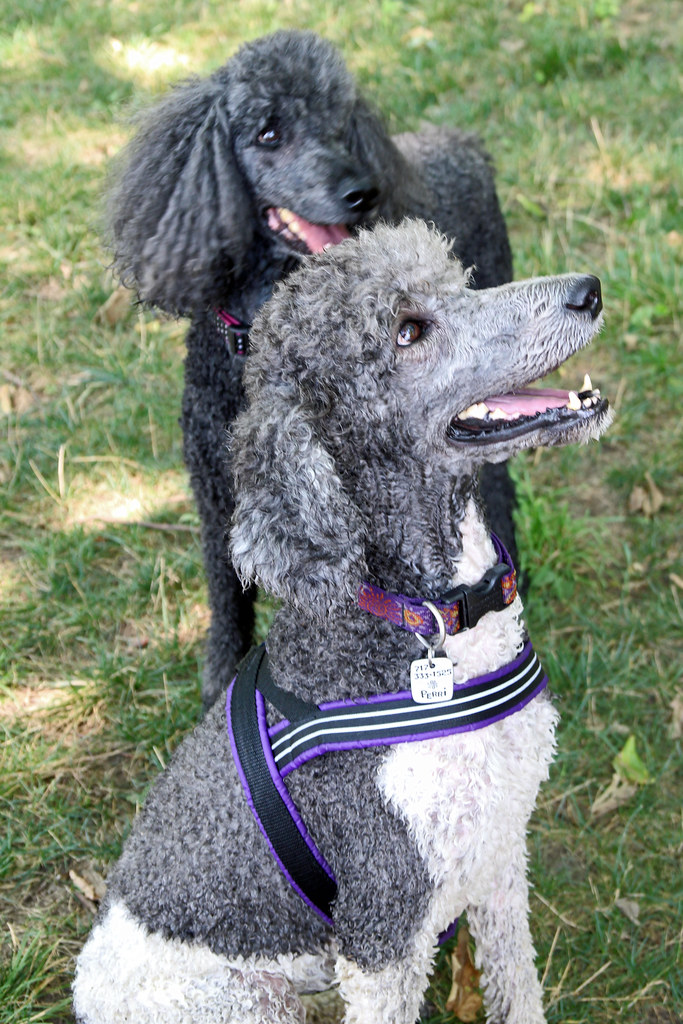 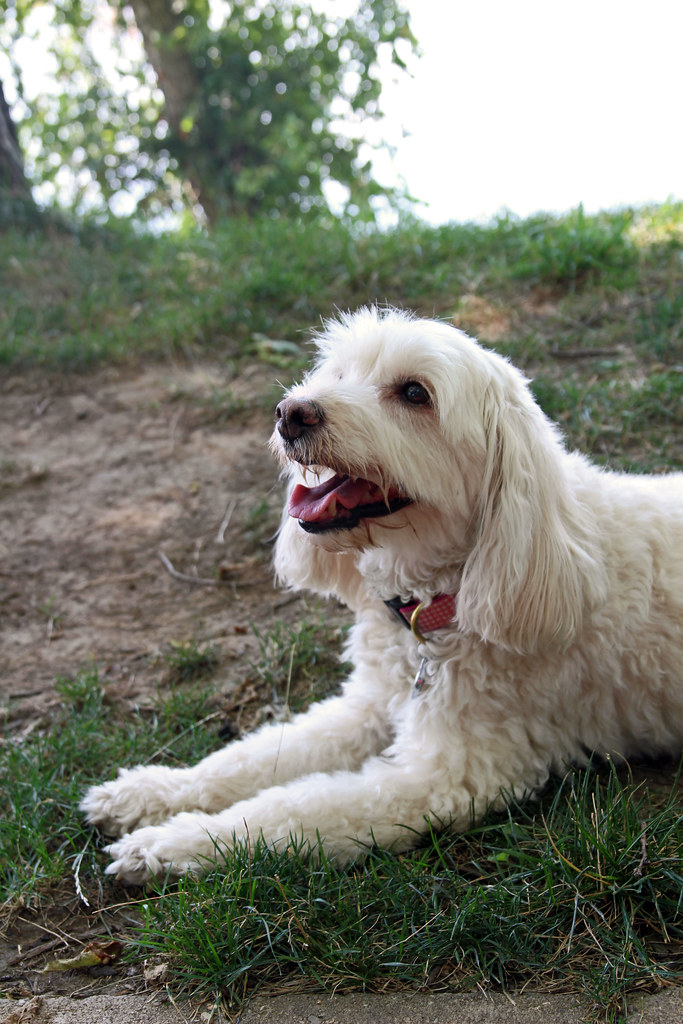 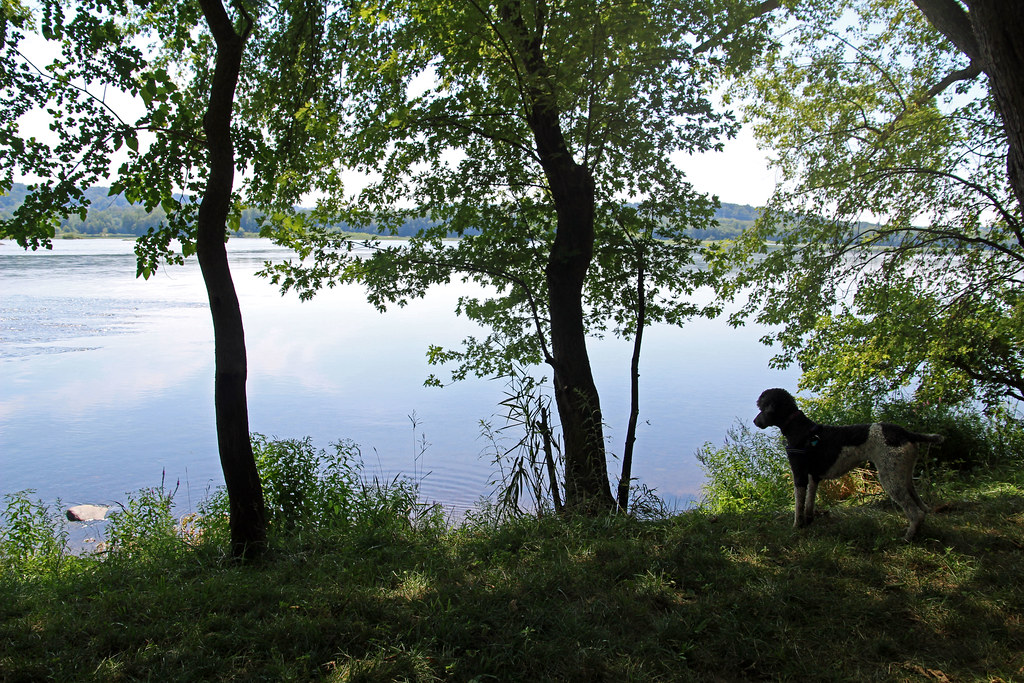 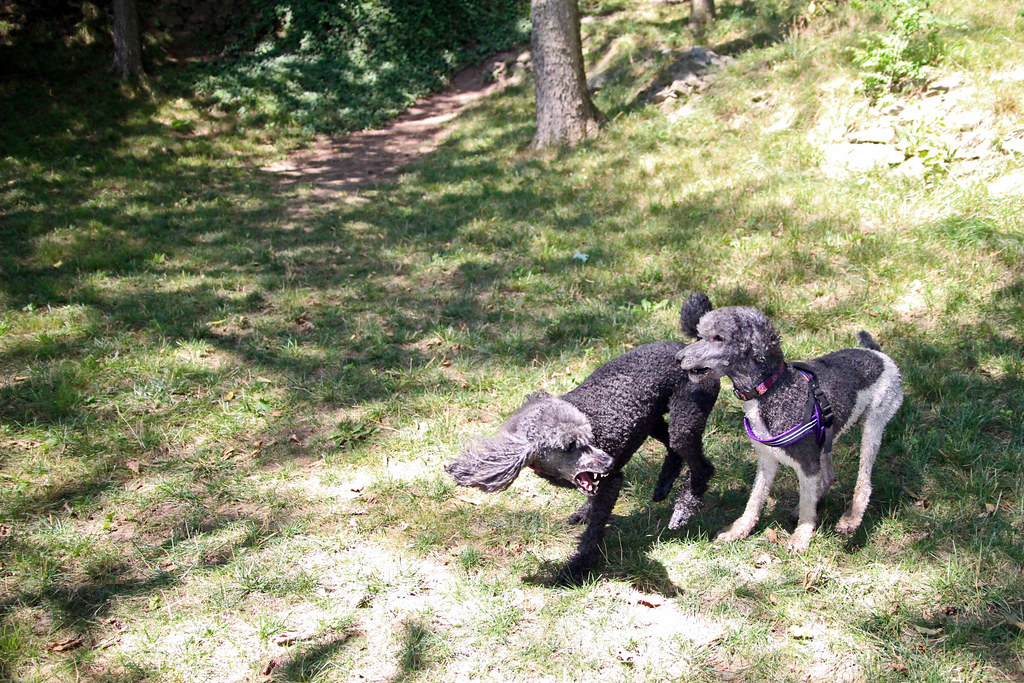 We made a pit stop on the way home and visited "Breezy View Overlook" right before getting onto the highway.  No one wanted to pose nicely for a picture! 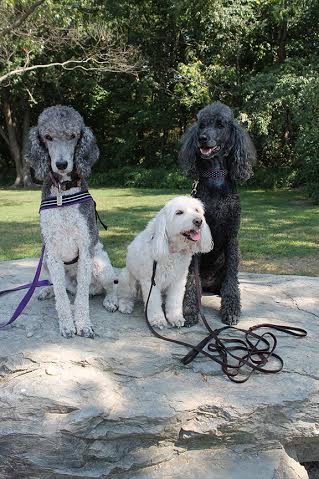 Sunday, Vince and I decided to head out to our local Cabela's since they were having a Dock Dogs event there!   We rode the motorcycle there and stopped for diner breakfast along the way.  I loved watching the dock dogs, enjoying all of the different jumping styles.  I realized that if I don't do this with Molly at least one time, I will really regret it.  I wanted to last year but the lack of events and the cost of a likely one or two time opportunity to earn legs or scores or whatever necessary in Dock Dogs put me off.  But...I don't want to someday no longer have my Molly, and always wish we had tried Dock Diving.  There is an event at the end of September that we are probably going to try.  I would be floored if Molly would not want to jump off of the dock!  And if not this year, next year.  Bucket list! 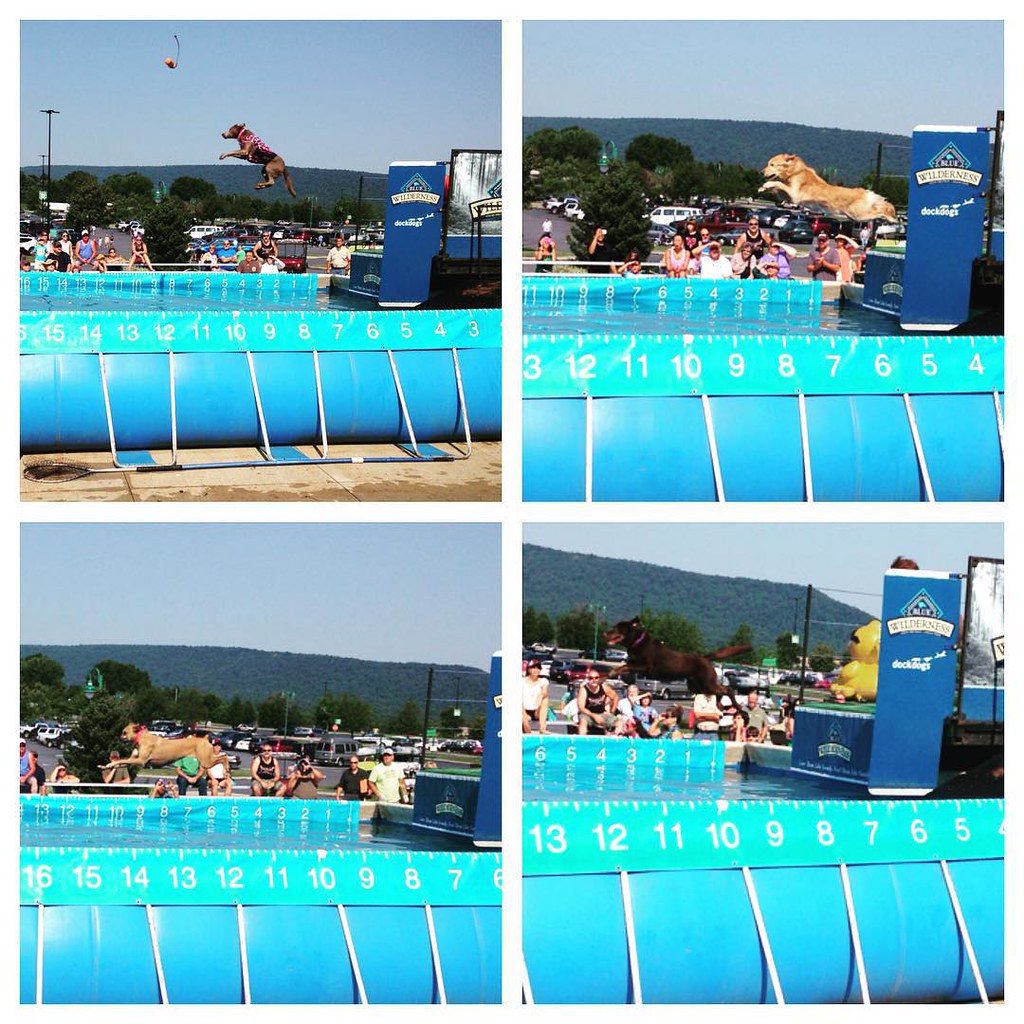 It was a ridiculously hot day but we wanted to spend some time outdoors with the dogs, so we took them to the local park and enjoyed about two hours of creek walking.  Everyone got to be off leash, splashing around, rolling in dead stuff and eating grass. 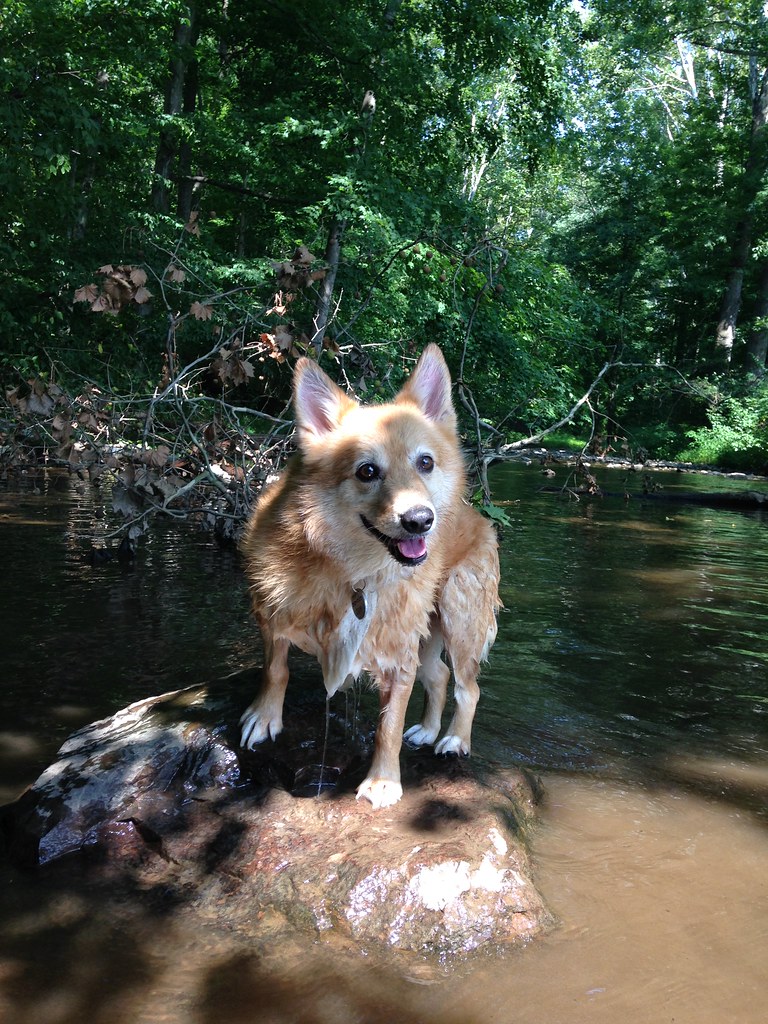 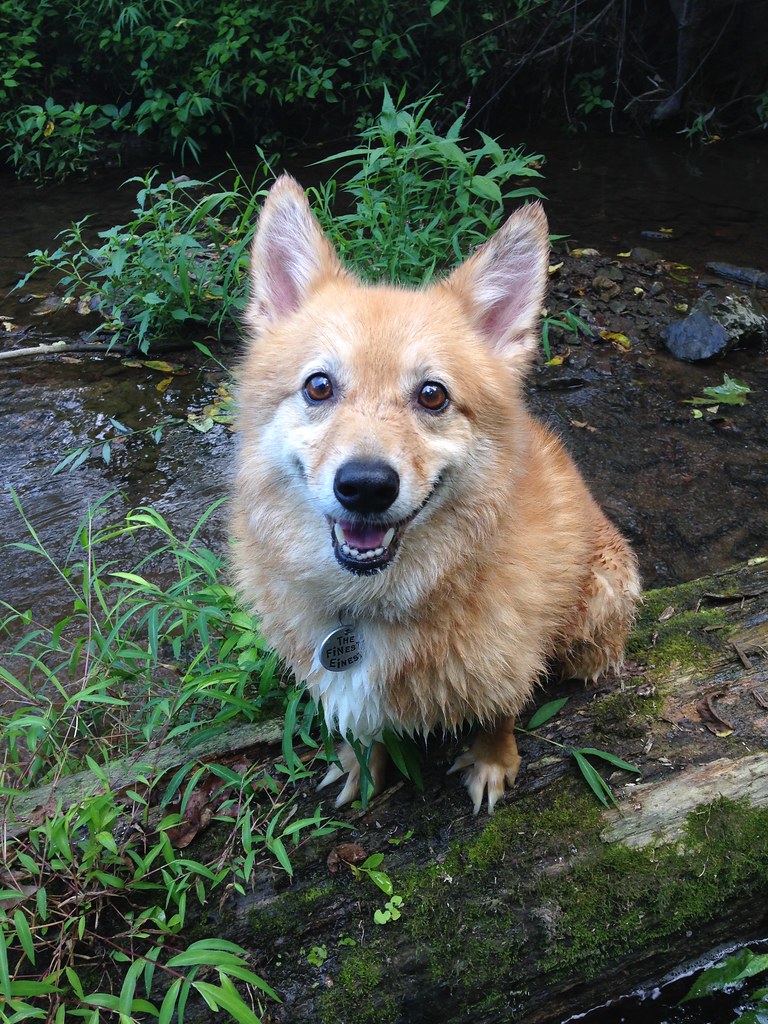 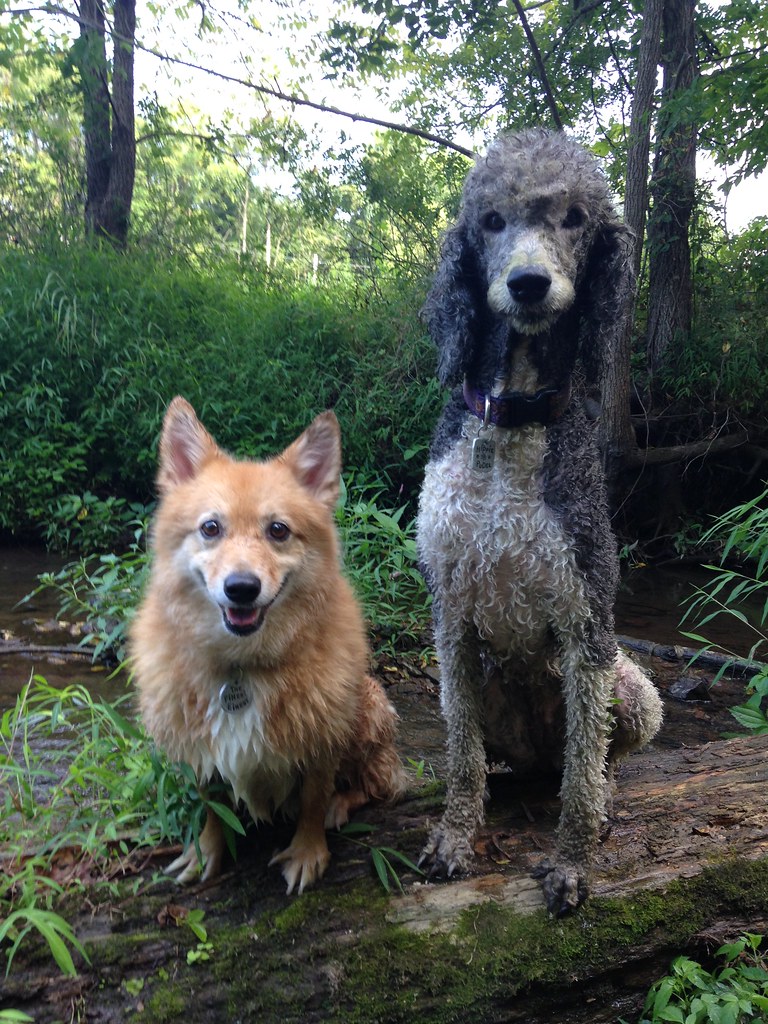 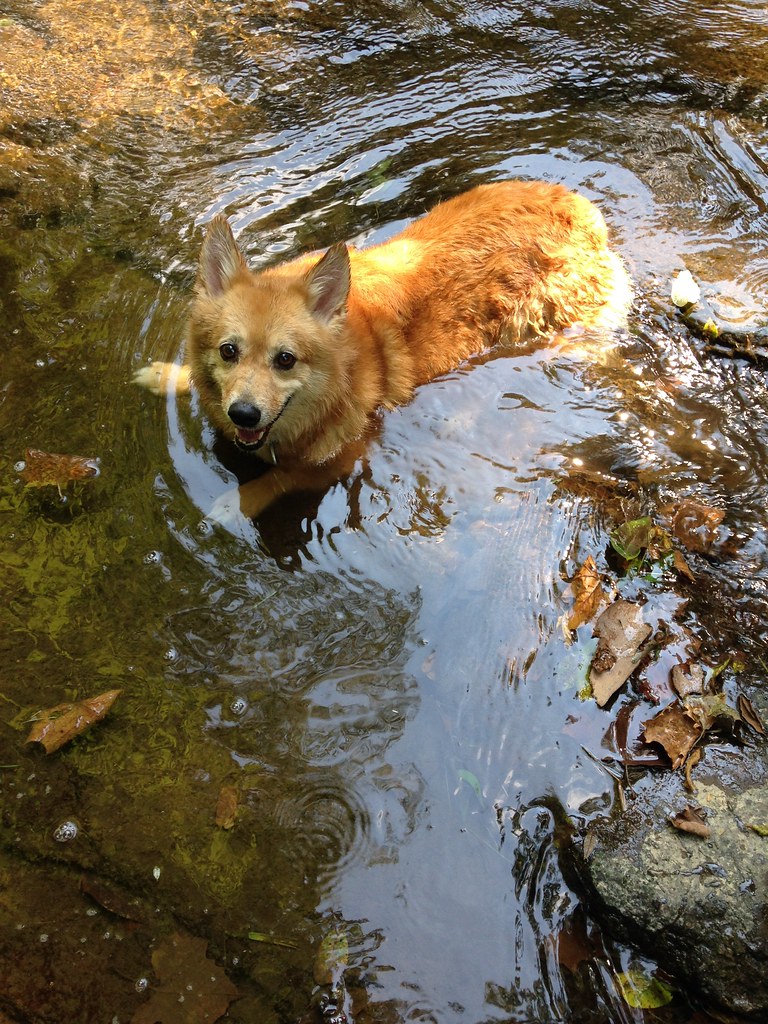 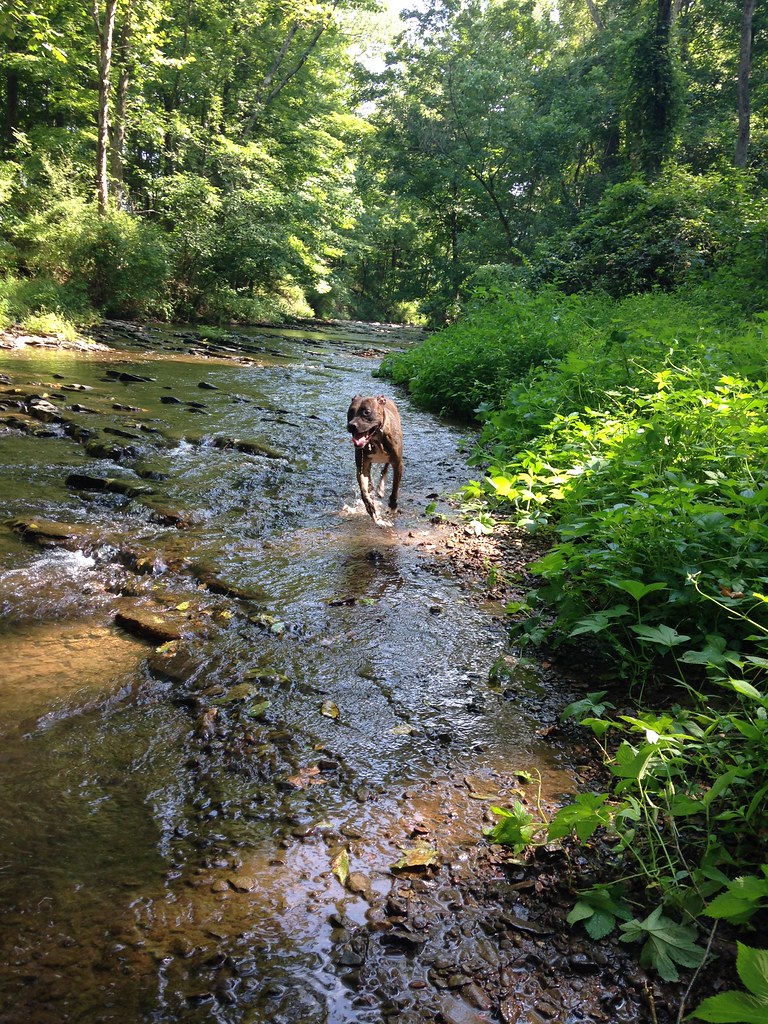 \
Group Picture.  As you can see, Perri is absolutely filthy and covered in every type of sticker, burr and twig.  It took me an hour and a half to comb them all out.  Then a bath.  And the next day, paw clip and face clip.  Whew.  I blow off how much work Perri's coat is as "really not that bad", because most of the time I really do not mind it.  But the stickers were insane!  Ein also got a bath and undercoat blow out with the force blower.  As usual, I produced another corgi from all the hair! 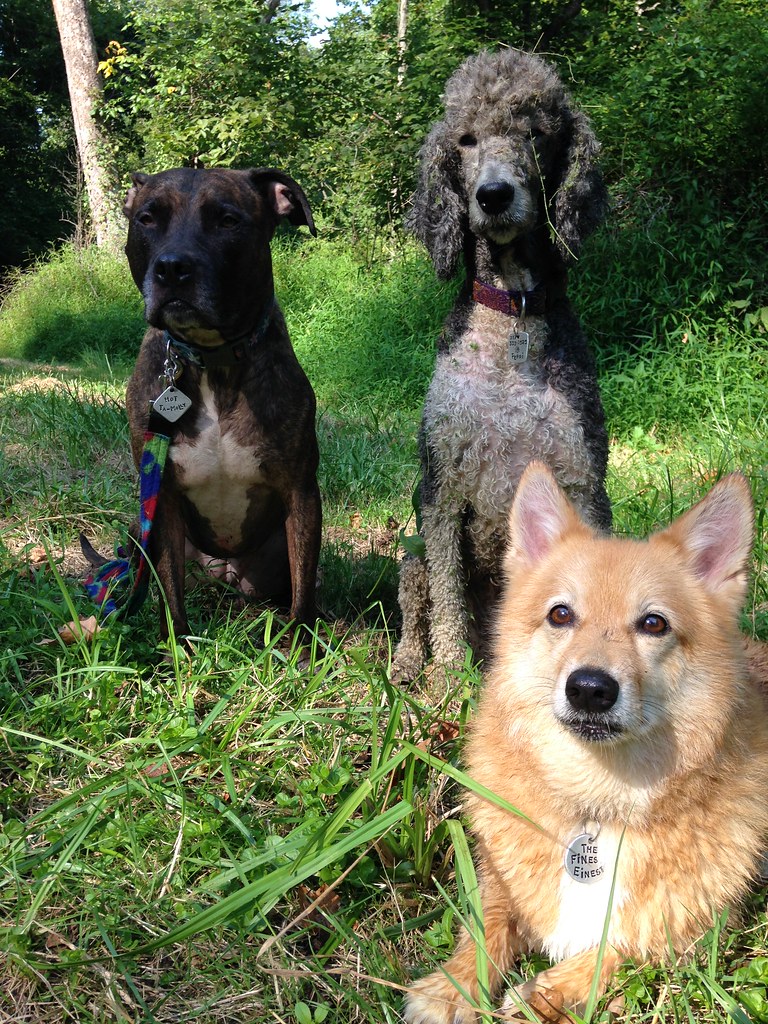 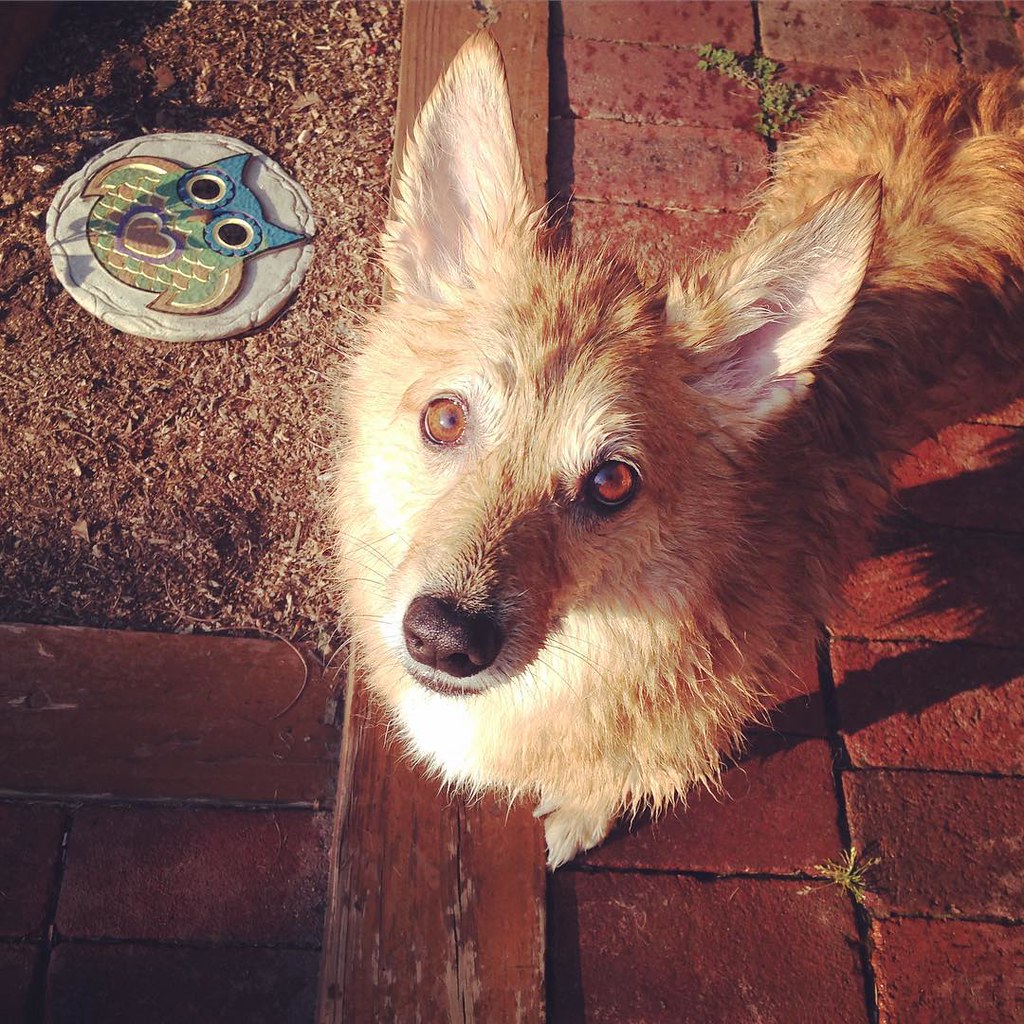