I usually run out of steam for USDAA by this time of the year (I tend to trial USDAA in May and again in July and then take a break until the following Spring.)  but I went ahead and entered the girls in one more summer trial.

P2 Jumpers was first Molly and we had a really nice run together.  I chickened out of a front cross and unfortunately, I should have done it to show Molly to decelerate and turn back to me instead of holding her line and taking an off course jump.  (So hard to explain without a map or video but bottom line: my lack of confidence cost us a Q!)  In any case I was loving how she was running with me, good Moo!

Perri did P1 Jumpers and was moving okay, but not flying as I know she can.  When we hit the 180 sequence in the course Perri ran wide and took a wrong course tunnel.  We still struggle with 180's and that is confusing to me, since Molly wrote the book on running jumps out and running wide, yet I am able to communicate what I want to her.  I do need to remember though that Perri is not as seasoned as Molly, and is certainly not as mentally sturdy.

Next was P1 Snooker for Perri.  I ran her off the start line and lost her to casual sniffing in front of the tire.  She then took the tire but visited a ring crew.  I thought the whole run would be a disaster of flat sad poodle but suddenly something clicked into place and Perri took off.  We flew through our opening except for one more visitation break (she landed from the last red jump literally right in front of the stewards table.   She could not resist.), but got back on track nicely and even did a beautiful 180 and we ran fast to the finish jump.   A Q with 39 points! (We did not finish the three obstacle 7 combo because we ran out of time.)

P1 Standard for both dogs.   They were the only two 20" dogs, they were back to back.  My friend held Perri for me in the crating area while I ran Molly.  I actually did a really decent job of focusing on the dog I had in the ring and not worrying about having to rush.  That's a step ahead for me!

Perri's run was...she was totally flat and lifeless.  This is a pathetic shadow of what Perri is capable of.  She moved at a crawl, she popped the weaves (I noticed, right at the sunny spot on the floor.), she absolutely refused to down on the table.   She would not do the chute and chose to visit ring crew instead when I asked her to repeat it, so I carried her off.  I do not feel that she saw this as a punishment, but...who knows.

Choices.   What are the right choices for Perri?  On the table, I am sure I was judged.  Or, maybe no one cared.  Or maybe they did.  Perri refused to lay down, she gave me her paw instead.  And I allowed her to continue running.  Should I have carried her off the table?  Maybe.  Should I have insisted that she lay down?  That would have been stupid.  I know that if Perri can do something that I ask of her, she will.  For some reason, she was too uncomfortable to lay down.  I know my dog.  Was I over facing Perri, asking her to lay down on a table?  I don't think so.  I have asked her to do this in the past, and she has.  She has always laid down faster than Molly, in fact.

There are so many choices.  The weight of them is unbearable.  This is Perri's third recent trial of flat and lifeless behavior.  We had some nice running in Snooker.  I am clinging to Perri's happy ring performances in AKC two weekends ago.   When you have a sensitive dog you are constantly demonized by questions.   Who am I doing this for?  Does she really enjoy this?  Am I supportive enough of her?  Would she be happier not trialing?

In better news...Molly and I were finally able to qualify in P1 Standard and earn her Performance Dog title!! (Performance I versatility title: requires three Standard Qs and one Q in each of the four games: Pairs Relay, Jumpers, Gamblers and Snooker.)   It only took three years!   Of course we don't do a whole lot of USDAA, and that whole Standard Curse of ours and all...  This felt like a pretty major landmark event in the trialing journey of Team Molly!

I honestly thought that we had NQd for being overtime, but we finished with four seconds under SCT to spare.  Whew.  I was majorly mentally obsessing that she would pop the weaves and run for the tunnel and she did just that.  Not really an amazing run but any Standard Q is a good thing! 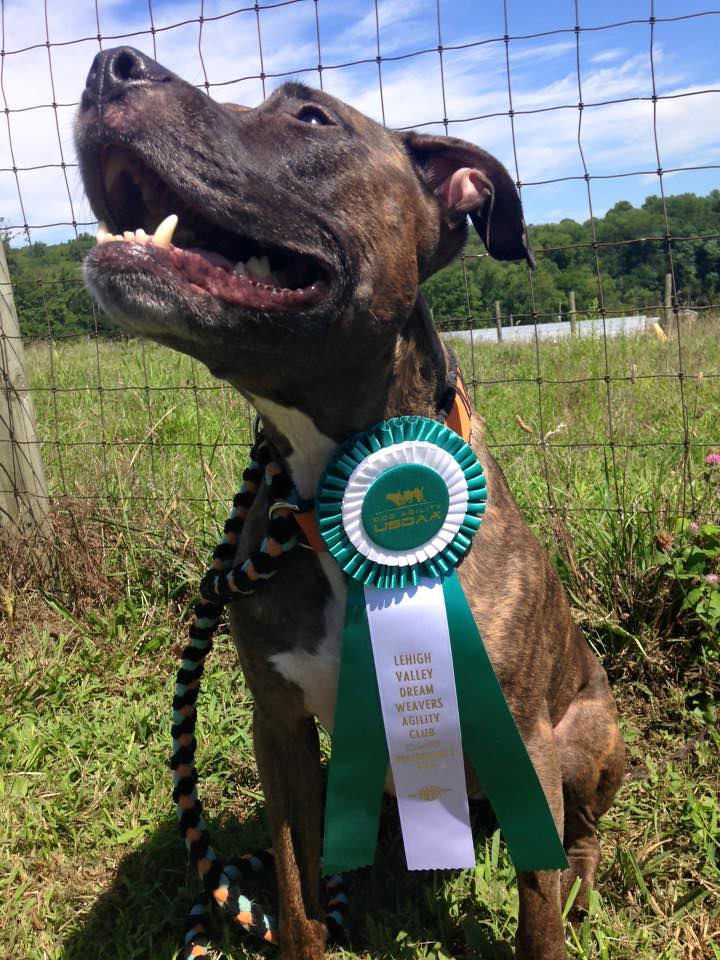 I had planned to continue trialing more USDAA in September.  But I realized that I simply love AKC the best.  When I have an AKC trial coming up, I am completely excited and looking forwards to it.  I'm just not at that place with USDAA.  I despise the "down" on the table, and am not consistent asking for it with my dogs.  Not fair to them to randomly ask for it (although until Saturday, they have been willing to do so.)  With Perri's chute problems, it is best for us to stay away from a longer chute until her confidence returns.  But the thing that I really dislike is the separation of the Championship and Performance class.  It makes the entire day draaaaaaaag along.  I know it would be clunky to remove and replace the spread jump and raise and lower the A-frame more but...surely it would be faster than running the classes separately all day. (Hey, UKI manages!)  Shrug.  That is just where I am at right now.  We are certainly not done in USDAA.  (Especially with winter coming and plenty of USDAA trials at the trial site within reasonable winter driving distance, and not so many AKC.)