Vince and I liked Promised Land State Park so much, we decided to return there for another camping trip.  It was planned last minute, so we did not have a choice of many campsites...we certainly did not get a site on the beautiful Pickerel Point Peninsula!   We camped this time in the Beechwood section of the Lower Lake Campground and it was a little more woodsy. 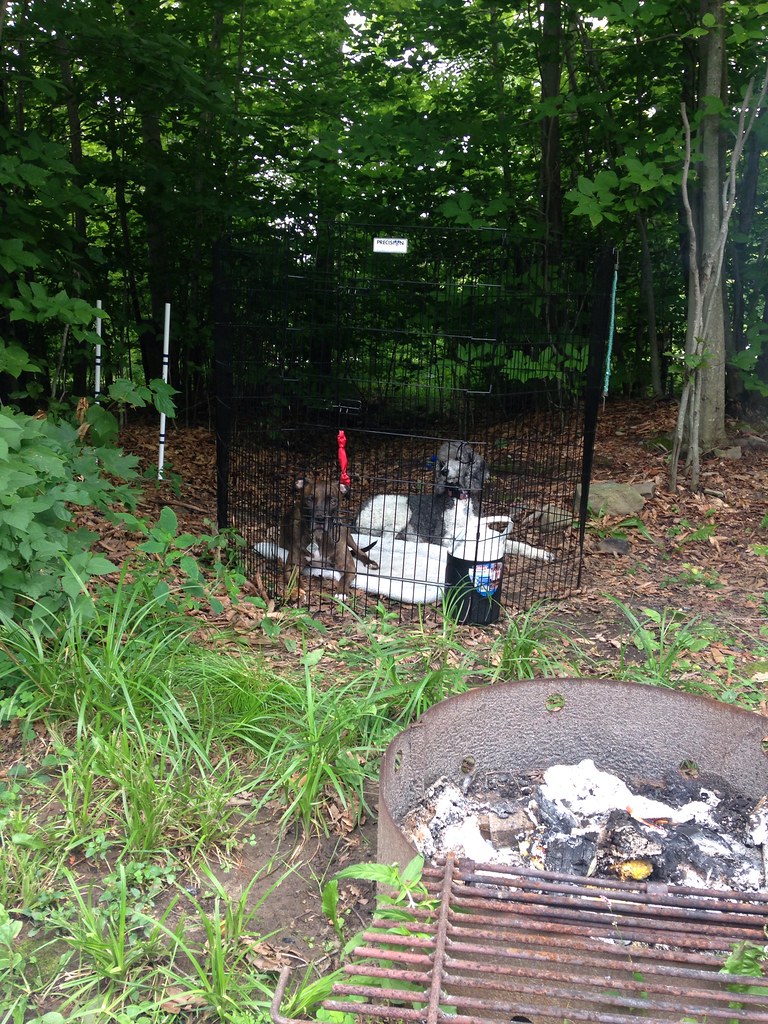 We actually arrived Saturday evening after the agility trial, so the rest of the day was spent setting up the camper and settling everybody in.  We did take a short walk down to the lake in the evening though before returning to the campfire.

Sunday morning I wanted to check out an Earthcache about 10 minutes north of the State Park, at Bruce Lake.  We parked at a trail head off of the main road and started a hike around Egypt Meadow Lake, all the way out to the glacial Bruce Lake.  The earthcache had GPS waypoints indicated along our hike, things for us to notice as well as information about how the area was formed by a glacier.  It was fun!


Perri back at the trail head.  It has become a real game with me to ask Perri to jump on top of Things.  And she absolutely loves it.  This was high for her!  I love watching her judge the distance, get ready and levitate upward.  This is confidence building for Perri, she always seems very proud of herself. 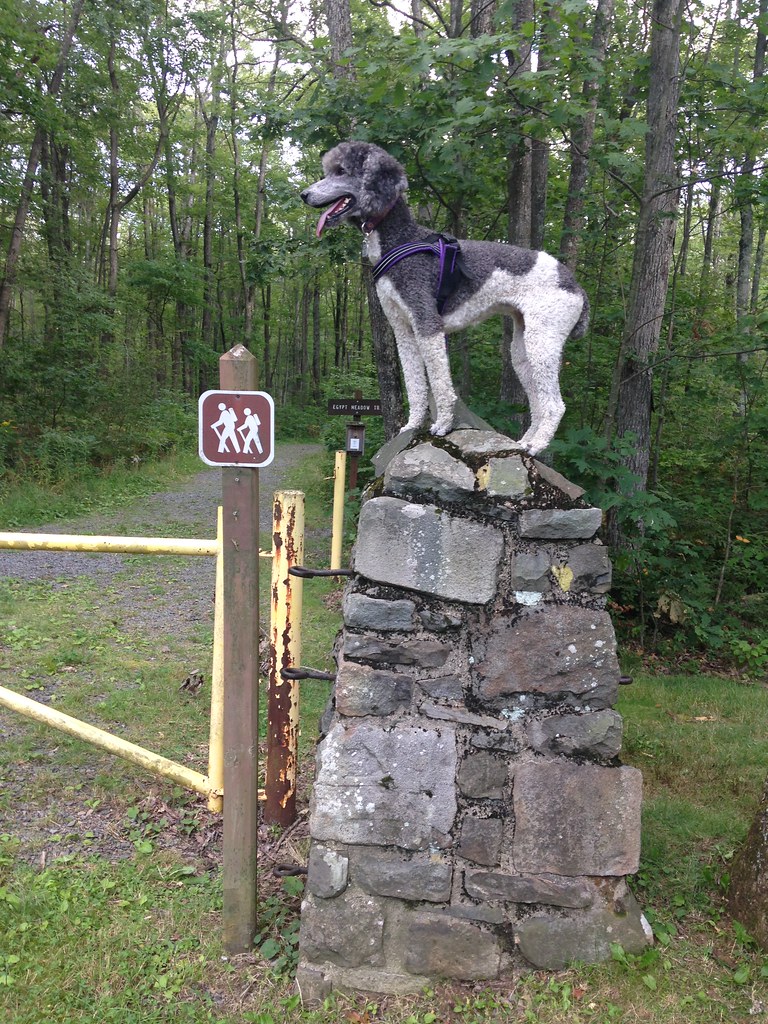 Back to the campsite for a few hours of reading and relaxing.   There were two more geocaches that I had not found in the park (three, actually.  But the third was on a small lake island accessible by kayak only.)  I took Perri alone for a little evening hike out to the other two.  They were hidden along the snowmobile trails.  Perri seemed tired but trotted along off leash doing her thing.

We finished our hike on the Falls trail.  Perri flopped into the stream with her tail wagging, it was a warm night and she was very happy to get wet in the water.  This trail is very popular with hikers in the park, but it was nearly dark so we only saw one couple out hiking.  We moved to the opposite side of the stream from them so Perri could continue to be off leash.   About halfway back she got the poodle sillies!  She started racing around me in circles, faster and faster, growling and huffing and barking at me.  She pounced, she found mud, she was filthy and so happy and wild.  I laughed and laughed at her and I loved her so very much in that moment.  I will never forget it.

Sunday I planned to explore the trails north of the campground for a little while.  I was going to take only Perri with me.  Molly gets a little pokey at this point in a camping trip, and I didn't want to push Ein physically.  But Molly seemed like she wanted to come along, and Ein was moving really nicely.  I was actually shocked at how well Ein was moving!  He was getting up nicely (not that agonizing dragging up of the hips.), he was moving well and not stumbling or crossing his rear legs.  His forelegs were not shaking.  I took him!   Me and all three dogs headed off for the Dam View Trail.

But first, an uncooperative family photo.  The girls did jump up on that rock, Ein did not! 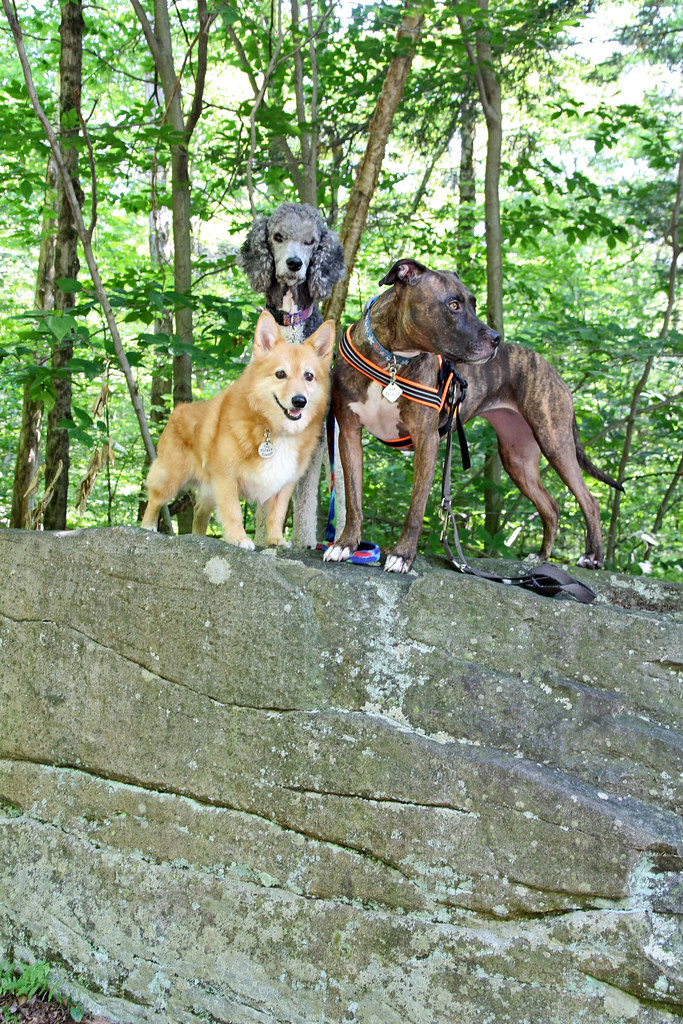 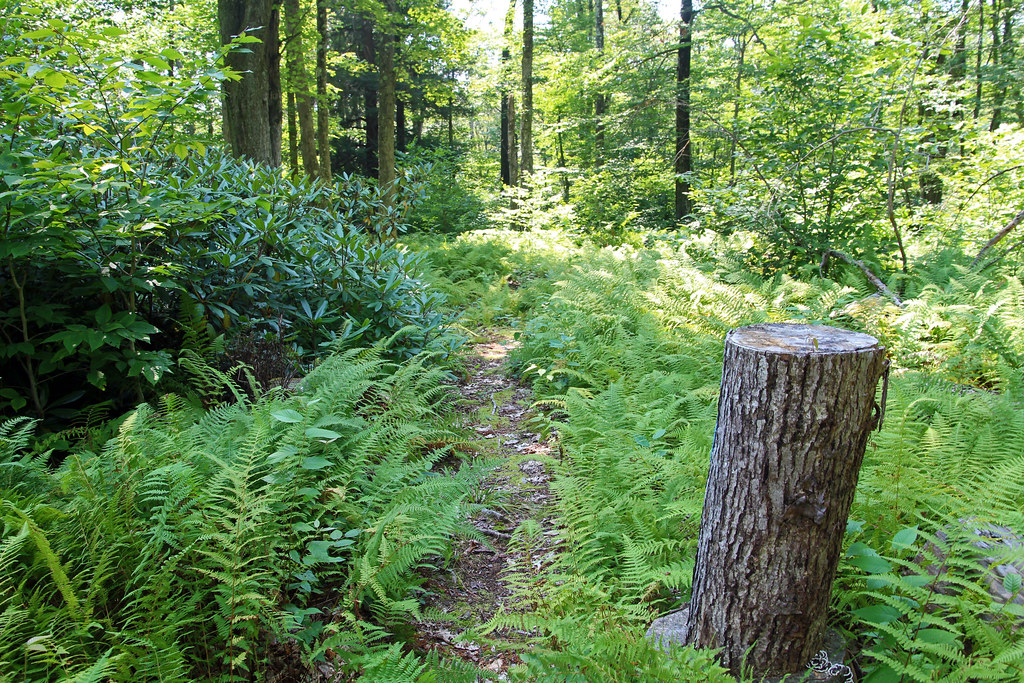 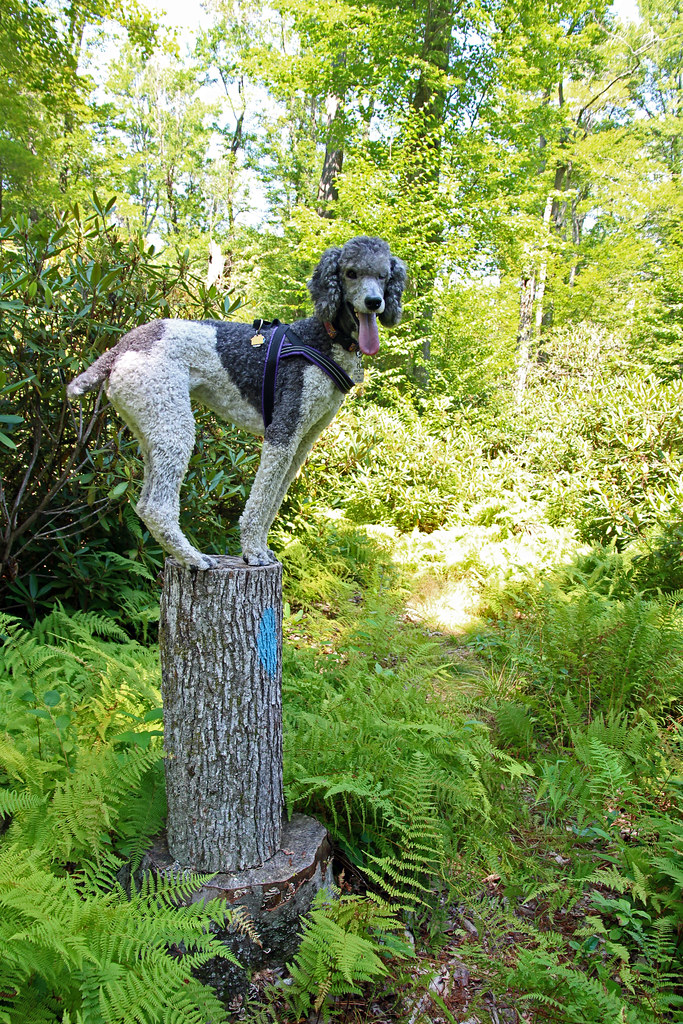 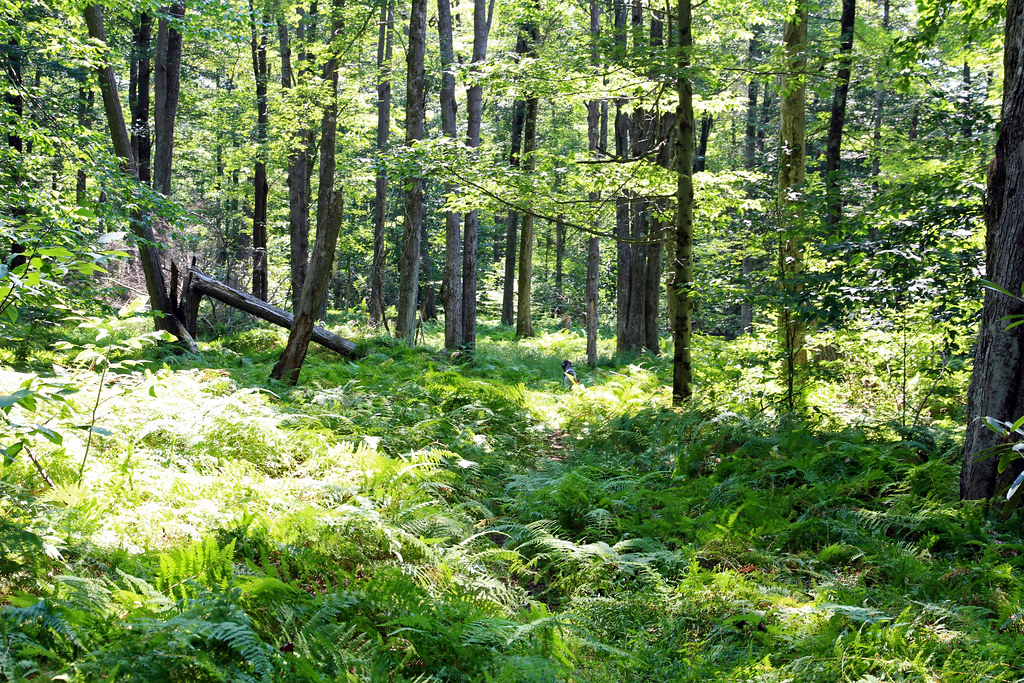 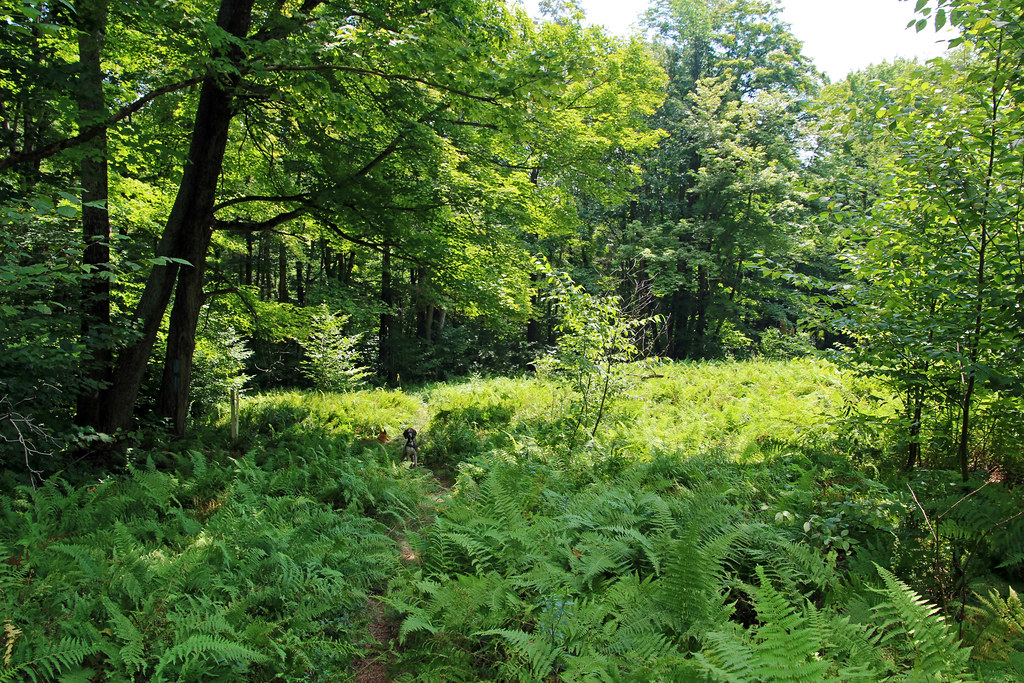 About right here, the trail map got confusing.  There was supposed to be a trail going right that would lead me to the "Song Dog trail" so that I could do a nice loop hike.  I could not find that trail, so I went straight down the hill thinking that that must have been the trail.  It was not.  I came to the Little Falls trail, downstream quite a way (Vince and I hiked up that far in May.)  I back tracked to the same spot that the above photo shows.  I went left into the woods, thinking the trail went in there.  There was no trail.  Finally I found that to the right there was indeed a horribly overgrown trail.

This is the stuff I do that nobody else does!  I pressed on for nearly a mile through barely passable brush, thorns and tree branches growing into the trail.  I noticed on the trail map that if you miss the turn off onto Song Dog from this connector trail, you can continue on the "Overlook Trail", straight off the map and on and on.  Not that I mind an adventure, but I like to have some idea of where I am at.... 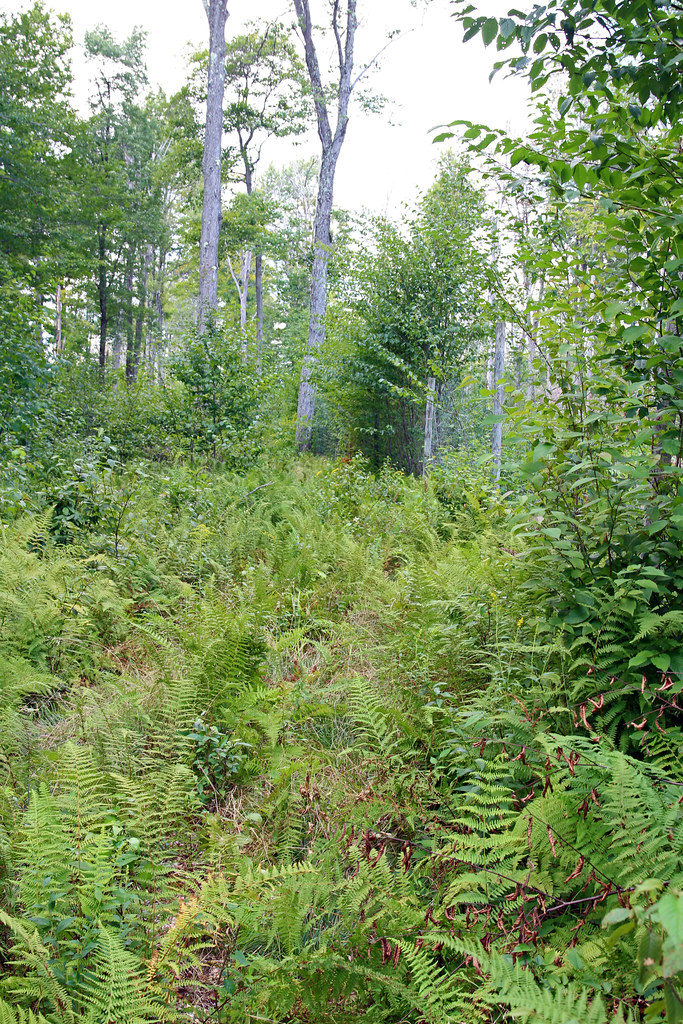 That was the "trail."  Ein pressed on ahead of us, small dog though he is, he confidently forged ahead through all the brush which was often over his head.  My heart swelled with pride to see my boy so strong after so many miles of hiking, and pushing through growth taller than he was as though it was nothing.  My boy, back owning the trail!   Perri was back on the leash, she got penalized for teasing the leashed Molly by spinning around and pouncing and driving Molly insane since she could not get free of her leash and chase.  I finally decided to have a Normal Person Sensible Moment and we turned around. 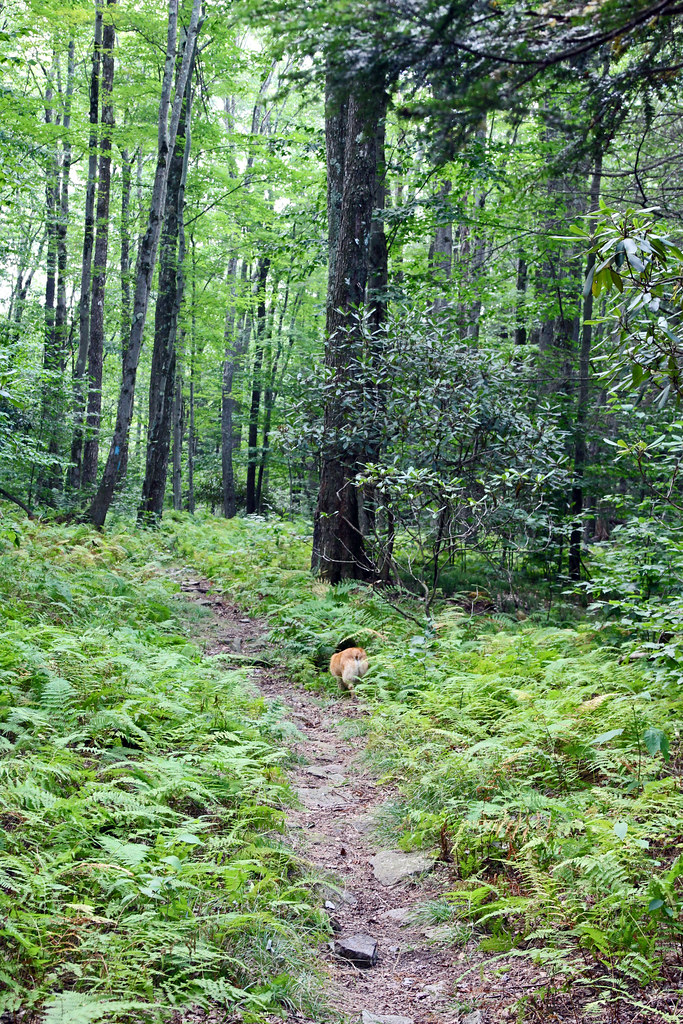 Once again we went down the hill and met the huge stream flowing from the waterfalls.  We followed the Little Falls trail back to the campground and a fine adventure was had! 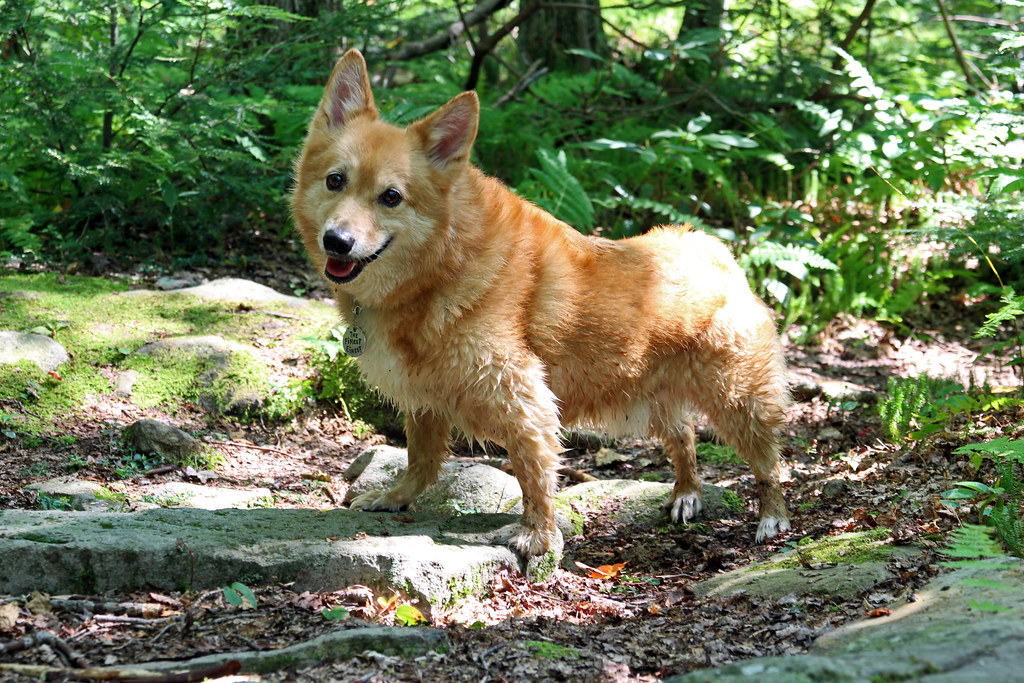 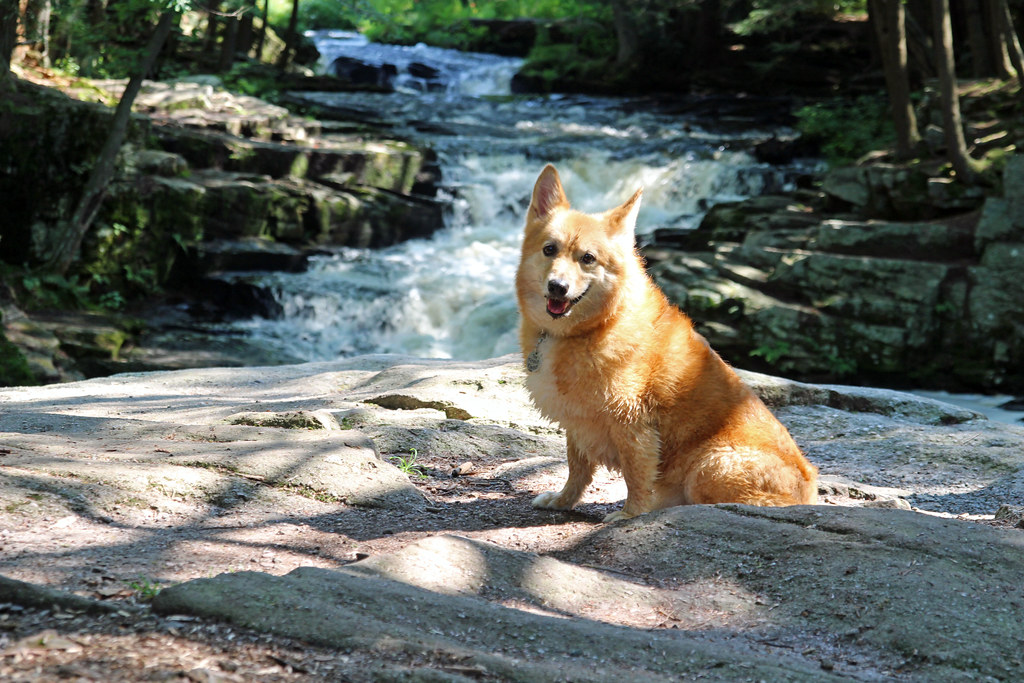 I am so proud of Ein.  So proud!  Last year I really did not think he could return to such long hikes.  He was a mess last year.  But he has slowly returned to his former strong self.  We work just a little bit almost every day on simple rear end strengthening exercises.  It takes us probably 30 seconds every day.  But we do it and it is making a difference.   And the Dasuquin has been amazing.  I kept thinking, "Ein will be worn out after this...he will have to rest for a while after this."

After last Sunday's creek walk I thought he might be too sore still to enjoy the camping trip.   After the walk between Egypt Meadow and Bruce Lake I thought that would be all for him on this camping trip, he would have to rest.  And I watched him on the Dam View hike and just could not believe that he just kept on going, as strong as ever.  No Rimadyl.  I even thought that after this camping trip Ein would not be able to come to the B Match at this coming Friday's agility trial but he is moving so good, still.  He is a fine, strong little red dog.


With the dogs all nice and tired, Vince and I went to the boat rental kiosk and rented a 2-man kayak.  Neither of us are very experienced and we had never kayaked together before!  My main motive was to get the little geocache hidden on the lake island, I will admit.  But kayaking is super fun even without a destination.  Sadly we were only on the lake half an hour before some surprise thunder rolled in and we had to return to shore.  We were invited to return another time with a coupon for a free hour rental. 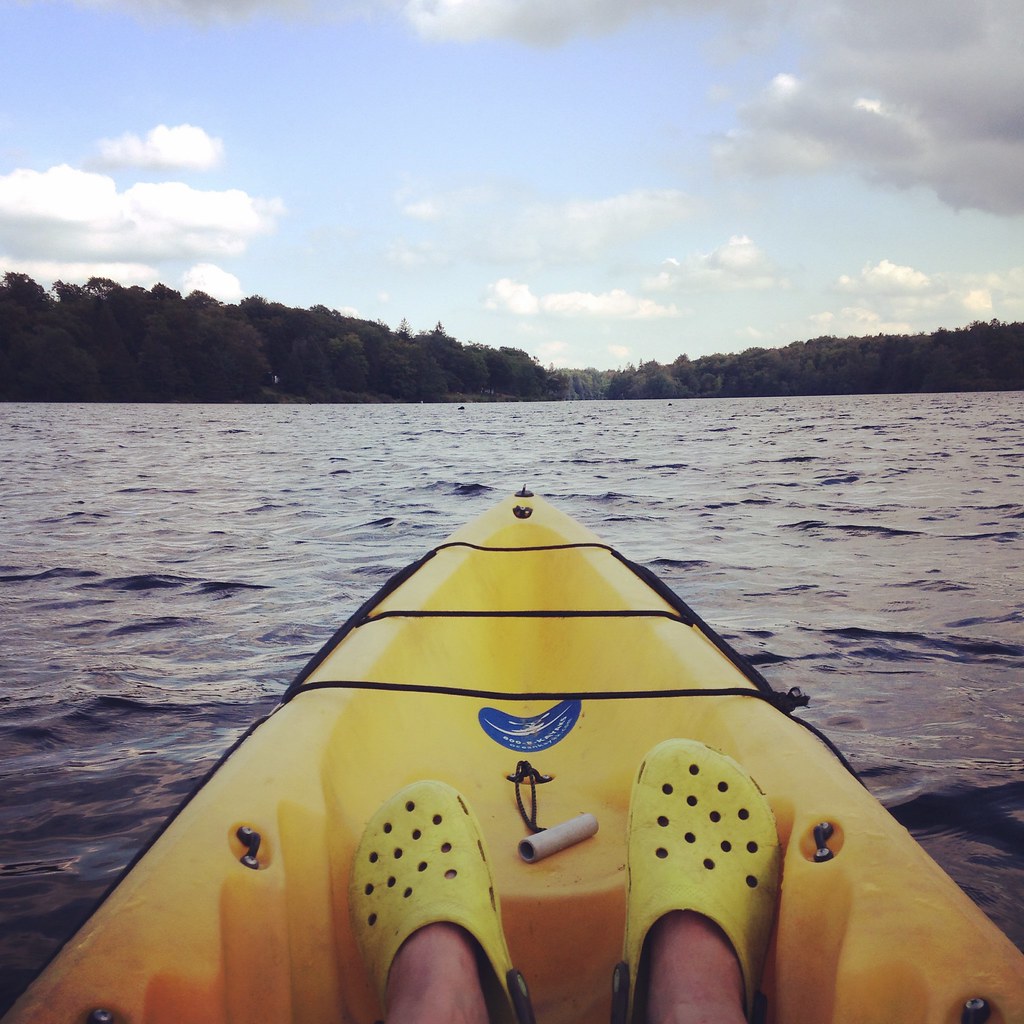 We returned on Tuesday to make good on our rental time and the day was even more beautiful!  I only took the GPS out with me , wasn't crazy about the idea of having my phone out on the water with me with the potential for getting it wet or dropping it in. (the above photo was from the day before.)  Rowing the kayak makes my arms sore!  We did manage to get out to the little secret island in plenty of time.  There were lots of pine trees everywhere with a nice bedding of needles on the ground and a fire ring in there.  What a cool place it would be to tent camp overnight!   Now we are full of talk of buying kayaks.  I would love to take Ein with me in his life vest and paddle around, he would love it.
Posted by dogbird daily at 7:39 PM