Saturday was my training club's outdoor agility demo at a very busy horse show!  I waffled back and forth mentally about which dogs to take.  No Molly.  Ein instead.  Molly is too crazy to handle horses, food stands, and the general public pressing against her.  Perri was a definite, she loves the energy of a crowd.  I changed my mind and decided to include Molly after all.  If she was totally over the top I could keep a leash on her and work on focus exercises at her pace.  No good would come from avoiding a situation that could be productive for her.   Ein stayed at home because his right hip looked a little sore to me, as any of his four legs can do without warning.

I helped load equipment at my club and then we took everything to the showgrounds to set up.   The ring gate turned out to be some very high snow fencing - which relaxed me immediately where Molly is concerned.  Molly has done outdoor agility trials with some success, but most agility competitors are a little more respectful of dog-space than the general public, simply because dogs are our world.  I mean, someone was walking a goat on a leash around the agility ring and checking out the demo.  That's hard for a Moo!


It was a hot day and the demo was about three hours total with a half hour break in there.  (It was 12-4 but we ended early.)  I ran both of my dogs quite a few times!   We started out with a numbered course but soon took the numbers away and just ran "freestyle".  The ring was small, 50x50!  I ended up running the girls Fullhouse style, which I enjoy.   There was a set of 6 weave poles, so I got lots of practice on handling the weaves properly, different entries for the girls, and behaving my mouth and body language.  I was surprised how hard they worked considering how hot it was!  Molly was a really good girl, she was completely focused in the ring!  Sure, I had summer sausage.  But I have found if either of my dogs is overwhelmed and cannot engage with me, I could have any treat in the world and it does not help us.  Engagement and focus is a mental muscle for them, I was proud of them for sticking with me on Saturday.  Perri did have one melt down flat-poodle run.  She was a good sport all day but on her second to last run (right before our break) she was slow, refused the weaves and peed in the ring.  I guess she told me!  During our break I found a hose by the horse stabling area and saturated both girls.  I ran Molly two or three times after that, and Perri only one time (confidence building run with tons of rewards and flowy lines, and some weaves thrown in.  She did great!)


Since we are doing two weekends of outdoor trials (Perri's first time!), it was really nice to have two dogs who wanted to work with me at this event.  They also behaved under the EZ-Up and stayed in the x-pen.  I swear they could upend that thing if they wanted to (even though it is heavy.), but they don't do it.  Even when Molly was completely frustrated and screeching because I had the nerve to take Perri for a potty break, she stayed in.  (Molly was a chattery mess when we arrived, I was happy that she came back to earth so well for me.)

I also got to practice taking agility photos, since the lighting was great.  My zoom lens is nowhere near high end, so it can't perform well indoors on moving subjects - but I do a decent job outdoors!  (Full photo set on Flickr here!) 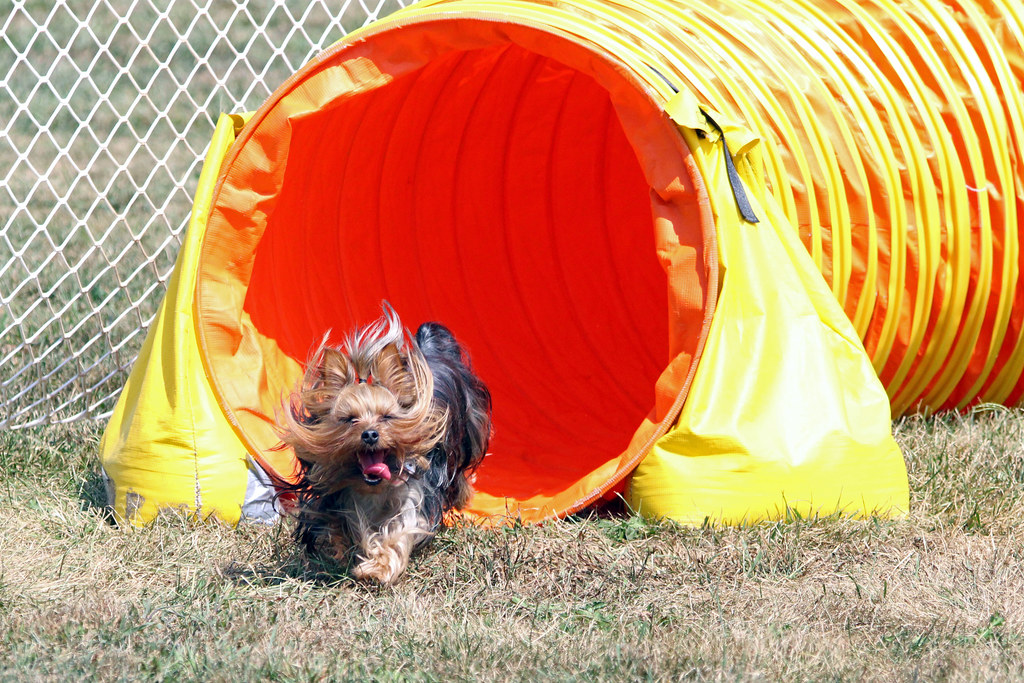 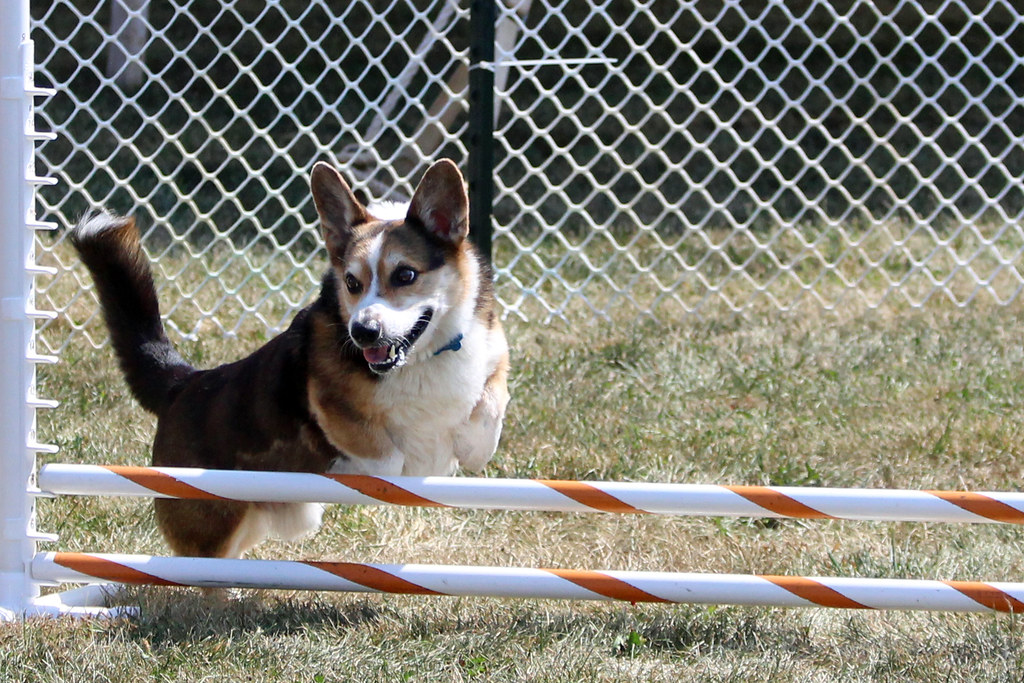 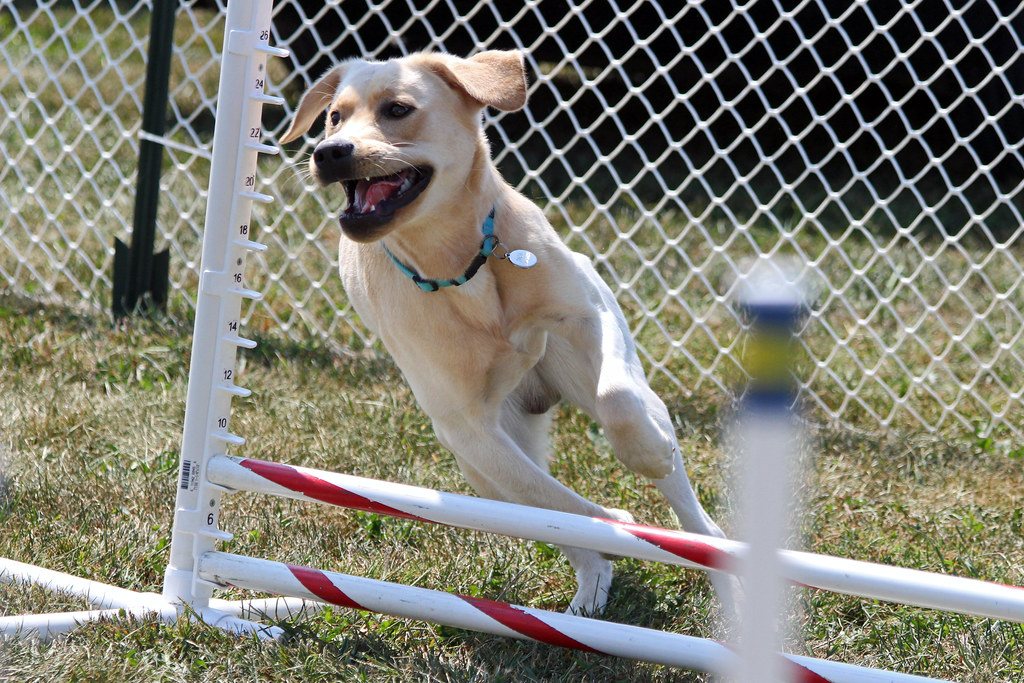 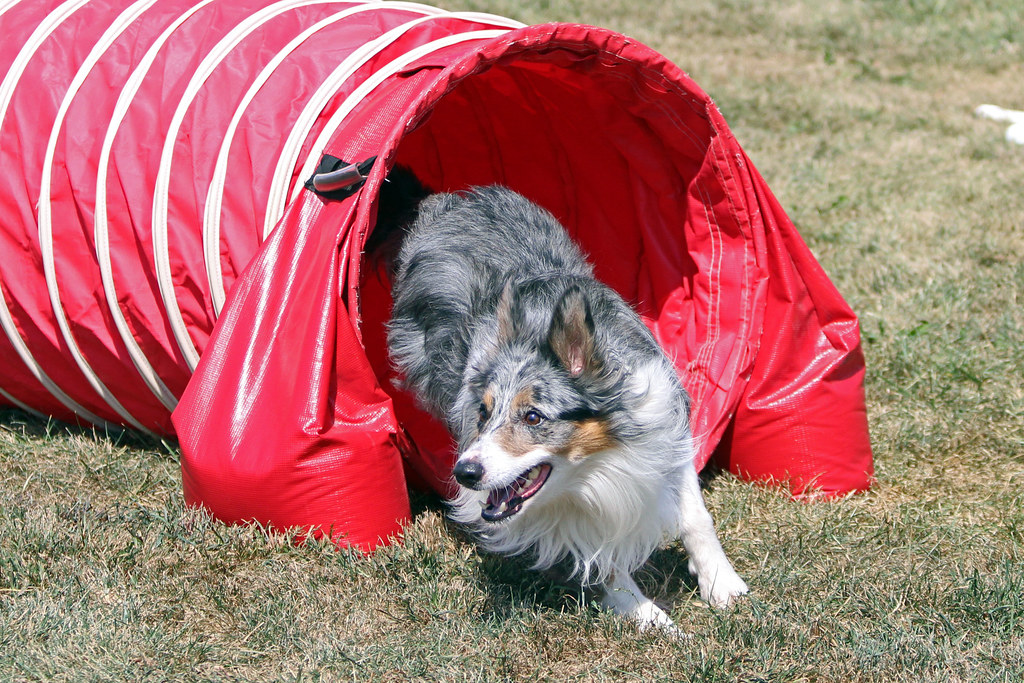 I had so much fun!  It was a little tricky to get a clear view to the dogs because the ring was so small, and there was no set course.  If you know the course, you can pick a few points in it that you know the dogs will be and you can get a good shot of them, but as it was I was all over the place.  It was very fun regardless.

Between my semi-good behavior in the ring on Saturday, and some intense review of the lecture materials in my FDSA Weave class, I am feeling another burst of optimism over the weave poles.  I have some new ideas, I have A Plan, I have had some personal success with "being good"...I don't feel like I have hit a wall anymore as I did last weekend.  So, we will see.  Stubborness goes a long way.
Posted by dogbird daily at 5:29 PM