Yesterday afternoon Ein and I hit the road to go to a Wednesday evening Cynosport Rally-O trial.  It was a hot day but I wanted to take him for a short hike before our trial.   I was on the fence about it, thinking it might be "too much".   We visited a rock called "Dinosaur Rock" since there was an Earthcache to log there.  Ein was hot and the one place we walked, there were blow downs everywhere and it was very physically demanding for him even though we were not out for more than 20-30 minutes.  I knew on the way back to the car that I had (again!) made a not so awesome decision. 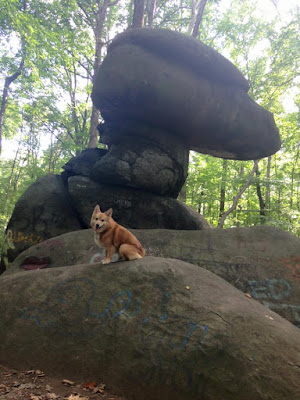 Ein qualified for his second ARCHEX QQ with 201's in Levels 2 and 3.  Level 3 we lost 5 points because I forgot to ask him to sit on the Recall Over Bar jump.   Otherwise he was sort of like the "old Ein".  He was worried, doing some staring.  I had to double-cue him on his Stand in Level 2 because he had zoned out staring at the spectators.  I felt a little sad that he wasn't as happy in the ring as he was for our August trial.   But I also have to remember that the 90-plus degree hike sapped his energy, and also that this was a new location by appearances for him.   We have trialed at this location many times, but the rally obedience trial was held in the newly added crating room (yay air conditioning!), and that was new for Ein.

On the Rally-O subject, Ein finally had a break through with his directed retrieve training tonight!  We have been stuck on a calm hold!  I mix in our hold work with pick up work (that is going very well!).  Ein has a hard time not being frenzied and tonguing the bar and moments of calmness are hard to find for clicks.   I have been clicking any mouth contact with the dumbbell if he is looking at me, even if it is not a solid bite, a compromise!  As well as biting the bar if my palm is underneath his chin.   Alternating, being patient...tonight for some reason he bit that bar and stared at my eyes, tooth contact was firm and he was very calm.  Jackpot!!!!   I was delighted when he did it two more times and ended our session!  I think he is catching on.

Thankfully the bonus last night was the sign where the dog is called to front and asked to back up three steps.  Ein did that well, and actually backed up three steps in a straight line!  (He used to curve off to one side or the other.)  If it had been the retrieve we would have done the old "fetch the ball and drop it on the return" that we always earn 5 points for (but not 10!).
Posted by dogbird daily at 4:33 PM