Molly and I are once again at a stand still with our weave pole progress.   I am trying my hardest to not micromanage her entries and not throw stress behaviors her way, but still the slow crawling weaves persist.  We are having good moments.   Moments where she picks up in the last 4-6 poles.   She is staying in more consistently than ever before.  But she is not the powerhouse that I know she is capable of, not ever.  And we have not been practicing much because: I'm a little sad about it and felt like we've hit a wall.   Nonsense.

I want to train distance to Molly's weave poles.  Because I think, hope, that if we challenge her understanding and performance of weave poles to the maximum...that both of our confidence will grow at trials. Overtrain it.  I am hoping so much that this is the missing puzzle piece for Molly.  I feel like we have an excellent understanding of independent entries and performing the poles no matter what, but something is still missing. 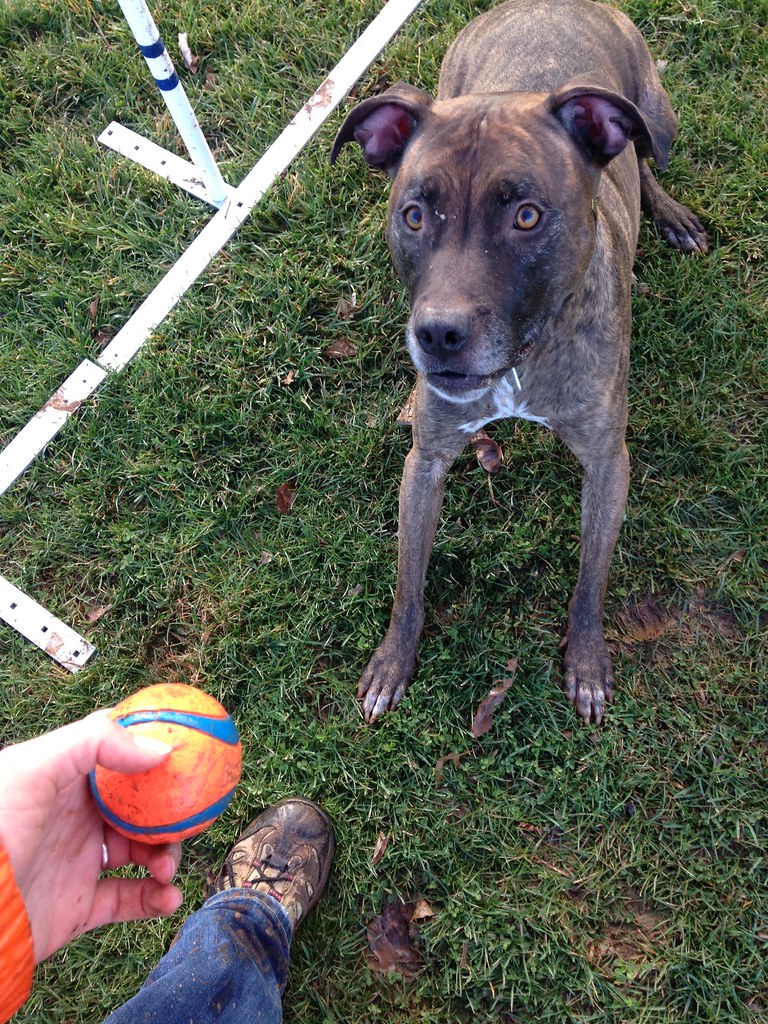 We went to the park, because we cannot do distance anything in our yard at home beyond foundation work.  For Molly's motivator we are going straight for the ball.  I have not done much weave work with Molly's ball because she gets so high and over the top, so rude and unfocused, that I never felt like we could get a productive session with it.  When we took our weave class on FDSA, the instructor told me that using the ball is probably exactly what we needed to do.  So, I started with Weave 101 with the 2x2 and set up 6 poles varying between straight and channel.   Zero issues.   Drove ahead even when she could have turned out of the weaves to try to get her ball early.  I wanted to start on familiar ground for her.

I decided to start our distance work today.  When I did this in the past, I used her command "Out, Poles." to send her to the poles, at least 6 of them.   It was never a problem and she was willing to do it, and quite well.   We need something more.   I used just the 2x2 and her ball and she was cranked.   She was jumping on me, air snapping, shark eyes, totally insane.  I held her collar and she kept trying to spin me around and lunge at the ball.   When that wasn't successful for her she started checking her environment in half second intervals, totally frustrated that I wouldn't throw the ball.   It wasn't long before she saw the 2x2.   When she would look at it I would say "yes" and release her collar.  Initially she turned on me and jumped all over me and tried to steal the ball from me.   I was being so unfair to require behaviors of her for her ball!* (Molly understands to enter the 2x2 if we are close to it, maybe 5 feet.   Challenging her to think and seek it at a small distance was something very new for her.) 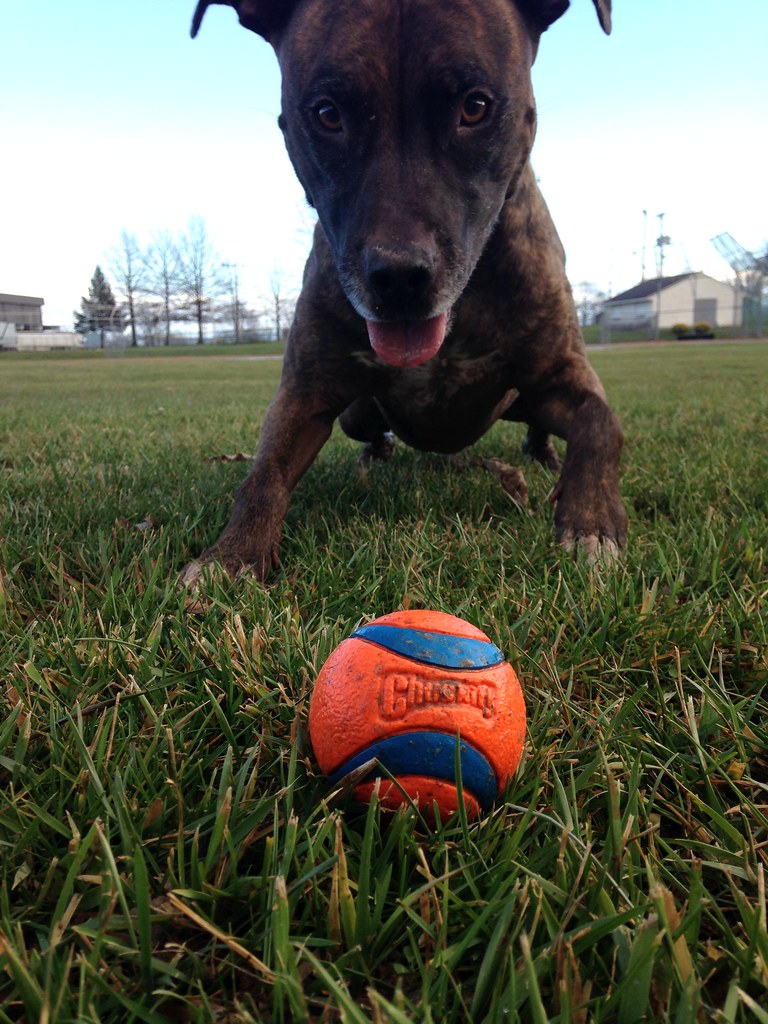 But eventually she got the idea.   I would say "yes" and release the collar and she was to go out to the 2x2 and then her ball would be thrown.   I gave her many bonus throws for returning the ball to me and for being a good girl.  We had a really good time out there and I felt like Molly had a lot of success.  It was really refreshing and empowering to work on a new challenge.

These were new factors: extremely high arousal (in non professional terms, lunatic asshole raptor mode.) from using the ball as motivator.  Molly had to sight the weave "entry" from a distance (we did about...10-15 feet today.  I tried more distance on one rep and that was too much for her.  No rush, we can increase the distance soon enough.)  I specifically used no cues today, I need Molly to see her entrance independently of my cues, help or body language and want to get to it.   I need that mental association (weave entry = BALL!)  to happen in her brain.  The ball helps to scramble her thought process and it is doing it's job.   When she is working for food she knows: "We are here to train and I am going to do x-task for that food." She is too focused and not stressed enough, the ball can change that for us.

We were both a muddy mess by the time we were done, and so were the versaweaves.  My favorite moment of today, and I ended our training session on it, was that when Molly returned to me with her ball, she chose to veer off her path, enter the 2x2 and do a mini-weave even with the ball in her mouth.  Even when she knows that a reward isn't coming.  So cute, so Molly.   It is okay if I can't train every day, or even every other day with Molly.   But I've got to make once a week happen.   That's not so bad, that's not so much.   And it's better than nothing. 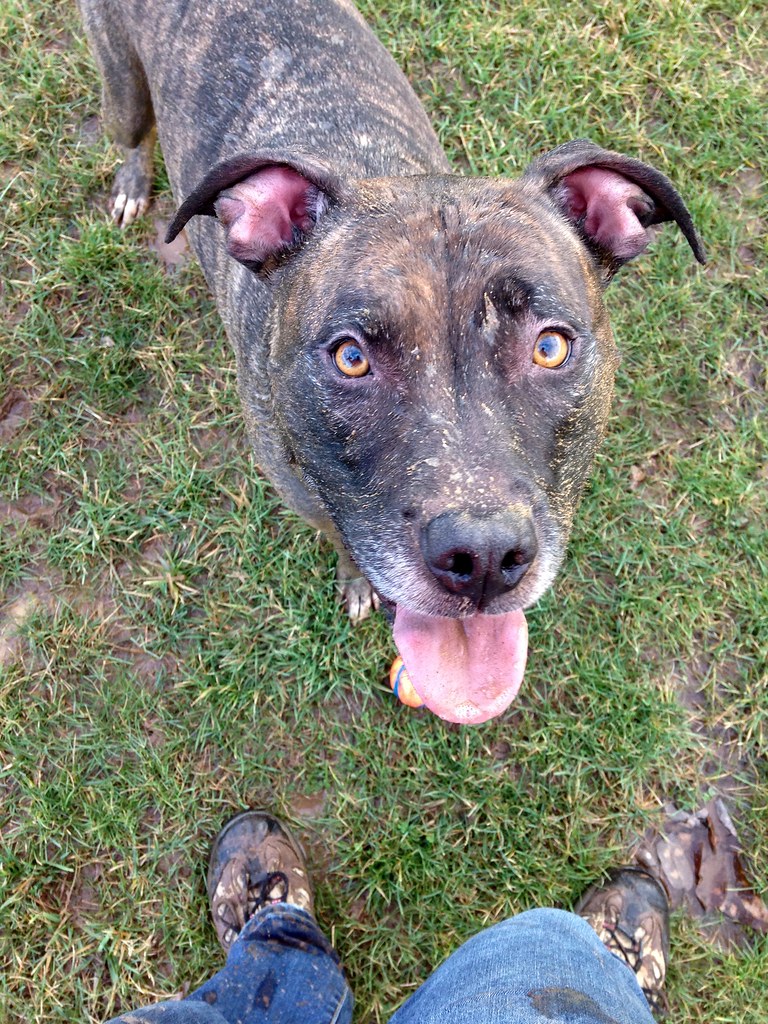 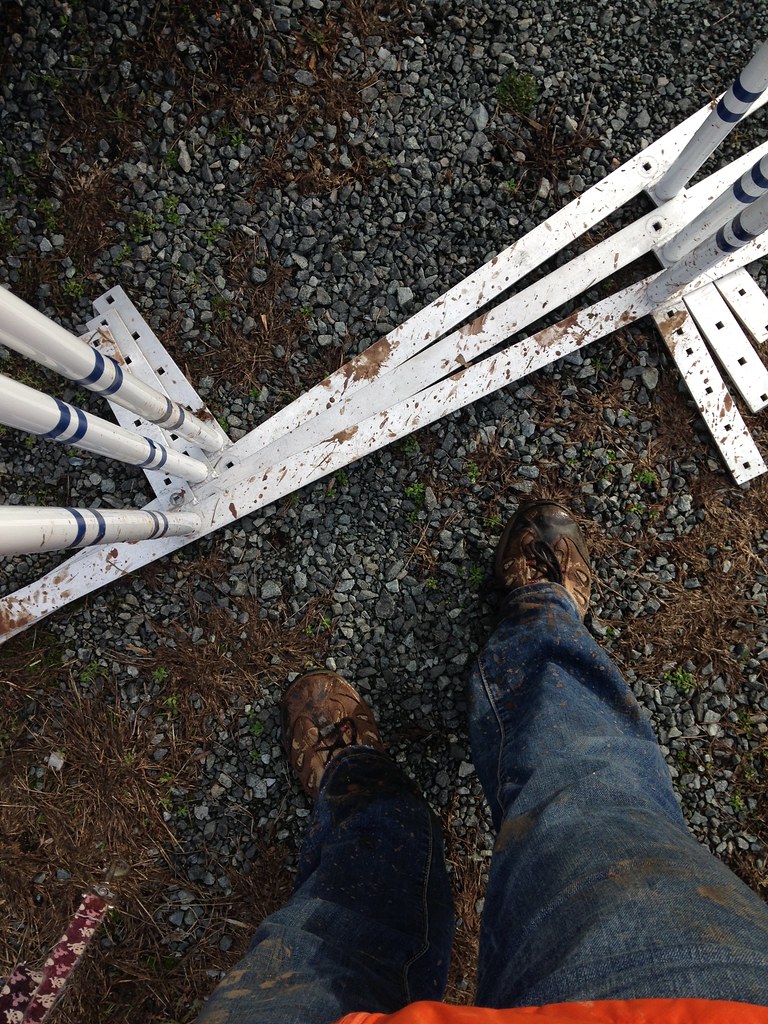 *You may think reading this that I have not done an ounce of impulse control regarding Molly and the ball, but.  I have.   A lot.  She just forgets each time and I have to be very consistent and maintain my criteria no matter what.   Come hell or high water, come bloodshed or head buttings.
Posted by dogbird daily at 3:18 PM