Ein and I made our AKC Obedience debut in Novice A class both Friday and today.   I was feeling a little nervous so I made myself watch our best rally-o video (from August of 2015) to remind myself of how beautiful our team work can be, and I put my favorite photo of us heeling onto my phone wallpaper.   Whatever works!

Friday the heel on lead felt good to me but we did lose some points for wide heeling.   The Figure 8 Ein noticed the one person in the post and worried about her, he even left heel position for a few steps to sniff her leg!   Oops!   But overall, kept with me and worked well.   Stand for Exam was flawless!   I don't think I breathed the entire exercise but my boy stood there solid as a rock, like we have worked on all this time.   Heel free felt worrisome to me, Ein was getting more stressy and noticing people outside of the ring more by that point - but when I asked the judge to go over our score sheet we actually earned more points in the heel free.   The recall Ein anticipated the finish and went to heel position but then realized that wasn't where he should be so he just sort of made up the difference halfway in between and grinned up at me.   Scamp!   I asked him to finish when the judge commanded but I accidently did both a hand signal and a verbal - I was stressed and I forgot myself!   I did not even realize it until me and the judge reviewed our sheet, so it was really valuable for her to go over that with me.  Our score was 185.5 - points lost for wide heeling, figure 8 stressing, one missed sit on the heel free, two points for my finish oops, and points lost for no front.  I was thrilled! 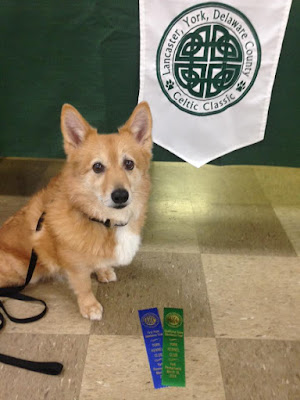 Today started off with a bang when I thought the briefing was at 8:30am...and that was actually when the ring started.  And we were the first dog!   I arrived at 8:18!!!!!  And Ein had to poop!  We made it ringside by 8:27 and into the ring we went.
Heel on lead was much smoother than the day before.   Figure 8 I made extra effort to keep him engaged and not worrying over the stewards and we did much better with only one person-sniff, though there was some google-eyeing and lagging and one missed sit at the end (with a big grin up at me and a tail wag!   The judge could not help but remark on how very very cute he is.  I agree!)   Stand for Exam - rockstar!   This judge had a sweater on but she was very careful to gather it and hold onto it so it would not hang in the dogs face.  Awesome!  Much appreciated!    Heel free was good with some wide heeling but all around great attention and enthusiasm.  Recall he missed is front again but this time I gave only a hand signal for our finish.  Score of 186!

Oh, group stays on both days were totally fine.   Talk about nerve wracking though!   I counted in my head because what else could I do?   I saw Ein looking at things around the room at times and I felt like I should glance at what he was noticing and acknowledge to him that I saw it - isn't that funny?  But it felt like it would be important to him.   On the second day the dogs were lined up with their backs to the Rally Excellent ring so that was a bit of a challenge.   Ein handled that well but it still made me nervous, I was glad that there was not too much commotion!

These last two days were golden.   Beautiful and unbelievable.   I am so humbled by my dog and so grateful to him.   AKC Novice Obedience was one of those things that I truly accepted we could never do.  Until we could.  Until we did.
Posted by dogbird daily at 7:36 PM