Ein and I have enjoyed two outings on the kayak since I bought it!

Our first trip was to Green Lane Park.   The lake is pretty large and I was excited to have our "maiden voyage" there.   I soon discovered Regulations.   The largest part of the lake is closed to all watercraft except what can be rented at the park.   In short: no using their lake unless you pay them money to do so.   The park does have a much smaller lake, "Deep Creek Lake" available for personal boats.   Ein and I made our way there!

I pulled into the put in ramp but noticed "no parking" signs everywhere.  Just as soon as I arrive some guy pulled in with an enormous truck trailering about 10 canoes and several kayaks.   This guy was no amateur!   He backed up to the dock and started unloading his boats at lightning speed.   He was kind enough to explain to me where the parking area was, that I could drop my kayak, go park and return.   I put in on the wrong side of the dock.   The very muddy, wrong side of the dock.

Our kayak was quickly anointed with a large amount of muddy water but we were off!   Ein was between my legs with front feet perched above the seat area.   Until he moved a little bit!   That made the kayak wobble a little, which made Ein panic, which made the entire kayak become very very wobbly and capsize-y!   I grabbed Ein and held him still and our world stopped moving.   I tucked Ein down below the lip of the seat area so that he could just sit there and not have to balance so much.  I paddled to the other side of the tiny lake and we departed.   Whew, two minutes in the water and we needed to regroup!   Between the mud and mess and kayak-wobbling, I was starting to feel that I had made a terrible overambitious mistake with the whole situation - we didn't enjoy this at all!  Landing across the lake ended up being a bad idea because now Ein was muddy, I was even muddier since I had chosen a quicksand-esque deep muddy area to land at.   It took me 10 minutes to get coordinated enough to launch back out with minimal mud spray!   Following that I arranged Ein in his sit position and we paddled around the tiny lake for a bit longer before going ashore.  We saw a painter turtle pop its head up.   Our first kayak adventure complete! 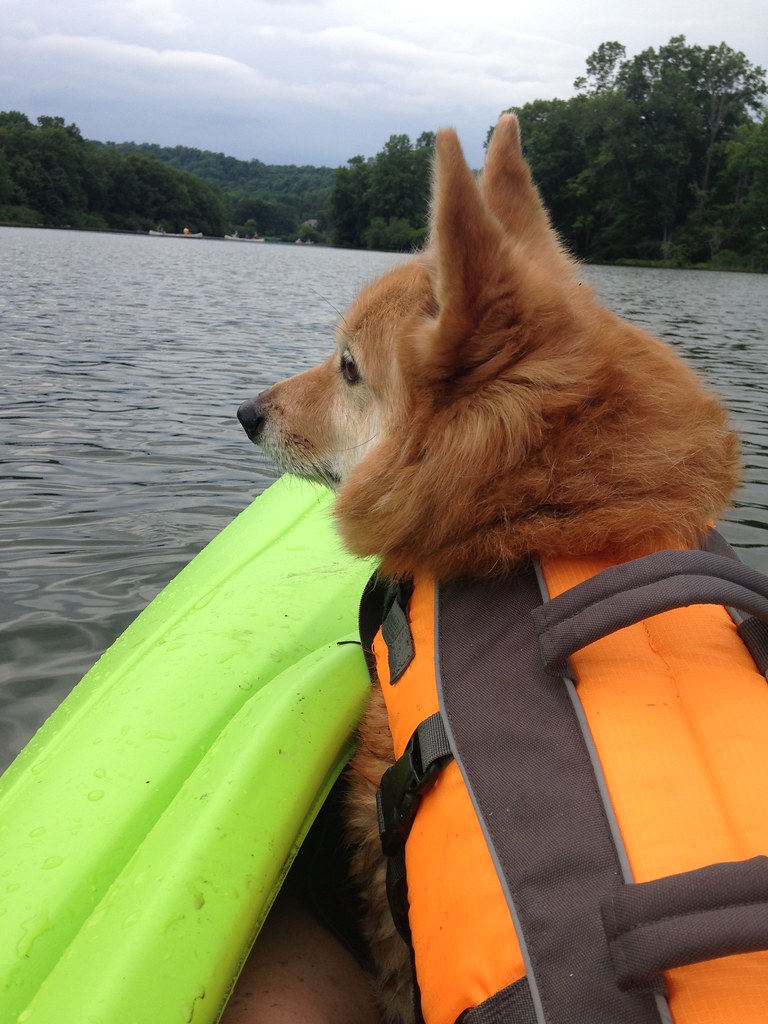 After we were finished of course I discovered the very not-muddy clear water gravel entry side of the dock.   The more you know!  Since I had to load the kayak back into my car, I had a stack of towels as well as a tarp to swaddle it in.   I wiped all of the mud off and practiced the fine art of arranging the kayak just-so inside of my little Honda. 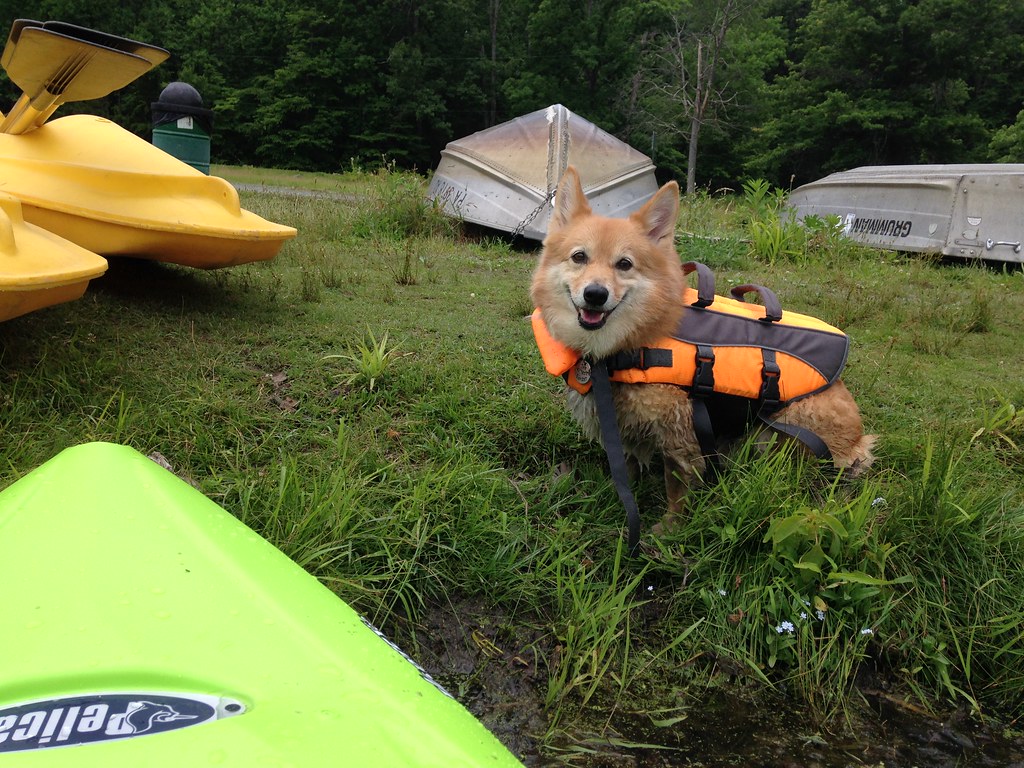 Our second adventure was just last week at French Creek State Park.  We went to Hopewell Lake and there were lots of other kayakers there.   Our PA Fish and Game Comission license stickers allowed us to use the state park lake.   No mud this time, I pulled up close and unloaded the kayak.   Ein and I were off onto the lake with no hesitation this time around.   The lake was so blue and much bigger than the Deep Creek lake.   There were lots of people out enjoying the beautiful evening, both on the lake and on the sides. 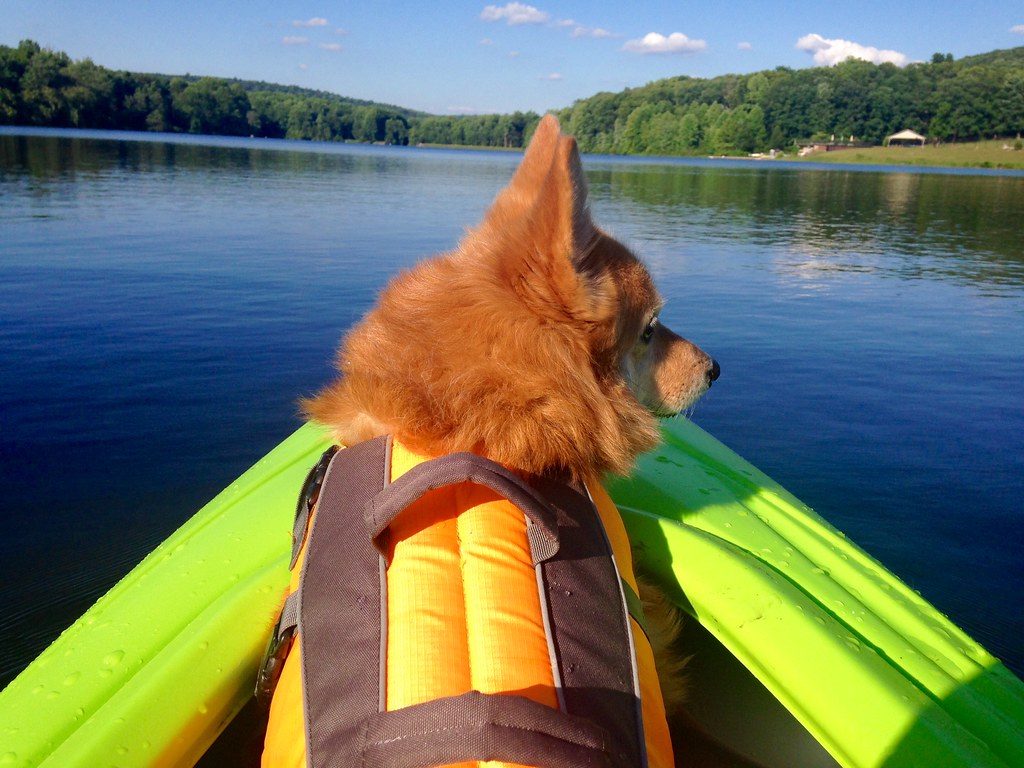 We paddled out all the way as far as we could go.  While the lake is still water, it still felt like we were going against a current.   Ein was as calm as could be.   When we turned around to return to shore the evening sun was harsh in our eyes.   I understood what was happening but it scared Ein a little and he fidgeted.   I stopped paddling and let us float and comforted him and he soon calmed down.   We found lily pads to paddle through, and I love the sound of them hitting the bottom of the boat.   And at one point I did not want to return to shore, I just wanted to sit on the lake with my best boy and enjoy the moment.   There were birds skimming the lake surface for bugs.   We saw some fish flop up to the surface and then disappear quickly.   Ein was panting from the hot sun laying on him, so I cupped lake water in my hand and he lapped it up.  I repeated this about 10 or 12 times until he was no longer thirsty.   We went and explored an off shore island (I would love to hide a paddle-only geocache.) but there were "No Trespassing" signs posted on the island.  The current seemed to be in our favor for the return, and paddling was simple on the way back. 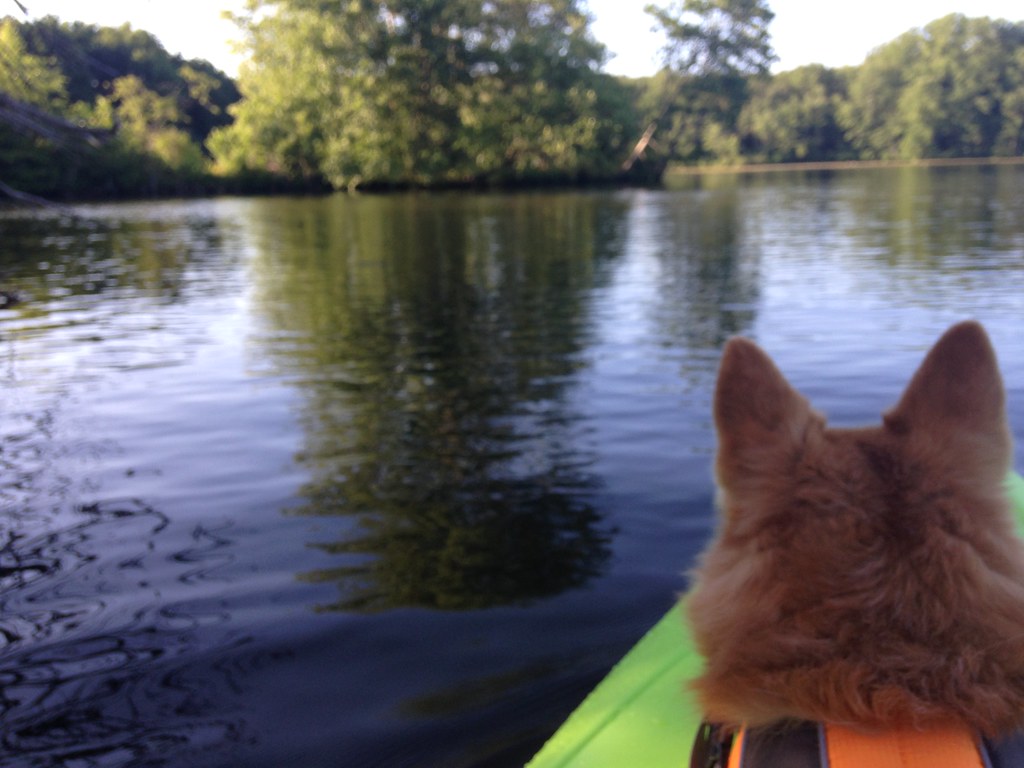 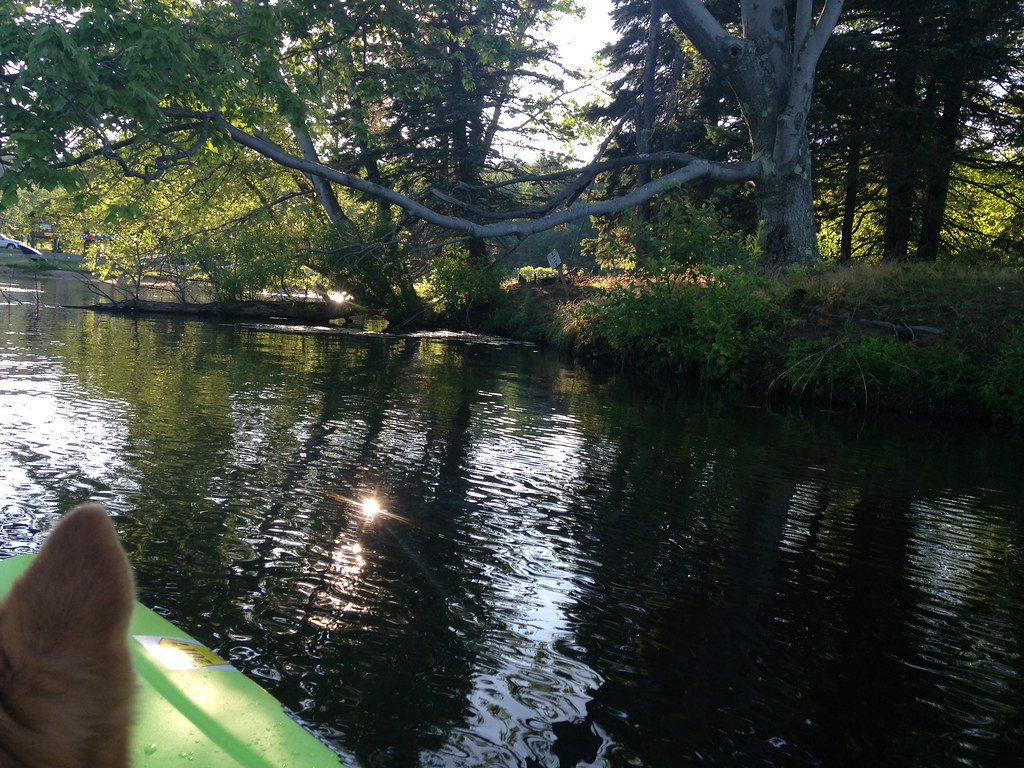 So we are getting to be old pros out there on the water!  When time permits I would like to give river paddling a try.   There are some sections on the local river that don't have too strong of currents that I would be able to paddle upstream and then float downstream again.   I love this fun new way to enjoy nature with Ein.  I am absolutely treasuring our time on the water, and another chapter in my life with this incredible little dog.  We have done so much together.
Posted by dogbird daily at 9:38 PM