Yesterday Ein and I attended a Cynosport Rally trial (in a land far, far away.)  Just kidding...it was northern New Jersey and only two hours away.   Of course when I am traveling further than usual, I have to look up fun geocaches.   One en route was a "challenge" geocache, you could only sign if you had filled your "81 D/T Grid" and if you had found 10 or more types of geocaches.   As of this year, that's me - so it was exciting to get another high rating geocache find for those accomplishments.

The next one, very close to the trial site, was a webcam geocache.   Very rare!   It was at a university and it was very easy to find once I battled through traffic and found the correct entrance.   This is my second webcam geocache (the first was at Rehoboth Beach on the way to Poodle Club of America.)  These geocaches are no longer allowed to be created, but the existing ones are grandfathered in.  You go to the location of the livestream camera that matches with the coordinates and get a friend at home who is watching the livestream camera to take a screen capture.   Or, just open the web page on your smart phone and take a screencap.   Easy peasy!

Now onto the fun stuff.   We arrived just as the stewards were setting up the first Level 1 course.  This double trial was set up so that Levels ran back to back.   Because of this, I opted to do all 6 runs.   Ein and I have not done all 6 runs in nearly three years and it was not a decision that I took lightly.  I think six runs in a day is a whole lot for any dog, and especially so for an arthritic senior.

But Ein held his own.   There was a competitive bunch of dogs in the B classes, young dogs in their prime laying down 210s on every run.  Ein got a 209 and 207 in the 1B, a 204 and 209 in 2B, and a 207 and 205 in 3B.   I had to laugh because we kept losing a point on a crooked left finish.   In his second Level 1 round I made the mistake of only using a verbal to cue him down when he was pointed straight at ringside.   I should have given him the extra support and motion of a hand signal as well - I had to recue him.   The 204 was due to some pretty far away fronts and that stinking left finish. 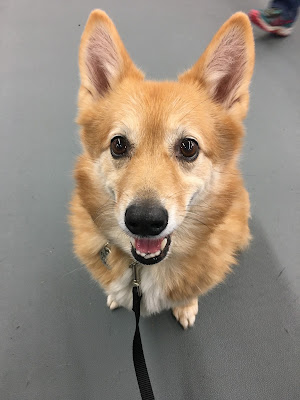 Otherwise, so many super moments that I am so proud of him for!   The first Level 3 course in particular had a lot of the more challenging/fun signs.   The drop on recall, the signals and the retrieve!   Sometimes I see many of the more challenging signs left out of Level 3 courses so it was fun to be able to show off the exercises that we have worked hard on.  On Ein's retrieve the judge was standing closer than he likes to the dumbbell.   He sent out fast and he picked it up!   When he turned he paused and gave the judge a stare but then he came and ran to front with his DB.  Held it like a good boy.   Wow!    Talk about all of our hard work paying off - that was huge for Ein.   Retrieving with a person nearby has been so hard for him.   (And it made me glad I took him to Tractor Supply Co this week to work on his retrieves and go outs!)

I did notice Ein was tired by the last run.   He was getting up slower from his downs and there was this particular long stretch of heeling to the back of the ring that he didn't seem to enjoy.   It made me very glad that we work hard on his general fitness and muscle tone, that he still goes for walks.   It is so important for senior dogs to not lose their muscle mass - and I think it made so much of the difference for Ein yesterday.   There was a lot of jumping and downs - it was taxing.   There were many moments where you could choose "finish or forward" and we just heeled forward so Ein wouldn't have to do a lot of sits.   When we got home I gave him a rimadyl and treatment with our Equine Light Therapy pad on both hips and spine.   This morning he looks great, no stiffness and moving great.

That was encouraging for me.   Double trials at three runs each are not going to be a common theme for us in our quest for the final 6 Triple Qs we need for Ein's ARCHMX.   But it was nice to see Ein meet the challenge with strength and joy, even if we were both tired by the end.

Posted by dogbird daily at 7:17 AM