By Land and Sea

Yesterday found us out on the Gamelands walking the trails and actually repeating a multi-cache that I had enjoyed in the past.   I repeated it because it took you on a nice loop-tour of this particular Gamelands and that was what I was interested in doing.

Bonus: there was not a single soul out hiking except for me and the dogs.   And on a gorgeous Sunday on Memorial Day weekend, that was exactly what I was hoping for.   Perri got to be off leash the entire time and is doing well with recalling off of crittering - another new project for us since over the last year we have had a handful of (new behavior for Perri.) incidences of completely disappearing.   I have started filling the treat pouch with very high value food and giving Perri some every time she checks in with me on her own, and bonus for recalling off of chipmunks or other crittering expeditions.   Initially it took her a while to respond, and I still rewarded her.   Twice yesterday she made me laugh by actually recalling and sitting in front position!   We still had some slow-to-respond recalls but I'm definitely noticing a faster response - especially when I immediately release her back to the critters after feeding her.

Molly had her second hike on the Flexi leash and that is going well for us.   Molly just stays on the leash and that's how we roll, but the Flexi leash is making that nicer for us.   I hate dealing with long lines - and this particular Flexi is probably an elderly fifteen years old and has not snapped, lacerated anybody's flesh or failed to lock when I want it to.   Imagine that!    It's working well for us. 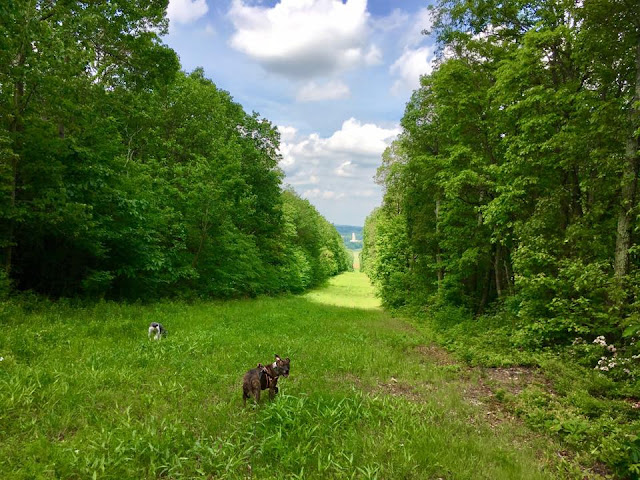 And then we finished a good two hours and the girls were hot and thirsty.   I'm not kidding, this was the only water source in the whole Gamelands besides the Nalgene water bottles I had brought along. 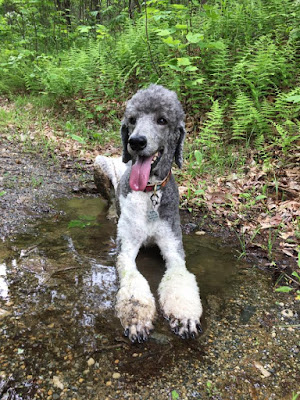 Perri gave it a good SMACK! with her smackin' paw to try to bring forth more, but nothing happened.   Molly wouldn't even think about drinking out of it.   But then, Molly isn't very smart about staying hydrated while hiking. 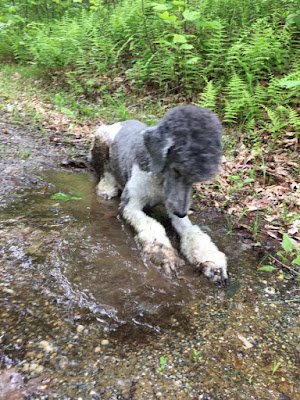 We went to French Creek Park in search of a good lake swim.   I think the entire population of Eastern PA was at that lake!  Just not in this photo because I'm a wizard. 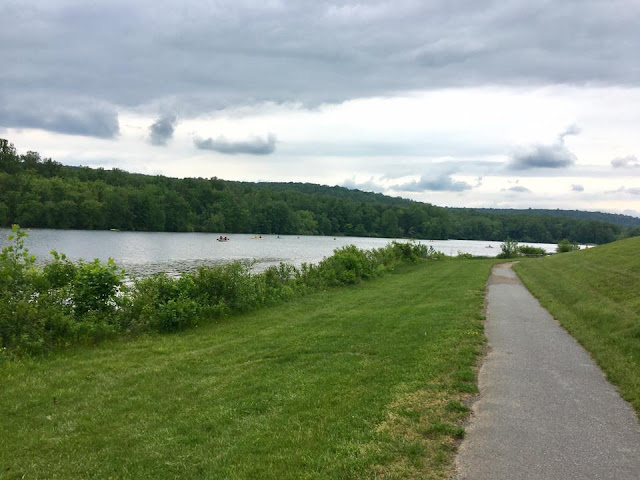 I'm also a wizard for finding swimmin' spots for the dogs and after we hiked up the lakeside trail for a while, we found a nice fishing trail into the lakeside and let the games begin! Next thing you know, some hideous creature rose from the depths of Hopewell Lake to shut Perri's relentless barking up. Just kidding, it was only Molly! And she never does anything about Perri's barking. Or anything about her pouncing Or her silly dumb faces Posted by dogbird daily at 3:35 PM